BOOK: Excellent Emma
2.52Mb size Format: txt, pdf, ePub
Read Book Download Book
ads
“They think we’re too fat,” Stanley announces gloomily. “That’s why they’re punishing us.” Stanley is a little pudgy around the middle, I guess, but I would never call him fat. Not out loud. And anyway, a bunch of the kids in our class are skinny, so it kind of evens out.
“They can’t make us do stuff we don’t want to do,” Cynthia announces, raising her hand mid-sentence. She folds her arms across her chest. “
I’m
not too fat.”
“Don’t be silly,” Ms. Sanchez says to everyone, scowling. She is obviously not at all happy that Mrs. Jakes’s so-called exciting announcement has been met with such suspicion.
Mrs. Jakes looks as if she wishes she could turn back time and say things in a different way, but she doesn’t know how.
Well, turning back time is impossible, for one thing.
“For heaven’s sake, boys and girls!” Ms. Sanchez exclaims. “The parents are going to a great deal of trouble to make this new event a success, and it’ll be fun for you. Just because it will actually involve
moving around,
weak ankles or not, instead of eating fast food or playing video games, that’s no reason for you to give Mrs. Jakes and me all this attitude. 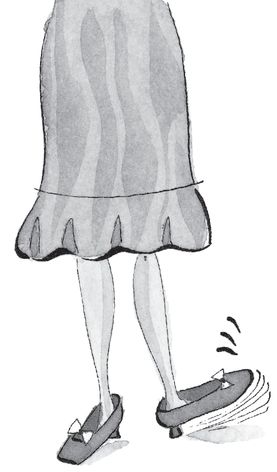 You kids are going to participate in Oak Glen’s First Annual Winter Games Day, and you will like it!”
Annie Pat and I exchange looks.
Wow,
we are saying silently to each other.
Is that a threat or a promise?
Naturally, we don’t ask this question out loud, however, because Ms. Sanchez—who hardly ever gets mad—is
angry.
Her cheeks are pink, and her brown eyes flash, and one foot—wearing a pointy brown shoe with a cute leather bow on it—is tapping pretty hard.
No one else is reckless enough to say anything, either.
Except for Fiona. “I really do have weak ankles,” she objects. She holds one leg up as a visual aid, and we all stare.
Her ankle does look kind of flimsy, now that she mentions it—like a pink pipe cleaner with a lime-green sneaker stuck on the end of it.
“Well, Miss McNulty,” Ms. Sanchez tells her, “you’d better get those ankles pumped up, and pumped up fast—because Winter Games Day is going to come rolling around next week whether you children want it to or not.”

A couple of kids wriggle in their seats, but that’s as far as they dare to go with their objections. The rest of us just stare at our shoes.
“Now, I want you to give a big Oak Glen thank-you to Mrs. Jakes for taking time out of her busy day to bring us this good news,” Ms. Sanchez says in her best
I’m warning you!
voice.
“Thank you, Mrs. Jakes,” a few of us manage to chant.
“You’re welcome, everyone,” EllRay’s mom says, and she leaves the classroom as quickly as she can while still being polite.
Then the bell rings, and we all slink out of the room.
And EllRay is the slinkiest of us all, because it was
his mom
.
5
In Training
“You’re up early for a Saturday morning, Emma,” Mom says a few days later, pouring herself some coffee. Coffee always looks so good, all steamy in the morning sunlight, but it tastes awful, which I know because I tried it once. “And you’re already dressed, surprise surprise,” she adds. “What would you like for breakfast?”
My mom is really nice, and she’s pretty, too, even though she’s almost thirty-five years old. She has short hair that waves up like the back end of a curly-tailed mallard duck, and she likes to wear necklaces. When I was little, I made her a dyed macaroni necklace once, orange and blue and lumpy—even
I
thought it looked kind of weird—and she wore it to work! Of course she worked in a business library then, so not too many people saw her.

Still.
“I’d like pancakes and oatmeal, please,” I say, doing some stretches before sitting down at the kitchen table. I tuck my napkin into my jeans so I won’t have to scramble around on the floor looking for it in a minute or two. Somebody should invent magnetic napkins, that’s what I think.
“Pancakes
and
oatmeal?” my mom asks, raising an eyebrow. “Good heavens, Emma. Are you about to go into hibernation?”
“Nope,” I tell her. “I’m about to go into
training
—with Annie Pat, only she doesn’t know it yet. There’s going to be a games day at school next Friday, see, and Annie Pat and I are going to
rule
. We have a head start, because we’re already skinny. I’m going over to her house right after I finish my chores, if that’s okay, and we’ll go to the park so we can practice.”
The pancake mix is already halfway out of the cupboard, but Mom stops and frowns. “Back up a second,” she says. “Skinny? I got the e-mail memo about Winter Games Day yesterday, Emma, and it didn’t say anything about kids having to be skinny. In fact, that’s not the idea at all.”
“Huh,” I say politely. Because that’s the kind of thing grown-ups tell you even when the opposite is true.
I know that Annie Pat must be as excited about games day as I am, because she loves prizes and awards of any kind. In fact, one whole corner of her bedroom is full of the things she’s won: a little “Congratulations!” trophy from when she graduated from preschool, her “Sweetest Smile” certificate from kindergarten, her “Perfect Penmanship” award from first grade, and the “Most Improved Spelling” award from second grade. 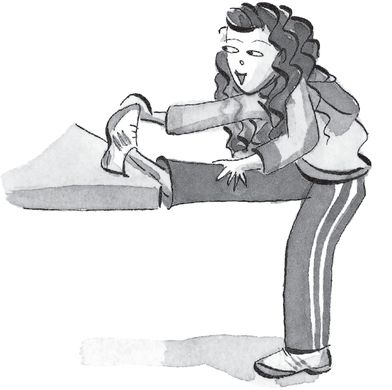 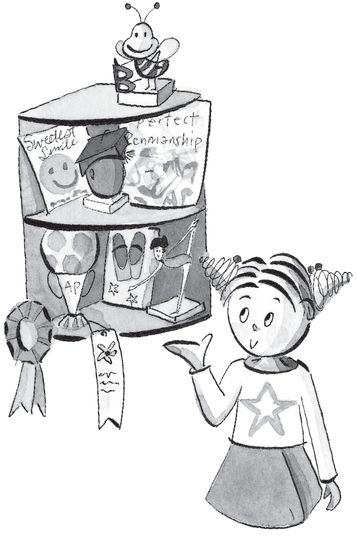 And that’s not even counting her prizes and ribbons and plaques from pre-ballet, gymnastics, soccer, and summer camp, where she got an award with glitter on it for “Best Dog Paddle.”
Annie Pat has led a very accomplished life so far.
Not me. I just have one second-place ribbon from the second-grade spelling bee at Magdalena, and one certificate from Parks and Recreation—near my old house—for being able to tread water for two minutes without drowning. But they spelled my last name wrong: Macgraw, not McGraw.
It was still me gasping and splashing in that swimming pool, though.
“Well, of course, there will be prizes—for the winners,” Mom says, flopping some pancake mix into a bowl. “But really, Emma,” she continues, temporarily stalled in her pancake-making project, “at the end of Winter Games Day, everyone is supposed to end up feeling more positive about exercise, and realize how good it makes their bodies feel. Whatever size they are,” my mom adds, frowning a little.
“I guess you’re right,” I say, as if she has just totally convinced me that fat or skinny, fast or slow, winner or loser, prize or no prize, everybody at Oak Glen Primary School is going to be perfectly happy at the end of its First Annual Winter Games Day.
Hah.

Two hours later, my mom and I have finished our Saturday chores. We changed the sheets and towels, did a few loads of laundry in our horrible condo laundry room that smells like a combination of bleach, yucky-sweet fabric softener, and cat pee—even though no one is allowed to have pets, so that smell is a mystery. We also watered all the house plants and cleaned out the refrigerator, even the vegetable drawer, which sometimes has scary-looking bags of green goo hiding in the bottom.

NF (1995) The Pillars of Hercules by Paul Theroux
Finn's Golem by Gregg Taylor
Pursuit of the Zodiacs by Walsh, Nathan
Jaxson by Kris Keldaran
Shadow's End by Thea Harrison
The Pleasure of Sin by Shauna Hart
Grave Danger by Grant, Rachel
One Past Midnight by Jessica Shirvington
Master of Sin by Maggie Robinson
Curves and the Rancher by Jenn Roseton
Our partner