BOOK: Excellent Emma
7.58Mb size Format: txt, pdf, ePub
Read Book Download Book
ads
It would have been Corey who came in first or second, considering his champion swimming muscles, but the boys in the first batch of kids were trying so hard to win that they kept tripping each other up and grabbing each other’s dead bug caps and Native American warrior kerchiefs and crashing into each other during the race.
There’s a lesson there, but I’m not sure what it is.
So now, Corey is mad at Jared and EllRay, and Jared is mad at—well, just about everyone, I guess.
I am in the second batch of kids, and I am hoping there will be another kid-tangle in the middle of the race, because that’s my only hope of winning. And that’s exactly what happens! Cynthia trips—on a blade of grass, I guess, or on one of her pure white shoelaces—and stumbles into Stanley Washington, who goes down like a giant tree that has just been hit by a bolt of glittery pink-and-lavender lightning. And three other runners pile into them, so there’s a mountain of kids yelling and arguing on the lawn as Kevin and I cross the finish line. 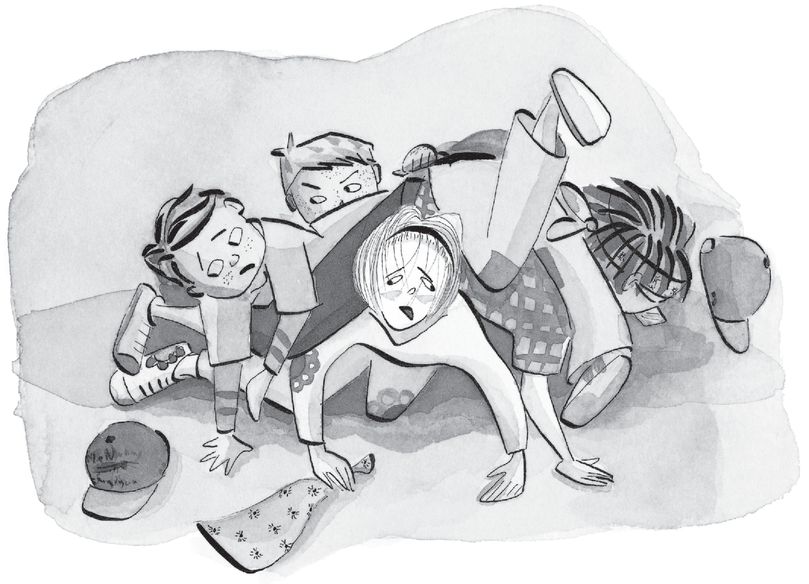 Kevin again. But at least I came in second. I get to race in the run-off!
I wish my dad was here to see this.
So now, it’s just Kry, Heather, Kevin, and me. The parents—including my mom, who bought a disposable camera at the supermarket just for Winter Games Day—move in close to take a few pictures of this historic event.
I can tell that Annie Pat is totally in shock that she hasn’t won any prizes yet, after I got her hopes up and everything. She doesn’t even look at me, much less wish me good luck, and that hurts.
Annie Pat is not being a very good sport. I guess it’s easier to be a good sport when you’re winning than when you’re losing, but
still
.
“You better not win,” I hear Cynthia whisper to Heather. “
Loser
.”
“You better not win, either,” Jared tells Kevin. “
Loser
.”
That’s just not right. Also, it doesn’t make any sense, because Heather and Kevin are both doing
great
today—much better than Cynthia and Jared, that’s for sure—so how can they be the losers?
But I can’t figure that out right now, because it’s time to race.
“On your marks, get set,
go
!” Ms. Sanchez shouts in her ladylike way.
And I run—like a deer! Like the wind! Like I am in a swamp, and there is an alligator scrambling after me, its mouth gaping wide! Kry runs faster, of course, but who cares? I come in second! 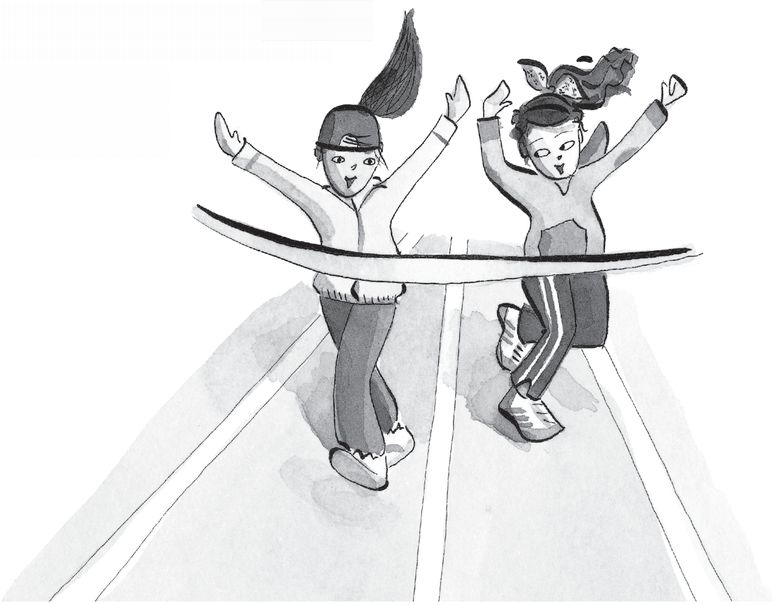 “Congratulations,” Kry says, and she shakes my sweaty hand.
“Thanks,” I manage to say. “Same here.” And I am still busy catching my breath as I wonder how I can make things right again with my sad best friend Annie Pat, who is usually the most cheerful person I know.
Or she was until that baby came along.
I feel some of my triumph trickle away, but just a little, because—
I’m actually going to get another prize.
And I can tell my dad all about it next time we e-mail each other.
I don’t have to reveal every little detail.
“Congratulations, Kry and Emma,” Ms. Sanchez says, beaming a smile our way. My ears are buzzing as I step forward so my mom can take my picture.
I won two prizes
, even though one was for coming in second. I cannot believe it. I have officially doubled the number of prizes in my room!
“Now, gather ’round, children,” Ms. Sanchez is saying. “Because it’s time for our final fun event, and then we’ll all enjoy the lovely refreshments your parents have been kind enough to bring. Nice healthy carrot sticks, and cherry tomatoes, and apple slices, and string cheese, for those of you who are not lactose-intolerant, and a pitcher of nice cold water. But first, I need you to pay attention, because this might seem a little complicated.”
12
The Good Old-Fashioned Three-Legged Race
“Listen carefully, girls and boys,” Ms. Sanchez calls out as we are herded into a group by Mr. Timberlake and a couple of the parents. “This last event is the good old-fashioned three-legged race,” she says, clasping her hands together. Her engagement ring flashes in the afternoon sunlight. “That means two kids run together as partners,” she explains, “and each kid has one leg tied to his or her partner’s leg. So each set of partners ends up running with three legs. Get it? And it’s not as easy as it sounds. You’re going to have to cooperate with each other.”
Uh, wrong kids, wrong day, Ms. Sanchez. Most of us can’t even stand to look at each other by now. Take me and Annie Pat, for instance.
And—a
little
complicated? Try a lot complicated!
“This sounds dangerous,” Fiona says. But handsome Mr. Timberlake talked to her in private, and he tied a dead bug kerchief around her still-skinny ankle, and she was so thrilled she agreed to participate in this last event.
“Now, you’ll all run at once,” Ms. Sanchez tells us. “And I’ll assign the partners, to save time. EllRay, you run with Fiona. Heather, you’ll run with Cynthia. Jared, I want you to run with Stanley. And Kry, you run with Kevin.”
Uh-oh. She’s pairing up kids totally at random.
“And Emma,” Ms. Sanchez says, “you and Annie Pat will run together.”
Oh, no
. Annie Pat? Who didn’t even wish me luck? Annie Pat, who is acting like she’s sorry I am winning even though she knows why I need to?
Annie Pat raises her hand. “Ms. Sanchez? Ms. Sanchez?” she says, pleading.
She is going to beg to be assigned to someone else.
I could never forgive her for this, so I will beg
first.
“Ms. Sanchez?” I call out, waving my arm wildly in the air.
“No time to chat, ladies,” Ms. Sanchez says, shooting us a simmer-down look. “In fact,” she adds, “I’d like you to give us all a quick demonstration of how to run this race, after one of the parents—Mrs. Jakes?—ties your inside legs together.”
This doesn’t take as long as I wish it would.
Annie Pat and I refuse to look at each other.
“Go!” Ms. Sanchez shouts.
And I start running, but Annie Pat is still adjusting her green shirt. “Ow!” we both yell, falling onto the grass in a big wad of tangled brown hair, two red pigtails, three legs, and four arms.
Then we try to stand up, which is even worse, and nearly everyone on the sidelines is laughing at us. Even baby Murphy! My mom tries to hide her giggles and look encouraging. She gives me a thumbs-up. 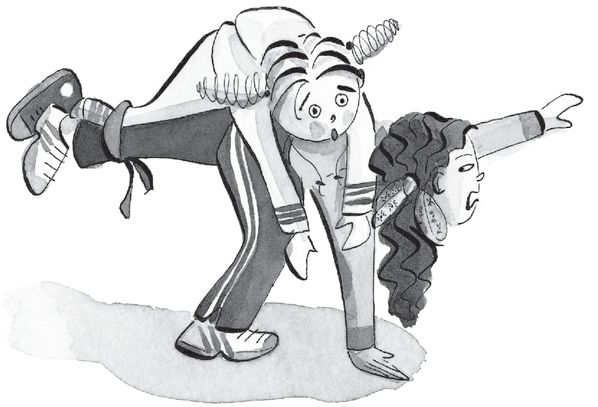 “Listen,” I mutter to Annie Pat. “Just go when I say go.”
“No,” Annie Pat says, stomping her outside foot. “You go when
I
say go, for a change.”
Did I mention before that Annie Pat can be stubborn? Or even
impossible
?
Well, I didn’t know until three minutes ago!
And I start to run, dragging Annie Pat behind me—but I’m not getting very far.
“Wait, wait, wait,” Annie Pat yells from down on the grass, reaching up to grab hold of my patriotic shirt. “We’ve gotta plan what we’re doing.” She struggles to her feet.
Lots of people on the sidelines are shouting out suggestions, but we don’t listen to them, because I guess this has to be between Annie Pat and me.
“Plan it like how?” I ask.
“Like outside legs, inside legs,” Annie Pat says. “Outside, inside.”
“Okay,” I tell her. “I get to choose how we start, though.
Outside!”
I cry out, and take a giant leap forward with my outside leg.
But Annie Pat just stands there. No matter how many people shout at us, including Ms. Sanchez, Annie Pat will not be hurried. “All those in favor of starting with your outside leg, say ‘aye,’” she says to the air around me.
I wait for her to vote, so I can vote the same way. Because otherwise, we may as well just
move
here! There is no bossing Annie Pat Masterson around. I have now learned this the hard way.
And slowly, slowly, Annie Pat raises her hand.
So I raise my hand, too.
“Those opposed?” Annie Pat asks, looking around—which makes me want to shake her until her teeth rattle, because
who else is there
?
But I don’t shake her, and no one is opposed, so Annie Pat’s motion passes.
“Well, maybe we’d better get going,” I tell Annie Pat casually, as if a bazillion eyes aren’t watching our every move. “You say when.”
“Okay. Hook your arm over my shoulder,” Annie Pat says.
“When!”
she cries. “Outside leg, inside legs. Outside, inside!” And once we get the rhythm right, we start flying, and laughing, and we’re as good as gold.
And that’s better than a silver cup any day of the week!

It is time for the
real
three-legged race, and all the kids in my class are lined up at the starting line, including Heather and Cynthia, Kry and Kevin, Jared and Stanley, EllRay and Fiona, and Annie Pat and me.
Tied-
up, is more like it!
“I hope I don’t make you lose, Emma,” Annie Pat whispers just before Ms. Sanchez blows her whistle. “I wish you could do this without me. I know you really need to win, because of your dad and everything.”
“Don’t worry about it,” I say. “I wouldn’t want to do it without you even if I could.”
I wish I could tell her that I think we already won, but I can’t exactly figure out how to explain it.
Twe-e-e-et!
“Go,” Annie Pat and I say together, and off we lurch,
swing-bump, swing-bump, swing-bump
, across the lawn, laughing so hard we can barely run.
Kry and Kevin take the lead early, and they look like they’re going to keep it, streaking across the grass like the fastest three-legged animal in the world.
But then EllRay and the miraculously cured Fiona whiz by Annie Pat and me like a three-legged cheetah, and I wonder if
they’ll
be the winners.
Whatever happened to Fiona’s weak ankles? What a faker!
Jared and Stanley struggle to catch up with EllRay and Fiona. They thump across the lawn like a wounded—but cooperative—hippopotamus.

Naked Moon by Domenic Stansberry
Maxwell’s Ride by M. J. Trow
Empyreal: Awaken - Book One by Christal M. Mosley
White Ghost by Steven Gore
Shark Tank Jump Start Your Business: How to Launch and Grow a Business from Concept to Cash by Michael Parrish DuDell
Prey of Desire by J. C. Gatlin
Bound to the Beast: Russian Hitman Romance by Stone, Ada
One Night with Sole Regret 02 Tempt Me by Olivia Cunning
Annie's Adventures by Lauren Baratz-Logsted
The Death Ship by B. TRAVEN
Our partner