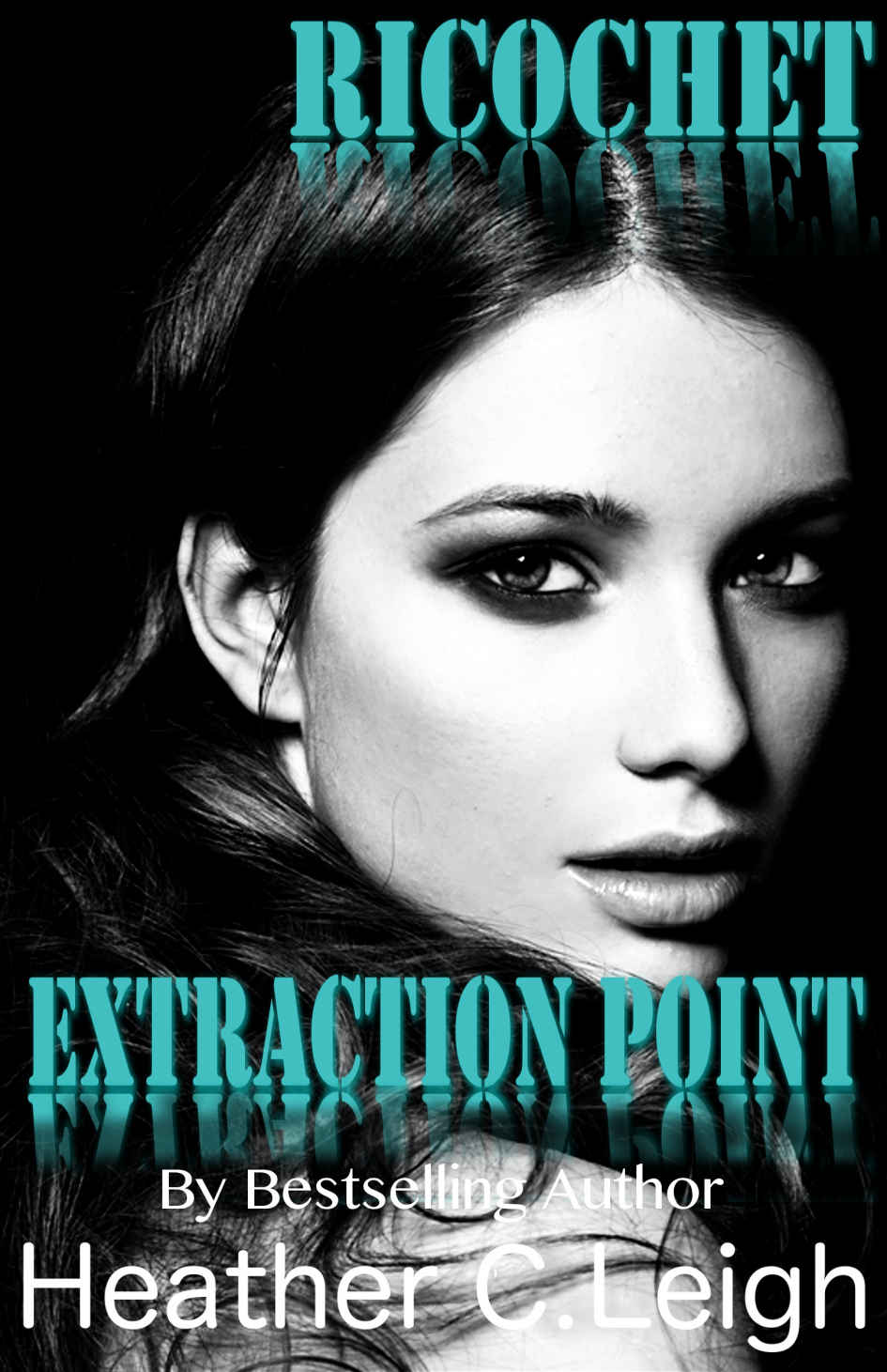 Published ebook use only. All rights reserved. This book or any portion thereof may not be reproduced or used in any manner whatsoever without the express written permission of the publisher except for the use of brief quotations in a book review.

This is a work of fiction. Names, characters, businesses, places, events and incidents are either the products of the author’s imagination or used in a fictitious manner. Any resemblance to actual persons, living or dead, or actual events is purely coincidental

Extraction point
– (n.) the location designated for reassembly of forces and their subsequent transportation out of the battle zone.

Choke
– (n.) a generic term used in grappling to explain the restriction of blood to the brain as a result of pressure being applied around a fighter's neck. (v.) To check or hinder the growth, development, or activity of a living organism.

Annette Quinn (Wallace) Hardy
- ran from abusive husband. Father, deceased, was in the Marines with Mack. Receptionist at Sanctum MMA.

Quinn struggled to open her eyes, a thick, blurry haze making them too heavy to manage more than a slight crack in her crusty eyelids. Once she did, it was too dark to see much of anything.

When Quinn stirred, her head throbbed to a staccato beat, pulsing painfully with the rhythm of her heart. Swallowing down the nausea that played with the edges of her vision, she adjusted to the dim lighting in the room. Quinn caught a glimpse of shadowy pale yellow walls, the outline of a whitewashed dresser opposite where she lay on a full-sized bed. Her eyes shifted, taking in the small window with the faded lace curtains.

My bedroom. I’m in my bedroom.

Quinn was so disoriented and confused she didn’t know what to think. Her frame of reference was skewed in a way that reality and dreams seemed to become one. She had no idea what was going on except for the tremendous pain she felt in every part of her body.

The sound of footsteps downstairs let Quinn know that she wasn’t alone in the familiar house.

“Daddy?” Her voice was a hoarse whisper.

Oblivious to her presence, the heavy booted feet trudged through the tiny house, stopping in the kitchen below her bedroom. Those are daddy’s footsteps. She’d recognize them anywhere. Even though he left the Marines, he still wore combat boots every single day.

Quinn cleared her raw throat and called out louder this time.

This time, she heard the footsteps stop and redirect, heading towards the staircase. The wooden slats creaked under the boots as they ascended to the top of the landing.

Quinn tried to sit up, shifting on top of the ruffled white and yellow comforter. When she went to brace herself on one hand to push upright, something was wrong. Woozy, Quinn fell back onto the pillows, the room spinning in the low light.

The door to her room swung inward, a dark figure outlined in the brightly lit opening.

“Daddy, my… my hands are tied together. I don’t understand. My head, it hurts so badly. What’s going on?”

The bedroom light clicked on, the brightness so intense Quinn had to squeeze her eyes shut and swallow down another wave of nausea. Carefully, she opened her eyes and took in her childhood bedroom. The fog began to clear and the horrific realization of what was happening came together, jolting through her like a bolt of lightning.

That cant be daddy, he died years ago.

Panic flooded her veins with adrenaline, her heart speeding up so fast she thought it might fly right out of her chest. Quinn could barely keep her eyes open the pain in her head was so sharp.

“You can certainly call me daddy if you want to, bitch.”

She shook at the sound of that voice— a voice belonging to a man that haunted her dreams every night for years. Fear prickled across her skin as she froze in place. Without moving an inch, her eyes found the figure standing in her doorway. She would recognize him anywhere.

I’m already dead
, Quinn thought as her vision wavered, his disfigured face was the last thing she saw before everything went black.

The parking lot at Sanctum MMA was crowded for a late Sunday afternoon. Every single available operative was present and accounted for, all of them waiting on Ricochet Brennan, who was pacing in the hall until he could calm down enough to speak without flying into a frenzy.

Rick leaned against the wall, pressing the heels of his hands against his forehead.
Ex-fucking husband.
A sheriff. Who used to beat Quinn regularly according to Mara, who said she heard about it directly from Quinn. The urge to kill the man was so strong, Rick wanted to punch the wall just to let out the homicidal rage that was building inside him, begging to be set free.

Get your shit together, Rick. You can’t help Quinn if you’re imaging all the different ways to destroy that piece of shit motherfucker instead of focusing on finding her.

Inhaling deeply, he flung door to the conference room open, the frame rattling as it banged against the wall. Rick stormed past the table, headed for the far end, which was nearest to the large whiteboard mounted behind the table.

Agitated, Rick slammed a manila file folder down onto the table, taking out a stack of papers and shoving them at Clint, who was on his immediate left. “Everyone take one and get a good look at the bastard who kidnapped Quinn. You should also have the same photo on your handheld device or phone.” He knew he was being a dick, but could give a fuck less. Quinn was missing, taken by a sadistic, abusive asshole, and there was no way he was going to worry about pleasantries at a time like this.

Jesus fucking Christ, I need a fucking drink to deal with this shit.

Rick’s lip curled up when he glanced at the picture of Travis Hardy, a name he hadn’t even heard of until a few hours ago. A man Rick never knew
existed
until a few hours ago when Mara Paxton filled him in on all of Quinn’s secrets. The secrets Quinn didn’t want him to know, that she wasn’t comfortable enough to confide in him. The paper in his hand crumpled in his tight fist for his failure to keep her safe.

I’m going to catch that bastard and skin that sick fuck alive!

“Rick, calm down. Getting angry won’t help Quinn.” Clint’s composed voice did little to assuage Rick or his murderous thoughts.

Rick twitched with a fury he could no longer contain. “Calm down! That fucking abusive, piece of shit has her, Clint! He could be doing—” Rick couldn’t finish his sentence, nearly doubling over from the invisible punch to the gut. It was too painful to think about what horrors Quinn could have already faced at the hand of her husband. He braced himself by placing his palms flat on the conference room table, hanging his head down as he took deep breaths.

I should have told her I love her… taken the chance. Maybe she wouldn’t have left this morning if I had.

“Rick! Let’s start the briefing.” Mack’s voice rang loud and clear from the back of the room by the door. His commanding tone snapped Rick out of his destructive thoughts but the anger remained, simmering under the surface of his poorly masked emotions.

Nodding stiffly at Mack, reining in his emotions, Rick uncapped a marker and began to write on the board. He exhaled deeply before speaking. “Okay. We know that Quinn most likely arrived at the Law Offices of Wheeler, Bryant, and Townsend between ten-fifteen and ten-twenty this morning. Tucker is checking nearby traffic cams to find Mack’s truck to verify the exact time.”

He scribbled the information on the board, the red marker squeaking as it slid across the slick surface.

“Our most likely suspect is Travis Garrett Hardy, deputy sheriff in Bexar County, Texas, which contains the city of San Antonio.” Rick’s face twisted into a scowl as he spit out the man’s name. “You all have his DMV picture on your sheet. We also know this piece of shit owns a home in the next county over, in…” he checked the file even though he knew all of the words on it from memory, “Bandera County. Sparsely populated, out in the middle of nowhere. It’s the perfect place to keep someone under your thumb without anyone knowing about it.” The marker continued squeaking across the white board. “However, they couldn’t have gotten back to Texas yet if that’s where he’s headed, so we’ve pulled a favor from a local guy Mack knows—former Green Beret. He’s sitting on the house to see if they show up.”

Rick scanned the room to see each of his coworkers studying the driver’s license photo in front of them, memorizing the handsome face that hid a monster. His chest suddenly burned with a rush of emotions he felt for his teammates. Every man here was not only willing to put their lives on the line for him whenever they went in the field, they were also willing to do it for Quinn without a moment’s hesitation. They truly were a family in every sense of the word, and they accepted Quinn as theirs, no questions asked. As it was, Mara Paxton was at home, inconsolable, feeling guilty for not urging Quinn to discuss her ex with Rick.

The door to the conference room opened before Rick could continue the briefing.

Tucker rushed in, his clothes a mess and his Bluetooth hanging from his ear. His eyes lit up excitedly behind his glasses as he waited for Rick to respond.

“Tell me you got something, big guy. We need good news.” Rick clutched the marker in his hand, waiting for Tucker reveal what he found.

The small, sinewy man ran a hand through his tousled brown hair as he spoke. “I got a make, model, and license plate number.” He turned to address the entire room. “The bank across the street had a couple of cameras. I was able to get shots of a silver sedan pulling out of the law firm’s parking garage at ten-thirty three a.m. It took me a while to clean up the image enough—”

“Tucker! Can you just skip the technical bullshit and get to the fucking point?” Rick growled impatiently at their computer expert and bent over the conference table, his upper body braced on his locked arms. He knew he looked like a man coming unraveled, piece-by-fucking piece. Every muscle in his body seemed to twitch independently.

Tucker froze, his mouth twisted into a grimace. “I’m cutting you some slack for that comment because I know you’re stressed out. But fucking snap at me again and I’ll take your goddamn head off, Ricochet.” Tucker’s light eyes narrowed, his body tensed up and his expression hostile. Even beneath his geeky glasses and hipster clothing it was obvious that Tucker could be very dangerous when the situation called for it.

Rick hung his head in shame, sighing before looking back up at his friend, ignoring the concerned stares of his colleagues as they bounced back and forth between the two men. “You’re right. I’m sorry, Tucker. Good work. Is that all?”