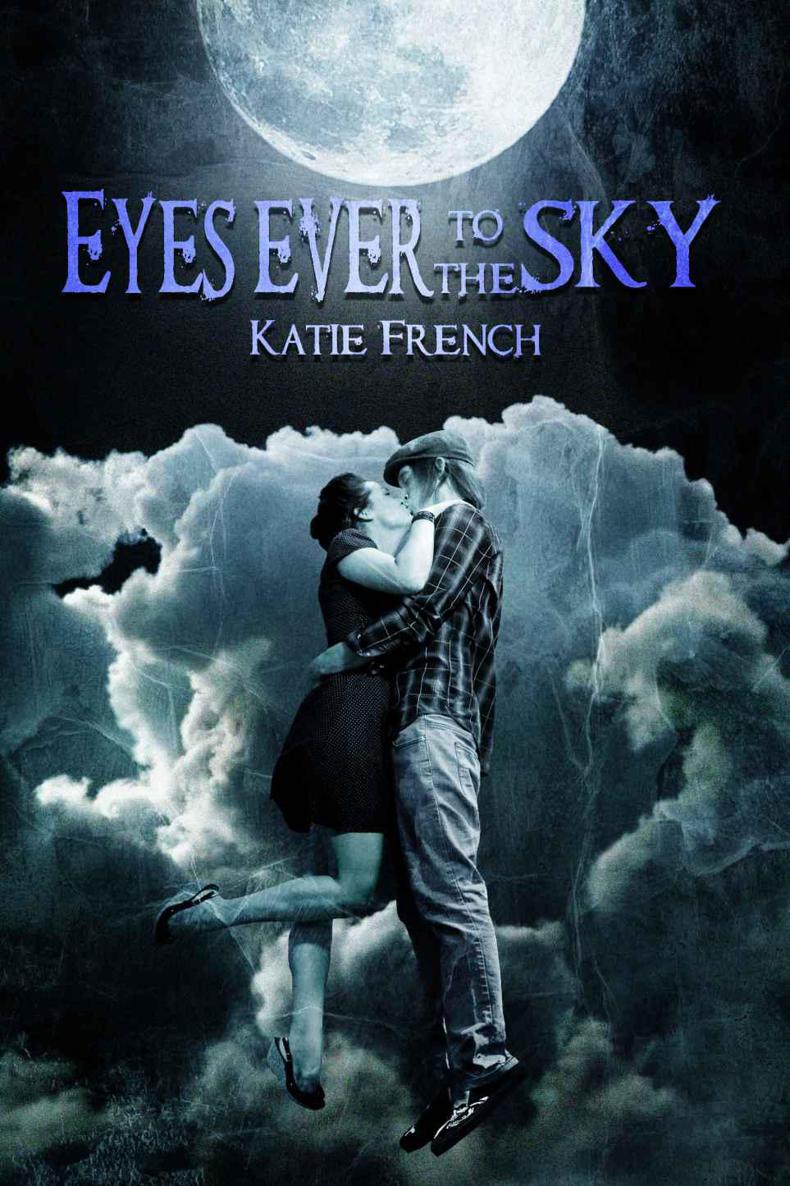 No part of this publication may be reproduced, stored in a retrieval system or transmitted in any form or by any means, electronic or mechanical, including photocopying, recording, or otherwise, without written permission from the publisher. For information visit www.katiefrenchbooks.com

The characters and events portrayed in this book are fictitious. Any similarities to real persons, living or dead, is coincidental and not intended by the author.

To Ryan – You're still the one.

He woke knowing only pain.

His bones ached like they'd been shattered and glued haphazardly together. His head buzzed like a tuning fork. A bitter taste coated his tongue. He searched for the word and it swam sluggishly up before him.
Blood.
He tasted blood.

He peeled his eyelids open to a sea of gray. As his eyes focused, he realized he was lying on his back looking up at the night sky. A few thin clouds streaked across a yellow crescent moon. A fringe of leaves and branches stood out black against the sky above. He lifted his head and a stab of pain needled through his skull. He winced, waited and propped himself up on his elbows. He looked down at his body and drew in a sharp breath.

He was lying in a large trough gouged into the earth, a crater from the look of things. The damp dark soil splayed up on either side, freshly uncovered. He reached a trembling hand into the dirt. It crumbled into flecks on his fingers, dark brown and loamy. Frightened, he brushed it away and sat up.

He scanned his body for injury: broken bones, dislocated joints, flayed skin. But as his eyes traced his limbs, covered in moist earth, he seemed intact. There was, however, one fact he'd previously overlooked.

Panic snapping through him, he pulled himself upright, digging his fingers into a nest of dangling roots. He had to get out of this hole, this… grave. His other senses were awakening now: a gripping hunger, like he'd never eaten a meal in his life, and an overwhelming sense that everything was very wrong. Like the world had been flipped upside down and he was sent tumbling through space unanchored. Why couldn't he remember how he'd gotten here? Why couldn't he remember… anything?

The cold, raw panic crept up his limbs as he scrambled out of the crater, sending showers of earth into the hole. He laced his fingers into the grass and pulled, dragging his naked chest over the coarse, dewy lawn. A puff of wind drove goose bumps over his damp skin. Then he stood and looked.

A park stretched out before him: long sections of grassy plain, cut into squares with chain-link fence. Signs were posted, reading, “Keep Our Park Clean” and “Dogs MUST be kept on a 6 foot leash.” Century-old trees, tall and gnarly, skirted the grassy areas. Branches shifted in the wind making a soft stirring sound. Directly in the center of this quiet and tidy park was a path of destruction cut like a scar through the face of the earth. It was as if something had plummeted from the sky and skidded along the ground, snapping off trees, burning branches, bouncing once at the back of the park where the grass still smoldered. Whatever it was had come to rest here, boring this eight-foot-deep, twenty-foot-across crater into the earth. He peered down into the hole looking for what had caused such destruction. Finding nothing, he shivered and threw his arms around himself.

How had he ended up here?

He stumbled to a picnic table and sat. His head thrummed. His stomach clenched. He’d throw up if he had anything in his belly. He turned his thoughts from his roiling stomach and to the questions stirring in his brain. How did he get here? Where was he? He put his head in his dirt-caked hands.

Hugh
. The name flashed in his head and he grabbed onto it like a life preserver. Was it his name? Could he claim it and pin it to his chest like a name tag? It could be a brand of soap for all he knew, but he assigned it to himself regardless. A name was one step closer to something. And something was better than nothing. He searched his synapses, but the path fizzled and died like the tail of a rocket. Nothing.

He gripped his head in his hands, fighting the terror. Losing the fight.

Headlights sliced through the dark as a car pulled up. A door slammed. Hugh’s head snapped up, his eyes wide. A thought blared in his head, the only thing he knew for certain:
Trust no one.
He couldn't be seen. He bolted upright, teetered and righted himself with a hand to the tabletop. Then he was off into the trees as fast as his legs would take him.

Twice this year Mama had almost burned down their trailer, her forgotten cigarettes smoldering on a pile of magazines or a pizza carton. Cece sniffed the air from where she sat at the edge of her bed. Smoke. She jumped up and yanked the door open, her heart pounding around her chest.

Gazing down the dark hallway, she saw no billowing cloud. She sniffed again and there it was— something more than the Marlboro Ultras Mama chain-smoked from morning until night.

Something was on fire.

Cece thudded down the hallway, dodging piles of clothes. She hurdled a rusted bike tire and a broken toaster which balanced on a faded Barbie box. She plowed over a pile of baby shoes and felt something shatter beneath her foot. Ignoring the pain, she barreled into the living room.

Her eyes tracked past the piles that lined the walls and floor. A particularly precarious stack of crinkled magazines leaned against one wall. The kitchen table was now a buried artifact which could only be dug out by the careful removal of piles of clothing, frying pans and stacks of mail and bills. Worry hit her as she spied the fresh stack of bills. No wonder their propane had been cut off. How long before the electricity went, too?

Mama was the motionless lump on the couch. The TV light made her look skeletal, like a bony husk detectives would find on one of those
C.S.I.
shows she watched. Shivering at the thought, Cece looked past Mama, past the Home Shopping Network blaring from the screen and scanned the ashtrays for that tell-tale cloud. The acrid tang of burning plastic drew her eyes to the carpet. She spotted the smoke curling in little streamers from the floor beneath Mama’s drooping hand. The carpet was indeed on fire.

Cece ran over and stomped out the butt with her already throbbing heel.

Mama’s eyes flew open. Her arms clutched her chest in newly awoken fright. “Cecelia, what in the name of Saint Mary…” Her Spanish accent was particularly thick when sleepy. She pressed her hand to her chest like it would keep her heart inside.

Cece lifted her foot and inspected the damage. The cigarette butt clung to the bottom of her sock, along with a patch of charred carpet. She ripped off the sock and tossed it toward the overflowing kitchen garbage. Beneath, her heel was red and sore, but intact. No harm done. You couldn't say the same for the carpet, however. The three-inch burn looked like a horrible brown tumor in the beige Berber. Cece blinked at it for a moment. It wouldn't matter, really. You couldn't see the carpet beneath Mama’s junk.

Adrenalin leaking out of her bloodstream, Cece sagged on the arm of the couch. One more crisis averted.

She reached down and patted Mama's tiny hand, like bird bones wrapped in paper.

“Mama, put the cigarettes out
before
you fall asleep. Our firemen aren't half as cute as that calendar Ms. K bought you.”

Mama waved a dismissive hand. “Pah. I wasn't sleeping.” Then she raised a black eyebrow. “Not as cute?”

Cece shook her head. “Not even close.”

“
Damn.” Mama leaned back, letting her eyes trail back to the TV. Her unwashed hair stuck up in the back, a black and gray nest dented from where it lay against the armrest. What would it take to convince Mama to take a shower? Those hot firemen probably.

Cece peered up at the clock. “Mama, it's twelve-thirty. Turn HSN off and go to bed.”

Bed was a relative term in this house. Cece slept in the only bed. Mama slept on the 1980s paisley blue couch. Mama hadn't sleep in her bedroom for two years, and now it was flooded in a sea of yard sale trinkets.

Mama propped herself up on one elbow. Her smoker's mouth puckered, wrinkles fanning her lips. “Twelve-thirty? What you doing up? You have
escuela
.”

Cece dropped her eyes, choosing instead to stare intently at the blue whorls on the couch arm. She'd been out of school and banging around the trailer for three weeks. Mama knew this and yet, Mama didn't. “It's July,” she said delicately. “No school.”

“Oh.” Mama sank back, a mournful look falling over her face. Cece bit her lip and turned away.  It was like a punch in the stomach when Mama got like this. Every time.

Mama nodded, her eyes drawn to the flicker of the TV. “I 'member.”