Read Eyes on the Street: The Life of Jane Jacobs Online

Eyes on the Street: The Life of Jane Jacobs 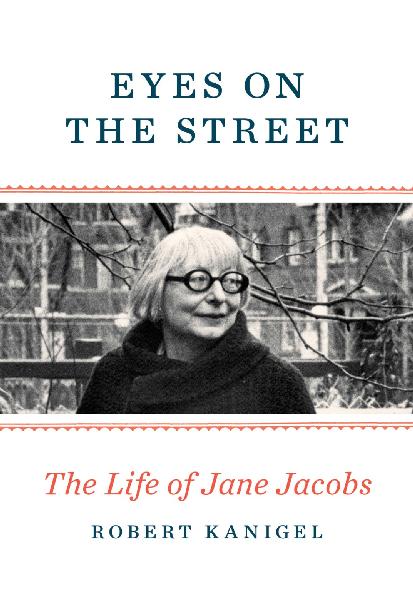 Eyes on the Street: The Life of Jane Jacobs

The first major biography of the irrepressible woman who changed the way we view and live in cities, and whose influence can still be felt in any discussion of urban planning to this day.

Eyes on the Street
is a revelation of the phenomenal woman who raised three children, wrote seven groundbreaking books, saved neighborhoods, stopped expressways, was arrested twice, and engaged at home and on the streets in thousands of debates--all of which she won. Here is the child who challenged her third-grade teacher; the high school poet; the journalist who honed her writing skills at
Iron Age
,
Architectural Forum
,
Fortune
, and other outlets, while amassing the knowledge she would draw upon to write her most famous book,
The Death and Life of Great American Cities
. Here, too, is the activist who helped lead an ultimately successful protest against Robert Moses's proposed expressway through her beloved Greenwich Village; and who, in order to keep her sons out of the Vietnam War, moved to Canada, where she became as well known and admired as she was in the United States.

On an Irish Island

The One Best Way

The Man Who Knew Infinity 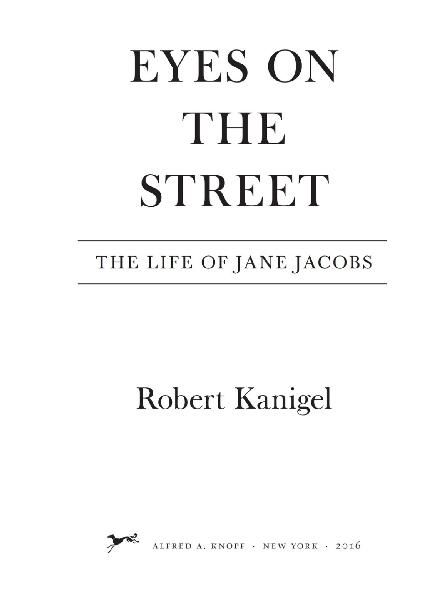 Title: Eyes on the street : the life of Jane Jacobs / by Robert Kanigel.

and all the Calvert Street gang

CHAPTER 1
A Generous Place to Live

CHAPTER 3
Ladies’ Nest of Owls, and Other Milestones in the Education of Miss Jane Butzner

CHAPTER 11
A Person Worth Talking To

CHAPTER 12
A Manuscript to Show Us

CHAPTER 16
Luncheon at the White House

CHAPTER 17
Gas Masks at the Pentagon

CHAPTER 18
A Circle of Their Own

THINK ABOUT
what you’d want to say about Jane Jacobs and it’s hard not to wonder what she’d say right back.

You might not want to get in a debate with Jane; she was sure to beat you. In verbal combat she was overwhelming. When she was in her thirties, before she’d written
The Death and Life of Great American Cities
, she wrote a provocative article for a major magazine whose publisher questioned her reporting. When the two of them met, Jane defended her account with, by one account, “
a screed of facts and firsthand observations.” Later, she asked a sympathetic colleague why he’d not stuck up for her more. “No need,” said he. “The poor man”—the publisher—“thought he’d hit a buzz saw.”

You could say Jane Jacobs didn’t suffer fools gladly, which is true. But you don’t want to say it, because it’s such a damnable cliché, and you don’t want to utter a cliché in front of Jane. You want to be at your best. If there’s a flabbiness to your argument, a want of pointed example, a blurriness of vision, you probably wouldn’t want it to show. Because if it did—around the kitchen table at her home in Greenwich Village, or later in Toronto, or at a public meeting, or among a bunch of academics—she’d just gobble you up. “
There are ways to disagree with Jane Jacobs, but not as many as you might think,” Roger Sale wrote of her in
The Hudson Review
in 1970, “because on her own terms she is almost invariably right
and the real questions arise when you start to consider what she has left out.”

Jane—which is what everyone called her, including her three children—wrote seven books, saved neighborhoods, stopped expressways, was arrested twice, basked in the glow of legions of admirers, and had a million discussions and debates around the kitchen table, which she always won. At least in her later years—though there’s reason to think it went all the way back to grade school—she invariably dominated the conversation. She listened, she responded, she challenged. She thought about what she wanted to say and said it. Not honey coated, not smoothed over. It just came out. Call her brutal, call her honest. Someone once said of her, “
What a dear, sweet grandmother she isn’t.”

Jane was perfectly normal, healthy and happy in all the important ways. She had friends who loved her. She was good to them, kind, and loving. She could be playful, even silly; at least once, she screwed up her face into ridiculous shapes and submitted herself to the camera. When you greeted her she’d throw her arms around you in a tight clasp. She took time out from the writing that was about the most important thing in the world to her to help her children, her friends, her neighbors. But always, she
said what she thought;
she didn’t know how not to. Once, the editor of a magazine she worked for spoke to her when she said what she thought to
The New York Times.
“I believe
you really should not have sounded off…”

Now, it’s fair to ask: Was she always like this? Or was it a personality trait that blossomed over time? Perhaps only after she became famous with her first book? Or, having moved to Toronto, after she became a revered symbol of that city? Were these the affectations of Personality that a prominent person sometimes makes part of him or herself over the years? Or was she always this way?

Jane Jacobs wrote seven books, but is remembered most for one of them,
The Death and Life of Great American Cities
, published in 1961, continuously in print ever since, and heralded as the book that, more than any other single influence, has reshaped how people see cities and what they expect of them. When they talked about it later, readers sometimes made it sound as if
Death and Life
was near to a religious experience for them. That before reading it, they were as they were; then, after they read it,
they were different. That henceforth they
saw
differently. That their Chicago or New York or Boston had been reshaped before their eyes, with a new balance as to what was important and what was not. For many today, certainly, Jane Jacobs verges on a cult figure, with
Death and Life
a kind of gospel, like Chairman Mao’s Little Red Book in its time, or the Bible, or the U.S. Constitution—a repository of revealed Truth. I was among those early drawn to Jacobs through
Death and Life
, which I read in the early 1970s. Its unapologetic assertion of all a city could be at its best, its affirmation of urban sensibilities like those I’d absorbed growing up in New York, and later seen in Paris and San Francisco, was a revelation.

Behind Her Smile by Rosemary Hines
Balls by Julian Tepper, Julian
Unchaste: A Steamy Short Lesbian Erotica by Sandy Blue
A Girl Called Rosie by Anne Doughty
Witness by Magee, Jamie
Bound to Serve by Sullivan Clarke
Beyond the Rules by Doranna Durgin
Anthem for Jackson Dawes by Celia Bryce
Bittersweet Blood by Nina Croft
Suddenly Last Summer by Sarah Morgan
Our partner