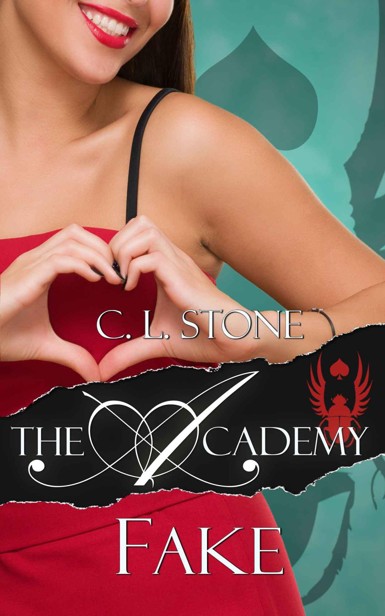 His eyes were telling me we’d get through this, and in the end, he’d be there and he wanted to show me things I never could imagine. Things about him that I still wanted to discover.

“When we’re free of this,” he whispered. “I’ll take you for a ride. Wherever you want.” He leaned closer into me. He stopped just short, his mouth close to mine, close enough that I could feel his breath on my lips.

For the longest moment, he hovered there, as if he were testing me.

All I did was move my head forward an inch until my lips touched his. I couldn’t help it. I’d missed him, feared him dead. I’d already kissed him before, and it felt natural now.

After my touch, Brandon did the rest.

From The Academy Series

Other Books By C. L. Stone

Thank you for downloading this book. Keep in touch with the author to find out about special releases and upcoming events, including spoilers, author chats and swag.

It’s the best way to stay up to date with the latest from C. L. Stone.

I
t’s been two weeks since I’ve seen Wil.

I spent time during the days after returning from Florida helping Corey, Brandon and Marc clearing out the inside of a house in downtown Charleston, making it habitable for a family to move in. From dawn until well after dark, I stripped wood and removed tiles to replace it with carpet, and then spent the rest of my days in a blur, doing whatever they told me to do.

At night, I was so tired, I fell into bed.

Staying focused on work was how I didn’t feel like a failure of an older sister.

I was now in Corey’s room; it had become my retreat.

We’d been waiting for Mr. Blackbourne’s team at the school to find my brother, to make contact, so we could start to follow him. He said we should follow him, because if he was involved with Mr. Hendricks, there could be something Wil was involved in and we needed to know what it was before we jumped in.

Word had it though that Wil had been spotted in the hallways by other students. That was good. At least he was still alive.

I rolled over as I forced out my worries, feeling my sore arms tense and strain before I relaxed.

Sometime in the night, a body materialized next to me. When my eyes opened partially, the outline seemed to be Corey, with his broad shoulders sticking out from under the blanket. How long had he been up at the computer? What was he working on? Lately, he stayed up super late, and often got up before I woke. I’d find him at the computer then, too.

I made room for him at first. But the apartment was freezing; the sheet and thin blanket weren’t enough.

When I couldn’t stand it anymore, I rolled over close, pressing my front up against his back. He wasn’t wearing a shirt. His skin was smooth, warm to the touch. I tried not to be too weird, but I was too out of it and too cold to be overly concerned with personal space.

He turned over, slightly, twisting to talk over his shoulder. “Cold?” The whisper was a little hoarse. I’d woken him.

He moaned, throaty and deep. He flipped over and wrapped an arm around me, pulling me in until I could curl up tight to his bare chest. My cheek mashed up against his skin, right over his heart, cushioned by his muscles, but I could still feel his heartbeat.

“This going to be enough?” he asked in the same tone. “Or do we need another blanket?”

“Mmm,” I said. Body heat would work. I was mildly amused. For a gay guy, he really was adorable and sweet. It was just like a cozy hug.

He didn’t respond. His breathing slowed, settling again. I readjusted my face, and my eyelashes swept across his skin as I was staring blankly at nothing at all.

Some of the guilt had already faded, and I welcomed the numbness in the moment. No one complained about me being here. In fact, they all seemed relieved. It was strange to me to feel like I was wanted somewhere.

But now what was I going to do? I couldn’t just mooch off of them forever. I couldn’t go back to stealing wallets. I needed a real job. I kept telling myself I’d find one as soon as I found Wil, though I’d assumed we’d find Wil sooner than this. Now that it looked like it would take a while, I thought I should perhaps try again.

I tried formulating plans in my head. In the morning I would go here or there and ask about work. If I could earn something, I could pay for my own apartment instead of working for them to earn my keep. It seemed important to do that.

Corey’s heavy breathing became my focus. His slow heartbeat thudded against my face.

There was a click from deeper in the apartment. I held my breath, listening. It was pretty late for one of the boys to still be up. I assumed it was Brandon.

He’d kept his space the last two weeks. All the boys had, for which I was grateful and also sorry for.

I listened as close as I could, but over my breathing and Corey’s heartbeat, it became hard to focus and I started to drift back asleep again.

Until a sudden jolt woke me right up.

I’d once stuck my fingers into the back of an open stereo while it was still plugged into the wall. The shock of it had left my fingertip blackened for a year, I’d been timid around electrical devices for a long time after.

This was a hundred times worse. Wide awake, feeling every volt coursing through me, at the same time unable to move and unsure what had happened. My brain had a disconnect. My body went completely rigid.

When it was over, my only goal was trying to get my lungs to work.

My eyes opened and I was blinded by a bright white light.

And then everything went dark. A cloth fell over my face and my breathing problems from a second ago were nothing compared to this suffocation. The cloth sucked into my mouth at every attempt to breathe in, blocking out the air until all I could do was gasp and hope it was enough to keep me conscious.

A body landed on top of me. I fought, kicking. My first thought, was that this was Raven and I was going to kick his ass. I tried to curse, even though my voice and mouth weren’t working after the shock and the lack of air.

I wanted to kill him.

My next thought was this was Blake Coaltar coming to get me. I’d wrecked his yacht and shot him in the leg and then wrecked his car. I guess I may have deserved it, but I would still kill him anyway.

But the bodies on top of me said absolutely nothing. There was no clue as to who this was.

I flailed, but I was weak, trying to fight off whoever it was but my body didn’t want to cooperate. I was crushed and held down, helpless. My arms were tied together. My legs were tied, too. From the grunting and shifting beside me, it sounded like Corey was going through the same thing.

Tied and blinded, I was lifted. I didn’t stop wriggling, though. My voice box barely managed to work; I got moans out, but being able to scream was beyond my capacity. Air was in short supply

I felt like I was being carried by someone resembling a Mack truck by the sheer size. At first, I was carried like a baby, but after my several attempts to wriggle away and claw at whatever I could, I got thrown over a shoulder. Blood rushed to my head. I was dizzy, disoriented, short of breath. The shock made it harder to fully function and I worried about passing out.

There was an elevator ride and then I was carried through the lobby, their footsteps echoing off the tile, and then we were out in the fresh air, from as much as I could tell since I had the hood on.

“Ugh,” I cried out, which was about as much as I could muster with my gut getting a shoulder stuffed into it.

There was a thud. Corey groaned. I choked. Did they hit him? I’d kill them. Just wait until I had a hand free.

If only I could breathe. With the cloth over my face, I couldn’t get enough air to gain much energy to even wiggle much. I tried scratching it off, but it was stuck to my neck somehow. In my panic, I couldn’t find the way to get it to release.

Where was that stupid security guard?

I flopped over Mack Truck’s shoulder. I clawed at his back, kneed him where I could, but he had a pretty good grip around my torso and thighs.

I only had a few moments before they dumped us into a river, or whatever they were doing.

So I did the most instinctive thing I could think to do. I reached down, pretending to pound at him where I could, striking at his back and butt with my tied arms. Still, my fingers were free.

I felt around for his wallet. His left pocket, from the feel when I slapped at it, was a packet of cigarettes and a lighter. The other one had something harder, square. In the dark, I couldn’t tell what, but another pounding against his body and I had it in my hands. Not a wallet, but a cell phone.

I was hoisted for a moment and then landed in what felt like a trunk. There was utility carpet lined with plastic bags at the bottom.

Oh shit, someone was going to kill us. I’d seen far too many movies to know how a tied and bagged girl in the back of a car ended up. No matter what happens now, we had to get out before we got to the second location. I’d probably be the river, or the ocean… a place to kill us and dump us over.

Another body landed on top of me, forcing out what little air was in my lungs. I was on my stomach, face-planted against the floor.

The trunk door was slammed shut on my feet that had been sticking up, pushing them in at an odd angle.

“Who are these guys?” I asked.