Read Falling For A Redneck Online

Falling For A Redneck 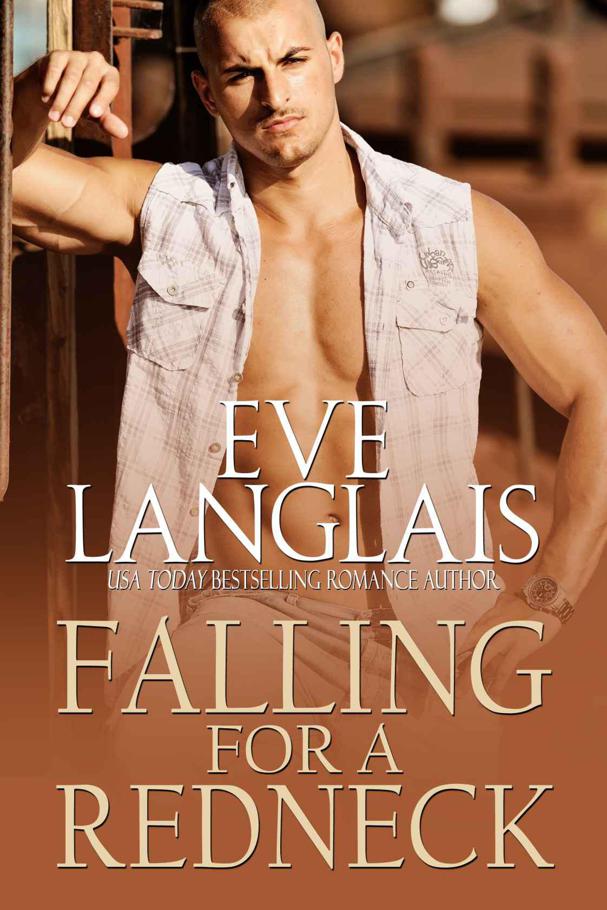 Falling for a Redneck

Falling For A Redneck
is a work of fiction and the characters, events and dialogue found within the story are of the author's imagination and are not to be construed as real. Any resemblance to actual events or persons, either living or deceased, is completely coincidental.

No part of this book may be reproduced or shared in any form or by any means, electronic or mechanical, including but not limited to digital copying, file sharing, audio recording, email and printing without permission in writing from the author.

Falling for a Redneck

Please note,
Falling for a Redneck was originally published by Cobblestone Press as Fire and Ice from April 2011 until May 8th of 2014. Published anew in July of 2014 by Eve Langlais, this book has been slightly expanded from its original version and features a new cover, and title. I hope you enjoy it.
~Eve

Can his fiery touch melt her frozen heart?

He’s paid for his crimes and is trying to go straight.

She’s shed her tears and
uses anger to cope.

They are complete and utter opposites, who don’t just attract, they
explode
.

Will their past be what brings them together, or ultimately tears them apart?

Swearing off men after her husband leaves her for another woman, Marissa turns to domination as a form of anger management. But she ends up punishing the wrong man and finds herself in danger as someone sets out to teach her a fatal lesson of their own. As if she didn’t have enough problems, the redneck from hell moves in next door and proceeds to drive her insane—mostly with his kisses.

A run
-in with the law, not to mention two little boys, have made Dirk see the light. He’s cleaned up his act and is determined to stay away from trouble, but how can he ignore the ice princess next door who makes him want to light a fire in her perfectly creased pants? The more she pushes him away, the more he’s determined to have her—in his bed and arms. He just never expected her to win over his heart.

The whip whistled through the air
then landed with a crack on the bare white buttocks peeking out from a pair of black leather chaps, the perfect ensemble for the masochist who enjoyed a good beating.

“Thank you
, Mistress,” blubbered the leather-clad figure. His head hung down as he trembled on his hands and knees—the only acceptable position for a submissive in her presence.

But he’d spoken.
The nerve.

“Silence
, worm!” she thundered. “I did not give you leave to speak. Just for that, I will forgo the treat I had planned for you.” She actually hadn’t planned anything extra—fatigue pulled at her, making her eager to end the session. But just the thought of having displeased her made her pathetic subject squirm in contrition.

At least he showed brains enough not to reply this time, just ducking his leather
-masked head down submissively, as if the mask could conceal his identity.
Surprise, surprise
. She’d easily figured out the identity of her secret slave at their first meeting. Only Zorro and Batman had ever successfully succeeded with that lame ploy.

Pathetic
. With the session over, she coiled her whip. It would require a good cleaning and oiling later to keep the leather supple and in good condition. She stored it inside her large hockey bag, more like her portable dungeon with all the easily carried tools of her trade—whip, flog, paddle, ball gags, rope, and a myriad of other painful-looking tools.

B
lack trench coat slipped on, she buttoned from knee to neck to hide her eye-popping ensemble consisting of a black lace corset, skintight leather pants, and over-the-knee, four-inch-high stiletto boots of supple leather. When one played a part, one had to dress the part. The mask she left on. She never took it off until she hit the road and pulled her version of a Clark Kent.

“I will return next week. Same time and place, but in the meantime, you had better think about how you offended me. Do it again and maybe I’ll never return.”

A sob answered her, along with a frantic head bob. About time he started obeying the training she’d subjected him to. She always made the rules clear from the beginning and expected strict adherence and obedience. The number-one rule being, “Don’t speak unless ordered to.” She had no interest in anything her clients had to say. They were just a means to an end.

Grabbing the thick envelope
with the evening’s earnings off the motel’s scarred dresser because, after all, nothing in life was free, not even a good beating, she shoved it into the pocket of her trench coat and, with her hockey bag slung over a shoulder, went out into the night.

God, the exhaustion
threading her limbs threatened to drag her down, and to think she still had a twenty-minute drive to get home. Her dungeon gear got tossed into the back of her cherry-red Beretta—old, perhaps even considered vintage by now, but still her baby. She slid into the driver’s seat with a sigh of relief as she took the pressure off her feet—heels might look good but they were hell on her arches. She put the car into gear and swung out onto the main road. Only once she hit a red light did she peel off her mask and pull out the envelope to check the amount. Her sub knew better than to short-change her, but it always paid to check.

Five hundred and fifty bucks.
Not bad for an hour berating some stuck-up suit and beating the hell out of him. Usually she charged five notes, but it seemed her little toy had included a tip for a beating well done. And that was all he got. Punishment.

Gross
, some would say, but it sure helped out with her living expenses, and she enjoyed the position of control. After four years of pro-domming, she had almost managed to pay off her mortgage. Not a bad feat for a single woman living on the outskirts of a metropolitan city. It helped that she charged premium rates too. Five hundred dollars an hour or eight hundred for two. When she’d first started out, she’d been astonished at how much respectable men would pay for her to treat them like dirt. And she loved being the one to dish it out.

H
er reputation as a merciless bitch ensured she always had a full stable of subs begging for her services, not that she saw them all. She’d reached a point she could pick and choose who she saw. A couple of times a week, she turned into mighty bitch and let her frustration enjoy free rein. It seemed her endless supply of anger had finally become useful. The only problem was that, no matter how much she hit and hurt, her deep well of rage remained bottomless.

Started as a form of therapy,
dominating had ended up instead providing a nice cash bonus each week. She even paid taxes on it, thus enabling her to claim all her expenses because her freelancing as a Domme didn’t come cheap. Leather and PVC outfits, quality ones, cost big bucks, as did the tools of her trade. Paddles, whips, canes, clamps, good rope, ball gags... And the list went on and on, depending on a domina’s field of expertise or offered services.

Some would say she wasn’t a true lifestyle
dom. And she’d have to agree. She didn’t seek to form lasting emotional bonds with those she punished, but then again, neither were they. They were looking for a discreet, no strings way of living out their fantasies. She was willing to provide it, for a fee.

The funniest part about it all, though, was no one knew. No one suspected that prim and proper Marissa Masters—the irony of her name didn’t escape her—the efficient, no-nonsense city clerk by day, turned into a leather-clad cat woman at night. Good thing too. Most of her coworkers hated her. She strictly abided by the no-friends-in-the-workplace adage. If they even so much as guessed, they’d report her and have her fired. Unfair, but true.

Oh, they’d come up with some bullshit excuse, but she’d get fired nevertheless. Never mind her professionalism and dedication to her work. Office politics always won out.

So like the mysterious Batman, she changed persona in secret and stalked the streets at night under the cover of darkness, punishing the weak and, well, giving to herself.

Pulling into her driveway,
she stifled a yawn and decided to leave her bag in the trunk. Time enough to deal with it later, once she’d rested. Or maybe she’d just leave it there. Her next appointment three days from now would require it, and the stupid thing weighed a ton.

Jaw cracking on a large yawn, she told her mind to take a break and stumbled off to bed, alone, just the way she liked it.

A phone beeped, a glaring, ominous sound that signaled the much waited for incoming message. Right or wrong—time to find out.

Grabbing the silver iPhone from a polished wood table, quick fingers pressed and loaded the incoming e-mail with attachment.

In plain black and white, the text of the e-mail relayed nothing.

As per our arrangement, please view the attached video. Contact me if more research is required.

A simple click on the attachment icon was all that was needed to pop open a little movie window. A foot impatiently tapped away the seemingly interminable wait as the clip buffered into memory.

Time for the moment of truth.

The clip started to play, and with each stroke of the whip, a cracking sound that echoed loudly in the quiet of the room, the hand clenched tighter and tighter. At the end of it, silence reigned as the person absorbed the ramifications of what they’d seen. Anger bubbled below the surface, the situation even worse than expected. This perversity would not do at all. So many hopes, dreams, ambitions—all of it ruined if the knowledge held in the damning video became public.

The phone went flying and hit the wall hard before falling to the floor—another victim of this folly.

T
his perversion could not continue. It needed to stop. Now. But how?

Perhaps one of the parties could be made to
see reason. Intimidation first, then on to stronger tactics. In this case, hesitation was the enemy. Action had to be taken before all they’d worked for turned to dust and graced the front page of a newspaper tattle rag.

Retaliation and cleansing of the impure one would taste so sweet.

Trouble in Texas by Katie Lane
War Games (Alien Instincts) by Lore, Cynthia
Linda Ford by The Cowboy's Convenient Proposal
Trinity - Defying Destiny by Kylie Price
Benjamin Franklin's Bastard by Sally Cabot
Kill Me Twice (A Zeke Edison Novel Book 1) by Joseph Flynn
A Part of Us by Eviant
Once Upon A Time (Historical Romance) by Constance O'Banyon
The Chosen Prince by Diane Stanley
El Dragón Azul by Jean Rabe
Our partner