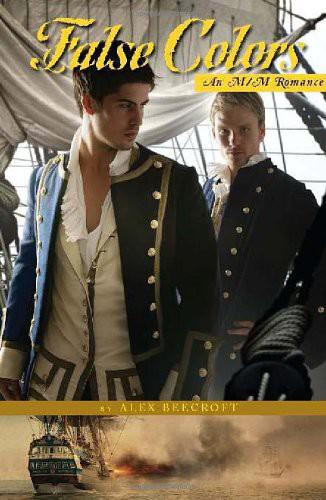 Alfie’s pulse rocked against John’s encircling fingers, the only thing about him to give evidence of life....

A droplet, like an errant diamond, slid across the bunched muscles of his jaw and pooled in the hollow of his throat, making John want to lean in and lick the little ‘v’ clean of its salty taste. His mouth watered at the thought, and that discovery alarmed him. Perhaps this was not the time to attempt an explanation of his self-questioning after all. Something more basic was required.

Pulling his hands away, Alfie turned them over, examining his palms as if for incriminating stains. “I don’t know,” he said at last, his voice muffled and thick. “I don’t know if I can.”

He raised his head, his tawny golden eyes cold and grim as a hunting lion’s. “I have no idea what to make of you any more, Cavendish. And until I’ve decided, I’d be obliged if you didn’t assume I’m yours for the asking.”

A surge of water clear as air rushed in as Alfie wrenched himself aside. Beneath the waves the bay’s little coral fish whisked away, startled, into cover. Alfie covered his eyes with one hand, thumb and fingers digging into his temples.

“Maybe I’ve learned the lesson you chose to teach me, Mr. Cavendish,
sir
,” Alfie went on quietly. “Maybe I’m going to ‘amend my life’, so that I can look down on you. Now if you don’t mind, I want to be alone.”

This book may not be reproduced in whole or in part, in any form or by any means, electronic or mechanical, including photocopying, recording, or by any information storage and retrieval system now known or hereafter invented, without written permission from the publisher.

Digit on the right indicates the number of this printing

Visit us on the web! www.runningpress.com
HAPTER 1
HMS
Termagant,
standing out from France—1762

Beneath the
Termagant’s
imposing side, the newly captured
Météore
wallowed like a discarded boot. John Cavendish, however, standing by Admiral Saunders’ shoulder, gazed on it with as much satisfaction as a returning husband might gaze on his young wife. Around him, the fume of smoke blew away in dirty yellow tendrils across the Bay of Biscay, revealing the squadron; a thicket of masts, a white foliage of sail as the ships filled and backed, holding station around the flagship.

After Admiral Hawke had so gloriously trounced the last invasion fleet at the battle of Quiberon Bay, Saunders’ squadron had been sent to cruise the French coast and discourage the formation of another. The little French convoy of merchant ships with their escort of two-decker and gun-boat which they intercepted this morning had put up a brave, despairing fight, but it had been all over by lunchtime. Various lieutenants, more senior than John, had been dispatched already to take the more valuable prizes back to England. But the
Météore…
the
Météore
was to be his.

“Your temporary papers.” Admiral Saunders took the hastily written page from his flag captain and handed it to John. “Well done, Mr. Cavendish.”

“Thank you, sir.” John’s breast filled with happiness. It was all he could do to keep a reasonably straight face—the smile would keep trying to escape. As he folded the paper and tucked it into his waistcoat, his joy got the better of him and he could not help repeating, “Oh, thank you.”

Saunders, a florid man with piercing blue eyes, paled and gave John an uncomfortable look. He pushed back his wig and rubbed at the line indented across his forehead. “Walk with me a moment.”

At this hint, the captain and the midshipman of the watch strolled away, leaving John and Saunders in virtual privacy on the windward side of the quarterdeck. Silence fell, as Saunders looked out on the fleet, watching replacement yards being rigged on the
Juno
.

Snatches of fife music skirled shrill across the water as the distant
Hebe
’s men stamped and turned the capstan to raise a new foremast. On the flagship itself the carpenters were hard at work plugging shot holes. But down on the
Météore
the sparse crew stood about, idle, waiting for someone to tell them to bend on a new suit of sails; to get the gore and body parts of the previous occupants off the deck, and clean her up. John itched to be there, getting on with it, as soon as was decently possible.

Eighty pairs of eyes watched John as he came up the side and strode stiffly to the
Météore
’s small quarterdeck. Taking off his hat, he turned to face his crew, noting the slack, bruised faces of men with scurvy, the nose-less, crusted features of those whom pox was slowly consuming from within. The Master was barely being held up by his mate, his linen drabbed with wine stains. The single midshipman picked his nose as he slouched by his division, then spat over the side. Only the new lieutenant stood straight and alert, in newly laundered dress uniform, his wig powdered, his buttons gleaming and his pale brows arched a little in amusement as he watched John struggle with hat and paper in the increasing wind.

Rules of Lying (Jane Dough Series) by Smith, Stephie
Life of the Party by Christine Anderson
Far-Seer by Robert J Sawyer
The Book of the Beast by Lee, Tanith
Yours Until Dawn by Teresa Medeiros
Holding Hannah by Maren Smith
Born to Be Wild by Catherine Coulter
In the Walled Gardens by Anahita Firouz
People of the Wolf by Gear, Kathleen O'Neal, Gear, W. Michael
204 Rosewood Lane by Debbie Macomber
Our partner