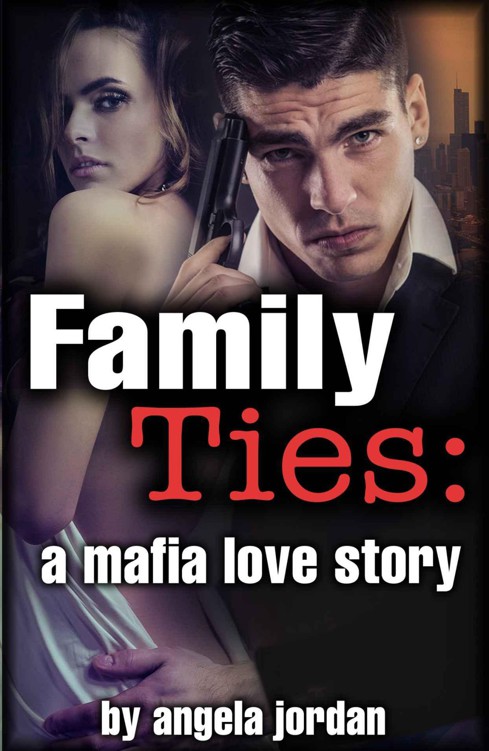 Visit
mafiaromance.com
to get the latest news about all of Angela’s books!

I woke up in a strange place, in a strange bed, next to an extremely hot – and gloriously naked – strange man.

…
What happened last night?
My mouth tasted like cotton and I had an icky sweet taste in my mouth that literally made me want to vomit. My stomach felt bloated, my head was pounding and I couldn’t hold my trembling hands still if I tried. There was light streaming in from the giant windows that surrounded the bed and it was doing nothing but making my head pound worse and darkening my already foul mood.

I sat up slowly, not wanting to wake the strange bedfellow next to me. I tried to shake out my hair, but it was a tangled mess. The motion of sitting up had made me nauseated and once again I had the feeling that I was going to throw up. I looked around me, wondering where the bathroom was. I was humiliated enough just waking up here, the last thing I wanted to do was hurl all over hot guy. I needed to get the hell out of here.

I slipped out of the bed and started to quietly tiptoe around the room, looking for my clothes. I felt panic rise in my chest and even a taste of bile at the back of my throat when I didn’t see them at first. I finally spotted them, tossed in a pile on the far side of the room. I was relieved to see that the new Coach purse and Manolo Blahnik heels that I’d spent my last bonus on were still there, sitting atop the skirt and blouse I had worn the night before. I deftly picked up the pile and continued on tip toe out the door that was set open a crack.

Once out of the bedroom, I felt like I could finally breathe. My head still hurt too badly to think, so trying to figure out who I’d spent the night with naked, what I’d done and why wasn’t an option at this point.
Alana, Alana,
I said to myself…
what did you get up to last night?
I was not normally the type to be hooking up with a random stranger, so there had to be more to this scene than met the eye. I’d have to think about that later, though. Right now, I looked around the room I was in and my feeble brain was able to at least discern that I was in a hotel. It was a nice hotel and this was a luxury suite, the nicest one I’d ever been in. The furniture was black leather and looked like it would be as soft as down to the touch. There was a glass coffee table and end tables that held expensive looking-vases with fresh flowers inside of them.

The walls of this room were glass, like the bedroom, and after slipping on my clothes I walked over and looked out one of them onto the sprawling city at least thirty stories below me. I was still in Manhattan, thank God. If I had my bearings right from the buildings that surrounded us, I’d have to guess I was in the Glass Towers. It was a new, posh and extravagantly expensive hotel that had only opened a few weeks before. I know this, not because I could ever afford to stay in a place like this, but because I had done a story on it for the paper I worked for.

Oh shit!
I suddenly realized a story was what I’d been working on last night….one that had to do with this very hotel. Not long after the hotel opened, I had started getting emails from a guy whose handle was [email protected]  He told me that he’d gotten my email from my byline, which was totally believable. What he told me next was the part I wasn’t so sure of. He claimed to be a Capo for the Cosa Nostra. He said that he had information for me that if reported right, could blow the organization wide open. He indicated it had something to do with this hotel and the well-respected owners, Carla and Marco Ricci.

I didn’t know if this guy was legit or full of shit, but it would be a huge story if it was true – and I could be the one to break it. It was worth a meeting, at the very least. I’d been working for the New York Star for just over a year now, and I was tired of doing the community interest kinds of stories. I was ready for something big.

After a week of this guy “romancing” me over the internet however, he hadn’t given me anything that I could use even for a community interest story. I bluntly told him that I wouldn’t be answering his emails any longer…I didn’t have time for his games. He had written back:

I had done a little internet dating in college and that’s what this felt like to me, but like I said before, it was worth a meet anyways. 230 Fifth was an upscale club on a rooftop in Manhattan. It would be crowded and not conducive to this guy raping or killing me, so I’d agreed to meet him.

Now, as I stood looking out on the early morning Manhattan skyline, I wondered how I’d gotten from there to here. The harder I tried to think about it, the more my head throbbed. I picked up my purse and fished out my phone and quietly called a cab.

I picked up my shoes once again enduring the pain that ripped through my alcohol-pickled brain and I tiptoed towards the door. I caught sight of my source’s brown linen jacket hanging over a chair next to the door and I had another flash of what had happened the night before.

I’d walked into that club on the roof, and God help me if I wasn’t met by the hottest Italian Stallion that I’d ever personally seen, onscreen or off. He had jet-black hair that stylishly hung to his shoulders, with huge, dark, almost obsidian eyes, perfectly clear olive colored skin, and a body that Adonis would have been jealous of. I’m not usually one to swoon over a pretty face. I pick my dates and my bed partners carefully, and usually more for their brains than their brawn. But this man….I had no words for the flood of hormones the sight of him sent raging through my body.

He had introduced himself to me as Sammy Romaletti and he said that he was “Sicilian Son” and he had been the one sending me the emails. He led me back to a private table in the corner, a prime spot in the club that was marked with a “reserved” placard. I’d sat down with him and he’d ordered us a drink. He called me “Bella” and told me how beautiful I was. I kept trying to direct him back around to why we were there….to the information he had for me, but he kept ordering more drinks and for some reason…I kept drinking them. From what I can remember now, that went on for hours. I don’t think I ever got any real information. If I did, I was drunk enough to have forgotten it.

I’ve never slept with a guy for a story….ever….and I had never planned on it. But something about this guy had silenced every warning signal and swept away every moral that I thought I ever had. I didn’t do one night stands, I didn’t sleep with strangers….but I did and I had….
Damn!

I took hold of the gold door knob and as I began to twist it open I heard, “Good morning, Bella,” behind me. Hands and knees shaking, I turned around slowly and what I saw could have been sculpted in stone. It was the most perfect specimen of a male that I had ever laid eyes on and quite possibly that had ever lived standing nude in the doorway. I forgot that I was Alana Blankenship, respected journalist all over again. Now I was just Alana Blankenship, girl with raging hormones and wet panties. The sight of him made my body quiver, and the night we’d spent together suddenly came rushing back.