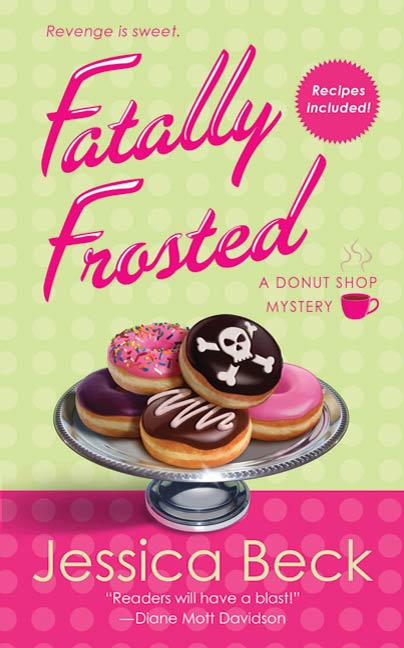 The premier website
for the best in crime fiction.

The Labyrinth:
Sign up for this monthly newsletter and get your crime fiction fix. Commentary, author Q&A, hot new titles, and giveaways.

MomentsInCrime:
It’s no mystery what our authors are thinking. Each week, a new author blogs about their upcoming projects, special events, and more. Log on today to talk to your favorite authors.

“Jessica Beck’s
Glazed Murder
is a delight. Suzanne Hart is a lovable amateur sleuth who has a hilariously protective mother
and
great donut recipes! Readers will have a blast with this book.”

“A tribute to comfort food and to the comfort of small town life. With great donut recipes!”

“If you like donuts—and who doesn’t?—you’ll love this mystery. It’s like a trip to your favorite coffee shop, but without the calories!”

“Jessica Beck’s debut mystery,
Glazed Murder
, is a yummy new treat in the culinary mystery genre. Skillfully weaving donut recipes throughout a well-plotted story, the author proves that life after divorce can be sweet; all you need are good friends, your own business, and comfort food. Delicious!”

—Tamar Myers, author of
Death of a Rug Lord
and
The Cane Mutiny

For E & P,
And all the donuts we’ve shared together
through the years!

“Keep your eyes upon the donut, and not upon the hole!”

I thought getting away from my business—Donut Hearts—for a few days might be fun. But when I agreed to make gourmet donuts for one of my friends, I had no idea it would put me right in the middle of yet another homicide investigation.

Just about everyone I knew in April Springs, North Carolina—population 5,001—was looking forward to the September Kitchens Extraordinaire home tour ever since it had first been announced in
The April Springs Sentinel
, including me. When my friend Marge Rankin suggested I demonstrate how to make something special in her newly remodeled kitchen for the tour, I’d jumped at the chance to show off just what I could do with some dough and a portable fryer. There wouldn’t be a yeast donut or an apple fritter on the menu; I was going to pull out all of the stops and make something unforgettable.

“Jake, do you really want to learn how to make beignets?”

My boyfriend—a state police inspector named Jake Bishop I’d been seeing since March—smiled at
me as we stood in the kitchen of Donut Hearts. He looked cute wearing one of our aprons, but I knew better than to tell him that. Jake was tall and thin, with a healthy head of sandy blond hair, and there was something about the man’s presence that made me smile.

“Not as much as I want your company,” he admitted. I didn’t get to see him nearly enough, since his casework took him all over the state of North Carolina. I had to give him points for honesty, but I still had a job to do.

“I’ve got an idea,” I said. “Why don’t you sit over there and keep me company, and I’ll let you sample the beignets I make? You can be my official taster.”

He took off the apron as though he’d been pardoned for a crime he’d never committed. “That’s the best deal I’ve had weeks.”

“You don’t have to look so relieved when you say it,” I said with a grin.

“What can I tell you? I’m all about leaving tough stuff to the experts.”

I frowned at the finished dough. It was close to the consistency I’d been hoping for, but the true test would be in the taste. “I’m not sure I qualify.”

“Come on, you’re the best donut maker in the world. You told me yourself beignets are just fancy donuts, and no one’s better at making those than you. I’m a cop; trust me, I know donuts.”

“I appreciate the sentiment, but I don’t have time on the tour to make these with yeast, so I’m going to have to substitute baking powder instead. It’s more chemistry than you’d imagine.” It was true. While cooking recipes could usually be slightly modified
with impunity, baking was another matter altogether. I needed enough baking powder to make the dough rise when it hit the hot oil, but not too much, or it would be a disaster, and if there was one thing I couldn’t afford, it was to wreck my demonstration.

He laughed. “Don’t sell yourself short. I know I couldn’t do it.”

I lightly floured the counter and rolled out the dough until it was somewhere between a quarter- and an eighth-inch thick, and then cut it into squares. For the demonstration, I’d be using my ravioli cutter, a scallop-edged tool that left perfectly shaped circles, but this test run was more about taste than appearance.

I dropped the first rounds into the oil and held my breath. After cooking two minutes on one side, I flipped them, and then pulled them out after another two. I had a plate ready, and dusted them with confectioner’s sugar while they were still hot.

“Man, those smell fantastic,” Jake said as I slid the plate in front of him.

We both reached for the same one, and I laughed. “There’s plenty for both of us.”

“That’s what you think.” He took a bite, and I watched his expression. If his look of joy meant anything, I might have a winning recipe after all.

“Outstanding,” he said as he reached for another one.

I was happy with his reaction, but I was a harsher judge myself. I bit into the treat, and felt the texture of the beignet in my mouth. The flavor was spot on, a hint of airy lightness that tasted something like a
sophisticated funnel cake from a fair. I had to agree that it was good—there was no doubt about that—but was it as good as my yeast beignets?

“Well, maybe I’d better eat the rest of these so I can be sure.” He had a hint of powdered sugar on his nose, and I reached over and wiped it off just as his cell phone rang.

“Bishop here,” he said as he answered, his voice becoming instantly serious. I had no idea how he turned it off and on like he did.

“I’ve got a case. It’s on the Outer Banks, Suzanne. Looks like I’m going to have to miss the tour. Sorry.”

“You’ve got a job to do,” I said, a little sad that he wouldn’t be there for my demonstration.

He shrugged, and then wrapped me in his arms. “I’ll call you later.”

“Liar,” I said with a grin. When he was on a case, I knew how focused he could get, so I didn’t expect daily, or even weekly telephone calls.

“You caught me,” he said, and then to make up for it, he kissed me.

After he was gone, I could swear I could still taste the beignets on his breath.

The day before the tour, Marge stopped by Donut Hearts half an hour before we were set to close to go over my menu one more time. She was a petite woman in her early sixties, and her smile was always a little crooked, shifting slightly to the left whenever she
grinned. You couldn’t see it at the moment, though, since Marge wasn’t anywhere close to smiling.

“Suzanne, are you certain you’re ready for the big day? I don’t mean to put any extra pressure on you, but this is important.”

I nodded and did my best to reassure her. “Marge, I’ve got everything under control. I’ve been staying late an hour every day for a week to test my recipes and polish my cooking techniques with the portable fryer, and I’ve got it all down cold. Don’t worry. It’s going to be fabulous.”

Papelucho Detective by Marcela Paz
The Last Revolution by Carpenter, R.T.
The Good Spy: The Life and Death of Robert Ames by Kai Bird
War Babies by Annie Murray
How The Warrior Fell (Falling Warriors series Book 1) by Nicole René
Sweet Surrender by Maddie Taylor
Green Darkness by Anya Seton
Corkscrew and Other Stories by Dashiell Hammett
One Night with the Demon Prince: Paranormal Fantasy Demon/Dragon Shifter Romance (Paranormal Protection Agency Book 9) by Mina Carter
Call Me by My Name by John Ed Bradley
Our partner