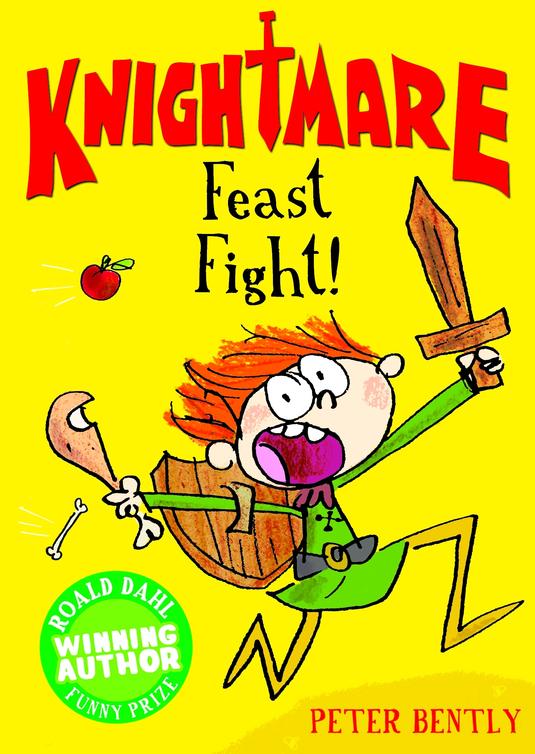 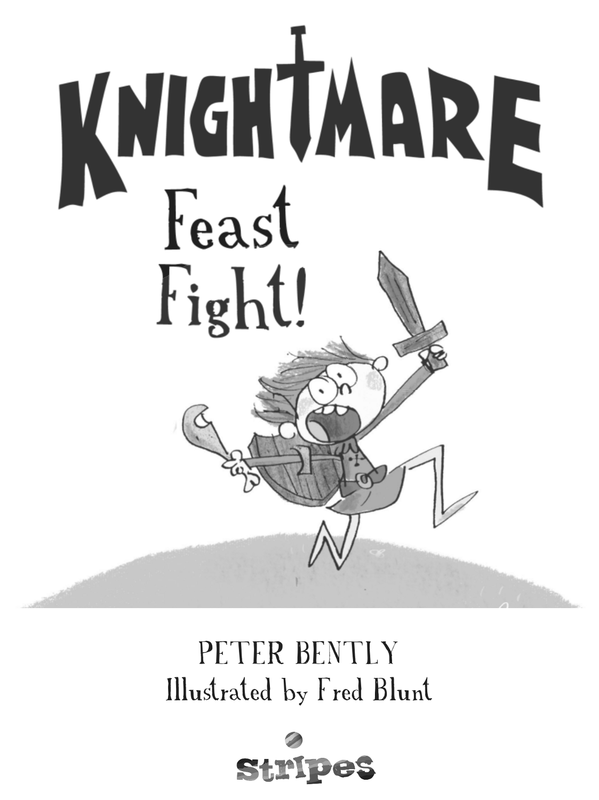 For Lucy, Theo and Tara – PB

For Mum and Dad, who encouraged my scribbling from the beginning – FB 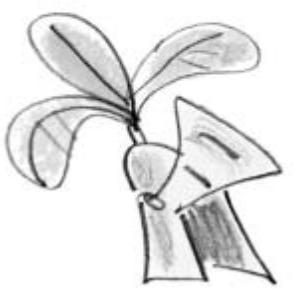 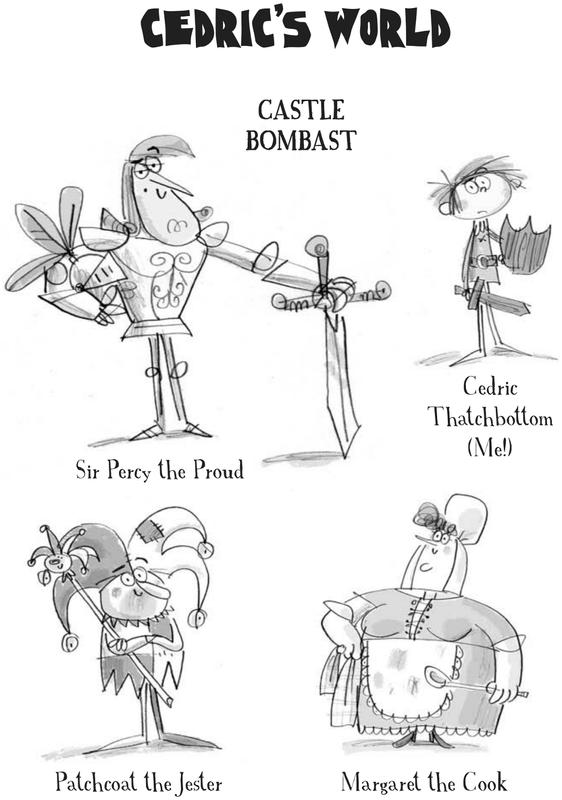 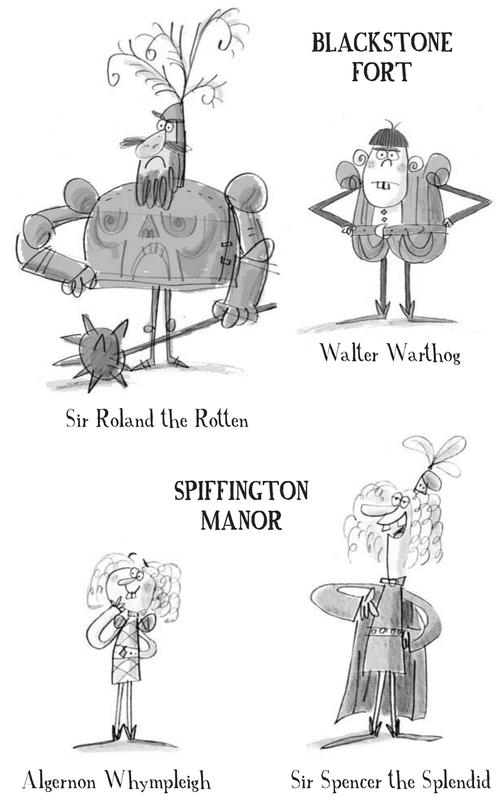 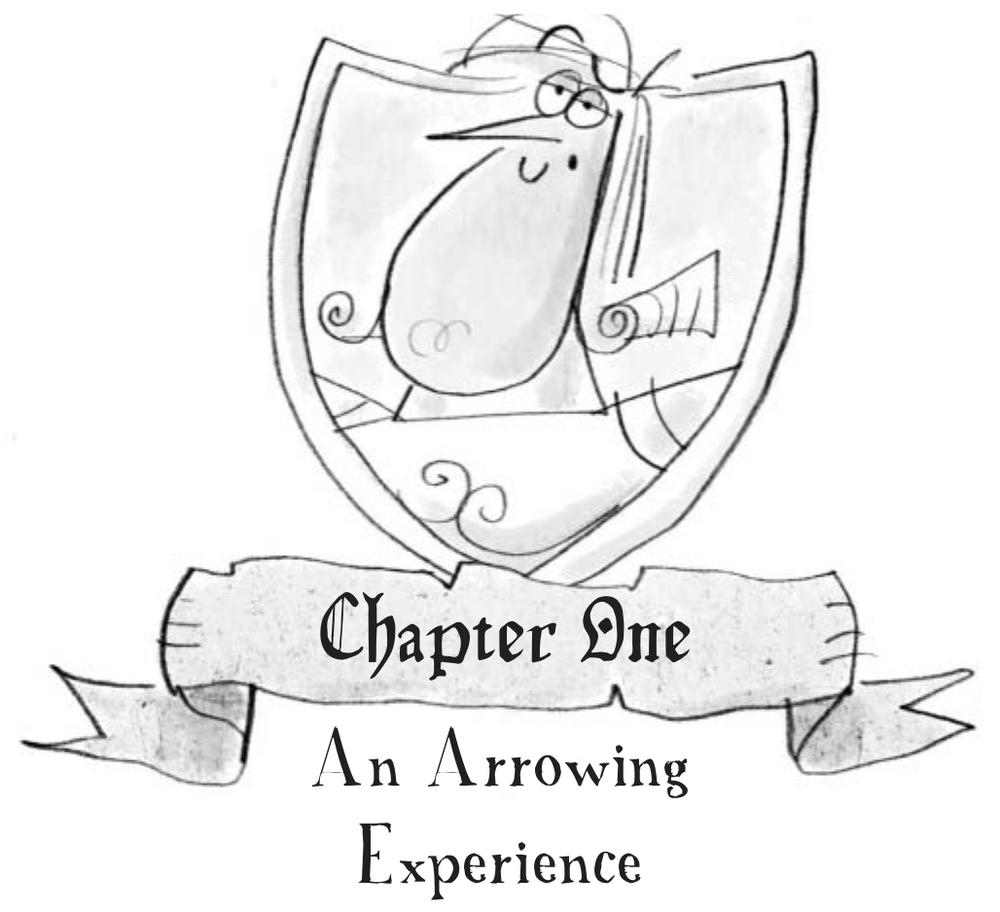 “Ah, I think we’ll call that a warm-up shot, Cedric,” said Sir Percy, lowering his bow. “Now be a good fellow and fetch the arrow.”

I walked shakily to the large oak tree
and pulled out Sir Percy’s arrow. It was
exactly
where I’d been standing just a few seconds earlier.

“Shift the target a bit to the left,” he said. “Those trees are spoiling my line of sight.”

“Yes, Sir Percy,” I sighed. For the zillionth time that morning I lugged the target to a new spot. Sooner or later he might actually hit it. Just as long as he didn’t hit me first.

I
hadn’t
been standing close the last time. I’d been sheltering somewhere nice and safe – or so I’d thought. If I hadn’t dived out of the way, Sir Percy would have needed a new squire for the second time in three months.

A knight is supposed to teach his squire proper knighting skills. But somehow my master – known to his many fans as Sir Percy the Proud – never quite gets round to it. Just like that morning, when he’d said he
might
let me have a go with the bow once he’d “warmed up”. Two hours of “warm-up shots” later I obviously wasn’t going to be firing my first arrow any time soon. I can safely say that Sir Percy couldn’t hit a castle gate if it was right in front of his nose.

Actually, make that a
castle
.

Could this really be the same famous knight who once shot a secret message tied to an arrow through the arrow-slit of a besieged castle? From half a mile away?
At night? Blindfolded? It’s one of the best bits of
The Song of Percy
, Sir Percy’s wildly popular account of his knightly deeds. Hmmm. It wasn’t the first time I’d wondered whether
The Song of Percy
might be a bit … exaggerated.

He notched another arrow to his bow and I quickly checked for a safe place to fling myself the moment he fired.

All of a sudden I heard the sound of hooves among the trees. But before I could say anything, a gust of wind blew Sir Percy’s dashing new green and orange velvet hunting cap over his eyes.

I leaped for cover, but luckily his arrow flew high over the trees.

There was a startled yell and a whinny. Then a grandly dressed man rode out of the trees looking alarmed – and very cross. Sir Percy’s arrow was sticking out of his saddle, right between his legs. A couple of inches the wrong way and … ouch!

“This is an outrage!” roared the rider, who looked vaguely familiar. “Raining
arrows on me. I could have been cut off in my prime!”

“My sincerest apologies,” said Sir Percy. “It was the wind.”

“I don’t care about your personal problems,” said the man. He yanked the arrow out of his saddle and flung it at Sir Percy’s feet. “Next time, mind where you’re shooting, you careless twerp!”

“Now look here,” scowled Sir Percy, puffing out his chest. “I will have you know that I, Sir Percy Piers Peregrine de Bluster de Bombast, will not be spoken to in that tone by the likes of-of—”

“Fitztightly,” fumed the man. “Baron Buskin Fitztightly. Chief Herald of
His Majesty the King. And good morning to you, Sir Percy.”

Sir Percy’s face quickly switched to his cheesiest grin. It was better than one of Patchcoat the jester’s conjuring tricks. 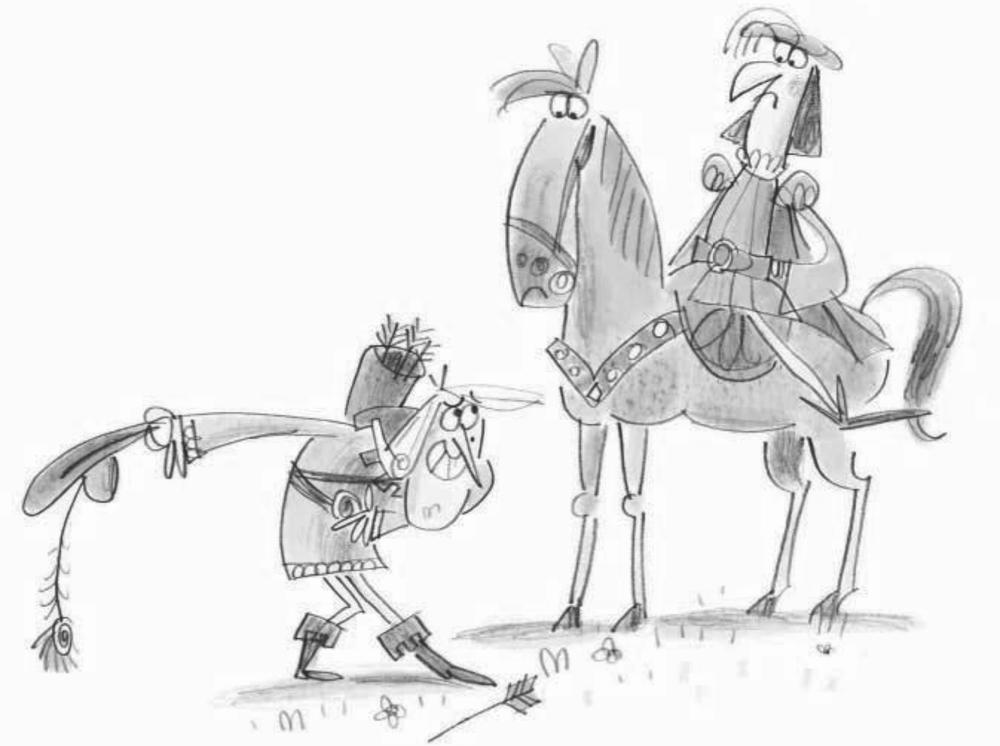 “Just my little joke! Of course I recognized you at once,” he fibbed. “
Delighted
to see your lordship. You are most welcome to Castle Bombast. And how
is
His Majesty? In fine health, I trust?”

“You can ask him yourself,” said Baron Fitztightly. “At the banquet tomorrow night.”

“A royal banquet?” said Sir Percy. “How simply marvellous! Cedric, we must prepare to travel to the palace at once. I shall need new evening robes, my best armour, a new set of plumes for my helmet, and—”

“This
isn’t
an invitation to the palace,” interrupted the baron.

“Indeed,” said the baron. “The king and queen are visiting every knight who did well in the tournament. Including
you
, Sir Percy. Or perhaps you’d forgotten?”

So
that’s
where I’d seen Baron Fitztightly before! A few weeks earlier, the fearsome Sir Roland the Rotten had challenged Sir Percy to a joust at the king’s tournament. Sir Percy wriggled out of it by making me wear his armour and pretend to be him.

Amazingly, I actually won the joust – by a sheer fluke. But of course everyone thought I was Sir Percy so he took all the credit.
He’d even had a huge, expensive tapestry made called
The Triumph of Sir Percy
. It shows Sir Percy knocking Sir Roland off his horse into a large pile of poop. And very splendid it looks, too – apart from the tiny detail that it never actually happened. 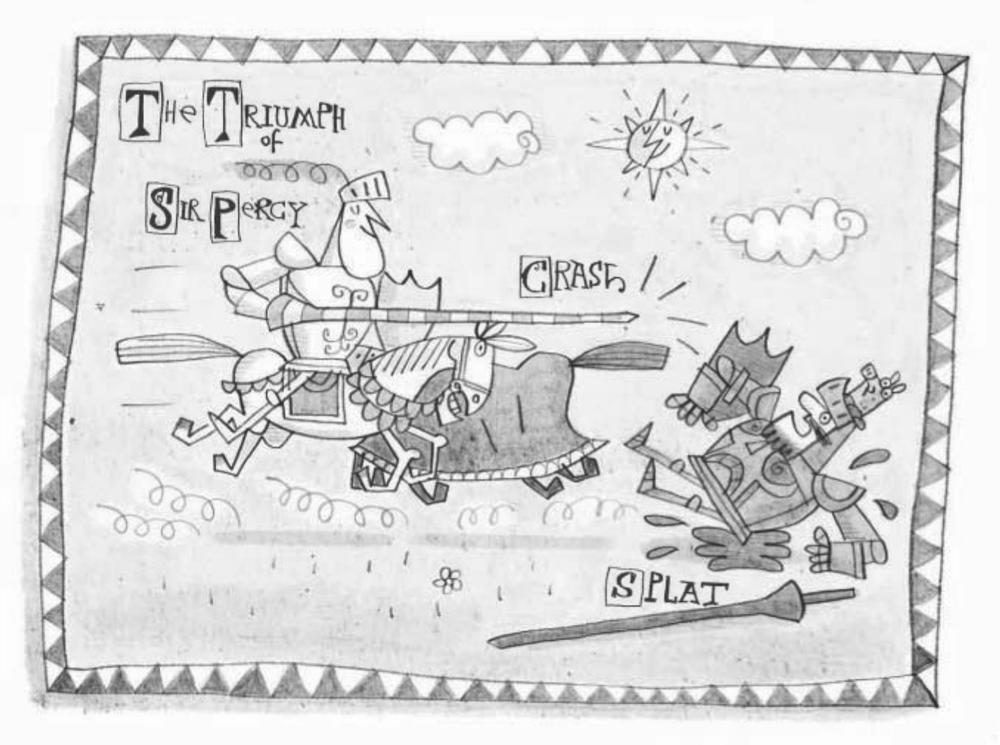 “Their Majesties expect your best bedchambers, an excellent banquet and top-notch entertainment,” the baron went on. “They will arrive just in time to dine at seven o’clock. Talking of which, I’d better get on and deliver these invitations.” He patted a leather bag with two parchment scrolls sticking out of it.

“Invitations?” said Sir Percy. “Who else is coming?”

“Whenever the king stays with one of his knights, he always invites all the other local knights to the banquet,” said the baron.

“Oh, goody!” said Sir Percy. “That means he’ll be inviting my old pal Sir Spencer the Splendid. He only lives an hour’s ride away.
What fun!”

“Correct,” said the baron. “I’m going there next.”

“So who’s that other invite for?” said Sir Percy. “Ah, I know!” He gave the baron a sly nod and a wink. “Is it perhaps for some noble young … lady? After all, there are no other knights around here.”

“Depends what you mean by ‘around here’,” said the baron. “This district stretches as far as the Forest of Grimwood.”

Sir Percy’s face fell. “
Grimwood
?” he said. “But only one other knight lives between here and Grimwood, and that’s … that’s—”

“Sir Roland the Rotten,” said the baron with a wry smile. “Precisely. I’m sure he’ll
be
delighted
to come to the banquet. Good day, Sir Percy!”

But the baron had already ridden off at a brisk trot.

We set off back to the castle. Sir Percy hurried ahead while I staggered behind him carrying all his archery equipment.

“We must start preparing at once for the royal visit,” said Sir Percy. “There’s a lot to arrange. However, it would be
most
unknightly to overburden one’s squire, and therefore I’m only giving you
three things to do.”

“Don’t mention it, dear boy,” said Sir Percy. “So you’re in charge of the bedchambers, the banquet and the entertainment. I shall take care of – um – everything else.”

“Er –
is
there anything else, Sir Percy?” I said before I could stop myself. 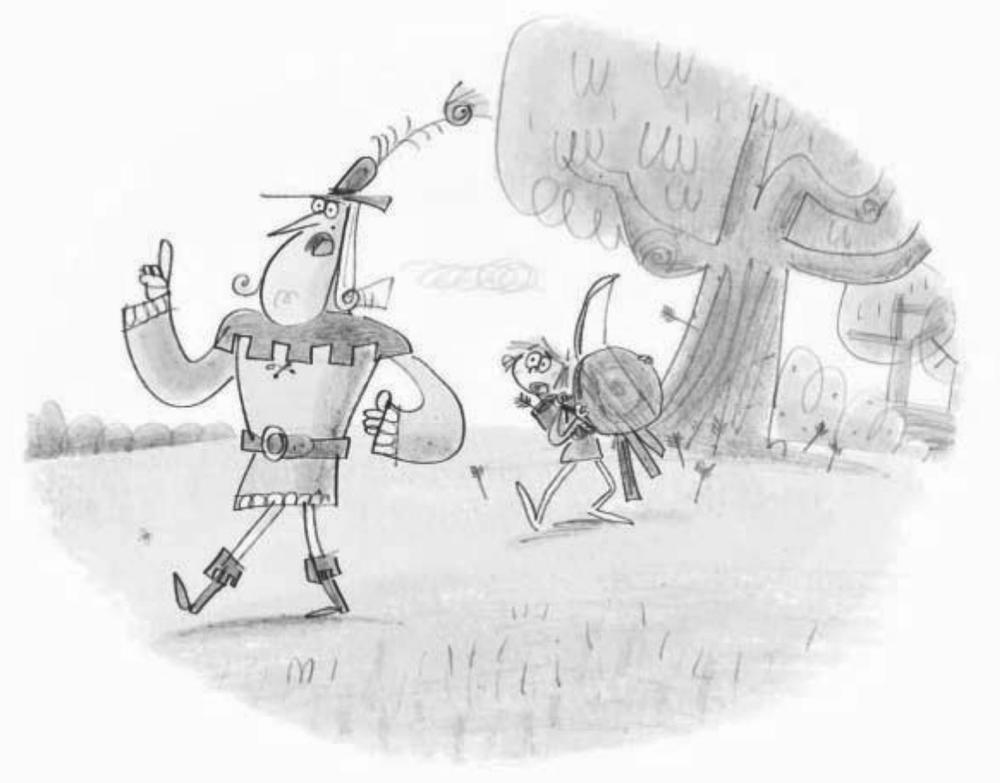 “
Most
amusing, Cedric,” he frowned. “Kindly remember your Squire’s Code and refrain from being cheeky to your master.”

“As a matter of fact I shall be
extremely
busy,” Sir Percy said huffily. “But first we have to deal with Sir Roland. There’s no way he’s coming here to spoil
my
banquet. Besides, it’ll be cheaper with one less guest to feed.”

“How can you stop him?” I asked. “He’s been invited by the king himself.”

I hated the idea of Sir Roland coming as much as Sir Percy did – especially as he’d bring his sneaky squire, Walter Warthog. But I didn’t see what Sir Percy could do about it.

Uh-oh. I was starting to learn that when Sir Percy said something was “simple” it usually ended up being difficult and dangerous.

“But the baron’s already on his way to Blackstone Fort,” I said. Blackstone Fort is Sir Roland’s huge scary castle and I still shiver to think about the time Sir Percy got me to sneak into it at night.

“Indeed, Cedric,” said Sir Percy. “But he’s heading to
Sir Spencer’s
castle first. It’s an hour away by the main road. If you cut through the wood on Gristle the mule you’ll easily catch him up.”