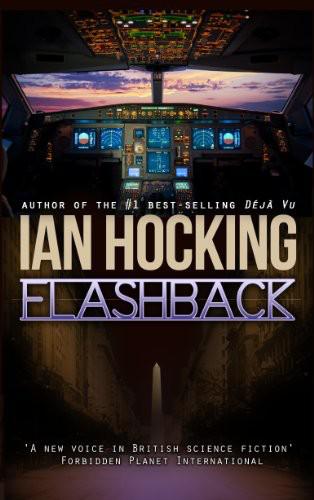 Unless otherwise stated, this story is a work of fiction. Names, characters, places, and incidents are either products of the author’s imagination or used fictitiously. Any resemblance to actual events, locales, or persons, living or dead, is entirely coincidental.

No part of this publication may be reproduced or transmitted in any form or by any means, electronic or mechanical, without permission in writing from the author.

Ian Hocking has asserted his right under the Copyright, Designs and Patents Act 1988 to be identified as the author of this work.

Published by Writer as a Stranger

The Story of Flashback

During his fifteen-year writing career, Ian Hocking’s fiction has been published extensively, both online and in print. He graduated with a degree in experimental psychology from the University of Exeter and now lectures in psycholinguistics, philosophy and research methods at Canterbury Christ Church University and the Open University.

‘A new voice in Brit SF that we should all be taking an interest in.’

To those who kept the faith.

You are reading the second book of the Saskia Brandt series. It may be read as a standalone novel, but it will spoil aspects of the first book, Déjà Vu. If you intend to read Déjà Vu at all, I recommend reading it first.

The second of the two aeroplanes described in this book - British South American Airways’
Star Dust
- was real. It did indeed disappear in August, 1947, on a daytime trans-Andean flight between Buenos Aires and Santiago. The aircraft was well maintained; the crew was experienced and capable; weather conditions were good. Its last transmission was a single word that the radio operator keyed fast and clear, twice: ‘STENDEC’. I have cast my story with the actual people involved in that flight: BSAA staff, the crew of the
Star Dust
, and her passengers.

‘When, in 2023, I created the first machine that successfully sent matter through time, I was prepared for most of the things that happened to me and my colleagues. I was not prepared for the jealousy and the murder. Those things were not, as I had thought, things of the past. They were real – here and now.’

Jennifer Proctor, interviewed for
Newton, Einstein, Proctor: On The Shoulders of Giants (2092)

‘The greatest tragedy of time travel? Nothing can be changed, whatever you do. Trust me on this. What’s done is done.’

This was the place where Tolsdorf had come to die. North was the Bavarian Forest, a dark froth always visible, even on gloomy days. East: the rich plain of the Danube. To the south were the great stone feet of the Alps, and to the west the uplands of Franconia. He had grown to love this area during his work as a ranger for the forest authorities, and when government cuts made the position redundant, he had chosen to stay forever. The idea that he would die here, alone, no longer scared him, because as the twentieth century ended with the loss of his job, something had changed within Tolsdorf. He had reached an amicable divorce with himself. His eyes were steel grey now, not blue, and his hair was white, not blond. When he spat, perched on his rock overlooking the Danube, he looked down at the phlegm and noted the black flecks with indifference. Something was coming for him, alright, and it would find him here.

Tolsdorf kept a hut about half a kilometre away, down the eastern slope of a valley he called ‘the notch’. The roof and walls of the hut were prefabricated blocks camouflaged with wood drawn, as one might draw teeth, from the mouth of the forest. If a busybody came looking for the old ranger station, they would probably walk right past it. Nobody did come, though, apart from a charity volunteer from Regensburg called Frau Waellnitz who had heard the rumour of an old man in the woods. Tolsdorf tolerated her. He had even told her about the submerged concrete blocks that allowed a person to cross the river to the hut’s dooryard.

Frau Waellnitz was his last connection to society and Tolsdorf knew it. His habits had drifted towards the eccentric. For instance, he slept fully clothed, and liked to take that sleep – when it came – within a secret compartment behind the mirror in the main room of the hut. This compartment was lined with wire mesh because he had come to know these last three winters that people were manipulating his thoughts through focused radio waves. It was for this reason that Tolsdorf kept a loaded, well-maintained pistol on the stand next to his bed. Sometimes, when he could not sleep, and the river hissed louder and louder, he would swing his legs over the edge of the bed and put the pistol to his temple.

If Tolsdorf needed to keep something chilled, he put it in the river. Old batteries beneath the hut powered his lamps and his short-wave radio. To heat food, he had a blackened stove whose chimney continued some twenty metres into the dark colonnades behind the hut. As a boy, in the army, he had been shouted at by hard men. Told which berries to eat, and when. How to start a fire with a bow-drill. How to butcher out the edible parts of an animal. How to take his body to its extremes.

This he had now done. Tolsdorf had reached his last extreme. He did not expect to live through another winter. He would not let Frau Waellnitz take him from his hut. The skin of his heart was tight. It still vibrated to his sprint between the police and the fireman as those well-remembered flames rose through his former home in Regensburg.

He awoke in his cot, immediately sensing that something was wrong. Quite automatically, he scooped the pistol and trained it on the plywood reverse of the mirror door. He had a sense that something important was waiting at the extreme of his awareness. He sat quite still for ten seconds, counting them off. His forehead was sweaty. He saw sunlight in the air holes near the ceiling. Was it morning? No, he decided, patting his full stomach. It was afternoon. He had come into his compartment to nap.

He paused again as he heard a voice.

It came from the door. Tolsdorf was so certain that a boy stood beyond his secret portal, betraying his sovereignty, that he almost pulled the trigger. He tried to get up. He grunted and swore. He pushed the nose of the pistol into his nightstand and, with the little table wobbling, achieved the last of his height. His knees squeaked.

The impertinence of this repetition angered Tolsdorf. Surely, the voice belonged to a child on a dare. No doubt his friends had urged him on through the forest and pushed him across the threshold of the hut. Though could it be a woman’s voice? If so, was it a charity do-gooder? He nettled himself with thoughts of a stranger moving through the clutter around his stove, touching the remains of his lunch, pushing the hanging meats aside to find the secret compartment.

Tolsdorf would show them. He looked at the pistol. Though it was not his preferred weapon – that accolade fell to his rifle, which lay across the door lintel in the main chamber of the hut – the pistol would have to do. Tolsdorf could shoot the stranger, parcel the body in newspaper, and send it down the river to the town. But this future was ghostly. Absurd. Tolsdorf didn’t think he had the balls to shoot anyone.

Splintered Memory by Holloway, Natascha
Bet Me (Finding My Way) by Burnett, R.S
The Hunt by Ellisson, C.J.
Soul Sweet by Nichelle Gregory
Doorways to Infinity by Geof Johnson
The Marble Kite by David Daniel
One Blood by Graeme Kent
She Had No Choice by Debra Burroughs
Scorch by Kait Gamble
Kissing Comfort by Jo Goodman
Our partner