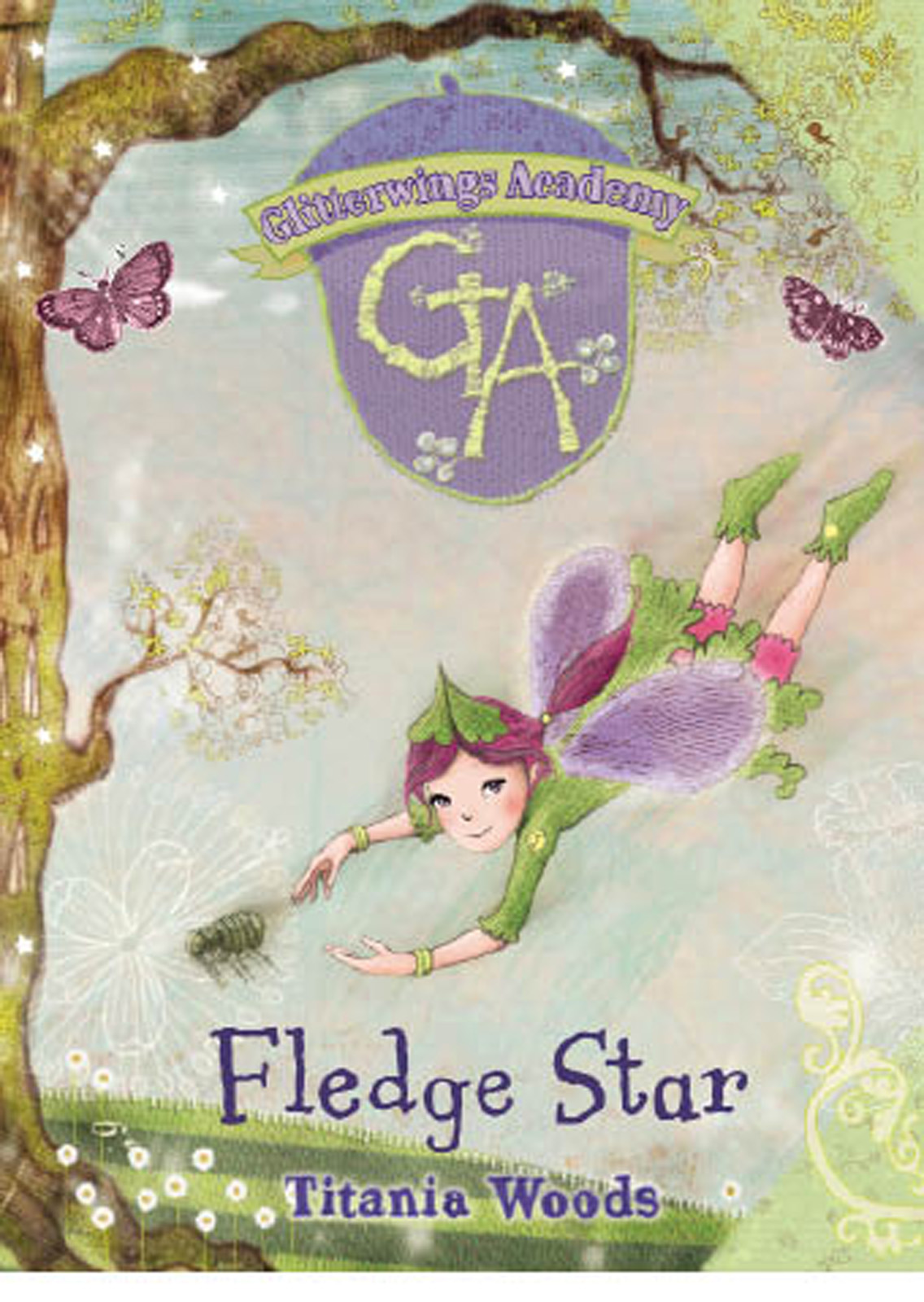 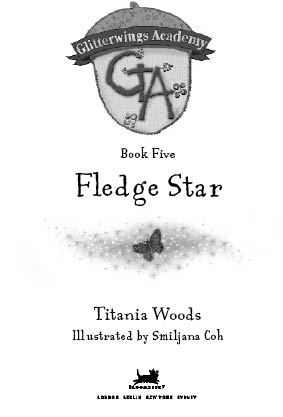 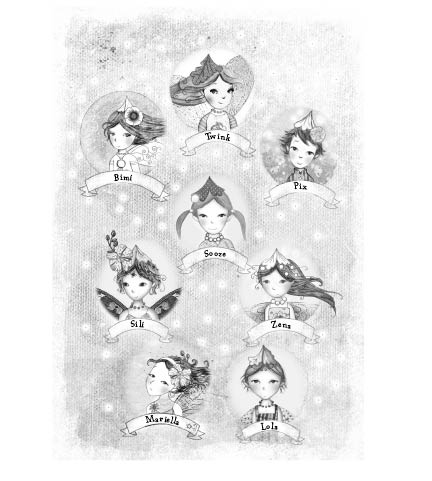 A new year at Glitterwings! Twink Flutterby flew eagerly over the flower-covered hill. Almost there . . . almost . . . and then, there it was! The great oak tree that housed Glitterwings Academy came into view, its leaves bursting with springtime. The tiny windows that wound their way up its trunk shone like pieces of sunshine.

âIsn't it beautiful!' exclaimed Twink's grandmother, flying beside her. She was accompanying Twink to school this term, as Twink's parents were at a Fairy Medics' convention. âI can see why you love it so much, my dear.'

Twink nodded happily. âIt's the most wonderful school in the world.'

Down below, a first-year student rode on a mouse, with her parents flying along overhead. The young fairy glanced up at Twink admiringly, and Twink felt very grown-up all of a sudden. She and her friends were Second Years now â not the babies of the school any longer.

Twink and her grandmother landed on the Glitterwings front lawn. Gran carefully patted her purple hair into place. âNow then,' she said, âwe just need to let someone know you're here.'

Crowds of young fairies flitted about the tree like hummingbirds, chatting and laughing. âTwink!' called a voice.

Twink looked up as a strikingly pretty fairy with dark blue hair and silver and gold wings landed beside her. âBimi!' she cried, delighted to see her best friend.

The two girls hugged excitedly, their wings fluttering so hard that they lifted off the ground.

âIt's so good to see you!' said Bimi as they floated back down to earth. âSending letters by butterfly just isn't the same. And guess what â we're going to be in the same branch together!'

Twink felt a wide smile spread across her face. âGlimmery! Oh, we're going to have such a brilliant term, I can tell already!'

âYes, excellent news,' said Twink's grandmother with a twinkle in her eye. âBut have you a hello for me as well, Bimi?'

Bimi's cheeks turned pink. âOh â sorry, Mrs Flutterby!' The term before last she had stayed with Twink's family for part of the holidays, and knew Twink's gran well.

âQuite all right,' laughed Gran. âNow, let's get you sorted, Twink, and then I can fly my tired old wings back home.'

Their new year head was Miss Sparkle. The stern Fairy Dust teacher gave Twink a brief smile as she ticked Twink's name off her clover-leaf pad.

âNice to see you, Twink. All you girls from last year are together again in Peony Branch, up near the top of the tree.' Miss Sparkle turned away to check someone else in, her thin white wings almost transparent in the sunshine.

Twink's gran gave her a warm hug, and patted Bimi's cheek. âHave a good term, girls. Don't get into any more trouble than absolutely necessary!'

âWe won't,' grinned Twink as her grandmother lifted gracefully off the ground. She and Bimi stood waving until Gran had disappeared over the hill, and then Twink scooped up her oak-leaf bag. âCome on! Let's go and see our new branch!' 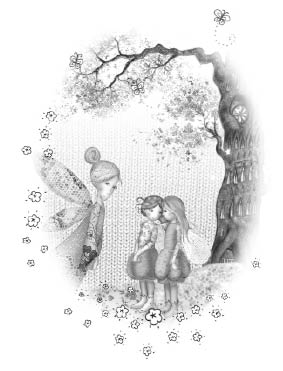 The two friends took off at top speed. Giggling, they dodged past a group of older girls and jetted through the open double doors at the base of the tree.

Twink stopped and hovered for a moment, drinking in the beauty of her school. The inside of Glitterwings Academy was a high, golden tower, with branch-corridors shooting off in all directions, and fairies flitting about as far up as the eye could see. Twink sighed happily. She could never get tired of seeing this, no matter how long she had gone to school here!

âHurry,' called Bimi over her shoulder, âor else we won't get beds next to each other!'

Jolted out of her reverie, Twink sped to catch up with her friend. Up and up they flew, passing classrooms and sleeping branches as they went. Twink felt a slight pang as they flew past Daffodil Branch, where they had lived last year.

Twink nodded. âIt doesn't seem right to think of anyone else living there. But I bet we'll like Peony Branch, too.'

The trunk narrowed as they neared the top of the tree. âLook, there it is!' cried Bimi. A large peony hung upside down over the branch entrance, its petals a rich, vibrant pink.

âHow pretty!' breathed Twink as they landed on the ledge. She eagerly pushed open the door, and her eyes widened. Their new branch was beautiful!

It curved gently to one side like a beetle's wing, with a whole row of windows sparkling in the sun. Green, mossy beds awaited each fairy, with a peony hanging over each one like a frilly canopy. Several of the other girls had arrived already, and were busy unpacking their things.

âOpposite!' shrieked a voice. A lavender-haired fairy launched herself at Twink like a whirlwind, hugging her hard. âWhat do you think?' she demanded, jumping up and down. âWe're all together again!' 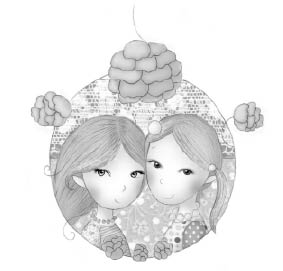 Sooze had lavender hair and pink wings â the exact âopposite' of Twink, who had pink hair and lavender wings. The two fairies had been best friends once, and Twink still liked Sooze, though she knew she had the best friend in the world in Bimi now. Unlike Sooze, Bimi could be counted on, no matter what!

Across the branch, a pointy-faced fairy with light green wings sniffed. âWell,
I
rather fancied a change. I told my mother that I wanted to be in Orchid Branch this term, but the school still put me in here.'

Sooze smiled impishly. âWhy, Mariella, what a coincidence! We fancied a change from
you,
as well. Are you sure you begged and pleaded hard enough?'

Mariella glared at her and whispered something to Lola, the thin little fairy who was her only friend. Lifting their noses, the two fairies turned away, fluttering their wings grandly.

âSome things never change, do they?' grinned Twink. âCome on, Bimi â let's take those two beds over at the end.'

She happily unpacked her oak-leaf bag, arranging the drawings of her family on her bedside mushroom. Her parents and little sister smiled out at her. Teena was very proud to have a big sister at Glitterwings Academy â and wild with impatience to start there herself next year.

Twink placed her thistle comb and a bottle of wing polish on her bedside mushroom as well, and then arranged her petal notepads in the bark cupboard beside her bed. âThere!' she said with satisfaction. âAre you finished, Bimi? Let's go and have a look around before the welcome back session in the Great Branch.'

Bimi laughed. âNothing will have changed in only three weeks, you know!' But she shut her bark cupboard and the two fairies flitted lightly from the branch, circling downwards.

A crowd of first-year students were just making their way up the trunk, riding on the backs of grey and yellow tits. Twink had to smile when she saw them hanging on to the sleek feathers for dear life. She remembered how terrified she had been, clinging to the back of a bird before she learned how to fly!

A crowd of fairies were hovering in the air, jostling together as they fought to see something hanging on the wall.

They struggled their way into the crowd, and saw a notice written on a large oak leaf:

Are you a fast flier?

Then come to the

One of the older students laughed. âPoor Madge â she still hasn't got over Glitterwings losing the Fairy Finals last year. She's determined to put together the best Fledge team ever.' 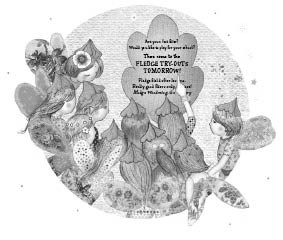 Twink stared at the notice. She had never played Fledge before, but she loved watching the high-speed game. It was probably a daft idea, but â but maybe . . .

Trust Bimi to know what she was thinking! Twink looked at the notice again, and sighed. âI'm not a good enough flier, Bimi. I'd get laughed off the field.'

Bimi drew her away from the crowd. The two fairies flew slowly along, drifting downwards past empty classrooms. âYou would not! You won the award for best flier in the entire school last year, didn't you?'

Twink rolled her eyes. âThat was only because I had just
learned how! It doesn't mean I'm good enough to play Fledge.'

âYou should do it,' said Bimi. âYou really are a good flier, Twink. And the worst they can do is say no, so why not?'

Twink hesitated as a flutter of hope stirred in her. âI don't know,' she said finally. âI'll think about it.'

The Great Branch was the largest branch in the school â a long, high space with gracefully arched windows. Bright glow-worm lanterns hung from the ceiling, and rows of mossy tables were lined up and down its gleaming wooden floors, with a different-coloured flower hanging over each one.

âThere we are!' she said, pointing to a table with a large pink peony over it. âWe're much nearer the back this year, aren't we?'

âThat's because we're not little First Years any more â they don't need to keep such a close eye on us,' grinned Pix, a clever red-headed fairy.

The girls perched on their spotted mushroom seats, watching as the rest of the school flitted in. Twink glanced across at the Daffodil Branch table. The fairies sitting at it all looked terrified!

When everyone was finally seated, Miss Shimmery, the HeadFairy, lifted up from the platform at the front of the Branch. The school fell expectantly silent as she hovered above them, her rainbow wings gleaming.

âWelcome back!' she announced in her low, rich voice. âAnd to all of our new students, a warm welcome.' She smiled down at the front row of tables. âWe hope you'll be very happy here at Glitterwings Academy.'

The Road to Gundagai by Jackie French
What Lies Behind by J. T. Ellison
TKG08 WE WILL BUILD Rel 01 by Anderle, Michael
Solitaire, Part 2 of 3 by Alice Oseman
Bran New Death (A Merry Muffin Mystery) by Hamilton, Victoria
False Accusations by Jacobson, Alan
Deadlier Than the Pen by Kathy Lynn Emerson
The Dark Lady by Dawn Chandler
Raining Kisses (The Opeth Pack Saga Book 2) by Sascha Illyvich
I Am Max Lamm by Raphael Brous
Our partner