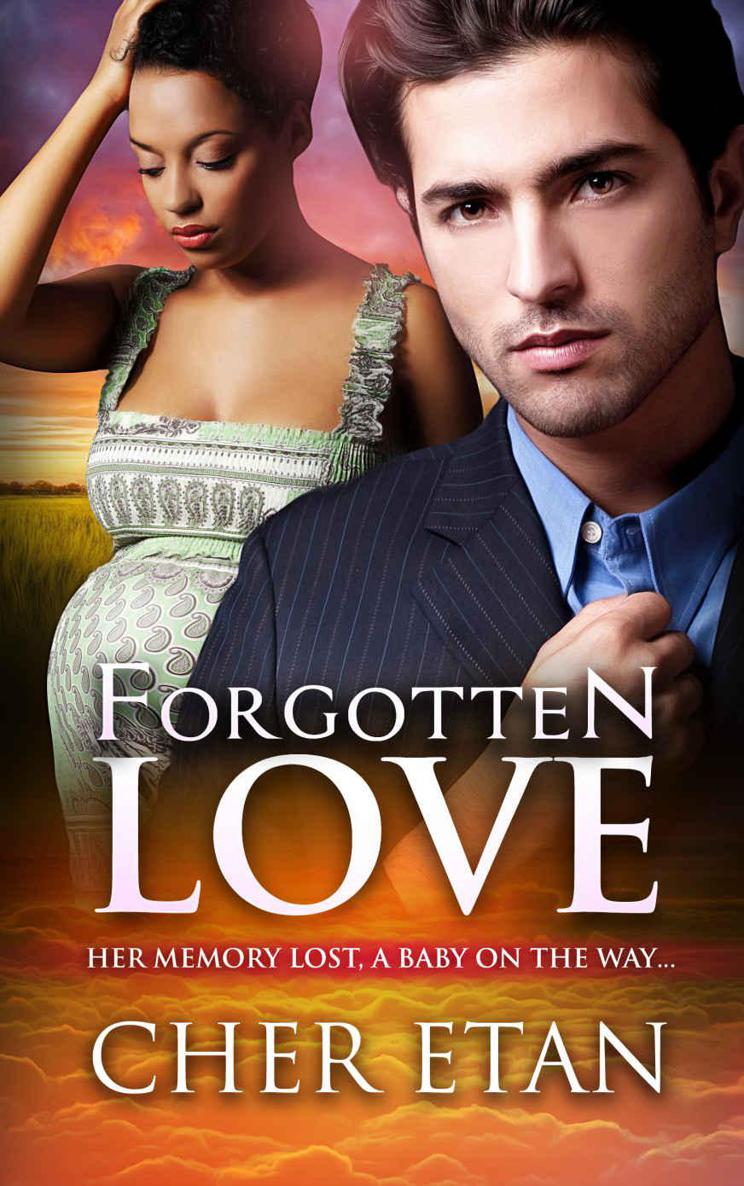 Forgotten
Love
Her memory lost, a baby on the way...

Brought to you by best selling author Cher Etan.

The story of childhood sweethearts Allen and Frances, and a moment
that changes their lives forever.

After a brutal accident leaves Frances hospitalized, doctors soon
discover she has amnesia.

With no recollection of who she or Allen is, the doctors go to work
on helping her recover.

But as they do, a shocking truth is discovered; Frances is pregnant!

A surprise to them both, now she must live in a house she has no
memory of and a husband she can't remember.

Can Frances regain her memory, rekindle forgotten love, and prepare
to care for her unborn baby?

Find out in this emotional yet sexy romance by best selling author
Cher Etan.

Suitable for over 18s only due to sex scenes so hot, you'll need a
fireman on stand by.

Get Another Contemporary And BWWM eBook Free!

Hi
there. As a special thank you for buying this ebook, for a limited
time I want to send you another two completely
free
of charge
directly
to your email! You can get it by clicking the cover below or
going
here
:

These
books are so exclusive you can't even buy them. When you download
them I'll also send you updates when new books like this are
available.

Copyright
©
2015 to Cher Etan and SaucyRomanceBooks.com. No part of this book can
be copied or distributed without written permission from the above
copyright holders.

Get
Another BWWM And Contemporary Ebook Free

“
You
want to leave me over some bullshit like this? Okay then, go! Leave!”
Frances began pushing Allen until his legs were outside the door.
Then she collapsed on the floor and cried until she had no more
tears. She didn’t expect that he would try to come back. He was
about as mad as she was. It wasn’t her fault; she was trying
her best. She couldn’t
help
the fact that her book had suddenly blown up; that she was now as
busy as he was. It wasn’t her fault they didn’t get to
spend as much time as they used to together. The problem with Allen
St. James is that he was spoiled; being the man with the money meant
that he didn’t have to wait his turn for everything. He was
always ushered to the front of the line, always the one who kept
people waiting. She’d stood by his side these ten years, ever
since they were two teenage kids who found themselves on the street
with no one to rely on but each other. Allen’s parents had been
killed in a plane crash coming back from the island of St. Maarten
where they’d been celebrating their twenty year anniversary.
Fourteen year old Allen had been left with an uncle for the duration.
When the dust had settled and the lawyers had departed, Allen was
left with a hundred and thirty million in assets and stock options
and a battle on his hands from his father’s former partner on
who owned what. As a result of the prolonged and ugly nature of the
case he was left at the mercy of a man who cared nothing for him. He
ran off at fifteen, opting to live on the streets rather than
continue subjecting himself to his uncle’s abusive behavior. He
would have been dead inside a week if he hadn’t encountered
Frances on his second day.

He was
hunched over behind a dumpster, having been robbed of all his
belongings but not yet hungry enough to sift through the garbage for
food. Frances was just coming off her shift; she worked as a
collector for a local bookie and had just finished her rounds. Sure
she was a small girl but she was also fast and she knew how to use a
baseball bat to lethal effect. She didn’t have to mostly; the
customers she collected from knew her, knew who she represented; and
knew what would happen to them if they tried anything weird. It was
illegal sure, and she spent approximately half her time dodging the
cops but it beat turning tricks for a living.

Normally,
she didn’t try to get too involved with other street kids; they
tended to want to suck you into their sorry existences –
whether it was sex or drugs or both. It was a downhill destination
and Frances wasn’t having any of it. She had a plan, and she
was getting out, going straight and legit. She was going to be a
writer. She already wrote; had pages and pages of short stories
beneath her bed. She wanted to get a locker to store it all in; she
knew that the bunker where she stayed wasn’t safe from vandals.
Still it was as secure as she could make it and it would have to do
for now. Something about this kid made her stop though. He wasn’t
the usual type of street kid. She couldn’t quite put her finger
on why though. Maybe it was that his face was just too clean; or his
hands were free of tracks…anyway, whatever the reason; she
stopped and stared at him.

“
Whassup
witchu?” she asked him. He looked right miserable slumped as he
was between the dumpster and the brick wall that housed the
neighborhood soup kitchen. It wouldn’t be open for at least
another four hours. He looked up at her with the most extraordinary
gray eyes she’d ever seen.

Frances
hesitated; she really should do as he said and keep walking. Her bed
was calling.

“
You
need help man?” she asked instead.

He
stared at her speculatively and she wondered what he was seeing.

What
Allen was seeing was
a
petite dark haired light skinned black girl
with
green eyes and the most unkempt hair he’d ever seen on a
female. It was long almost reaching halfway down her diminutive frame
and looked like it had about zero acquaintance with a comb. She
looked like a strong breeze could blow her over in spite of the
baseball bat she was holding in her tiny hand. She couldn’t be
more than ten years old and here she was asking
him
if she could help him?

“
I
got a bunker if you need somewhere to sleep,” she said, he
couldn’t tell if her complexion was naturally glowy or she was
blushing. Surely she wasn’t suggesting…

“
You
really shouldn’t invite strange men to follow you home you
know,” he told her chidingly.

She
laughed. He raised his eyebrows in disbelief as she stood there
laughing at him, a deep rich honeyed belly laugh that seemed to come
right from the center of her being. He frowned at her, wondering what
was so funny.

“
Are
you coming or not?” she asked still smiling.

Allen
was tired of the cold hard ground. He would be glad of a softer
surface to lie down on, maybe somewhere warmer. Maybe she had some
food she’d be happy to share with him? He didn’t like to
take advantage of a kid, but he was cold, hungry and tired.

He
followed her through convoluted alleyways until she disappeared into
a doorway he wouldn’t have seen if he wasn’t specifically
looking for it. He followed her tentatively, wondering for the first
time if this was a trick of some sort. The inside of the building was
dark and dank; with the far off whiff of sewage permeating the air.

“
Stay
close,” her voice floated back to him from some point ahead. He
hastened his footsteps to keep her white reflector jacket in sight.
It was the only thing he could see in the black hallway. He heard a
door open and then she switched on a light and he could see into the
room. It was tiny, with a mattress on the floor, another baseball
bat, a cardboard box with items on it that might be knick knacks or
treasured family heirlooms for all Allen knew. There were also two
pairs of shoes resting neatly side by side next to the bed; a pair of
Nike sneakers and a pair of black boots. Allen’s eyes traveled
to her feet; she was wearing another pair of sneakers, threadbare and
old.

“
You
can have the floor,” she said gesturing to an empty corner of
the small room. He crossed to it as she flopped onto the mattress,
fiddling with something Allen couldn’t see. The whir of a
machine suddenly filled the room with sound and Frances placed a
small box like gadget next to her mattress. The room warmed slowly.

“
Electric
heater,” she said burrowing into her duvet and curling up.
“Goodnight.”

Frances
seemed to drop off to sleep and Allen was surprised at her ability to
just relax her guard in front of a total stranger like him. Surely
she knew better than that! Sure she had her baseball bat next to her
but still…he looked around searching for something to use as a
pillow. There was a pile of clothes nearby and he pulled the whole
thing closer and placed his head on it. It was soft and the room was
warm. He folded his hands on his chest and went to sleep.

He woke
to the smell of food permeating the tiny space. His stomach growled
in response to the stimuli and he sat up almost before he’d
even thought about it. Frances was fiddling with two paper plates
containing French fries and cheeseburgers.

“
Good
morning,” she said without looking up.

“
Morning,”,
he replied eyes on the food.

“
Bathroom
is down the hall if you want to freshen up,” she said. Allen
struggled to his feet.

“
Thank
you,” he said padding across the room and opening the door. The
hall wasn’t so dark, a sliver of light illuminated the way to
the bathroom. Allen hoped it wasn’t too gross; he put his shoes
back on and walked cautiously down the hall. He pushed open the door,
instinctively holding his breath. The bathroom though, was
surprisingly clean. Clearly someone took the trouble to keep it that
way. Allen used the facilities and then washed his face and hands and
went back to the room.

“
What
is this place?” he asked. “Do you live here by yourself?”

Frances
just looked at him with an inscrutable glance. “You didn’t
give your name,” she said.

“
Sure.
I’m related to the hotel mogul; it's why I’m living in
this palace.”

“
No
need for sarcasm,” he mumbled sitting down next to her and
taking the plate she handed him. He tucked into the food
concentrating on eating. He needed to find a way to pay her back for
the food and board. Maybe he could offer to be her bodyguard?

“
How
can I repay your kindness?” he asked.

Frances
said nothing just continued to eat; only darting an eloquent glance
in his direction as if to tell him to shut up. He continued to eat in
silence, taking her lead.

Rose Bride by Elizabeth Moss
The Stormchasers: A Novel by Blum, Jenna
Generation Chef by Karen Stabiner
Maya's Notebook: A Novel by Isabel Allende
Forget Me Not, by Juliann Whicker
Miracle (The Pagano Family Book 6) by Susan Fanetti
The Telling by Ursula K. Le Guin
Dogstar Rising by Parker Bilal
Survivalist - 12 - The Rebellion by Ahern, Jerry
GoodHunting by Kannan Feng
Our partner