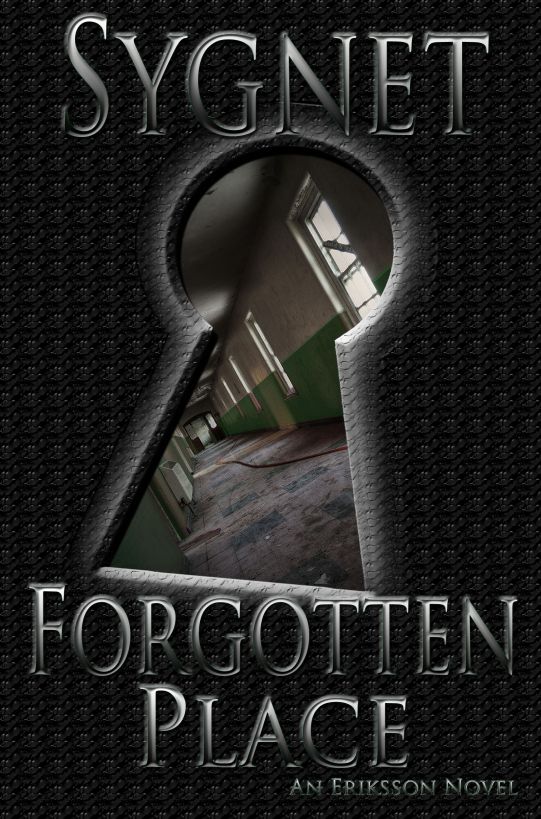 Copyright 2012 LS Sygnet
,
Smashwords edition.  All rights reserved.  No part of
this book may be used or reproduced in any manner without
permission except in the case of brief quotations.

This book is a work of fiction.  Names,
characters, places and incidents are fictional or used
fictitiously.  Any resemblance to actual events, locales or
persons, living or dead, is coincidental.  All rights
reserved.  No part of this publication can be reproduced or
transmitted in any form or by any means, electronic or paper print,
without written permission from LS Sygnet.

The Eriksson Series by LS Sygnet

Before reading this book, I
must forewarn and claim
caveat
lector
. First, I have worked with the
mentally ill since the mid 1980's, and you could say that it has
been my passion, my life's work, the one thing that no matter what
else came along, I always remained tethered to in some way, shape
or form.

Yet not all of the things
in Forgotten Place are created by my imagination. And while I have
seen some horrific things
in a historical
context only
, those treatment modalities
are either no longer used, or are done in a humane manner. Yes, I'm
sure you've guessed, there is some dark age psychiatry in this
book. It is brief, and not particularly explicit, but it's
there.

Over 20 years ago, I saw the old "treatment
room" in a state psychiatric hospital. It was kept mostly intact to
serve as education, a stark example of how much psychiatry has
advanced over the years. I remember that it scared the crap out of
me. I cared for people who suffered such "treatments" doled out in
the 1950's and 1960's, heard their stories, wondered how much was
true, how much was confabulation if not downright delusion… until I
saw that treatment room.

I felt a wave of gratitude that things have
improved in the last half-plus-century. For if things had not
improved, I would not be able to do what I do professionally.

So when you read "that segment" of Forgotten
Place, know that it is rooted in a historical reality that
psychiatry cannot erase, but no longer practices anymore. Just like
physicians no longer bleed folks with leeches, or lop off limbs as
a first resort.

The Eriksson Series by LS
Sygnet

The dull misery of springtime segued into
torrential summer storms with damp, chilly nights.  Moisture
beaded on windowpanes whether rain fell or not.  Autumn was
soggy.  Wet leaves fell and rotted on peaty earth.  Cold
winds, dank and moist chilled even the well-insulated bodies to the
bone.  By wintertime, the local's promises that it never snows
in Darkwater Bay felt empty to me.  Who cared about a few
flakes, when the perpetual rain and fog only abated for dark dreary
skies?

It felt like life at the pole without the
sixty-below wind-chill.  Even daylight felt like dusk, and it
didn't last long enough to pull me out of the boggy depression that
made only one activity appealing – curling up in bed and sleeping
through life until my bones mended and I could escape wet-hell and
all its varied shades of gray.

I curled into a ball at the end of the sofa
and let the natural gas flame in the fireplace hypnotize me through
another vapid day of existence.  The sparkling white wine
glowed in the dancing orange-yellow light.  I watched the
little bubbles appear at the bottom of the crystal and effervesce
to the top before disappearing.

The crisp bite normally
appealed to my palate, soothed me in a complimentary way by the
sweet, fruity flavor.  Tonight it tasted bitter as
Alka-Seltzer on my tongue.
This is
what depression feels like.  I don't have the energy to move,
the desire to fix this, the will to push
forward.
Random thoughts on the
futility of my existence bubbled in my brain, much like those in
the wine glass.  Would prison be worse than life behind the
closed doors of my heart?

If he really cared, he wouldn't have
listened when you threw him out and told him things were
finished.  So much for his dire warnings about not leaving,
this mythical point of no return.

Invariably, my misery came back to rest at
the feet of Johnny Orion.  Part of my psyche knows he's a
convenient excuse, the face that for some reason I attached to my
misery, the broad shoulders strong enough to carry the blame for
mistakes I no longer wanted to own as mine.  The other part of
my psyche isn't quite willing to be so dishonest.

If it weren't for Orion, you wouldn't know
that Wendell is alive and well, that he doesn't hate you.  On
the contrary, he loves you enough to teach that meddling dolt Orion
how to cover your mistakes and throw the blame onto someone who
deserved his day in court.

Until recent weeks, I never understood how
vast the disconnect between the heart and the psyche truly can
be.  My mind is ripped in two, one hemisphere hating Johnny
for interfering in my personal life, the other lauding him for
making obvious the subtle plan I tried to put into motion when my
ex-husband died.

My heart?  I simply tried not to listen
to its yearnings, or how much it suddenly despised the lack of
company.  And that loss went far beyond the presence or
absence of Johnny Orion.

I started having my groceries (mostly wine)
delivered.

If I could've paid the doctor to make house
calls to evaluate my shattered bones, I'd have done that too.
I went so far as to hide in the sanctuary of the third story room
of my house where all the precious mementos from a life long dead
had been squirreled away while the housekeeping service did its
thing once a week.

Maya started leaving
threatening messages.  Statements like,
don't make me break in to see that you're all right,
Helen.  This has gone beyond ridiculous.  Call me
back.

Sometimes I wonder if we don't learn
passive-aggressive behavior by studying psychology.  She
wanted a return call?  Fine.  During normal business
hours, I'd call and leave messages for her at home.  Maya's a
savvy woman.  That tactic won't work forever, nor will my
excuse that she's got enough on her plate dealing with work and
chemotherapy to be worried about little old me and my nicely
healing gunshot wound to the shoulder.

One of the nicest things about natural gas
fireplaces is that the flame doesn't die until you shut off the
fuel source.  Snuggled under an afghan, I watched the fire
lick the ceramic logs until my eyelids grew too heavy to remain
open.

That was when my real misery began.  It
takes a lot of conscious effort to keep thoughts of my father from
haunting me.  It's a skill I have not mastered during sleep
when the subconscious mind slips into the driver's seat.

His face had not fully
materialized through the haze in my mind when reality jerked him
away from me again.  The shrill sound jarred me awake and left
me feeling lost and confused.  Telephone ringing.  Hadn't
I switched it over to voicemail?  Perhaps this
was
the dream and I would
hear Dad's voice if only I would answer this time.

I reached for the cold plastic appliance and
clicked on.  "Eriksson."

Thud
.  Or maybe it was a splat.  There was a distinct
sound when my heart hit the floor.

"Please don't hang up the phone."

I swallowed half my tongue and whispered,
"Okay."

The soft laughter warmed the bone-deep cold
that hadn't seeped away for months.  "This is a hell of a lot
easier than I expected, Doc.  Should I be worried?"

"Why are you calling, Orion?"

Hope deflated on a soft sigh.  "People
are worried.  For some inexplicable reason, they thought I
might make more headway talking some sense into you than anyone
else has.  But..."

My mind's eye saw him shrug.

"I appreciate the concern, but it's really
unnecessary.  I'm fine."

"Yeah, I figured that much out on my
own.  Shelly Finkelstein wants to know when you'll be cleared
for active duty.  Something about her intent with that
contract you signed in October not including months of convalescent
leave as part of the eight month deal."

"How very sensitive of her.  Perhaps I
should contact a lawyer and see what it would take to buy my way
out of our arrangement."

"Helen, I wish you wouldn't do that."

Yeah, we both knew what he wished.

"
Are
you all right?  Am I allowed
to ask that, to tell you that I'm worried too?"

"Have you started physical therapy yet?"

"Last week."  Damned rules.  I
didn't understand why they insisted on seeing me at the hospital
for outpatient therapy.  Hadn't I made it clear as a bell that
I was more than willing and able to pay for private therapy at
home?  My sole consolation came from being the first
appointment of the day.  Arriving at six-thirty drastically
decreased the odds of bumping into people who knew me.

The ache in his voice floated into my ear
like a dagger searching for its most direct path to my heart.
"I take it therapy is going fine too."

"Is this really why you called me?"

Don't ask what I expected him to say.
I'm not sure.  Like I said, I've had issues with disconnects
between the brain and my heart, not to mention the separate halves
of my brain.  Maybe he'd do me a favor and get pissy with me,
defensive at least.  It would inspire a little bit of
energy.  It takes a lot of vigor to sustain rage.

Orion plays dirty.  This much I learned
when he butted into my little problem and decided that Eddie
Franchetta made a much better murder suspect than I did.

"I miss you, Helen.  I keep praying
every day that you'll pick up the phone and call me, that maybe you
miss me a little bit too.  How much longer do I have to stay
away to prove to you that everything has worked out for the
best?  What more can I say or do to convince you that I would
never betray someone I love the way I love you?  Tell me,
because it's killing me, having you so close but never seeing you
or hearing your voice."

He did, damn him.  My heart squeezed
painfully at the respect he always gave me.  We sat breathing
at each other for a long time.  Johnny tipped his toe in to
the piranha-infested lava pool of conversation first.