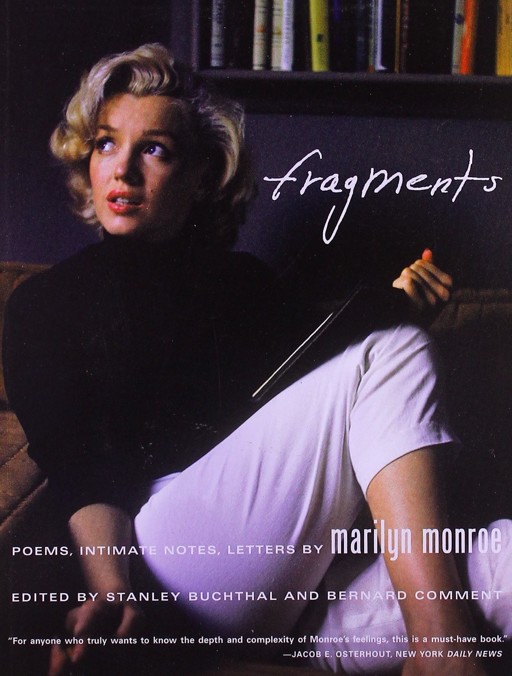 A Note to the Readers of the Electronic Edition of
Fragments

Fragments
was originally formatted for hardcover publication, and though every effort has been made to simulate the original book’s layout and design features for the electronic edition, the arrangement of the e-book text does not always correspond to the original version. The transcripts of Marilyn Monroe’s writing feature text in various colors, indicating where editors have made corrections for clarity; on a black and white device, the alterations will not be differentiated. Finally, to adapt the book to an electronic format, image resolution has been reduced. For higher resolution versions of all of the images, please consult the hardcover edition.

Written answers to an interview (1962)

Some books from Marilyn Monroe’s library

Norma Jeane Mortenson was born under the sign of Gemini, and she described herself as having two natures: “Jekyll and Hyde, two in one.” Even the initials of her stage name (which, according to one story, were suggested to her by the clearly visible “M”s formed by the lines of her palms) supported this duality, as did the pseudonym, Zelda Zonk, that she used while escaping incognito from Hollywood to New York.

In her lifetime, under pressure from the studios, the media created a joyful and radiant image of Marilyn Monroe, even to the point of making her out to be a “dumb blonde.” One remembers her parts in
Gentlemen Prefer Blondes
,
The Seven Year Itch
,
How to Marry a Millionaire
, and
Let’s Make Love
. Anything contrary to this artificial image was not welcome. There was no room for a melancholic Marilyn. The icon was not allowed to have an opposite side.

Yet, like a medal, she did have two sides. The sunny and luminous one of the sparkling blonde, and the darker one of the excessive perfectionist who sought absolutes and for whom life (work, friendships, and love affairs) could only lead to disappointment. “I think I have a gay side in me and also a sad side,” Marilyn confided in an interview.

Her friend Marlon Brando expressed perfectly the shock people felt when her death was announced: “Everybody stopped work, and you could see all that day the same expressions on their faces, the same thought: ‘How can a girl with success, fame, youth, money, beauty…how could she kill herself?’ Nobody could understand it because those are the things that everybody wants, and they can’t believe that life wasn’t important to Marilyn Monroe, or that her life was elsewhere.”

There are thousands of photographs of this icon. Her image has been used in many, sometimes brutal, ways. But in this book a new world of truthfulness and overwhelming clarity is being thrown open. A hitherto unknown and unseen Marilyn is revealed.

On her death in 1962, Marilyn Monroe’s personal possessions were bequeathed to Lee Strasberg, and when he in turn died in 1982, his young widow, Anna Strasberg, inherited this large and uncataloged collection, which included dresses, cosmetics, pictures, books, receipts, and so forth. Many years later, while sorting out Lee Strasberg’s papers, she found two boxes of poems and other manuscripts written by Marilyn. Not knowing what to do with these, she asked a family friend, Stanley Buchthal, for advice. Some months later, at an art collectors’ dinner, Stanley told Bernard Comment, a French essayist and editor, about Anna Strasberg’s find in order to get his opinion of the unpublished materials. That was the start of the adventure that became this book.

As far as has been possible to determine, the texts are placed in chronological order. Words printed in red are the editors’ and correct spelling mistakes, add missing words, or suggest possible readings of indecipherable words. The ordering of fragments of very disparate documents has been an attempt at reconstruction and hence at interpretation. The flow of Marilyn’s thoughts on individual pages, and from one successive page to another, is indicated by red arrows (black arrows are Marilyn’s own).

It is possible that other texts written by Marilyn will surface in the years or decades to come. For the moment, this book contains every available text, excepting her technical notes on acting. In any case, these writings reveal a young woman who was dissatisfied with issues of surface appearance and who was seeking the truth at the heart of both things and people.

Only lovers of clichés will be surprised that the Hollywood actress was passionately fond of literature, although this fact cannot be illustrated merely by the pictures collected in this book. (Still: how many actresses from that period do we know who sometimes took pains to be photographed reading or holding a book?) In a 1960 interview with the French journalist Georges Belmont, Marilyn recalled the beginning of her career: “Nobody could imagine what I did when I wasn’t shooting, because they didn’t see me at previews or premieres or parties. It’s simple: I was going to school! I’d never finished high school, so I started going to UCLA at night, because during the day I had small parts in pictures. I took courses in the history of literature and the history of this country, and I started to read a lot, stories by wonderful writers.” Her library contained four hundred books, ranging from such classics as Milton, Dostoyevsky, and Whitman to contemporary writers, including Hemingway, Beckett, and Kerouac.

Arthur Miller played a part in her development as a reader, too, recommending Carl Sandburg’s six-volume biography of Abraham Lincoln, which she devoured. But some years before they were involved, Marilyn had already tackled James Joyce’s
Ulysses
.

As we know, Marilyn inspired numerous painters: Dalí, De Kooning, and Warhol, among others. She also felt a real interest in painting—in the painters of the Italian Renaissance, such as Botticelli; Goya, especially his demons (“I know this man very well, we have the same dreams, I have had the same dreams since I was a child”); Degas, whose ballet dancer she gazed at in wonder when taken to see a private collection; and also Rodin, whose
Hand of God
she admired at length in the Metropolitan Museum of Art.

From all these examples emerges a cultured and curious Marilyn who had a strong desire to understand others, the outside world, destiny, and, of course, herself. She took notes, swiftly setting down her feelings and thoughts and expressing her wonder. Some may be surprised at her spelling mistakes, in which, most probably, a form of dyslexia is detectable. But readers of Marcel Proust’s correspondence (Marilyn read
Swann’s Way
on the set of
Love Nest
in 1951) will have seen worse. The very Proust who, answering the question “to which failings are you most lenient?” replied unhesitatingly, “spelling mistakes,” and who, in one of his letters, wrote this strange and beautiful phrase: “Each spelling mistake is the expression of a desire.”

The collection of documents revealed here is nothing less than a treasure trove. We owe its appearance to Anna Strasberg and her sons, Adam and David, who, during the preparation of this book, have embraced the opportunity to uncover a hitherto undervalued, even unknown dimension of Marilyn’s personality. From beginning to end we have shared their desire to create a book that, we would like to think, would have pleased its author. Marilyn once confessed to a journalist: “I think Lee probably changed my life more than any other human being. That’s why I love to go to the Actors Studio whenever I’m in New York.” Perhaps Strasberg, more than other people, had sensed who Marilyn really was.

One of the remarkable insights these documents offer is the sense that Marilyn was, until the end, planning for the future. Among other projects, she hoped over time to play the great Shakespearean roles, from Juliet to Lady Macbeth. She also pursued her idea of creating a new production company in association with Marlon Brando.

Some texts will give rise to interpretation and comment. But there is nothing dirty or low, no gossip in this book; that was not Marilyn’s way. What the notes reveal is intimacy without showiness, the seismic measuring of a soul. They take nothing away from Marilyn’s mystery but rather make the mystery more material. She was an elusive star with a magnetic force that sent compasses haywire whenever she got close.

To this day, her face, her eyes, her lips appear all around the world. Innumerable actors and pop singers take her as a reference, a definitive model: to sound like her, to act like her, in advertisements and music videos and films. Songs are composed for her—among them this famous one, by Elton John and Bernie Taupin: “Goodbye Norma Jeane (…) / Loneliness was tough / The toughest role you ever played / Hollywood created a superstar / And pain was the price you paid / Even when you died / Oh the press still hounded you / All the papers had to say / Was that Marilyn was found in the nude.”

This book does not attempt to show her stripped bare but, rather, simply as she was. Through these poems and written papers, she’s more alive than ever. 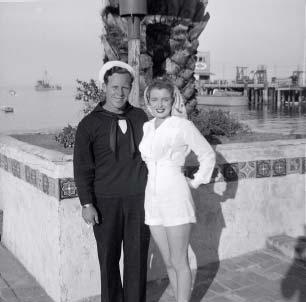 Rendezvous in Rome by Carolyn Keene
6 Rainier Drive by Debbie Macomber
Dying Fall, A by Griffiths, Elly
We Saw Spain Die by Preston Paul
Ascending Darkness (Shattering the Darkness) by Jessica Spoon
Fire Raven by McAllister, Patricia
Justinian by Ross Laidlaw
Every Heart by LK Collins
The Sweet Life by Rebecca Lim
Seducing the Doctor (At First Sight #4) by Janet Lane-Walters
Our partner