Read From the Chrysalis Online 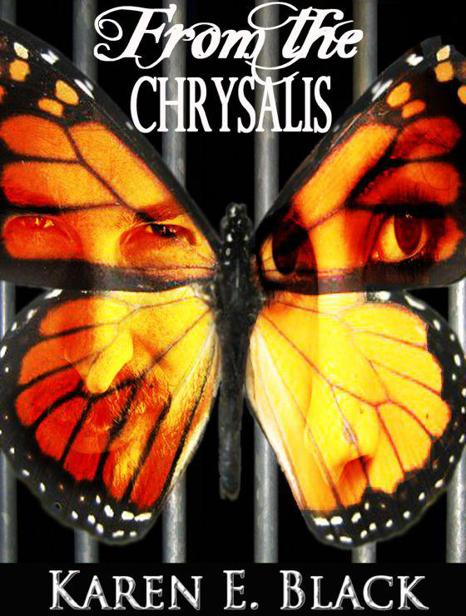 A novel by Karen E. Black

All rights reserved. No part of this book may be reproduced without written permission, except for brief quotations to books and critical reviews. This story is a work of fiction. Characters and events are the product of the author’s imagination. Any resemblance to persons, living or dead, is purely coincidental.

I have been struck by two facts; the extraordinary sympathy or similarity between the pair. He is her cousin, which perhaps accounts for som
e of it. They seem to be one person split in two.

Who hurt you so, My dear?

When you were very young,

Did, said, became, was... something that you did not know

Beauty could ever do, say, be, become?-

So that your brown eyes filled

With tears they never, not to this day, have shed...

Not because one more boy stood hurt by life,

No: because something- deathless had dropped dead-

An ugly, an indecent thing to do-

So that you stood and stared, with open mouth in which

Froze slowly backward toward its root,

As if it would not speak again, too badly stung

By memories thick as wasps about a nest invaded

To know if or if not you suffered pain.

*[Millay, Edna St. Vincent, Mine the Harvest: A

A shadow fell across her path as she rounded the veranda. A long shadow for so late in the day. Her eyes followed the shape as it stretched across the worn boards, then stopped when she recognized the source, still as a statue in their Aunt Sadie’s garden.

She resisted the urge to touch him, to convince herself he was real. People said she could write a little, but words never said enough. If only she could take pictures or draw. Something that would freeze her cousin, D’Arcy “Dace” James Devereux, at eighteen. There was just something about him.

A bottle of beer dangled from his fingers, so maybe he had slipped out the back porch door of the farmhouse, through a phalanx of his elders. When he cracked a smile she was so startled she stepped backwards, disturbing a pair of butterflies which hovered by her head. He spoke, though she didn’t see his lips move, and she was so busy listening to the sound of his voice she almost didn’t hear what he said. The words were low and sounded a little rough. No wonder—his voice was never used.

“Little Liza,” was all he said. He held out his brown bottle to her, an unfathomable expression in his eyes.

She recognized a little bit of their Granny Debo in him, as well as some of his father, but there was also something that was just him. She ignored his offering. He hadn’t said a word to her all day. Besides, she had a monarch on her right shoulder which was far more interesting than a bottle of beer.

The butterfly explored, lured by false promises in her yellow shift, and Dace and Liza watched the insect probe the shoulder seam of her dress. Aunt Sadie’s garden was full of massive yellow sunflowers and wild lupine. Besides Liza’s monarch suitor, butterflies flitted everywhere: Black Swallowtails, Clouded Sulphurs, Painted Ladys and Red Admirals. The last two were sometimes mistaken for monarchs, but Liza could distinguish the orange and black markings of all three species by now. When she was twelve, she had brought a book called
Field Guide to Butterflies
to the farm, much to the amusement of her relatives. Despite their teasing, she had taught herself to recognize the more common species.

Liza was afraid to move and even more afraid to speak. What if she disturbed her guest?

“I’ll bet he thinks you’re a flower,” said Dace. She watched him tip the beer to his lips and knock it back in two swallows. In a flash, she realized he had become a new man. His almost black eyes lit with amusement, his full mouth softened, and he relaxed. “You kind of look like one, you know? All that hair, your long legs, your little dress …”

“Yeah, right,” she whispered. She stood frozen, her head on her shoulder, hair spilling down the left side of her chest. “He just thinks I’m food. Are you old enough to be drinking that?”

“It’s okay. Uncle Eddie pried the cap off with his teeth and gave it to me the moment I moved. For some reason he looked mighty glad to see me go. Probably wanted to talk about me. Hey, little girl, don’t look so scared.”

“Why? What’s there to talk about?” she asked softly. This was too much for the monarch. It fluttered away, joining the others.

“Man stuff,” he said, his eyes still on the butterfly.

“Is it something bad? Aunt Debby said—”

He waved a hand, dismissing what she’d said. “I love the aunts, but they don’t know crap. I’m not supposed to talk to anyone. The lawyer said … Ah, never mind. I don’t care what that goofball says.”

Liza’s brow tightened. Nothing was going right. She had waited all afternoon to talk to him and now he wasn’t making any sense. “A lawyer? You have a lawyer? Why?”

Dace shook his head. “You ask
way
too many questions. Like I said, I’m not supposed to talk to anyone. Especially a little girl like you. What are you, thirteen, fourteen now? Besides, it’s not just me. There’s a bunch of other people involved. Rick, my friend, all we wanted was some beer and suddenly all hell broke loose. Oh, heck. I can’t—” He stopped mid-sentence, an anxious, black look almost ruining his face.

“Everybody in Maitland. And my father. He wanted me to come here today as a show of faith and now even he can’t stand the sight of me. Not that I blame him. Nobody could.”

“Uncle Norm? Why would he … why would anybody blame you for anything?” She thought a moment. “What … What did you do? Peddle drugs? You didn’t sell drugs, did you?”

“Liza, for God’s sake, of course I didn’t peddle drugs! I want to play pro football someday.” He chuckled, but it didn’t really sound like laughter. “
Wanted
to. Fat chance now. What Dad actually said was: ‘Watch out for that strange little girl who’s always following you around’.”

He let the empty beer bottle slide to the ground, then lifted her hair away from her face so that the backs of his fingers brushed her jaw.

Something funny exploded in her chest and for a moment she couldn’t breathe. She felt like she had climbed too many stairs. She wanted him to touch her again, but she also wanted to argue with him, to fight, to set him right.
Don’t you dare throw your beer bottle in Aunt Sadie’s garden, you big oaf,
she nearly said.

“What do you mean?” she asked instead, rising on her tiptoes until her eyes were almost level with his. “When was the last time I saw you?” When? At his own mother’s funeral? She knew he’d been there for sure. “You weren’t even at Granny Debo’s funeral last March. Both your father and Rosie were. I looked for you all over the place. Even if you weren’t at the rest of our stupid family dos, you should have been there.”

Dace shrugged. “Well, that’s what he said.” One of his shiny black shoes booted the beer bottle into a bed of double pink Impatiens and silver Dusty Miller.

Liza’s face went hot. “He did not!” she shouted and left the garden, running off in the direction of the pond. That was another place she liked to visit by herself. If the pond were anything like last year, the water wasn’t much, but there would be bulrushes. Maybe even a great Blue Heron. Besides, she had to get away from Dace. Had to. Or … what? It didn’t matter. Getting away was the right thing to do.

She spied a big, black motorcycle ahead of her, propped against the fence. Motorcycles all looked the same to her. It must have been his; nobody else at the farm had one. They had a tractor maybe. A bike was way too impractical. They were more like toys. Had Uncle Norm followed Dace all the way from Maitland to the farm in his Ford? If Liza had known how to ride a bike, she would have taken it. The hell with him, the way he looked, the story in his eyes, the touch of his hand … He was such a phony. And the sun was too bright. It hurt her eyes. No wonder she couldn’t think straight.

The shortcut to the pond veered off through a patch of tall grass. Liza was full grown at five and a half feet tall, but the grass was so high at this time of year she had to part it with both hands. Panting, she slowed to a walk, self-conscious enough to fear observation from the farmhouse by both the living and the dead. Of course people were watching. They always were.

Although she pretended not to notice, he caught up with her in a couple of strides, walking in her grassy tread. Clouds of dragonflies and iridescent green grasshoppers rose in the air. He’d taken off his tie and looked less immaculate in his open-necked shirt. More like the boy he used to be.