“Did it ever occur to you that maybe they’re just not funny?” Punch asked.

Monterey Jack yelled, “Now it is time to separate the men from the boys!”

“I think he means he’s going to kill us,” Bob Foster told me.

The four cheeses surrounded Bob Foster, Punch, and me, pushing us through a doorway and into a tiny room just big enough for the three of us. Once we were inside, the door shut behind us. The only furniture in the room was a chair.

“You’re in a pickle, Funny Boy!” Monterey Jack hollered through the door. “You don’t have a ghost of a chance. Pack it in. The writing is on the wall.”

I looked around. The walls were a pleasant off-white, with blue trim but no writing.

“What are you going to do with us?” hollered Bob Foster.

Suddenly, a spray of creamy yellow goop shot out of a pipe on the ceiling.

It splattered over all of us.

“What’s that stuff?” Punch asked. Bob Foster dipped a finger into the yellow goop and tasted it.

“That’s right,” Mozzarella shouted from outside. “We will fill the room with Cheez Whiz until you are all dead! This is what we are going to do to Earth! Enjoy the rest of your life, Funny Boy! What’s left of it! Hahahahahahaha!” 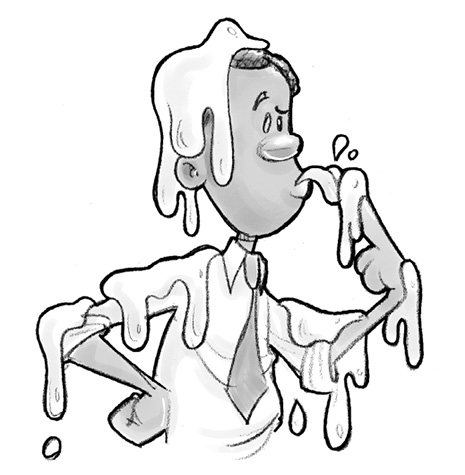 “We’re doomed!” Bob Foster moaned. “If the cheese reaches the ceiling, there will be no air left.”

“We’re going to drown in cheese!” Punch wailed. “What a horrible way to die!”

So, how are you enjoying the story so far? Exciting, isn’t it? Do you think Funny Boy can escape from these cliché-cracking cheeses? Or is it all over for him? Will the President do anything to save him? What about Punch? Will she ever be able to get the Cheez Whiz out of her fur? Will Bob Foster still have cheese as a hobby, or will he get a life? Will Monterey Jack ever run out of clichés?

THE BIG SURPRISE ENDING THAT WILL COMPLETELY SHOCK YOU, UNLESS YOU ALREADY GUESSED IT.

The tiny room was almost completely filled with Cheez Whiz. Bob Foster and I climbed up on the chair so we could breathe the little air that was remaining at the top. Poor Punch was covered with cheese. I held her above my head. “We’re goners!” Bob Foster shouted, spitting Cheez Whiz. “There’s no way out!”

The level of Cheez Whiz kept rising. I was standing on my tiptoes to keep my nose out of it. A few more seconds and it would be over my head.

You’re just dying to know who it is, aren’t you?

And standing there at the door was ... Tupper Camembert!

“Tupper!” I shouted. “What are
you
doing here?” 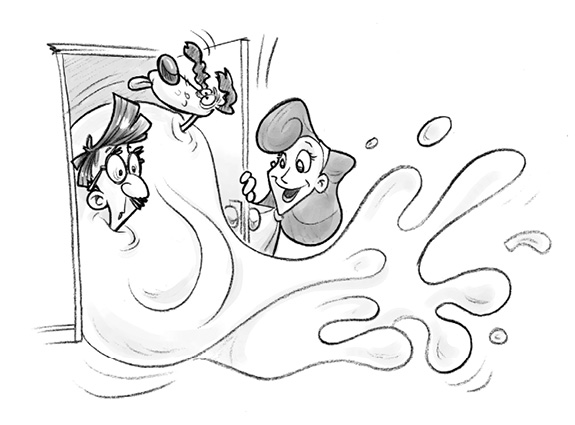 “Saving your life, my darling!”

“I saw you on TV at that press conference,” she explained. “You were so brave, so manly. Instantly I fell in love, hopelessly in love.”

Bob Foster, Punch, and I stumbled out of the cheesy room, the Cheez Whiz dripping off us.

“See for yourself,” Tupper grinned, motioning to the side.

Behind her were four gigantic plastic containers. Trapped inside them were Monterey Jack, Fontina, Romano, and Mozzarella. 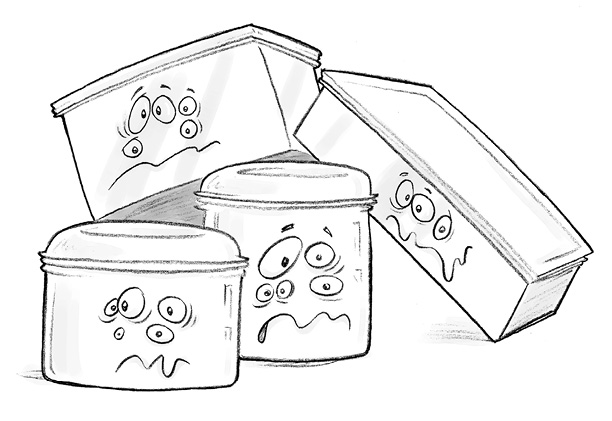 “Of course!” Bob Foster exclaimed. “Tupperware is the perfect container for storing just about any kind of leftovers! And they’re dishwasher safe, too! Why didn’t I think of it sooner?”

“You see,” Tupper continued, “my great-great-grandfather was Earl S. Tupper, the inventor of Tupperware. I was named after him. I can get Tupperware in any size or shape that I want.”

“That is the lamest explanation for a rescue I have ever heard,” Punch said, shaking her head.

“Actually, I think the explanation in the second Funny Boy was even more lame than this one,” declared Bob Foster.

“Hold your horses!” Monterey Jack hollered from inside his Tupperware prison. “Can’t we bury the hatchet, clear the air? We have no ax to grind. It was all much ado about nothing.”

I strolled over to Monterey Jack. “So,” I gloated. “Now the glove is on the other hand!”

“You mean the shoe is on the other foot,” Monterey Jack moaned.

“Right. I was never very good with clichés,” I admitted. “You know, Monterey, this Tupperware you’re in is microwavable. ...

“No!” the cheeses shrieked.

“Forget about microwaves,” Tupper suggested. “I disabled the joke deflector. Why don’t you just tell some of those funny jokes of yours?”

“You really think my jokes are funny, Tupper?”

“Hysterical!” Tupper exclaimed. “Won’t you tell those cheeses some jokes and save the world ... for me?”

“I’d rather be microwaved,” Mozzarella moaned.

“For you, Tupper, anything. Okay you cheeses, how much did the pirate pay to get his ears pierced?”

“Please stop!” Romano groaned. “It’s bad enough that we have been confined in these Tupperware containers. Must we also listen to your pathetic attempts at humor?”

“Yes! Why couldn’t they play cards on Noah’s ark?”

“Because Noah sat on the deck.”

“No more jokes. Please!” shouted Fontina. “The pain! The pain!”

“What’s yellow and green and eats grass?” I asked. 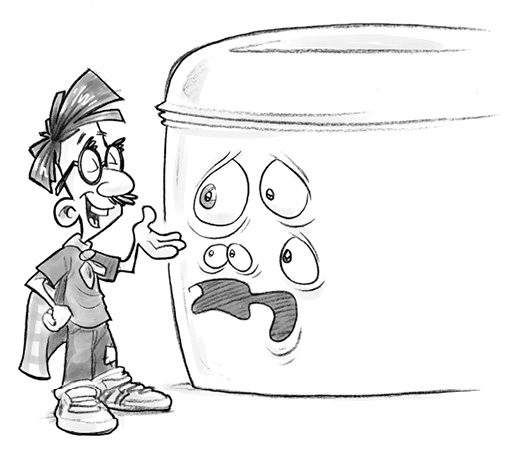 “No,” I informed him. “They only come in yellow and green.”

“Stop the torture!” Romano begged. “Have you no sense of decency! In heaven’s name, please stop this torture!”

“My sense of humor is beginning to
grate
on you, isn’t it?” I sneered. “Get it?
Grate
on you?”

“Not puns!” Mozzarella screamed. “I’m begging you. Anything but puns!”

“Do you know where the first doughnut was made?”

That was it. Suddenly, all four cheeses began to shrivel up. Their faces disappeared into themselves, leaving a big gloppy mess. All was quiet. I went over to Monterey Jack to see if he was still breathing.

We had a brief moment of silence to think about what had happened, and what could have happened if Tupper Camembert had not come along and rescued us.

“The bigger they come, the harder they fall,” Punch grinned. 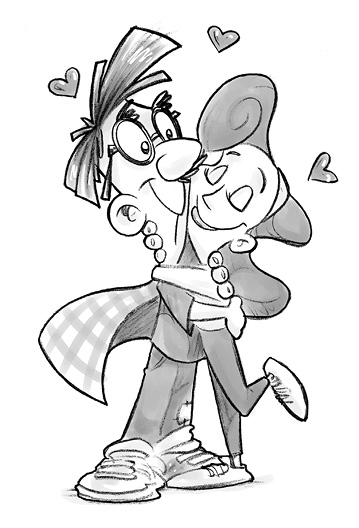 “You live and learn,” added Tupper.

“Some folks just can’t take a joke,” I concluded. “Okay, enough clichés.” I wrapped my cheesy arms around Tupper Camembert and gave her a big hug.