IF YOU MAKE IT TO THE END OF THIS CHAPTER, YOU’LL BE HALFWAY THROUGH THIS STUPID BOOK. THAT’S NOTHING TO BRAG ABOUT, MIND YOU.

The cheese storm that devastated New Jersey stunned and shocked the nation. We watched the horrifying images on TV that evening.

Hundred-year-old trees had been toppled over by tons of melted cheese clinging to their branches. Houses were almost completely covered by enormous mounds of cheese. We saw people standing on their rooftops waving to be rescued. It was very upsetting, especially to Bob Foster, whose hobby was cheese.

It seemed fairly obvious that Monterey Jack, Romano, Fontina, and Mozzarella had something to do with what had happened in New Jersey. The alien cheeses, we realized now, had
not
come to Earth to help America through our cheese shortage. Oh no, that was just a story they made up to mask their true intentions.

We had to face reality. Monterey Jack, Romano, Fontina, and Mozzarella were evil. And they were angry. They clearly had other plans for Earth. We just didn’t know what those plans were yet.

It was quiet around the dinner table that evening. Bob Foster, who liked to serve cheese at just about every meal, prepared a cheese-free dinner. We discussed how lucky we were to be living in Texas, so far away from the gooey cheese fields of New Jersey. Even I wasn’t in the mood to crack any jokes.

“Let me think,” Bob Foster said, rubbing his chin. “Cheese is very high in protein and rich in calcium and vitamin A. ...

“What does that have to do with what happened?”

“I’m just trying to figure out what we can do to stop this insane cheese menace.”

I was just about to eat a spoonful of my SpaghettiOs when I realized that Bob Foster and Punch were staring at me.

“Funny Boy,” Punch urged, “you’ve got to do something!”

“You defeated the airsick alien, didn’t you?” Punch asked.

“Yeah, she was no match for my sense of humor.”

“You defeated those bubble-brained barbers, didn’t you?” Bob Foster asked.

“I just told them jokes,” I explained. “What do you expect me to do, tell jokes to a
cheese
?”

“Yes!” Punch and Bob Foster shouted at the same time.

I didn’t think it would work. Reluctantly, I agreed to use the superpower of my sense of humor to battle the cheeses.

But first we had to find them. When the dinner dishes had been cleared away, Bob Foster tuned his TV in to CNN. The cheesing of New Jersey was the top story, but CNN reported that the cheeses had gone into hiding.

It was the same on ABC, CBS, NBC, TNT, HBO, PBS, and every other network with three initials. None of them had been able to locate the cheeses for an interview. Suddenly, the cheeses weren’t talking.

When the news was over, Bob Foster flipped to the Food Channel for a few minutes before bedtime. They were in the middle of a cooking show with Chef Rick Cotta when suddenly the picture went blank. A moment passed, and then Mozzarella’s ugly “face” filled the screen.

“Listen here, Earthlings! Now our true story can be told. You have angered us! No more Mr. Nice Cheese. Now we are going to make you pay.”

Chef Cotta was now tied to a chair and covered with a giant glop of cheese.

“B-but why are you so angry?” Chef Cotta asked through the cheese that was dripping down his face. “What have we done to you?”

“You eat cheese!” Mozzarella repeated. “And we
are
cheese!” 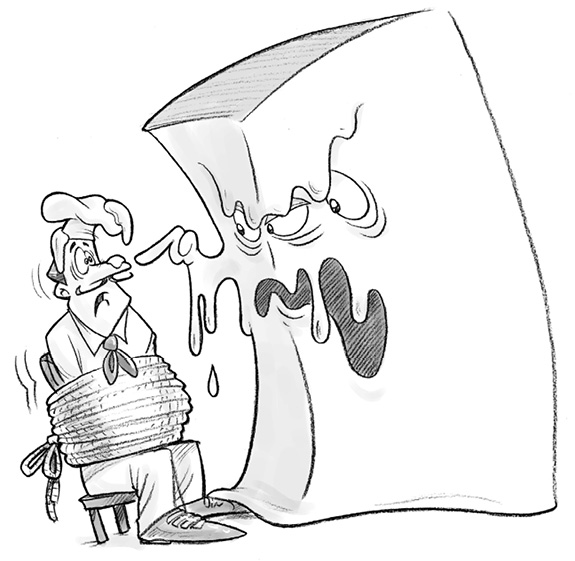 “You mean you are angry because we eat your kind?” the chef asked, disbelieving.

“W-we never realized that cheese had feelings,” the chef admitted.

“How do you think we feel when you grill us, fry us, grate us, melt us, and dribble us on tortilla chips to make nachos?” asked Mozzarella. “It’s disgusting!”

“How would you like it if you came to
our
planet and found we ate human beings?” asked Fontina. “What if we ate grilled human sandwiches? What if we made macaroni-and-human dinners for our children? How would you feel if we spread humans on bagels, put you on crackers, and cooked you on pizzas? What if we munched on Human Doodles?”

“B-b-but ... there are hundreds of different kinds of cheeses,” Chef Cotta asked. “There must be at least one that you will allow us to eat.”

“There is only one kind of cheese that we despise ... American cheese! And now America and the planet Earth must die!”

“It is too late for apologies, Earthling! The cheesing of New Jersey was just a small demonstration of our power. If you do not give us what we want, we will unleash the full fury of our cheese arsenal and you will be extremely sorry you crossed us.”

“What do you want? What are your demands?”

“I’m not going to negotiate with a chef even if you do have your own TV show. Bring us ... the President of the United States of America!”

Congratulations! It’s halftime. You have reached the exact middle point of this book. This would be a good time to stretch your legs, have a snack, use the bathroom, and so on. Enjoy the second half!

Five minutes after the alien cheeses demanded on national TV to speak to the President of the United States, the phone rang in Bob Foster’s kitchen. Bob Foster picked it up.

“Funny Boy, this is Myles Purgallin,” the President barked.

“I need you to meet me in Appleton, Wisconsin, first thing in the morning!”

Wow! A national emergency takes place and the first person the President of the United States calls is
me.
What an honor. It was the most exciting moment of my life. My heart was pounding.

“I’ve got school in the morning,” I told President Purgallin. “How about Saturday?”

“Earth may be destroyed by Saturday!”

This is great, I thought to myself! If Earth were destroyed by Saturday, I wouldn’t ever have to do homework again! I wouldn’t have to deal with teachers or books or pencils or report cards because we’d all be dead and ...

“I’ll be right there,” I told the President.

Quickly, Bob Foster wrote a note to my teacher:

PLEASE EXCUSE FUNNY BOY FROM SCHOOL TODAY. HE HAS TO GO TO WISCONSIN TO PREVENT GIANT CHEESES FROM TAKING OVER EARTH. I WILL PICK UP HIS HOMEWORK TOMORROW, UNLESS OF COURSE THE WORLD IS DESTROYED LATER THIS AFTERNOON.

Bob Foster, Punch, and I rushed to Wisconsin for our meeting with President Purgallin.

“Did you know,” Bob Foster informed us as we boarded the plane, “that the average American eats ten pounds of cheese each year?”

“Will you knock it off?” Punch screeched. “The whole planet is gonna be destroyed, and you’re giving us cheese trivia.”

A long white limousine was waiting for us when we got off the plane. A Secret Service agent hopped out and opened the door for us. The President was waiting inside the car.

“Good to see you again, Funny Kid,” the President said, sticking out his hand.

“Whatever. As you know, Earth is being threatened by some enormous cheeses from outer space. Once again I need your unique gift of humor to repel this threat to our existence.”

“Mr. President,” Bob Foster commented, “speaking of cheese, did you know that in the country of Tibet, yaks supply milk for cheese? Cheese is also made from donkey milk, zebra milk, and camel milk.”

The President looked at Bob Foster for a long moment.

“That’s Bob Foster, sir. Remember? He’s my foster father. He knows a lot about cheese. Maybe he can help us defeat this cheese menace.”

“You’ve got to know what you’re up against, Mr. President,” Bob Foster said. “Who was it who once said, ‘Know thy enemy’?”

“Somebody with bad grammar,” the President grunted.

The President looked like he was in a bad mood. It must be difficult running the country, it occurred to me. Every day you have to deal with the economy, Congress, conflicts with other nations, domestic problems. He certainly had enough problems to deal with. And now, enormous cheeses.

The limo pulled onto the highway, WELCOME TO WISCONSIN, a billboard read, AMERICA’S DAIRYLAND.

“I hate cheese,” the President muttered.

It wasn’t long before we had reached Appleton. The limo pulled up to a large barn, which the cheeses were apparently using as their headquarters for world domination.

“Let me do the talking,” the President told me. “I’ll find out what they’re up to. Then we’ll have you use your super power of humor.”

The barn door opened and we walked inside. And there they were. Four enormous cheeses, dripping and oozing. They looked even bigger than they did on TV. And they were certainly smellier. The odor was overpowering. It was disgusting. I used my cape to cover my nose.

“So this is the President of the United States,” Romano snickered, sliding toward us.

“The most powerful man in the world,” drawled Mozzarella.

“Is he the best Earth can offer?” Fontina snorted.

“He’s got some friends with him, I see,” added Mozzarella. 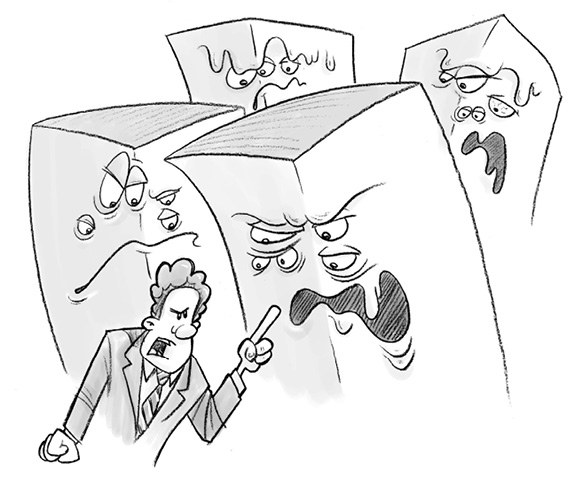 “I don’t have time for small talk,” the President snapped. “Which one of you is the big cheese?”

“I am,” all four cheeses replied.

The President boldly walked up to the cheeses.

“I understand you are upset because we Earthlings eat cheese,” he stated. “Do you plan to take away all our cheese to prevent us from eating you again?”