I had never been so depressed in my life. The world was coming to an end, and I didn’t have anyone to share it with.

Sadly, I trudged into the East Room of the White House, where the President was preparing to hold another press conference. He didn’t look so good himself. I took a seat in the back, away from Bob Foster. Away from Punch. Away from everybody. I just wanted to be alone.

“My fellow Americans,” the President began. “By now, some of our great United States are completely submerged under a thick layer of pungent cheese. The rest of the country, and the world, will soon be in the same situation. My advisers and I have been up all night discussing what we should do. At this point, our only option left is to use nuclear weapons against the cheese. But I can’t do that. It would mean dropping bombs on the United States itself which would kill every man, woman, and child. So this is what I have decided to do. ...

The President took a deep breath and wiped a tear from his eye before continuing.

“Effective immediately, the manufacture, distribution, and sale of all cheese is prohibited.”

A gasp was heard throughout the room.

“The eating of cheese is punishable by death. The Smithsonian Institution will be turned into the National Museum of Cheese. At this point, I would like everyone to please rise and put your right hand over your heart.” 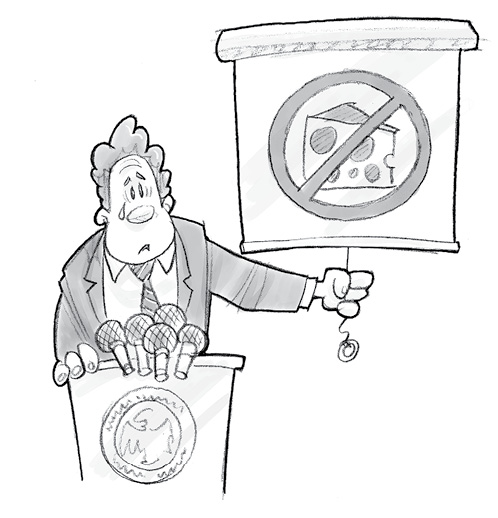 “I pledge allegiance,” he recited, “to the cheese—”

All heads turned around to see who had interrupted the President.

It was my dog, Punch.

“You can’t give in yet, Mr. President!” Punch yelped. “We still have one secret weapon at our disposal.”

“Who said that?” the President asked, peering into all the faces.

“And what secret weapon do you have in mind?”

“Funny Boy, sir!” Punch shouted excitedly. “He can beat those cheeses. I just know he can!”

Everyone in the room turned around and stared at me. I gave a little embarrassed wave.

“Funny Boy?” The President snorted. “He failed miserably the last time I gave him a chance. What makes you think he can defeat the cheeses now?”

“I’ll tell you why, sir,” Punch explained, standing up on her hind legs. “There are only twenty pages left in this book, so Funny Boy
has
to defeat the aliens, and quickly!”

“What book?” the President shouted.

“The book we’re all in,” explained Punch. “Remember I told you we are all fictional characters?”

The President conferred with his top advisers, who apparently confirmed for him that they were all fictional characters in a children’s book.

“How many pages did you say are left in the book?” the President asked.

All eyes were on me as I walked slowly up the aisle and climbed up to the podium. I felt so nervous that I was shaking. 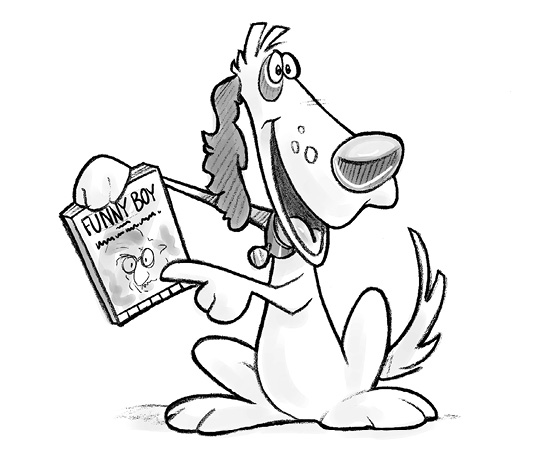 “Funny Boy,” the President sighed. “I want to apologize for calling you a loser and a dope.”

“I’m sorry I said you weren’t the least bit funny.”

“I deeply regret saying you were a dumb kid, an idiot, a moron with the brains of a pile of mud.”

“Oh, I guess I was just thinking it. But I take it all back now. Funny Boy, you are our last and only hope. Our nation turns to you in its hour of need. Will you help us?” 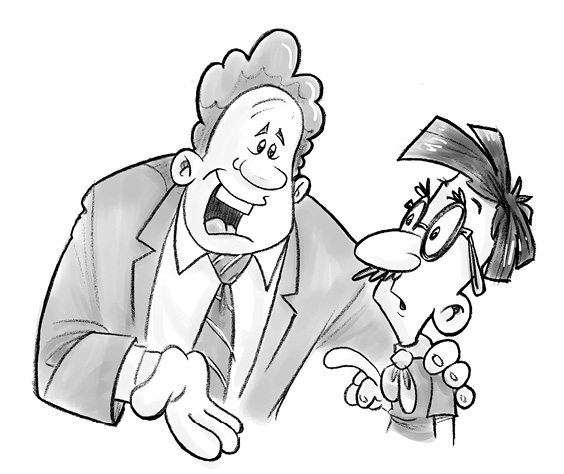 SUGGESTION TO READER: As you read the following, have a friend hum “America the Beautiful” in the background.

As I stood there on the podium in the White House, I gazed out at all the pleading faces before me. I thought about all the things I had come to love about my adopted planet. Things I had come to take for granted. Things like double coupons at the supermarket. And intermittent windshield wipers. Those little yellow sticky notes that come in so handy.

I decided that it was up to me to make the world safe. Safe for Personal Pan Pizzas and Blow Pops and Groundhog Day. Safe for drive-through windows at fast-food restaurants. Safe for Ritz Bits and synchronized swimming. Safe for people who call you on the phone at dinnertime trying to sell you things. I felt tears welling up in my eyes.

NOTE TO READER: If you are reading this book in school, begin making noises like a chicken at this time. Maybe your teacher will think you are crazy and send you home for the day.

READ THIS CHAPTER! THIS IS WHEN IT GETS REALLY EXCITING AND IT LOOKS LIKE FUNNY BOY IS GOING TO DIE!

I, Funny Boy, was on my way for a final confrontation with the chitchatting cheeses from Chattanooga.

United States Government planes, helicopters, and cars rushed Bob Foster, Punch, and me to the Wisconsin barn where the cheeses were still headquartered. I had thrown away my copy of
Milton Berle’s Private Joke File
and surfed the Internet looking for jokes and riddles. Armed with a full arsenal, we marched through the doors. We were immediately hit with a powerfully foul odor.

“Aha!” Mozzarella proclaimed. “I see our young friend Dummy Boy is here. We’ve been expecting you.”

“That’s
Funny
Boy,” I announced, holding my nose. “I have been sent by the President of the United States to defend the planet Earth, including Antarctica, where nobody in their right mind would even want to go. Who’s the big cheese around here?”

“I am,” all the cheeses replied. 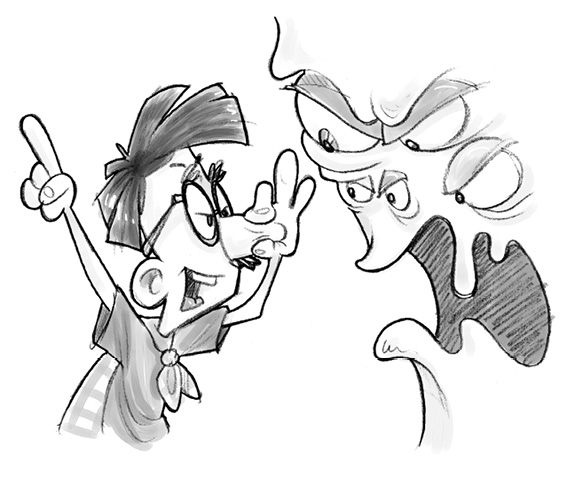 “You already used that joke once in this book,” Punch whispered.

“I know,” I replied. “But nobody laughed the first time, so I thought I would try again.”

“Come to me, Funny Boy,” Monterey Jack ordered. “I want to tell you something before we kill you.”

Slowly, I approached the cheese.

“I’m not going to beat around the bush,” Monterey Jack warned ominously. “You’re getting too big for your britches, Funny Boy. This time you bit off more than you can chew. We are armed to the teeth. Actions speak louder than words. It is time for you to face the music. You may think you are funny, but we will have the last laugh. And that’s the bottom line.”

“Do you always have to talk in clichés?” I asked.

“Didn’t you ever hear the cliché ‘live and let live’?”

“Look, I’ll make a deal with you. Surrender now and we’ll build a cheese-themed amusement park in Orlando, Florida.”

“Hahahahaha!” Mozzarella cackled. “In twenty-four hours, your entire planet will be our
personal
amusement park!”

“Hmmm. Good point,” I admitted. “Okay, then you asked for it. The time has come for me to tell jokes that are so funny you will die laughing.”

Suddenly, a long, low buzzing sound was heard. It lasted about five seconds.

“What was that?” Bob Foster asked.

“We have just turned on our invisible joke-deflector shield,” Fontina snickered. “It is totally impenetrable to humor. Your jokes will just bounce off harmlessly. Hahahaha!” 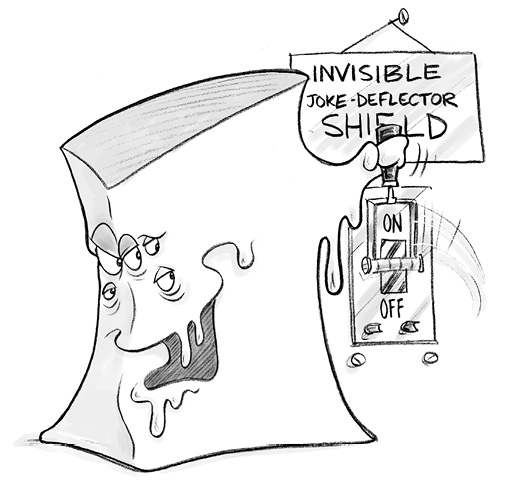 “Go ahead and see for yourself,” Mozzarella challenged. “Try a joke.”

“Okay,” I answered. “Where does a one-armed man do his shopping?”

“In a secondhand store.”

The cheeses had no reaction at all.

“We didn’t even hear it,” Fontina hissed. “The joke bounced right off the shield.”

“Try another one,” Bob Foster suggested.

“Okay. Why were the little strawberries so upset?” I asked.

“Their parents were in a jam.”

“Drat!” I complained. “The joke-deflector shield is too strong. My jokes aren’t going over.”