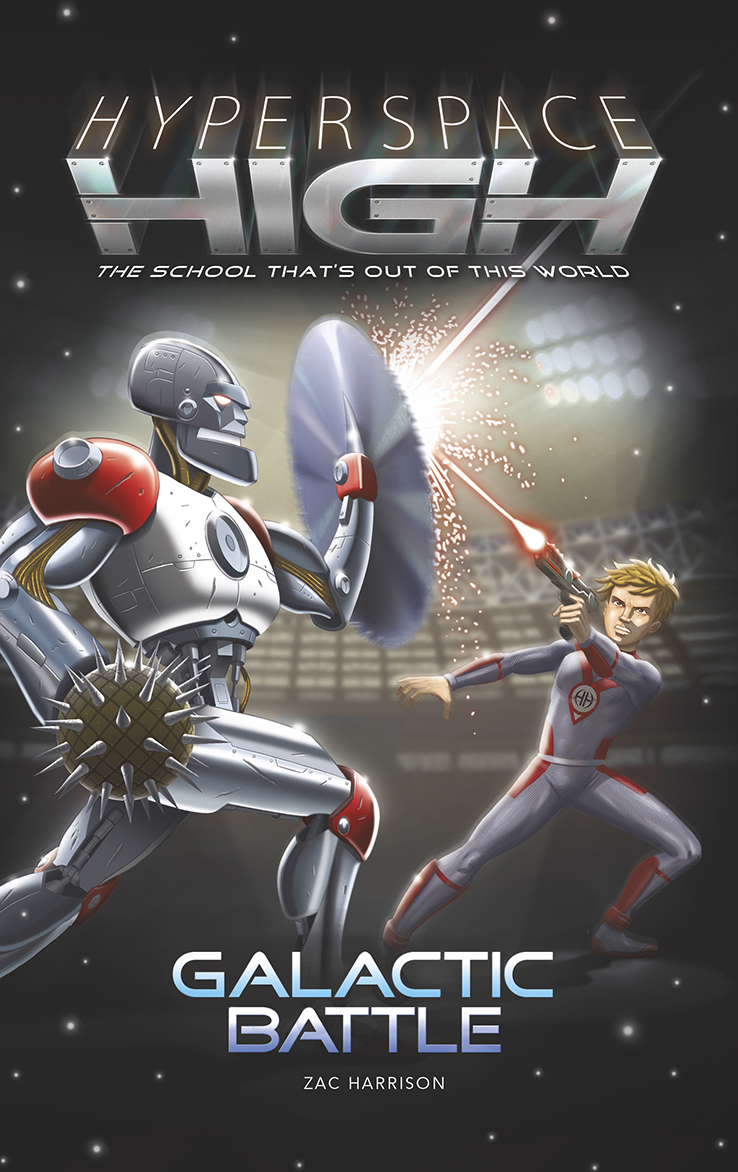 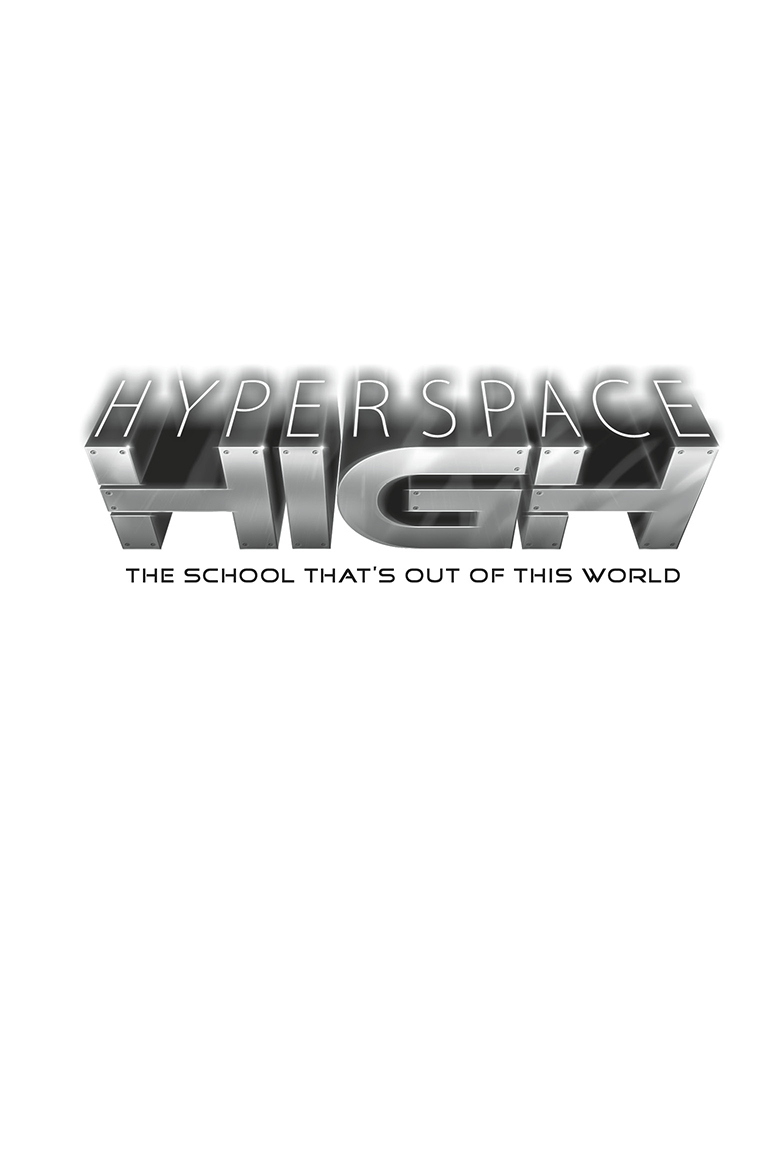 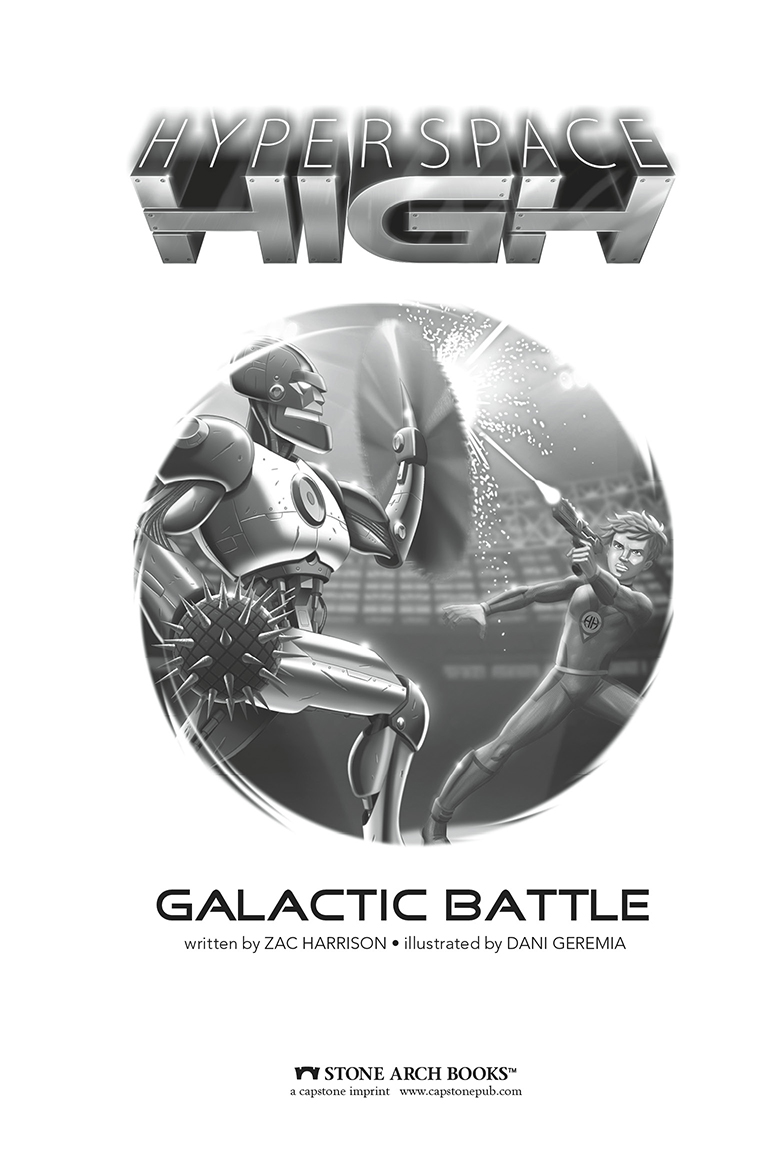 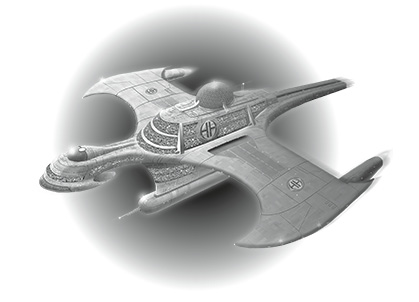 John Riley's shared dorm was like a plush hotel room, with luxurious sofas and huge enclosed beds. And the floor-to-ceiling window had a view that no hotel on Earth could have matched. But as John gazed out at black outer space twinkling with stars, he couldn't help wishing instead for a view of trees and grass. He longed to see a clear blue sky with fluffy white clouds. It had been several weeks since he'd left Earth, and he was feeling a bit homesick for his world. John let out a deep sigh.

“I know exactly how you feel,” Kaal said sympathetically. “I can't wait to see my folks at the Space Spectaâ” Kaal cut himself off, before continuing awkwardly. “Sorry, John. I keep forgetting that your parents can't come.”

A gloomy silence descended over their room. But it was soon broken by the sound of an incoming video call. Suddenly, three demonic, green-skinned figures filled one of the two video screens on the desk. They leaned in close, their wings rustling behind them, and grinned, revealing white, sharklike teeth.

Kaal, who looked exactly like the aliens on the screen, grinned back at them and waved happily. “Hi, Mom! Hi, Dad! It's so good to see you! How's little Varka? Hi, Kulvi. Hey, you had your teeth sharpened! Nice!”

“You're looking good, son,” rumbled the largest alien, who John guessed was Kaal's father. “Varka is sleeping, thank goodness. She finally had her first skin-shedding â Ah, I didn't realize your roommate was there, too! Hello, John.”

John, who was sprawled on one of the sofas, looked up from his holocomic. “Wide skies, Mr. Tartaru,” he said, giving the traditional Derrilian greeting Kaal had taught him. Even though Kaal and his family were speaking their native language, John could understand every word they were saying, thanks to Hyperspace High's computer system, which translated everything into the language of each individual listener.

“And good flight to you, too, young man!” Kaal's father responded, clearly impressed.

“What excellent manners your friend has,” said Kaal's mother.

“Wonder where he learned them?” Kulvi said, with warmth and wickedness in her voice. “Surely not from my little brother Kaal. You want to watch out for him, John; he's a twerp. Hey, Kaal. Remember when you put the scutterliches in my bed?”

“They needed somewhere warm to hatch or they'd have died!” Kaal protested.

John tried not to laugh. He'd heard Kaal's side of this story a hundred times.

“Now, Kaal,” his mother said, “this chitchat is very pleasant, but we must discuss our visit to Hyperspace High. It's in three days.”

“I know,” Kaal said, fidgeting with excitement. “I can't wait!”

“We're looking forward to it, too, dear one. But there are arrangements to make! Did you reserve a docking space for the family starhopper?” Kaal's mother asked. “We won't be the only family coming to visit! And where are we going to sit during the Space Spectacular? You can't leave these things to the last minute, you know.”

John grinned and retreated behind his holocomic, leaving Kaal to chat excitedly to his family.

It was funny how moms and dads were much the same all over the galaxy, if Kaal's were anything to go by. His own mother would have been just as fussy about the arrangements.

“Hey, do you know if the Tarz family is coming?” Kulvi said. “I haven't seen Brannicus Tarz in years! He's a bigwig on the Galactic Council now.”

“Of course they are!” Kaal said. “This is the Space Spectacular we're talking about. Everyone's family is coming!” Then he stopped in his tracks. “Um. Almost everyone's, I mean. Not all the families can make it, of course.”

“Of course,” his father echoed. There was another awkward silence.

John winced. Neither Kaal nor his family had looked in John's direction, but he knew they were talking about him. He was the only student on Hyperspace High whose parents would never â could never â visit the school.

It wasn't just the distance. Unlike all the other parents, John's mom and dad didn't even know he was here at Hyperspace High. They thought he was at a boarding school back on Earth.

All those weeks ago, John had accidentally climbed aboard a space shuttle that he'd thought was the bus taking him to his new boarding school. Instead, he was taken far away into the galaxy, to the best space school in the universe: Hyperspace High.

John, the first Earthling to ever board the school, had almost been expelled seconds after arriving â here, that meant being thrown out of an airlock! It was only thanks to the intervention of Lorem, the school's headmaster, that John had been allowed to stay on as a student.

So far, John had managed to keep his parents thinking that he was at the Earth boarding school. There had been a few narrow escapes, though, like the time he'd had to pretend an alien in his room was a science project. That had been a close call . . .

“Do you two even know what you're doing for the Spectacular?” Kulvi asked.

“We haven't even been assigned to our groups yet,” Kaal said. “That's happening at twelve sharp today, in the Center. I might get Galactic Battle, Plasma Sculpting, Zero-G Acrobatics â even Star Dance! Can you imagine me dancing?”

“I was a Star Dancer in my final year, remember?” Kulvi said, laughing. “I'll never forget it. We were like a herd of gograflomps in rehearsal! Nearly destroyed the stage!”

“Hey, if we could pull it off, you can. It all came together in the end, thank goodness. We rocked that Spectacular.”

“I'm sure Kaal will make us proud, whatever activity he's assigned to,” Kaal's dad said.

“I'll do my best, Father,” Kaal said gravely, as if his life depended on it.

John rolled his eyes behind his comic. His huge Derrilian friend was fun to be around, but he could be very serious sometimes, especially where his family was concerned. Although John knew he'd be just as eager to impress his own parents if they were coming.

John wondered what activity he'd be assigned to. Honestly, he wasn't even sure what a Space Spectacular was. A sort of cross between a school-wide open house and a talent show, he guessed, where all the students showed off the skills they'd learned, while the families looked on. By the sound of it, it was a pretty big deal. Families would soon be arriving at Hyperspace High from worlds many light-years away.

Not from Earth, though.

John sighed, put down the comic, and squeezed his eyes shut to keep himself from crying. It was hard to pretend that everything was okay while listening to Kaal and his family make plans.

Kaal was still talking excitedly. “. . . and when the Spectacular's finished, can we go out for a meal at Ska's CafÃ©? They do the best Vortex lumpgriddles anywhere . . .”

John thought back to the last time he'd taken part in a show in front of parents. He'd been the lead in the school production of
Oliver,
and he'd sung his heart out. His mom had been so happy, she'd cried. “I'd do anything for youuuu,” he'd sung to her in the car on the way home, over and over, until she was laughing.

What was that cold, empty, sucking feeling behind his ribs, like a black hole draining away his good mood? Oh, yeah. Homesickness. Just being away from home was one thing, but being millions and millions of miles away was something else.

Why wasn't there some way for his parents to come, too? It wasn't fair. This enormous space-faring school could travel faster than light, but even if the ship made a detour to visit Earth, he still couldn't bring them on board. Humans hadn't yet made official contact with other galactic beings yet, and that was how it had to stay for now. Rules were rules, and John was very lucky to be the exception.

The dorm door opened, and in bounced Emmie Tarz, John's golden-skinned, pointy-eared, Sillaran friend. “Morning, boys! Have I got some news for â Oh, hi, Mr. and Mrs. Tartaru! Hi, Kulvi! Sorry, I didn't know Kaal was on the vidphone!”

Emmie wasn't fooled for a second. In a series of graceful leaps, she crossed the room to the sofa where John lay, her silver hair trailing behind her. “Just the human being I wanted to see. Come on, mister. You're going for a ride.”

Before John could protest, she had grabbed his arm and pulled him out of the dorm. “See you later, Kaal! Bye, everyone!”

“What's this about a ride?” John blustered, as Emmie led him down the corridor.

“Thought it might cheer you up,” Emmie said, grinning.

“I didn't say anything about being miserable!”

John had to smile. Some things he just couldn't hide â not from Emmie. “So what are we riding?”

“Ah! Well, Sergeant Jegger asked me if I wanted to do a special assignment for extra credit.”

“You agreed to do extra schoolwork?” John was surprised by this, as Emmie struggled with most academic subjects.

“I know, right? But this is Space Flight we're talking about. The best class of all, by light-years.”