Read Genocide of One: A Thriller Online

Genocide of One: A Thriller 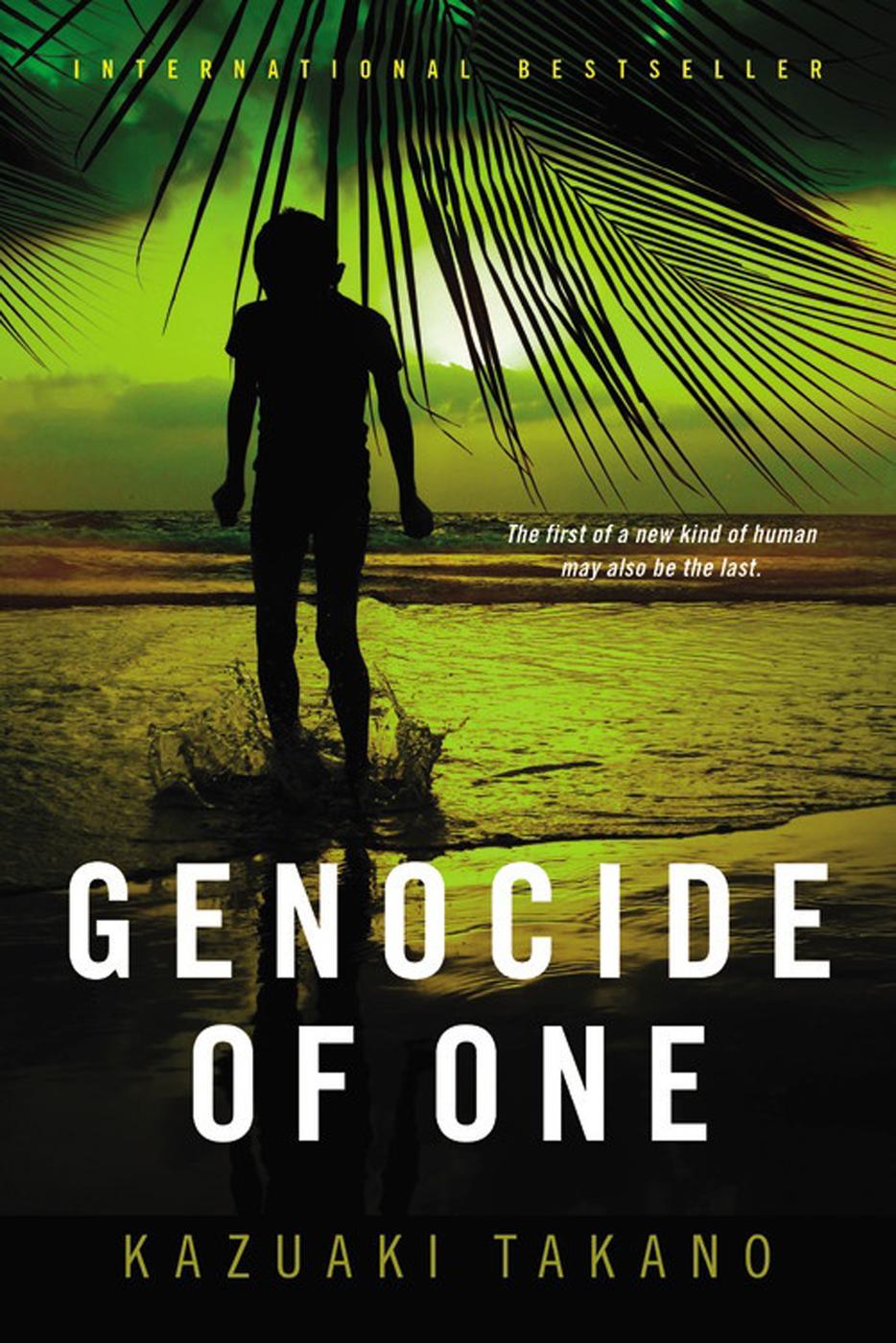 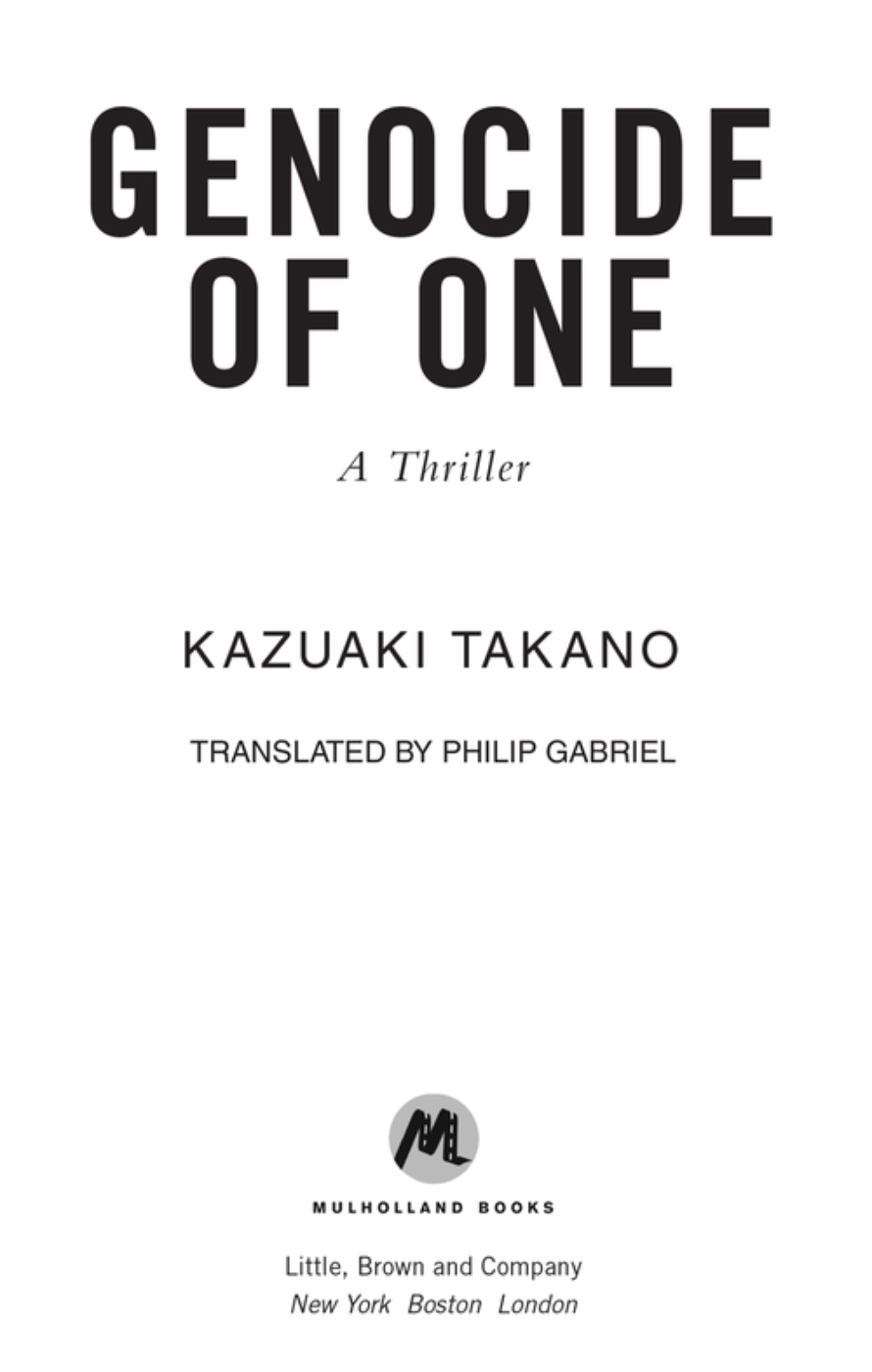 This mansion never
felt like home, no matter how many years he lived in it. He never slept well here;
his sleep was shallow at best, and it wasn’t just because he was getting older. Today,
after another restless night, Gregory S. Burns awoke to the ringing of his usual morning
wake-up call.

He exchanged a few words with the operator but stayed in bed, enjoying a precious
few minutes of reprieve. Eventually—reluctantly—he got up, stretched his arms high
above his head, and yawned deeply. He stepped into the shower, keeping the water cool
to help clear his head, then changed into the suit his wife had laid out for him.

In the dining room his wife and two daughters had started breakfast. His daughters,
just up and in a bad mood, were running through a litany of complaints about their
school. He half listened and made the appropriate noises so they knew he wasn’t totally
ignoring them. Fortunately, his wife no longer had sharp words for him when he neglected
his family, a small concession he’d won after a long-running battle.

His home and workplace were connected: all he had to do was step into the hall, and
he was in a public space. He picked up the forty-pound briefcase at his feet and stepped
out of the room. As the ominous nickname of the case—the nuclear football—implied,
it contained within it the trigger that could destroy mankind, the device that Burns
would need if he were to order a nuclear attack.

Gibson took the briefcase from Burns and snapped the metal cuff around his own wrist,
chaining the case to himself. Burns and Gibson proceeded downstairs, where they were
joined by Secret Service agents, and together they headed for the West Wing. On the
way a National Security Agency official met them and handed Burns a small plastic
card, code-named Biscuit. The card was coded with a series of random numbers that
made up that day’s nuclear launch code. Inputting these numbers into the keyboard
inside the nuclear football would authenticate any launch order. Burns put the card
in his wallet, then put the wallet in the inside pocket of his jacket.

The Oval Office looked out onto the sunny Rose Garden. Burns waited as his daily briefing
staff assembled. As they were cleared to enter they came in—the vice president, the
White House chief of staff, the national security adviser, the director of national
intelligence, and the director of the CIA.

They settled down onto the sofas, exchanging greetings, and Burns noticed one more
person in the room than usual, a middle-aged man seated farthest from him—Dr. Melvin
Gardner, his science and technology adviser. Gardner was hunched over, clearly ill
at ease. With his genial, intelligent eyes below his silver hair and his low-key,
subdued appearance, he looked ill suited to be joining a group that included the most
powerful man on the planet.

With Gardner’s smile the atmosphere relaxed ever so slightly. Of all the men in the
room, only Gardner had this quality, this air, of being harmless. Innocent, even.

“Mr. Watkins asked me to sit in,” Gardner explained.

Burns glanced at Charles Watkins, his director of national intelligence.

Burns nodded, careful not to let his disapproval show. If Watkins wanted Gardner to
sit in on the briefing, he should have gotten his permission beforehand. The post
of director of national intelligence was new, and Watkins was newly appointed, but
Burns was already irritated by the way the man was constantly taking authority into
his own hands.

“Sir, the daily intelligence briefing,” Watkins said, pulling some papers out of a
leather binder. This was a summary, prepared by the intelligence community, detailing
activities over the last twenty-four hours.

The first two items dealt with the wars Burns had begun in the Middle East. The wars
in Iraq and Afghanistan weren’t going well. Security in Iraq was deteriorating, while
in Afghanistan hidden terrorist cells were still at large, and US casualties were
mounting. The number of US war dead and Burns’s rising unpopularity were both trending
upward. Burns now regretted having swallowed whole his defense secretary’s advice,
which put only a fifth of the number of troops on the ground that the army chief of
staff had requested. One hundred thousand US troops had been enough to overthrow the
dictator and take over this small country, but they were unequal to the task of restoring
order now that they were an occupation force.

The third item was an even more disturbing report. The CIA suspected that there were
double agents at work among their paramilitary personnel in the Middle East.

The director of the CIA, Robert Holland, asked for permission to speak. “We’re seeing
a type of intelligence leak we’ve never seen before. If our suspicions are correct,
there is one individual who is leaking intelligence, not to an enemy country but to
a human rights organization.”

Burns looked sullen as he listened to the details. “Let’s get the counsel to the president
involved before we discuss this again.”

The fourth item concerned a leader of one of the coalition countries who was suffering
from depression and unable to carry out his duties. The report stated that it was
only a matter of time before there was a change in leadership, but that this shouldn’t
affect the country’s friendly relations with the United States.

They turned the page to the next two items on the report, and as Burns listened to
the explanations they arrived at the final page and the following heading:

The Possibility of the Extinction of the Human Race: A New Life Form Appears in Africa

Burns looked up from his binder. “What is this? A Hollywood screenplay?”

Only the chief of staff smiled at the president’s little joke. The others were silent,
unable to hide their bewilderment. Burns fixed his gaze on the director of national
intelligence. Watkins held his gaze without flinching. “It’s a report from the NSA,”
he said.

Burns suddenly recalled an earlier incident in which a deadly virus outbreak had occurred
in Reston, a DC suburb. The US Army Medical Research Institute of Infectious Diseases
and the Centers for Disease Control had worked together to contain the deadly virus,
a form of Ebola. This incident must be something similar.

A new type of life-form has appeared in the tropical rain forests of the Democratic
Republic of the Congo. If it spreads, this life-form will pose a threat to the United
States and may lead to the extinction of all mankind. This type of situation has already
been mentioned in the Heisman Report from the Schneider Institute, which was submitted
in 1975.…

Burns carefully read through the information and then leaned back on the sofa. It
was clear now why the science and technology adviser had been summoned to the meeting.

“Are you sure they didn’t mistake Islamic extremists for this new life-form?”

Watkins remained matter-of-fact. “This is reliable intel. We’ve had specialists analyze
it, and they believe—”

“Enough,” Burns said, interrupting. He found the report offensive. Not just the contents
but its very existence, which he couldn’t stomach. “I’d like to hear what Dr. Gardner
has to say.”

All eyes turned to the hesitant-looking older scientist. With the president in such
a foul mood, Gardner found himself stammering. “It’s been predicted since—since the
second half of the twentieth century that—something like this might happen. The Heisman
Report mentioned in your intelligence summary was written in response to discussion
about this possibility.”

Burns was surprised at the seriousness of his reply. The scientist’s thoughts on this
seemed to exceed anything a layman could fathom. Still, Burns couldn’t get rid of
a deep sense of unease. A new life-form that leads mankind to extinction? Who in his
right mind could believe that?

“And you find this intelligence reliable?” Burns asked him.

“I have a copy of the Heisman Report right here,” Watkins said, taking out a new document
from his folder. “I’ve marked the relevant section. Section five.”

Burns read over this report from a quarter of a century earlier. Gardner waited for
him to finish, then spoke. “The intelligence we have now is indirect. Other than the
person sending the report, no one else has confirmed this new life-form. I think it
would be worth sending personnel from the United States to check out what’s actually
going on.”

“At this point it should be easy to take care of,” Watkins added. “And it wouldn’t
cost much. A few million dollars should be sufficient. But we’d have to make sure
it’s kept entirely confidential.”

“Do you have a plan in mind?” Burns asked.

“I’ve ordered the Schneider Institute to put together an action plan. I should have
options on my desk by the weekend.”

Burns thought it over. He couldn’t see a downside. For the president of a nation at
war, it was best to handle any extraneous problems immediately. And this whole issue
was something he found particularly loathsome. “All right. Let me see the options
as soon as you get them.”

The morning meeting was concluded, but these same issues were raised again at the
nine o’clock cabinet meeting. There the secretary of defense, Geoffrey Lattimer, summarized
the final issue—
a biological problem
—after a quick, two-minute discussion. “This is the kind of stupid thing that should
be left up to the Schneider Institute,” he said dismissively.

At the president’s urging they bowed their heads in prayer to close the meeting.

A CIA staffer came into the Cabinet Room after the meeting broke up and collected
all the copies of the president’s daily briefing. All briefing materials were top
secret and were archived at Langley. Only ten people in the entire world knew what
had been discussed at this meeting in the late summer of 2004.