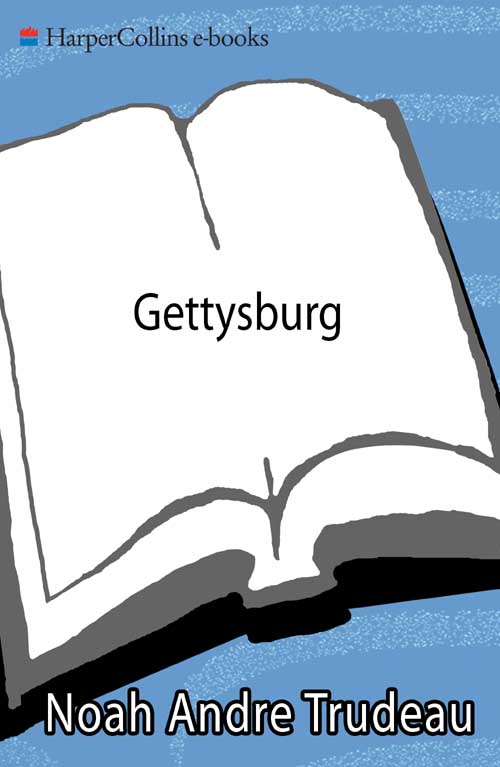 A Testing Of Courage

When I was younger I could remember anything, whether it happened or not. But as I grew older, it got so I only remembered the latter.

TWO.
“… we were taking a lot of chances”

FIVE.
“I hope … to end the war if Providence favors us”

SIX.
“… I can throw Genl Hooker’s army across the Potomac”

SEVEN.
“We were all scared”

NINE.
“It was my firm determination … to give battle”

TEN.
“I am going straight at them”

ELEVEN.
“It begins to look as though we will have a battle soon”

FIFTEEN.
“I thought my men were invincible”

SIXTEEN.
Pursuit to a Personal Crossroads

T
here is a hallowed tradition in the Gettysburg battle-book industry of beginning each new work by apologizing for adding to the congestion of so many previous studies on the subject, and explaining why the latest effort is justified. I have no apologies to offer, and only the briefest of explanations: a fresh look needs to be taken at this most emblematic military campaign and combat of the Civil War. The last overall treatment of length and substance was Edwin B. Coddington’s justly lauded
The Gettysburg Campaign: A Study in Command
, which first appeared in 1968. Since then, writing about the battle has been constant, so much so that several small publishing houses specialize in it as a genre. A new breed of Gettysburg scholar has emerged: the microspecialist. The event has been broken down into every conceivable subtopic, from the experiences of individual regiments, soldiers, or combat arms, to medical and civilian histories, to second-by-second accounts of its individual days (or even portions of individual days). The sum total is that a powerful refinement of Gettysburg’s story has emerged. Many cherished tales were found to be fables, while other, long-overlooked acts of heroism and courage were revealed. This book synthesizes those discoveries and my own into a comprehensive narrative of one of the most unforgettable sagas in United States history. It is time.

A
basic understanding of Civil War military organization, tactics, and weapons is assumed in the text that follows, so a brief primer may not be out of place here. For the most part, the military forces of each side were organized according to the same hierarchy, by corps, divisions, brigades, regiments, and companies (in descending order of size). It was common in the Confederate army to refer to units above the regimental level by the names of their commanders (present or past); I have followed that practice and capitalized accordingly (e.g., Longstreet’s Corps, Rodes’ Division, Archer’s Brigade). Union forces, in contrast, tended to follow a numbering system (e.g., Third Corps, First Division, Second Brigade), so when I refer to those units with the names of their commanders I have
not
capitalized the result (e.g., Wadsworth’s division, Vincent’s brigade). A few Federal units achieved an identity that transcended the military numerology, most notably Iron Brigade and the Irish Brigade. With a few exceptions, regiments are always referred to by their number and state: the 154th New York, for instance, or the 26th North Carolina.

The two essential unit formations, at least so far as this book is concerned, are column and line. A column was a marching formation; with three or four men abreast, it packed a regiment into as compact a space as was practicable for rapid movement along a road or across open ground. Once engaged in combat, columns transformed into lines of battle—usually at least two and sometimes three, with the third standing by as a reserve. These lines, each containing perhaps three hundred men or more, were jointed by companies, allowing one section of the line to face one way while another portion faced in a different direction. The ends of a line were its flanks; the process of bending back a segment of the line so that the men stood at an angle to their original orientation was referred to as refusing the flank.

The standard combat formation relied on a massing of rifles and the resultant firepower for its effect. Often positioned in advance of the compact lines of battle were more widely dispersed and irregular detachments known as skirmish lines. Their purpose was to harry the enemy, break up advancing formations, and provide the main body with ample warning when trouble was coming. Skirmish units could take many forms, from small cells of three or four men to widely strung lines consisting of individual soldiers posted several yards apart.

Most of the weapons used at Gettysburg were muzzle loaders—that is, their powder and shot were loaded through the front of the barrel. Also on the field were some breech-loading weapons, whose munitions were inserted into the barrel from the side, top, or rear. Cannon fired three basic types of ordnance: solid shot, case shot, and canister. Solid shot, the traditional cannon ball, was generally reserved for long-distance counterbattery shooting. Case shot was a fuzed shell that exploded into deadly particles either on contact or after a timed fuse ignited the charge. Canister consisted of a coffee-can-like casing holding golf-ball-sized metal spheres. The casing disintegrated upon firing, scattering the spheres like shotgun pellets. Canister was an antipersonnel munition, typically saved for fairly close-in work.

Directional references in the text are always from the point of view of the side under discussion. When it comes to spelling from original sources, especially manuscripts, I have used a variable standard in an effort to eliminate the qualifier
sic
from the text. Where I feel a particular spelling conveys a vivid sense of character, I have preserved the original; otherwise I have engaged in some judicious editorial cleaning-up of manuscript passages.

July 1: Entering the Herbst Woods/Action North of the Railroad Cut

July 1: Action in the Herbst Woods

July 1: Fight for the Railroad Cut

Reno Gabrini: A Family Affair by Mallory Monroe
Coney by Amram Ducovny
Star over Bethlehem by Agatha Christie
Heart of a Dove by Abbie Williams
Trust in Me by Dee Tenorio
Wicked Fix by Sarah Graves
The Legacy by Craig Lawrence
Breaking Unhealthy Soul Ties: Do Your Relationships Produce Bondage or Joy? by Banks, Bill, Banks, Susan
Seas of Ernathe by Jeffrey A. Carver
The Heavenly Host (Demons of Astlan Book 2) by J. Langland
Our partner