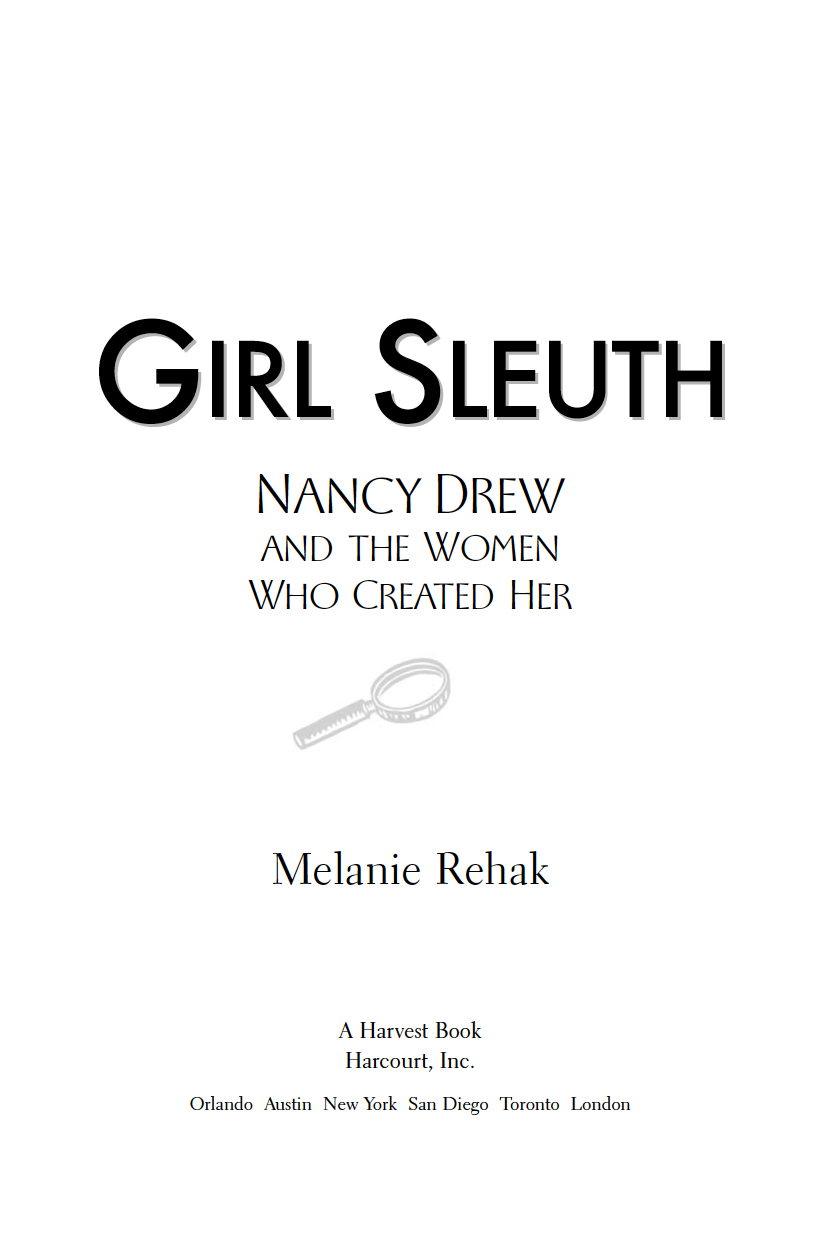 An Unfortunate Break; or, The Cleveland Writer Comes into Her Own

The Kids Are Hep

Nancy in the Age of Aquarius

Will the Real Carolyn Keene Please Stand Up?

NANCY DREW MYSTERY SERIESÂ® NANCY DREW and all related characters and images from the frontispieces of
The Clue in the Diary, Mystery at the Moss Covered Mansion,
and
Mystery at the Ski Jump,
the 1973, 1969, 1946 book covers from
The Mystery of the Tolling Bell,
and photograph of Harriet S. Adams are Â© and registered trademarks of Simon & Schuster, Inc. All rights reserved. The classic hardcover editions of these Nancy Drew titles are available from Grosset & Dunlap, an imprint of Penguin Books for Young Readers.

G
RAB YOUR MAGNIFYING
glass, because this is a mystery story. At first glance, its star is a girl detective, a legendary foiler of plots and teen avatar of justice. But, really, the mystery lies beyond the realm of her adventures. It's in the story of how she came to be an American icon and why she's stayed one for decades. It's in the lives of the man who dreamed her up and the women who shepherded her into existence and molded her character. Most of all, it's in the long-buried secret behind the identity of Carolyn Keene, the woman who has kept generations of little girls sneaking a flashlight under the covers after bedtime to finish reading just one more chapter of a Nancy Drew Mystery Story.

For some of us, who had our flashlights summarily removed by mothers and fathers in the know, more creative methods were required. At the age of about ten, I used to pretend I was afraid of the dark so that my parents would leave the light on in the hallway outside my bedroom, then I would flip around in my bed and hang over the bottom edge. Straining to hold my book at such an angle that it would catch the sliver of light from the doorway, I would keep going until the lines literally blurred in front of my eyes. My favorite title, which I must have read and reread dozens of times between the ages of eight and twelve, was
The Mystery of the Tolling Bell.
As always, it featured Nancyâ“eighteen and attractive .Â .Â . unusually sensible, clever, and talented,” with her trademark red-gold hair, which often blew in the wind to appealing effect; tomboy George, “athletic looking, with short dark hair”; and George's cousin Bess, giggly and slightly plump, as she was in every book. The story concerned a cliff-side sea cavern haunted by a ghost who was said to ring a warning bell just before the tide rushed in and turned the rocky chamber into a watery grave for anyone caught there. It was crammed with Nancy's do-gooder sense of responsibility, loads of French phrases (primarily concerning a subplot involving a phony cosmetics company called Mon Coeur) that Nancy had no trouble translating for her pals, and fascinating information on the history and making of bells. There were also the usual twists and turns, painted with none-too-subtle strokes. Nancy was knocked unconsciousâa feature of many books in the seriesâand there were secret passageways and an evil man named Grumper. At one point, Nancy and George tie up a thief and sit on his chest to make sure he doesn't escape. The teen sleuth, as always, figures it all out in the end, including how the mysterious bell is being rung by the ocean tides and who's behind the phony cosmetics. She pronounces her solution in a speech studded with exclamation points: “âJust as I thought!' Nancy told herself as she hugged the damp wall to keep from being seen. âThis is the interior of the tolling-bell cave! And the ghost can only be one personâGrumper!'”

As was often the case, this revelation was not sufficient to put Nancy out of danger. Instead, it led immediately to her near death in the spooky cave. She was saved, in part, by her boyfriend Ned Nickerson, but she was careful not to rely on him too much. The book's final exchange was a masterful display of the coy deferral that was Nancy's trademark when it came to Ned, which I loved as much as the craggy cave scenes and the road trips in the famous blue car.

“Mysteries!” Ned exclaimed, turning out the lantern. “Haven't you had enough of them?”

Nancy was sure she never would have. Soon an intriguing invitation would involve her in another baffling mystery,
The Clue in the Old Album.

“Anyway,” said Ned, “there's one puzzle I wish you would solve for me.”

“Why you always change the subject when I try to talk to you about something that isn't a bit mysterious!”

Nancy smiled and said, “Ned, someday I promise to listen.”

The books I read had been my older sister's. They were hardback, with alluring yellow spines and the cover illustration printed right onto the boards.
The Mystery of the Tolling Bell,
in particular, had numerous chocolaty fingerprints on the pages where the action was tense. I happened to know, though, that there had been other editions before these; my mother had described them to me. Her Nancy Drews were royal blue hardbacks with a shocking orange silhouette of Nancy and her magnifying glass on them, covered in bright dust jackets illustrating a scene from the plot. She had read them with a zeal equal to mine all through the 1940s. These booksâor, rather, their absenceâhad long since attained mythic status in our household. One of the most familiar refrains of my childhood was my mother lamenting the loss of her Nancy Drews, which had been given away by her mother to other gleeful recipients after she grew up. If only she had known, my mother would say, she would have told my grandmother to hang on to them for my sister and me.

But, of course, no one knew. No one knew that the girl detective dreamed up in 1929 by a wildly imaginative children's book author named Edward Stratemeyer would go on to become one of the bestselling characters of all time. Even Stratemeyer himself, who at the time of Nancy Drew's debut was a juvenile publishing legend and millionaire thanks to the success of his earlier seriesâincluding the Bobbsey Twins and the Hardy Boysâdidn't have an inkling. No one knew that Nancy Drew would be adored by little girls for thirty years, and then, just as it seemed her power was waning, deified by women's libbers who recognized her as one of their own even though she would never have thought of marching for her rights or against a war: “I was such a Nancy Drew fan .Â .Â . and I'd love to know how many of us who are feminists right now in our 30s read those books,” the president of the National Organization for Women (NOW) told a newspaper in 1976. No one knew the sleuth would be turned into a movie character in the 1930s and a TV character in the 1970s, and that both ventures would be, instead of the instant hits that were anticipated, total failures. It turned out that regardless of the decade, readers were so loyal to the Nancy they knew that even the slightest change in appearance or tone made them furious.

But what her fans didn't realize was that Nancy Drew had not remained static on the page, either. The books I read as a child in the 1970s were not the ones my mother had read, even when they shared a title. The sleuth had become at once more modern and more genteel in the intervening years, and her adventures had gone from the atmospheric yarns of the early daysâlots of rainstorms and scenic descriptionsâto more action-packed, streamlined plots that fared better in competition with television and the movies. She had been through two different writers and a host of editors, all of whom tried to imprint her with their own beliefs about who America's preeminent teen detective should be. But even had I been aware of this, it wouldn't have made a difference. My Nancy was the real Nancy as much as my mother's was, and all of these Nancys had long since elevated the character from the pages of cheap serial novels into the pantheon of American culture.

The reason for this exalted progression became clear when I recently read all fifty-six original Nancy Drews. I discovered that the series often relies on formulaic dialogue, totally implausible escapes, and absurd plot twists that Agatha Christie would never have approved of. But I also realized that the stories themselves are secondary. What we remember is Nancy: her bravery, her style, her generosity, and her relentless desire to succeed linger long after the last page has been turned, the villain sent to jail, the trusty car put into the garage. Even though hardly anyone can recall what, exactly, went on in
The Hidden Staircase
or
The Whispering Statue
or
The Quest of the Missing Map,
we know precisely what it was about Nancy that held our rapt attention for so many years. She remains as much a part of the idea of American girlhood as slumber parties, homework, and bubble gum. As one editorial published in the early 1980s asked, perfectly seriously: “If there is a woman who during childhood's hours did not mold a clay dish, bake an Indian pudding, join the Brownies, and carry the high notes of the National Anthem at school, is there one who never read Nancy Drew?”

There was not then, and there is not now. Rarely a year has gone by in the last fifty or soâever since the first generation of little girls who read the Nancy Drew Mystery Stories got old enough to write newspaper and magazine articlesâwithout someone, somewhere, attesting to the power of the teen sleuth in passionate print. Among the paeans are essays by wives, lawyers, doctors, journalists, and even the occasional father. Feminist mystery writer Sara Paretsky wrote a tribute to her called “Keeping Nancy Drew Alive.” Another adoring fan titled her valentine to the teen detective “I Owe It All to Nancy Drew.” Novelist Bobbie Ann Mason went so far as to write an entire book about the beloved girl detectives of her childhood, with Nancy as its star. “I'm still a girl sleuth, setting my magnifying glass onto words and images and the great mysteries of life,” she writes in the introduction to the new edition (originally published in 1975, the book was reissued in 1995).