Girl Takes Up Her Sword 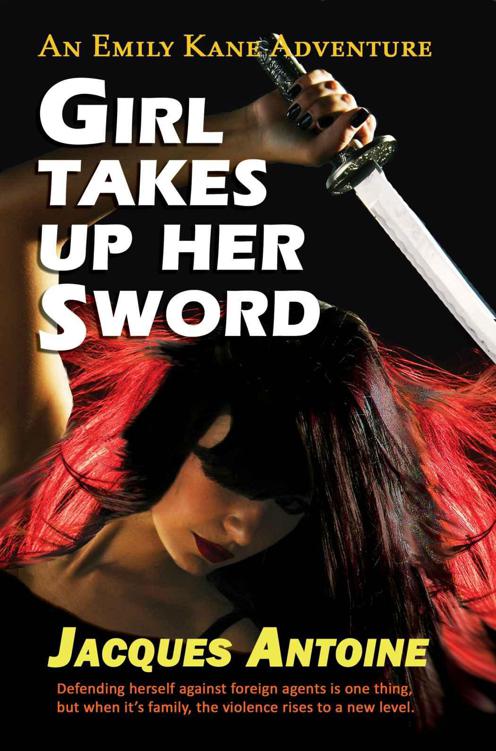 Girl Takes Up Her Sword

All rights reserved. No part of this book may be reproduced in any form or by any electronic or mechanical means, including information storage and retrieval systems, without permission in writing from the author, except by a reviewer, who may quote brief passages in a review.

Sign up
to be notified of new releases in
The Emily Kane Adventures
.

To Jenny and Miki

For their love and patience

And with gratitude to Chez for reading it,

And to Calvin Kim and John Chang for showing me Seoul.

And to my friends at Neverland

For their endless good will and encouragement.

Susanoo, the god of sea and storm, gave his sister Amaterasu, the goddess of the sun, a gift to appease her anger. The sword, which he found in the tail of a dragon, eventually came to be called
Kusanagi
, the “grass-cutter.” Amaterasu bequeathed it, and dominion over the earth, to her son, Ninigi. It passed from father to son until it came into the possession of the first emperor, Jimmu Tenno.

The sacred sword is one of the official symbols of the Japanese imperial family, along with a jewel and a mirror. As with all symbols of authority, the sword, the jewel and the mirror have always been targets of intrigue. They have been lost or stolen and recovered on several occasions.
Kusanagi
has not been seen in public in several centuries.

Chapter 1:
The Dojo on Okinawa—Twenty Five Years Ago

Chapter 4:
Meditating with the Midshipmen

Chapter 5:
What Happened in Kamchatka?

Chapter 6:
Playing With the Security Guards

Chapter 8:
In the Golden Triangle—Twenty Three Years Ago

Chapter 14:
A Trip to the Mall

Chapter 17:
A Meeting at the Chosun Seoul

Chapter 19:
In a Plastic Playhouse

Chapter 22:
Through a Glass Darkly—Twenty One Years Ago

Chapter 27:
A Friend in Need

Chapter 29:
One day in Tokyo

Chapter 30:
Too Late to Run

The Dojo on Okinawa—Twenty Five Years Ago

His eyes closed, George Kane sat against one wall of the dojo, breathing in a slow, steady rhythm. An old, wooden structure, with a peaked roof, more like a shrine than a gym: a hard floor, half covered by a thin, straw mat. Landings could be painful. The air moving in and out made his lungs rise and fall. Eventually, he drifted away to another world—where, he didn’t know, but always the same place: a path through the forest, sunlight peeking through the leaves. Water babbled in the distance, but he never seemed able to find it. The sound soothed him.

He dreamt of being an Army Ranger once, but that didn’t work out as he had hoped. Small as Rangers go, he didn’t back down from the bullies. Someone must have thought he was going to get seriously hurt, though the only one who actually suffered an injury was that big oaf McIntyre. He pushed George’s head down and grabbed him around the neck one day, holding him bent over so his pals could humiliate him from behind. In a moment of inspiration—who knew where it came from... certainly not from any training he’d received—George locked McIntyre’s elbow so he couldn’t let go. With knees together, he pulled himself down and rolled backwards. Before McIntyre knew what was happening, his face crashed into the concrete floor. George kneed him in the groin to get the semiconscious, moaning lump off of him.

When they saw what had become of his face, McIntyre’s friends backed away in horror. George stood across the body from them glowering. An official inquiry discovered nothing, because no one wanted to admit what really happened. McIntyre’s face spoke for itself, as well as his dislocated shoulder and broken elbow. Even if he or his friends had fessed up, and even if the Sergeant believed them, it wouldn’t have gotten them any sympathy. Rangers don’t pick fights and lose, and if they do, they don’t whine about it. And they certainly don’t lose to pipsqueak.

George didn’t know how Meacham did it. Pulled some vast tangle of strings, he supposed. Whatever it was, he ended up in the Marines, stationed at the Air Station at Futenma, on Okinawa. He hadn’t asked for anyone’s help, and had no idea what Meacham’s interest was. But whatever it was, he had to admit this was a better assignment. Fewer bullies, better training, and he was finally out of Kansas.

The memory of McIntyre’s face pulled him out of his reverie, out of the forest in his mind, as it always did. And one of the Marines in the dojo was yelping in pain. Half speed, mixed-style sparring—the blend of
shotokan
,
judo
and
kung fu
Sensei encouraged—had gotten out of hand. Somehow, whenever David Walker was involved, things always got out of hand.

This time, even though he had already won—a pain compliance hold, his opponent tapped out—he twisted the arm a little too far and dislocated the shoulder. Everyone else there knew he’d done it on purpose. George knew it, too. Something had gone decidedly wrong inside Walker, a cruel streak so palpable you could practically see it gleaming in his eyes. Sensei seemed to be at great pains not to notice it.

“George, your turn,” he growled.

He took up a position opposite David. The other students, the ones not massaging a shoulder back into place, sat in a loose circle around the edge of the room. What did Sensei expect him to do, teach him a lesson, or endure his cousin’s sadism? Breathing held the answer. That’s what Sensei always said.

When he breathed out his puzzlement, he breathed in something else. The air felt cool… and dark, but too close to be in the forest. A restless spirit moved about in the shadows, scaly, serpentine, claustrophobic. He wanted to get out, and so did the snake coiled everywhere in the cave. This must be how his cousin felt all the time. It was the basis of his cruelty, the key to how he thought.

David stood in a fighting stance, fists forward, one foot ahead of the other. George held one hand out, as if he were greeting a friend, the other hand underneath, as if to receive a gift.

A hasty, urgent punch combination followed inevitably, predictably, and to no effect. David tried another, and another. But George’s hands seemed impenetrable, sticky. How could he know what was coming even before David did? He slapped each blow aside, controlling his hands without taking hold, each time holding a counterstrike at the ready. To grab on would limit his options, make him vulnerable—that’s how the sticky hands kept David off balance, the threat of each counter preventing him from committing himself completely to an attack.

Finally George struck him, not full force, a palm-heel strike just under his right ear. The sound of the contact was audible across the room. Everyone could see how it infuriated him. After a quick, sullen breath, he attacked again and George struck him on the other side.

He felt his cousin’s temper tipping over into recklessness, and knew what must follow. A low kick and simultaneous punch to the face, both full force, frantic. George kicked the foot and slapped the punch across David’s chest, then backhanded him across the nose, and punched him several times in the center of the chest before he could recover. None of the blows was full force, but David lost his balance and fell to the floor. George knew he had won, even if hadn’t beaten him unconscious.

David had different ideas. As George stepped off the mat, he kicked him in the small of his back, sending him crashing into the wall. Before he could right himself, his cousin was punching him in the back in a frenzy. A slight pause to catch his breath provided an opening. A quick turn, grimacing through the pain, a sticky hands block and two quick blows to the ribs and cheek, finally a full force side kick to the chest sent David to the mat. George stood over him, rubbing his back and glowering.

“Are we sparring or fighting, David? Let me know next time,
before
you decide to change the rules.”

On a bench at one end of the room, Robert Meacham sat watching and occasionally whispering to his neighbor, a distinguished looking Japanese man in a western-style business suit.

“The genetic profiling is fine, but you must have enough blood and tissue samples by now.”

“I don’t think you understand,” Dr. Kagami said. “Synthesizing a gene sequence and a viral delivery matrix is exceedingly difficult. You should expect at least ten years of failures before we have anything remotely resembling success, even if you double the funding. Selective breeding is much more reliable, and it won’t take much longer to build up a subject community.”

Meacham listened impatiently to an explanation he clearly had no interest in.

“Money means nothing. I need a working subject soon. You can’t accomplish that through a breeding program.”

“We found these two. Just tracing their family tree will yield a few more.”

“Maybe, but there’s an uncontrollable human factor that way.”

“I also have my doubts about the subject you’ve chosen. He’s clearly unstable. Even if we succeed, the likelihood of a viralized sequence getting into the general population is substantial. The other cousin is clearly a better choice, safer and with greater potential in all categories.”

“A little too much potential in the sympathy category. I need operatives, not social workers.”

“I don’t think I can help you, then. A ten-year commitment to a project I don’t believe in, with no possibility of publication. None of my people will accept that. They’ve got careers to think about.”

“So that’s it? You think you can just walk out on this?”

“Yes. You can shop the project around, but the answer will be the same everywhere outside of a government lab. I’ll send the samples back with the preliminary profile data.”

A large car idled out front. In the back seat, home on a break from university, a young woman waited for him.

“What an odd looking dojo. Who are those people, Dad?”

“Is this more gene tracing? You know how Mom felt about that.”

“I only do biochemistry now. You know that, Yuki-chan.”

His daughter looked at him skeptically.

“Then what brought you here? You’re not thinking of taking up karate again, are you?”

A tiny smile flitted across his otherwise stoic visage. “The Americans wanted us to profile a couple of Marines.”

“Why you? Don’t they have their own labs?”

“Who knows why they do anything? They offered an enormous sum of money.”

“It doesn’t sound like a good idea. I hope you turned them down.”

“Of course I did,
Ohime-san
. You sound just like your mother.”

“I wish you wouldn’t call me that. Mom hated it, too.”

“It’s how I always think of your mother. And you remind me of her.”

The next day, Kagami ordered his head lab technician to return
almost
all of the samples and data to the US Consulate in Naha. He lied to Meacham about one thing. He was interested in the project, but not as a synthesis of gene sequences taken from David Walker’s DNA.

Deeper Than Need by Shiloh Walker
Lamp Riders: A Jinn Motorcycle Gang Novella by Augusta Hill
Wed and Buried by Mary Daheim
Insurgents, Raiders, and Bandits by John Arquilla
Fame & Folly by Cynthia Ozick
Mutant by Peter Clement
My Year of Flops by Nathan Rabin
Worth Fighting For (Little Blue Book 1) by Tigertalez
Trusting Viktor (A Cleo Cooper Mystery) by Mims, Lee
A Worthy Pursuit by Karen Witemeyer
Our partner