Read Give Me Online 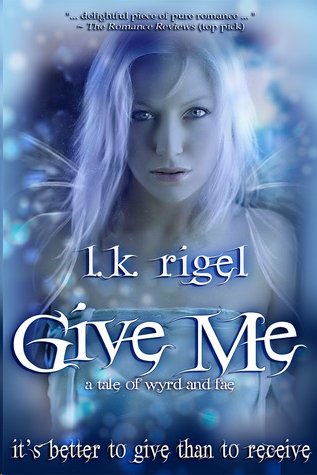 A young witch with a good heart.
Two lovers in mortal danger…

Lourdes’s place was empty. Elyse looked all around the hall, but Lourdes was nowhere.

“Diantha, I beg your leave.” Elyse left her chair. “I must speak with Galen.”

“She couldn’t stop thinking about Frona, so she excused herself,” Galen said. “She said she didn’t want to spoil the celebration.”

Elyse wanted to believe that was the problem,but a bad feeling churned in the pit of her stomach.

She left the banquet to find her sister.

She found Lourdes in her room leaning out of the window, her arms outstretched. “What are you doing?”

Lourdes whirled around, her face purple.“Can’t you ever leave me alone?”

… A spell that ends in disaster.

“I think I’m in love…Yes, this hardened feminist shell that I wrap around me like a coat-of-arms melted as I read this delightful piece of pure romance.” ~
The Romance Review
s (top pick)

“If you are looking for witches, fairies, royalty,mystery, catty French girls, and a bit of lusty love—then this book is for you.” ~
Fictional Candy

Cover and interior design by TERyvisions

This book contains material protected under International and Federal Copyright Laws and Treaties. Any unauthorized reprint or use of this material is prohibited. With the exception of quotes used in reviews, no part of this book may be reproduced or transmitted in any form or by any means, electronic or mechanical, including photocopying, recording, or by any information storage and retrieval system without express written permission from the publisher.

This book is a work of fiction. The names, characters, places, and incidents are products of the writer’s imagination or have been used fictitiously and are not to be construed as real. Any resemblance to persons, living or dead,actual events, locales or organizations is entirely coincidental.

For Dixie,
who believes in my magic.

BOOK ONE OF THE TETHERS SERIES The events in this tale take place in an alternate England one might recognize if Cornwall were replete with iron instead of tin and copper and Tintagel Castle had been built hundreds of years earlier. I hope, dear reader, you’ll grant me poetic license in this fantasy and that this story will entertain your fancy.

C
old and salty winds drove
in over the Severn Sea and blew Frona’s hair in every direction. She pulled her cloak’s hood forward and stepped behind Igdrasil, the ancient oak which clung to the cliff edge. Since dawn a bank of clouds had approached land from the western ocean. Frona had watched, drawing strength from Igdrasil, and waited.

Aeolios was in those clouds, and he was angry. The god of wind was furious with her for the Great Wyrding.

As a favor to King Jowan, Frona had altered the vast deposits of iron ore buried beneath Dumnos. In human terms, the spell was her greatest success. The king had ordered songs composed and tapestries woven to commemorate the awesome deed. Dumnos now had steel to rival that of any kingdom. It made for lighter cauldrons and more durable horseshoes, and superior swords for the knights.

This morning the king was safe in his bed at Tintagos Castle, and Frona was left to deal with the god’s wrath. She’d made a mistake in the wyrding. She hadn’t considered its effect on nonhuman realms.

Driving rain joined the wind to announce Aeolios’s arrival. When he was at peace he rested in the bowels of Dumnos, but abroad he commanded the wind. Wind—but no thunder, no bolts of lightning.

“Face me, wyrding woman!” A blast of wind whipped around Igdrasil and blew back Frona’s hood. She sighed. Yes, she’d caused him grief, and he
would
complain, but he was a minor god. “Your contempt for the natural law will not go unpunished!”

The vibration of his voice passed through her and left a residual of nausea. She
had
gone too far. It was all in a day’s work to bend and guide the material world, but it was a dangerous business to change anything’s fundamental nature. But she wouldn’t admit that to Aeolios. She stepped away from Igdrasil. As a precaution, she set a boundary around herself and the tree, like a bubble, a shield against his temper.

The clouds consolidated and darkened over the waters in the bay and rose in a black billowing flume larger than Igdrasil. The perfect shape of a man formed with eyes that flashed like fire, a gigantic torso, shoulders, and arms.

Frona let out her breath in relief. Aeolios could appear in whatever form he chose, and he’d made himself handsome in her eyes. He wanted something. It would make him easier to deal with.

“Mighty Aeolios, I meant no harm.” Of course the god of wind adored flattery.

But what did her intentions matter? The Great Wyrding may have pleased the king and thrilled the people, but the change in the iron had rippled into every other thing. There would be consequences, but she’d answer to Brother Sun and Sister Moon. Not Aeolios.

“I will allow you to atone for your foolish act.” He smiled. Now
that
was unnatural. In Aeolios, the attempt at a calm demeanor was unsettling. “I am not unreasonable.”

Ha! Aeolios was unreasonable by his very nature. “And how would you have me atone?” Frona said.