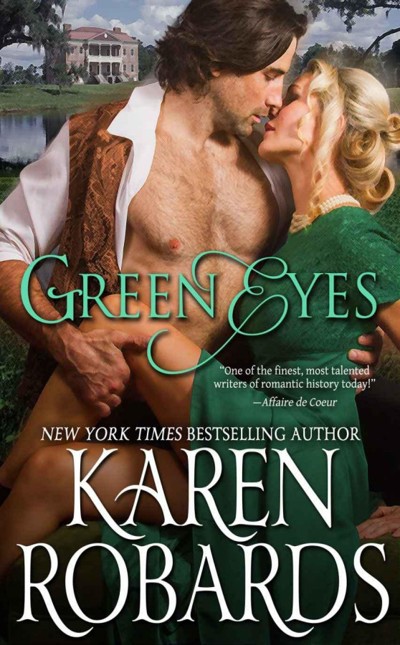 Young, beautiful, and destitute, widowed Anna Traverne finds herself at the mercy of her brother-in-law Lord Ridley, who offers her and her little daughter a home for a price: Anna must become his mistress. Frightened, revolted, gently bred Anna can see no way out -
until a handsome jewel thief breaks into Gordon Hall in search of a fabled set of emeralds.

Surprised by Anna in the act of purloining the jewels, Julian Chase is captured and carted off to Newgate to hang for the theft. The emeralds remain missing; despite being tortured, Julian insists he has no idea where they are. By the time he manages to cheat the hangman, though, Julian has figured out what must have happened:
the green-eyed angel whose screams led to his downfall had to have taken them.

And he is right:
finding herself in possession of the emeralds after Julian's capture, Anna seizes on the chance to escape from Lord Ridley and flees to the tea plantation in Ceylon that is her home.

But once Julian knows the truth, he comes after her, traveling halfway across the world to reclaim what he feels is rightfully his -
and to take a sensuous revenge on the larcenous young beauty whose fate he now holds in his hands.

“IN THE TOP RANK OF ROMANCE WRITERS.”

“HER PARTICULAR BRAND OF ROMANCE IS FASCINATING.”

“ROBARDS HAS A KNACK FOR TELLING A STORY.”

“[ROBARDS] TURNS ROMANCE INSIDE OUT.… SHE HAS THE ELEMENTS OF GOOD WRITING DOWN.”

“KAREN ROBARDS IS ONE TERRIFIC STORYTELLER.”

D
ARK OF THE
M
OON

D
ESIRE IN THE
S
UN

All Rights Reserved © 1991 by Karen Robards

No part of this book may be reproduced or transmitted in any form or by any means, graphic, electronic, or mechanical, including photocopying, recording, taping, or by any information storage or retrieval system, without the written permission of the publisher.

To Christopher Scott–
Welcome to the world, April 7, 1990! And as always. With love to Doug and Peter.

T
he choice was a simple one, Anna Traverne reflected dismally: agree to become Graham’s mistress, or starve.

If she had only herself to consider, she would choose starvation with scarcely any hesitation, but there was Chelsea, too. In the end Anna knew that mother love would prove stronger than pride, morality, or physical revulsion. She simply could not allow her five-year-old daughter to be thrown with her into a cold and uncaring world when it was within her power to prevent it.

But the idea of lying with her brother-in-law, of suffering his hands on her person and his body invading hers, made her physically sick.

“Dear God, please help me find some way out of this mess.” As a clergyman’s daughter, she naturally turned to prayer when she was desperate, but Anna uttered this one without much hope. Lately God hadn’t seemed particularly interested in listening to so insignificant a being as herself, so the whisper was more an automatic response to her upbringing than a heartfelt plea for divine intervention. She had prayed so much and so hard during the last harrowing hours of her husband’s life that she now seemed to be incapable of sincere prayer. She had broken down completely at his funeral. Since then, her emotions had been muted. She had not felt anything—not hatred, or fear, or love, or even grief—very intensely. It was as if a cold gray fog had fallen over her life.

Six months now she had been a widow and the last three of those, at Graham’s insistence had been spent in England. From the moment she had first set foot again in Gordon Hall, Graham had been after her. At first he’d been subtle, and she’d hoped she was mistaking the motivation behind his overly enthusiastic kisses and squeezes. After all, she was the new widow of his younger brother, his only sibling. Perhaps lavishing caresses on his brother’s relic was how he dealt with his grief. But even as she had tried to convince herself of that, Anna had suspected differently. She’d known Graham too long, and too well, to truly believe it.

Graham had wanted her from the time the three of them were children together. Wanted her, not loved her. Paul had loved her, despite the fact that she was only the daughter of the local vicar, when he and Graham were the sons of the rich and powerful Lord Ridley. And she had loved Paul in return. They were the same age, their birthdays only one month apart, and from childhood he had been her dearest friend. Marriage had only slightly altered their relationship. Theirs had been a happy union, full of mutual affection and respect, and devoid of surprises on either side, so well had they known each other. Anna had fully expected it to endure, and ripen, over the course of their natural lives. Then, at the unbelievably young age of twenty-four, Paul had died. With his death her life, and Chelsea’s, had shattered like fine glass.

Unlike the bull-like Graham, Paul had been slender, with a pale complexion and flaxen hair so like Anna’s own that strangers had sometimes mistaken them for brother and sister instead of husband and wife. But for all his appearance of fragility, Paul had always seemed perfectly healthy. Although, as Anna’s father had often said, appearances could be deceptive. After Paul’s death, the doctor had told her he must have always had a weak heart.

They had made a runaway match of it. Their act of defiance had left Paul’s autocratic father and brother screaming with outrage, though for very different reasons. After the wedding, old Lord Ridley had objected because Anna, as a mere clergyman’s daughter, was not a fit wife for his son. Graham had been angry because even then he had wanted Anna for himself. Oh, not to wed, of course—Graham had too high an opinion of himself for that—but to bed. The very idea had sickened Anna then just as it sickened her now. Paul’s father had cast him off, and the newlyweds had found themselves almost completely without funds. Their sole resources had been a small legacy left by Paul’s long-deceased mother and a tea plantation on the island of Ceylon that had been his mother’s girlhood home.

Anna and Paul had been young and high-spirited, and so in love that they hadn’t cared. They would take up tea planting and make their own way. It had seemed a marvelous adventure at first. The very strangeness of her new home had entranced Anna. But the hot, steamy climate of Ceylon had never agreed with Paul. After Chelsea’s birth, he had fallen prey to a succession of fevers that had left him thin and paler than ever, and had weakened his already less than robust heart. At least, so had said the doctor, finally summoned against Paul’s wishes by Anna when he had been stricken yet again with one of the everlasting tropical illnesses that continually plagued him. That particular fever, generally mild, should not have killed him—but it had.

“Why didn’t we come back to England as soon as we saw the climate didn’t agree with him?” Guilt served no purpose, Anna knew, even as she muttered the agonizing thought aloud. But the knowledge that Paul would still be alive had he never married her and as a consequence been forced to leave his home was always there, lurking on the edge of her consciousness. In a way, she had killed him, she and his unforgiving martinet of a father.…

Anna shivered as a waft of cold air unexpectedly reached her, and pulled the shawl that covered her night rail closer about her neck. She was huddled in a big leather wing chair in front of the tiny fire she had built in the little-used library, and until that icy finger had touched her she had been toasty warm. Where could the draft have come from? She had taken good care to close the door from the hall, and the windows of the second-story room were shut tight, their dusty velvet hangings drawn.

“Paul?” Even as she breathed it, his name no louder than a soft exhalation of her breath, she knew the very notion was absurd. But ridiculously, she allowed herself a moment’s fantasy that the chilling touch might presage a visit by Paul’s ghost. She had felt so terribly alone since his death that she would welcome even his shade. What a relief it would be to lay her burdens on his shoulders, even if for no more than a minute or two! She was so very tired, so close to despair, and there was no one in the world who cared. Her own family was dead, and of Paul’s only Graham was left. Lord Ridley had died a scant month before his younger son. As for Graham—Anna thought for what must have been the hundredth time that she would almost have been better off with no one at all to turn to. When he had offered to let her and Chelsea make their home with him, she should have known better than to trust him. But Paul’s death had left her and Chelsea destitute; by the terms of Paul’s mother’s will, even the plantation had reverted to Graham upon his younger brother’s death. When Graham had offered them a home, Anna had been grateful, even eager to return to England for Chelsea’s sake. Of course, then she had not known the price she would be expected to pay.

Even before she had left with Paul, Graham had clearly noticed that the little girl who had run tame at Gordon Hall had grown into a desirable young woman. In that last year before she became Paul’s bride, Graham had tried by fair means and foul to lure her into his bed. Why should she have expected the passing of six years to have changed him? The only difference she found at Gordon Hall upon her return was that old Lord Ridley was dead, which just gave Graham, who was made in the old lord’s insufferable image, that much more power.

One For Sorrow: The Veil Series, #5.5 by Pippa DaCosta
Star Trap by Simon Brett
Sins of the Mother by Victoria Christopher Murray
Infinite by Jodi Meadows
Forever Ecstasy by Taylor, Janelle
Tidal Wave by Arend, Vivian
Police and Thieves: A Novel by Peter Plate
Billionaire Blend (A Coffeehouse Mystery) by Coyle, Cleo
Crimson Rising by Nick James
The Invisible Mountain by Carolina de Robertis
Our partner