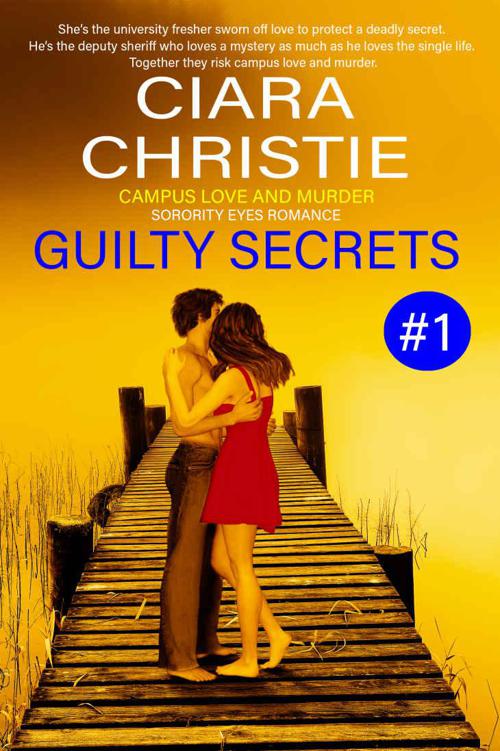 All rights reserved by the author. No part of this book may be reproduced in any form by any electronic or mechanical means including photocopying, recording, or information storage and retrieval without permission in writing from the author.

This is a work of fiction. Names, characters, businesses, organizations, places, events and incidents are either the products of the author’s imagination or used in a fictitious manner. Any resemblance to actual persons, living or dead, is purely coincidental.

Get the exclusive newsletter at
www.CiaraChristie.com

Her heart felt like it was about to explode. The whistling in her ears screamed at her.

All she could see in the darkness were snow covered branches reaching out for her. Sharp like fingernails, gouging deep scratches into her arms and face.

The shouts behind her were getting louder. They were gaining on her. Closer with every second.

She ran, turning this way and then that way. She was lost.

If she could just find the road. Help would be waiting. It was promised. It was the only thing that kept her going.

There was no going on. Turning back was impossible. It was the end.

But the desperation in their voices betrayed their intent. She knew she had no choice. She turned towards the white foam and bubbles exploding up at her. She closed her eyes and stepped into the darkness.

She had no idea how long she fell. Long enough for her scream to be exhausted before she hit the icy water below. She sank. The cold of the water crushed the breath from her body.

But she wouldn't give up. Not after what she had seen. The truth must come out.

She exploded up through the surface with frantic arms and legs kicking for her survival. Moving her arms felt like lifting concrete. Her legs, so heavy, floundered, threatening to drag her under.

But still, she wouldn't give up. At last, she made it to the shore. With the last of her strength she hauled herself onto the pure white snowy bank.

But there was nothing left for her legs. They dangled in the river. Quickly freezing.

And then salvation came. She was sure of it. She recognized the silhouette breaking out of the dark trees.

She found the strength to cry out, "Help me."

The figure striding towards her said nothing. They had something in their hand. Pointing at her. Her eyes grew wide as it came into view.

The shadow of the gun barrel engulfed her.

Her last thoughts were for innocent Robyn. How her death would unleash a living Hell upon her.

She looked up into the kind eyes she knew so well, and saw nothing, but the ice coldness of pure evil.

How could I have been so wrong?

When a girl makes a grab for freedom she should slam the pedal to the floor and shriek until the world takes notice, right? At twenty one and about to embark on the greatest adventure any under graduate could imagine, you bet I'd make the world sit up and take notice. Before they knew what hit them, the cool squad would pay tribute with cries of "all hail Robyn!"

I was going to be inside their cliques in a nanosecond. I'd be one of them. Trusted. Like an acid based exfoliate peeling away at the outer skin of secrets and lies to get to the vile truth that led me to Kimberley University.

With no ties, no boyfriend's lies and just a secret mission, who was going to stop me? No one, right?

Just one golden rule: Avoid love at all cost and focus on the pursuit of truth was the plan for Robyn White. With a plan like that I was invincible, right?

So very wrong in so many ways.

I spotted the only parking space within a mile of the Kimberley University admissions building at the head of Fresher Week. Like a kamikaze pilot I gunned my open top Beetle Rust bucket. Skidding on wet leaves, I slammed my Rust Bucket between two fat and smug Mercedes-Benz convertibles. Like the unfortunate meteor that gouged out the Grand Canyon a few million years back, my fender plowed a deep canyon out of the pristine German paintwork. I kicked out at the brake to punctuate the heart breaking sound of my bank account emptying into the gutter.

Four bulging suitcases leapt out of my back seat and pummeled me into submission. Catapulting forward out of my seat, I head butted the horn in the center of the wheel and freaked out a flock of pigeons. Rubbing the air bag bruise on my forehead I listened to the silence. Nobody seemed to have noticed.

Am I that much of a loser that no one cares when I screw up?

Do I make a run for it and if I'm caught hauling these cases to my new campus apartment, pull the little victim act and flirt my way out of this mess?
I heard my Loser-ville self-esteem cry out:
Head butt the horn a few more times until some dashing Knight in shining armor comes to your rescue.

My illusion of freedom was soon dashed. The lights of a campus cop car flashed in my rear view mirror.
Traffic Citation here we come.

A voice split my head in two like a human ice pick existing on an audio frequency that surely only dogs could perceive.

"Run to the cops before I waste your sorry ass."

I turned in my seat and spotted an immaculately made up, slender and beautiful ice-blond staring at me from the sidewalk. Striking a fearsome pose as if she was a cat-walk model and I was blocking her runway to her adoring fans. She was dressed head to toe in designer chic, giving me the finger and speed dialing a twenty four carat gold cell phone. She looked too perfect to be real.

All my fight or flight response evaporated and I sat there like a loser, intimidated by Princess Plastic.

"I'm so sorry," I shouted and fought back tears like I was head of the overnight queue in a two for one sale from Loser-ville.
Just add the damage to my school fee loans and give me another seventy five years to pay it off. Better round that up to a hundred to make it safe.

She smiled like a shark about to devour its prey.

"You will and in ways you cannot imagine," Princess Plastic screamed. She marched across to me and slapped me hard across my face before storming back to the sidewalk. She then put on an act of absolute mortification. It seems she'd chipped an expensive manicure on my tooth.

A tiny ember of self-respect dwindled in my consciousness and made a last ditch effort at resuscitating my down in the gutter reputation. I tugged at my car seat belt as stylishly as I could muster, like I was not in the least bit intimidated. Lie number one of the day.

My belt refused to comply and hurled me back into the seat as the last suitcase tumbled over me.

Flustered, to put it mildly, I decided to turn the key and start the engine like I intended to reverse out of Princess Plastic's life without a care in the world. For what reason I had no idea. But I needed to act like I knew I did. My inner loser demanded I impress Princess Plastic with my nonchalance.

I slammed Rust Bucket into gear like I don't give a damn about her calling the cops on me. A cop siren blasted a hole where my head should have been.

I punched the wheel. "Really guys? When I'm ten feet away?"

Rust Bucket's engine refused to comply and I turned the keys again, forgetting I'd left it in gear.

My faithful Rust Bucket in perfect symbiosis with my panic, jolted violently, lurched forward and crashed to a stop at a fire hydrant. A torrent of water burst upwards like a Yellowstone Park geyser. One of my suitcases took off into orbit before falling back to earth. Exploding like a shooting star, showering the windshield and the sidewalk like a rainbow colored Independence Day fireworks display of my entire underwear collection to the world.

There was the days of the week collection. The thong-tastic girl's got to party selection. The something lacy and sexy, but perfectly comfortable every day collection for that unexpected after-work romantic liaison. The sporty briefs for the get up and go girl. Even the granny knickers for that special time of the month when I needed to curl up with chocolates and a steamy romantic ebook and pretend I'm sexy.

I wriggled free of the seat belt, climbed out over the windshield and onto the hood to be greeted by the mountain of my underwear floating across the sidewalk.

Plastic Princess pulled my pair of secret granny knickers from her perfectly coiffured hair. Both were now dripping and drooping down in front of her eyes. Much to the amusement of the campus cops.

Being upstanding citizens devoted to serve and protect, the campus cops did their duty and waded in after my drowning panties. One of the cops scooped up an armful of my drowning knickers. He straightened up. He was tall, muscular, chiseled and dripping with hotness. With a perfect toothpaste commercial smile, Officer Hotness said the one thing guaranteed to make me wish I'd died and gone to a special Hell for people who want to be cool when they should know better. Instead of going to Hell I was very much alive and about to hear him say: "Ma'am, I found Monday to Friday but Saturday floated away before I could save it for you."

I stared at his perfect smile and acted like my wobbly knees were a disability I was born with. If he was a gentleman he'd do one or both of two things. One; he'd act like he didn't notice my pathetic drooling lust. Two, he'd skip the citation and catch me gracefully when my knees finally gave out and I collapsed.

Realm 05 - A Touch of Mercy by Regina Jeffers
The Executive’s Affair Trilogy Bundle (Trinity, Desire, Unconditional) by Nelson, Elizabeth
Who Cloned the President? by Ron Roy
Tomorrow and Tomorrow by Thomas Sweterlitsch
The Sweetheart Racket by Cheryl Ann Smith
The Pursued (The Breeding Prophecy) by Andria, Alexx
Elixxir (The Brethren Series) by Remiel, Deena
Stalemate by Iris Johansen
The City of Dreaming Books by Moers, Walter
The Musashi Flex by Steve Perry
Our partner