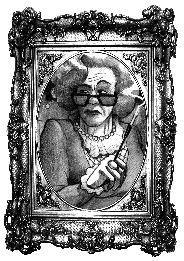 I tried to sit up, but I couldn't lift my head. I struggled to get my eyelids open, but all I could see was a shining white light.

Oh great. I'd overdone it and given myself a real heart attack.

A woman leaned over me, blocking the light. She had her hair in a short bob that would have been trendy three years ago, and a set of enormous clunky glasses that did nothing for her face.

OK. Obviously I wasn't dead. While I might buy that God was a woman, I was not about to believe that she couldn't afford a decent haircut and contact lenses.

"The doctor has given you a sedative," the woman said without moving her lips.

Just my luck. I get a nurse who's a ventriloquist. Probably heard that I have show biz connections, and wants to show off her act. Well it could have been worse. I could have woken up in the mime ward.

One of my boys stepped into view behind her and put his hands on her shoulders. He was dressed like a security guard. In my muddled state, it took me a few seconds to realize that he must have come straight from the set.

"We're at Grey Hospital. You collapsed outside the set. Uh... you should have warned us that you were coming."

His voice was deep and warm and reassuring, like a blanket that I could wrap myself up in. Even when he wasn't trying, it was the voice of a star.

"I wanted to surprise you," I said.

I tried to look around for the other boys, but I still couldn't lift my head from the pillow.

"Are your brothers here?"

Charles looked away for a second.

"Well... the director said that one of us had to stay on the set. We're already behind schedule. Bernie didn't want to, but..."

Poor Charles. Great actor, lousy liar. I knew what was really going on. Bernie didn't want to see me like this, lying in a hospital bed. I should have known it would upset him.

Then a thought occurred to me.

"Oh no! Has anyone talked to Albert yet?"

"No mom. He's on location in Thailand for that pirate movie. It's still the middle of the night out there."

"Well someone needs to call and tell him that I'm all right. We don't want him to see something on the morning news that panics him into flying halfway around the world just to be here."

"Uh... I'll take care of that. I also tried to get through to Eddie back in LA, but he's not answering his phone. He's probably..."

"Yeah, I know," I said, sparing him the necessity of making up another excuse for his wayward brother. "Why don't you go see what's keeping Doug?"

Charles nodded and went out, leaving me alone with the girl in the funny glasses.

"Don't be silly!" I said. "Of course he's told me all about you. Although I must say that I didn't believe him when he told me how pretty you are. But now I see that he wasn't blinded by love after all."

Actually, Charles hadn't said a word about her, and I was forced to get all the really juicy gossip from Eddie. He's the only one who calls me anymore. Figures, since he's the only one without a regular job to keep him busy. I can't understand why Charles would talk to Eddie about his girlfriend but not me.

"I had hoped that we would meet under better circumstances."

"Yes," I said in agreement.

I tried to look at her eyes rather than her mouth. The whole talking without moving her lips thing was really kind of creepy. Of course, now I was looking at a little subtitled version of our conversation scrolling by on her glasses. I just wasn't gonna win with this one.

She nodded. I waited for her to say something else, but she just sat there staring silently at me. Apparently conversation was not one of her skills. Unfortunate, because she was not the sort of woman who could get by on her looks, either.

I had to wonder what Charles was doing with her. He was at the top of his career. He had a hit series, he was idolized by millions. The world was his oyster. He could be dating super models, or actresses, and yet here he was with this skinny deaf girl. And a writer, too! I could have understood it if she was a director or a producer or a studio exec. But a writer? What was the point?

We sat there in silence, looking each other over. A minute went by. Obviously, it was gonna be up to me to carry the conversation.

It was a stupid question. Of course they were out there. Probably lined up three deep waiting to find out if I was gonna live or die. Good thing I can think on my feet. I'd managed to turn a story where my boys would have looked like insensitive jerks for turning their mother away into one about my own failing health. The boys would look like dutiful sons for coming to visit me in the hospital, and the whole thing would be a good plug for their series. And if any of the newsites used the footage of my argument with that guard, it would only be to show how his rude behavior brought on my attack. I know reporters, they like to have a clear villain for their stories.

"I'm afraid so. It's quite a madhouse out there."

"Oh dear. Um... do you by any chance have a mirror? I hate to think what my makeup must look like after all this excitement."

She produced a compact from her purse and held it open for me so that I could survey the damage. Something had rubbed away my makeup in an outline around my nose and mouth. The oxygen mask, I realized. It made me look like a chimpanzee.

"I could fix that for you, if you want."

I started to agree, but then I took a good look at what she'd done with her own face and through better of it. "...nice. But I think I'll just wait until the sedative wears off and do it myself."

The door to the room opened, and I heard the boys walk in.

Skye turned in the direction of the voices. I fumbled around with the control for the bed, and finally got my head elevated enough to see what was going on.

"I'll tell you," Doug said. "Mom didn't have a heart attack. She faked the whole thing!"

"I didn't have a heart attack?"

"Um... no mom," Charles said. "Apparently not. The Doctor says your heart tests out fine. He thinks what you experienced was a panic attack, instead."

"Jesus!" Doug shouted. "Is that all you're gonna say? It doesn't bother you for a second that you scared everybody half to death just to get a little attention, does it?"

"Well, I am sorry if I scared you, but I will thank you not to raise your voice to me, young man. And I never said that I'd had a heart attack. You all told me that when I woke up, and I assumed that you knew what you were talking about. As for the panic attack... well, I'm not sure if I'm supposed to apologize for that or not. Is there some list of medical conditions that I can develop without inconveniencing you? If so, give me a copy and I'll try to restrict myself to it in the future."

"Are you at least happy that I'm OK? Or does that take a back seat to the fact that I upset your precious schedule? Well, don't let me keep you, when you obviously have more important places to be. God forbid you should miss a rub down or a squash game on my account."

Charles stepped in between us.

"Mom, don't you start up with this too."

"OK, I'm sorry," I said. "Does everybody hear that! I am sorry! I am sorry I got sick! I am sorry that it dragged you away from work for a couple of precious hours! And I am sorry that it was only a panic attack, and not something exciting like a stroke or a heart attack! Can I make it up to you by getting cancer?"

"Maybe if we just all take a step back and..." Charles started to say.

"And what? I have a panic attack and wind up in the hospital and my sons come to complain that I didn't get something more serious. How am I supposed to react to that?"

Doug started to say something nasty, but Charles cut him off.

"OK. That's it. By the authority of the secret brotherhood of super spies, I am hereby instituting the sixty second rule."

Doug glared at him, but went along with it. They walked into opposite corners of the room and stood there with their backs to me, not saying anything.

Damn. I hate this game. They invented it when they were twelve. Every time I start winning an argument, they do the "minute of silence" and kill my momentum. I never did find out which one of them came up with the idea.

I waited for them to count out the seconds to a full minute. Finally, they turned around and walked back to me.

"I'm sorry," Doug said, a little stiffly. "I did not mean to imply that I wish you would have a heart attack."

"Well, that's something," I said. "I just don't understand why you're mad at me. I mean, I wake up in the hospital, and you're all acting as if you're the ones who have been inconvenienced. What's the deal. If anything, this is a windfall for you. It'll be great publicity for your..."

"I KNEW IT!" Doug hissed. "I knew this was some sick publicity stunt!"

"No mom! Don't you get it? Do you have any idea what our lives are like? I leave my hotel room and I have reporters following me! I go to restaurants, and people try to steal the fork that I used! I can't even walk into a bathroom without having people point and whisper about me! The last thing we need is more publicity!"

"Oh, I know. It's really tough being loved by the world. Having people recognize that you have a gift, that you're something special. Well let me tell you, it gets a hell of a lot worse when they stop paying attention to you."

"No, I understand. I really do. You've got a hit series. You feel like you're on top of the world. You think you can afford to complain about being famous. But let me tell you, nothing lasts forever. And no actor is ever master of his own fate. If the world stops paying attention to a painter, he can still paint. A sculptor can still sculpt. A writer can still write. But an actor? You are always at the mercy of other people to give you roles. To give you the chance to show the world what you are capable of. And when they stop giving you those roles, it's over. Believe me, there is nothing worse than having that special talent, that spark, and no way to share it with the world. So that it just rots and festers inside you for lack of use. So forgive me if I worry about whether or not the world is watching you. Because I know what kind of gift you have, and what a damn shame it would be to waste it."