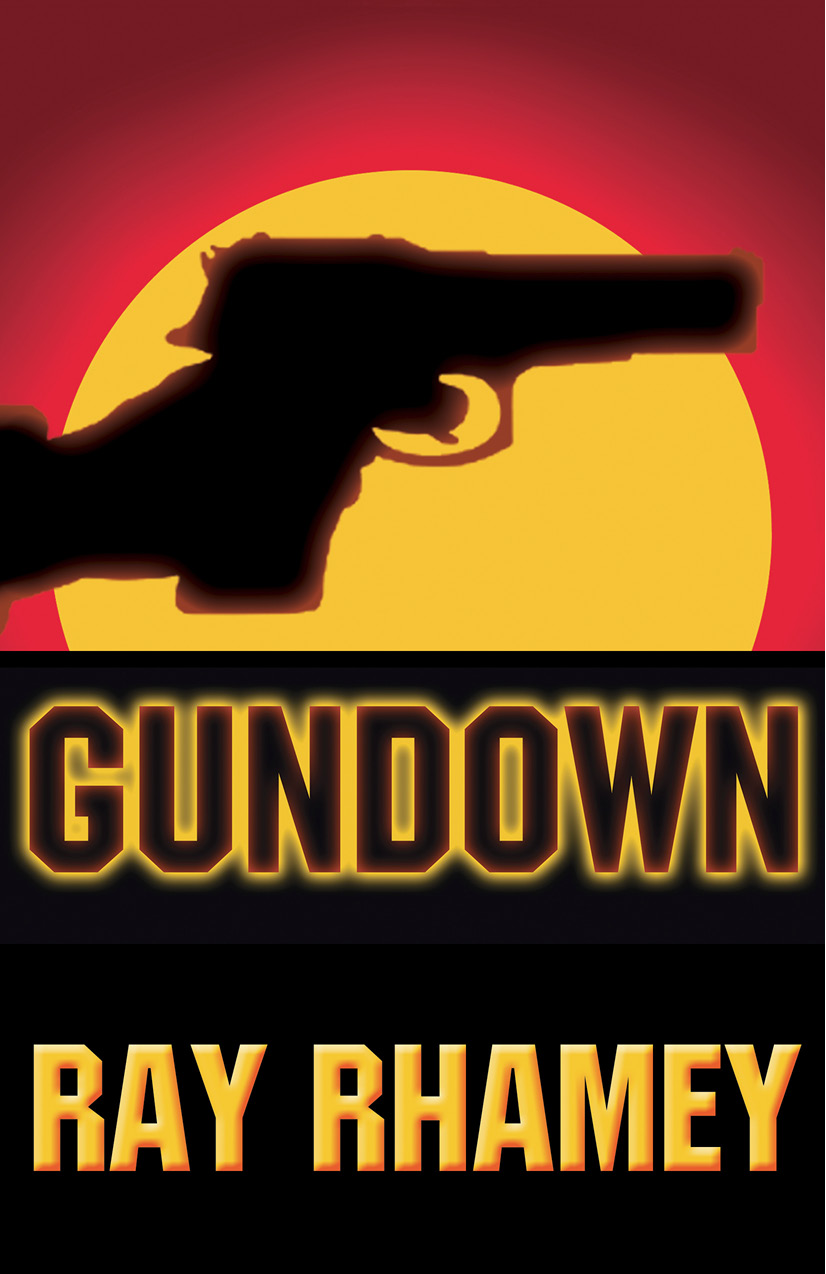 Other works by Ray Rhamey

Mastering the Craft of Compelling Storytelling

Instruction and coaching on writing craft

I urge you to share
Gundown
with as many people as you wish. And then talk about it.

The platypus breaks all the rules—it’s the only mammal that lays eggs, is venomous, has a duck bill, a beaver tail, and otter feet—and it does just fine, thank you very much.

It can be the same for novels that don’t slip tidily into genre pigeonholes. Platypus takes readers on unique paths to entertainment, truth, and enjoyable reads.

This book is a work of fiction. All characters, organizations, and locales, and all incidents and dialogue, are drawn from the author’s imagination and not to be construed as real.

Gundown
Copyright © 2016 by Ray Rhamey. Manufactured in the United States of America. All rights reserved. This work is licensed under the Creative Commons Attribution-NonCommercial-NoDerivatives 4.0 Internatinoal License. To view a copy of the license, visit http://creativecommons.org/licenses/by-nc-nd/4.0/legalcode. Published by Platypus, an imprint of Flogging the Quill LLC, Ashland, Oregon. First Edition.

This book was written for my children and their children, and for yours, in hopes that the America they inherit is an improvement on the one that gives rise to this story.

And it’s for people who work hard to live good lives, to leave this place better than they found it. It’s for you.

Finally, I dedicate this work to my wife Sarah, who would prefer that it was a mystery but has always helped me all along the way.

In a possible near future

The sky a sunny blue over Chicago, Hank sliced through the noontime trudge of pedestrians on Michigan Avenue. He couldn’t afford to be late for his meeting with the NRA guy, a VP no less. He had an important mission for Hank.

Oh, man, if only this meant a chance to have a life again. Maybe not as a cop anymore, but Hank would give anything to once more have a sense of duty, of purpose. He sure as hell didn’t miss his former life in the army, but he hated not being a cop, sworn to serve and protect.

He smacked down a spike of fear that his PTSD would get in his way today—so far, lifted by a rare feeling of well-being, he felt sharp, at his best. This could be his road back.

No, a road forward.

Damned if he was going to be another digit in veteran suicide stats.

A tiresome clump of a half dozen gang jerks swaggered toward him with cocky menace, three of them with pistols in their hands. Sure, they had the right to carry them, but these guys were pushing it. The gangbangers blocked most of the sidewalk, forcing people to step off the curb or sidle along a building front.

Hank didn’t step aside for fools. He slid his hand inside his Windbreaker to the familiar feel of the butt of his .45 in its shoulder holster. He locked his gaze onto the eyes of the center guy, who carried a Glock semi-automatic, and walked straight at him.

The kid kept his cool as they came together, but one stride from colliding, he dropped his gaze and sidestepped. Never slowing, Hank walked on.

This was going to be a good day.

Jewel Washington pushed through the lunchtime flow of people that filled the plaza beside the Chicago River, searching for Murphy. The lard-ass cop said he’d be here, and her brother would be hurtin’ bad if she didn’t get the pink Timmy needed.

A clot of gangstas swaggered through the crowd, dangling pistols in their hands, radiating dares no one answered. Creeps oughta get a life. Jewel cut wide, careful to avert her gaze even though she’d rather glare at them. But that could set them off.

Instead, she lifted her face to the spring sun. Its warmth promised good things. Maybe it would add to the spray of freckles like chocolate dots against the brown of her cheeks..

She spotted Murphy, a fat blue boulder parting a stream of girly secretaries hurrying to cram in their noontime shopping, a boulder that leered at their bobbing chests.

His piggy eyes stumbled across her when she closed in on him. He sent his gaze on its usual tour of her body—yeah, she was wearing a scoop-neck top and a miniskirt, but what the hell, couldn’t a girl enjoy a spring day without some slob feeling her up with his eyeballs?

When she got to him, she held out forty bucks for a packet of pink, the only thing that could stop Timmy’s withdrawal agony—for a while.

Murphy ogled her. “I decided to take it in services insteada cash.” He aimed a fat thumb at Pioneer Court behind him. “Got a spot for a quick hummer behind them bushes over there in the courtyard.”

I
n the shadow from the Equitable Building, raised beds of marble broke up the dreary pavement with boxes of green shrubs, trees, flowers, and a fountain.

She didn’t have another way to get the drug, but this was bullshit. She lifted her chin and looked him in the eyes. “You don’t want my cash, there’s dealers in the ’hood.”

“Bitch.” He snatched her money and handed her a packet of pink just as a bony white teen shuffled up to them, his nose leaking, body shivering, winces flickering across his face. Jewel had seen the same thing in Timmy—it had been too long since the kid’s last hit of pink.

He held out a handful of grubby bills. “N-n-need one.”

Murphy took his time counting the money while the kid jittered. It hurt to look at him, he was so much like her brother—she turned away. No, she wasn’t gonna go there. Too nice a day and nothin’ she could do about it.

Autumn Storm by Lizzy Ford
The Time of the Angels by Iris Murdoch
Disharmony by Leah Giarratano
ACCUSATION (Book One of The Criminogenic Trilogy 1) by Murphy, BT
The Last Concubine by Catt Ford
The Human's Complicated Wolf [Nehalem Pack 5] (Siren Publishing Classic ManLove) by AJ Jarrett
Fatty O'Leary's Dinner Party by Alexander McCall Smith
The Jaguar's Jewel by Ron Roy
Legends of the Fall by Jim Harrison
First and Again by Richards, Jana
Our partner