With Flarq clearing a path through the crowd outside the
courthouse, he, Nelson and me made it to the dock. The rest
of the crew was waiting in the fishing boat we’d come into
possession of when the pirates who’d owned it died while trying
to kill us.
We were aweigh in no time. The problem was the
Tortolan navy guys chasing us had boarded their cruiser just as
quick, and they’re right on our stern now.
Can we escape their veritable water rocket in our shlumpy
fishing brig? We have a chance. Here’s why:
Local lore has it that one morning a bunch of centuries
ago, a young sailor by the name of Hansel Nycroft was combing
the beach and happened upon a beautiful mermaid. The tide
had receded and left her stranded on the sand, trembling at the
sight of the rising sun as exposure to it’d mean her death for
sure. The young sailor gazed in amazement. At the same time,
he thought about the fortune the discovery’d bring him. He
imagined himself in top hat and tails, drawing aside a velvet
curtain to reveal his giant saltwater tank. He imagined the gasps
of carnival crowds the world over.
As if reading his thoughts, the mermaid said, “Kind sailor,
if you help me back into the waves, I shall grant you any wish.”
Nycroft reckoned that it’d be wrong to turn the poor
creature into a freak show. Also, he hated getting dressed up.
“I want to build ships,” he told her, “that will be fast, that will
never sink, and from which no man shall ever be lost.”
“Then so shall it be,” the mermaid said.
Nycroft knelt down, gently picked her up, and carried her
to the water’s edge. He never saw her again. Not even his closest
friends believed he’d seen her in the first place. But he did
become a shipwright, and his wares proved unflaggingly swift.
Only on a single occasion did one capsize, but she didn’t sink,
and never’d a man drown.
Generation after generation of Nycrofts carried on his
business in the Caribbean with similar success. The pirates
whose mundane fishing boat we’d captured had had the Nycrofts
replace her wood hull with an all-but-impenetrable layer of iron.
The shipwrights’d also fitted her with four monstrous, custom-
built four-thousand-horsepower aeroderivative gas turbine
“Specials”—amalgams of racing boat and jet engines with a
family-secret nitrous oxide injection system. With the Specials
in her belly, the fishing boat’s capable of forty-odd knots, which
was sufficient for the pirates to prey on all but the swiftest yachts
in the Caribbean, and more than ample for the Tortolan navy
cruiser to choke on our wake.
The problem is the deck-mounted rocket launcher the
Tortolans have got. One look at it gave me a Vietnam movie
flashback. Plus made me aware that the rocket launcher’s being
aimed at us as I write. So I’d best duck out for now. 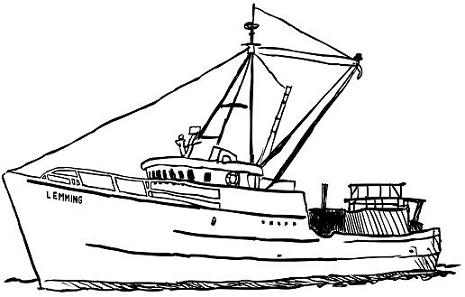 P.S. Here is Flarq’s scrimshaw of a 2004-model pirate brig, a.k.a.
our new fishing boat. Don’t judge her speed by her looks.
P.P.S. Flarq apologizes if the lines are a bit shakier than he
usually does them. But you know how it is when you’re trying to
scrim shaw during a life-or-death, high-speedboat chase.

Good and bad news. First, some of the good: We just received
a reliable report of a sighting of the bastard’s pod. Because the
Tortolan navy might be reading this, I’m gonna keep the L & L
on the QT.
Speaking of the Tortolan navy, here’s some of the bad
news: Their cruiser is chasing us right now, and she’s gotten into
firing range. That brings us to the real bad news, the details of
the sleek, rotating, high-tech gun on her bow.
“Neptune Sea-Sprite missile launcher,” Thesaurus said
gravely. “Not the sort o’ pom-pom them pirates ever expected
this brig to have to withstand.”
He handed me the telescope and pointed out the
Neptune’s twin tubes. They fire, he explained, medium-range
harpoon missiles with solid propellant rocket motors. Courtesy
of a sophisticated computer guidance system and a revolutionary
thermal sight, the operator can view and track a missile from
launch to target impact—even a monkey has a one-in-three shot.
Upon impact, a disruptor charge detonates reactive armor,
enabling the missile to penetrate just about anything less sturdy
than Mount Everest.
While Thesaurus was pointing this out, I noticed a puff
of white smoke on the Tortolans’ bow. Before me and the crew
could run or jump—or so much as react—we were deafened by
the scream of the incoming missile, then belted to the deck by its
current. It flew about ten feet above us, fortunately, then cracked
the water a hundred yards away. Puzzling though. Even a monkey
would be let go for missing by so much.
“George, do you have a relative in the Tortolan navy?”
Nelson asked.
Before George could remember, the missile struck the
sea bottom and exploded with force enough to rattle our brig
so hard it seemed she’d split. Good news: That iron hull the
Nycroft shipwrights had put on held tough, and there were
no casualties, save maybe a few unlucky fish (which no doubt
Mutherford will pin on me).
More good news: “While you were in court, Cap,” Duq
told me, “we find floating mine stow below deck. We drop it
over side as we leave harbor.”
He pointed at the Tortolan cruiser. As the smoke from
the missile cleared, I could make out that she was dropping
below the waterline. Fast. The mine had done its job on her hull,
which accounted for why her missile had missed us by so much.
And meant she wouldn’t be firing any more missiles.
More bad news: The Tortolan navy’s got more brigs. And I
highly doubt they’ll be taking today’s mining as all in good sport.
P.S. “Theirs” by Flarq (scrimshaw on
salad plate). 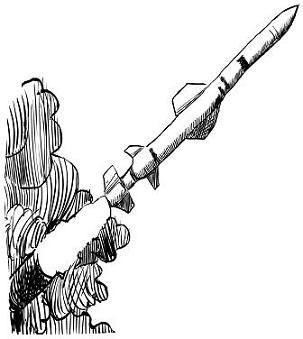 P.P.S. Here’s another scrimshaw of the rat we found aboard the
fishing boat who the crew and me voted six to one to keep as
a pet. His name is Bob, short for the name the lone dissenter,
Duq, originally gave him (Shishkabob). 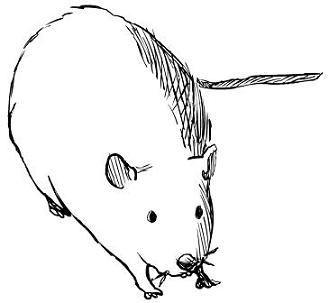 Who knew the little island of Tortola had enough citizens on it
to even have a navy? Till a week ago, I only knew of Tortola as
something they serve up at Italian restaurants.
Right now, two Tortolan navy brigs the size of skyscrapers
on end are coming at us from either side. Plus the Tortolan
air force is in on the round-up. Their air force is just a couple
of open-cockpit deals left over from World War II. But even a
chimp could drop a bomb from one of those things and instantly
“install a swimming pool on our deck,” as Nelson put it. This
wouldn’t be the case if we could shoot them first. Unfortunately,
the pirates we got the Lemming from were board-with-a-dagger-
between-their-teeth types, as opposed to blast-their-enemy-with-
cannons-first types. In other words, we don’t got squat in the way
of weaponry aboard.
I know, I know, you’re thinking: Openshaw, when you’re
lucky enough to get a free boat, you shouldn’t be a whiner if it
doesn’t come with all the amenities you want. Ironically, we’d
been planning to stop off today at an arms dealer Nelson knows
to do some shopping for exactly that kind of stuff.
I don’t want to say things are desperate now, but I’m going
to go see if Stupid George has any ideas.
P.S. Here’s a quick scrimshaw by Flarq of Duq checking out the
Tortolans’ line-up. 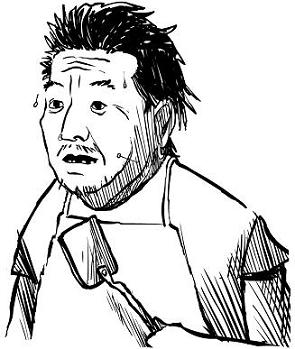 The following story was on the front page of the Tortolan Daily
Ahoy on Thursday, July 15th:

MONTEGO BAY, JAMAICA—Late yesterday afternoon, amid
high seas, the Tortolan naval cruisers Vengeance and Thunder
converged on the 64-foot fisherman Lemming, piloted by the
outlaw Gus Openshaw, at 18° 32’N/ 78° 04’ W.
When the Lemming ignored the navy’s orders to be boarded as
well as a warning shot across her bow, the naval cruisers fired
two torpedoes apiece into her portside hull, creating “loud
explosions followed by pillars of water of biblical proportions,”
according to one onlooker.
Within five minutes, the 110-ton fisherman had disappeared
beneath the surface of the Caribbean. Neither Openshaw nor his
crew were seen. According to Thunder Commander Geraldo V.
Vegtalla, all of them are believed dead.
Sorry to any Ahoy subscribers among you whose hankies
got dampened from reading this on Thursday. I appreciate the
sentiment. Hopefully you’ll agree it was for the best overall
that we didn’t ring up the news desk for a correction. What
happened was this: It was easy for the Tortolan navy to find and
sink our brig, the Lemming. One reason for that was we’d posted
a scrimshaw of her on this very blog. Another is I posted stuff
that indicated where she was headed and that me and my crew
were aboard her.
Thing is, we’d gotten off the Lemming late last week, a
league or so north of Montego Bay, then set her adrift. That’s
why (like the news article said) the Tortolans got no response
when they asked to board her, fired a warning shot across her
bow, etc. By then, the crew and me were safely away.
Now we’re bastardbound in a brand new brig—I’m gonna
keep the details on her on the QT, except she’s so luxurious
(I splurged) that the crew’s been calling her Heaven. (I’m still
looking for a cooler name. A lot of folks wrote in last time we got
us a new brig suggesting the name Pequod II, which I don’t get
at all. The Pequods are some small Indian tribe in Connecticut.
Best I can figure is these Pequods are the ones writing me and
are just looking for free advertising for their casino.)
We’re now en route to a secret arms dealer Nelson knows
to splurge some more on guns, rockets, and whatever else we
can get as we are expecting more trouble, and from all comers.
The reason: Admiral Ricardo Vurman of the Tortolan navy,
pretty fumed about the faceful of egg he got from us, has put a
price of $20,000 on my head. Nelson promptly responded by
putting a price of $100,000 on Admiral Vurman’s head. (Nelson
later informed me that if this gets results, he’ll have to borrow
$100,000 from me.) 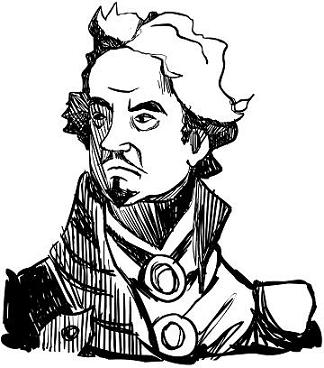 P.S. Not that I’m suggesting it’d pay for you to drop what you’re
doing and go hunting for Admiral Vurman, but if you do, here’s
a scrimshaw of him which might come in handy.