Her heart swelled. "You mean that?"

He nodded, his blue eyes gazing into hers.

"Will probably hates me."

"He'll get over it. I'm sorry I didn't see him pushing
you around like he was."

She shrugged. "I can hold my own, Brock, if you
haven't noticed. And Will was just looking out for his
interests."

"And I'm looking out for mine. So what do you say?
Do you really want to chain yourself to Nashville?"

She wrapped her arms around his shoulders. "I'd
rather chain myself to you, Brock Gentry."

He raised both eyebrows with interest. "I like that
idea. Say you'll marry me, Josie."

Shocked at his sudden proposal, she pulled away and
stared at him, but he just held on tighter to keep her
from fleeing.

"If you're still stuck on marrying a blue suit man, I'll
buy that blue suit and wear it just for you. As long as
you're with me, I don't care what I'm wearing."

She kissed his lips with a promise in her heart that
what she'd been looking for all her life was what she
had in her arms at that very moment. "Forget the blue
suit. I love you just the way you are."

He cocked his head to one side. "What was that?"

"That thing you just said."

She smiled, her whole heart and soul bursting. "I
love you, Brock Gentry."

He nuzzled her neck with a kiss. "I was wondering
when you were going to get around to saying those
words to me."

"I love you. I'll say it as many times as you want me
to for the rest of our lives."

"Thank you, God," he said. "And just for the record,
I'm a man who likes coming home to the same woman
each and every night. I don't care where we make
home, I just know that's where I'll be if I've got you in
my arms. There will always be women at every gig,
pulling at me. Is that something you can handle?"

"Don't put your feelings in a song, Brock. Just tell
me what's in your heart. Just like this. I want to know
it and feel it from you. Do you love me?"

"You'd better believe it, lady. More than life itself."

Blue suit be damned. "Then that's enough for me." 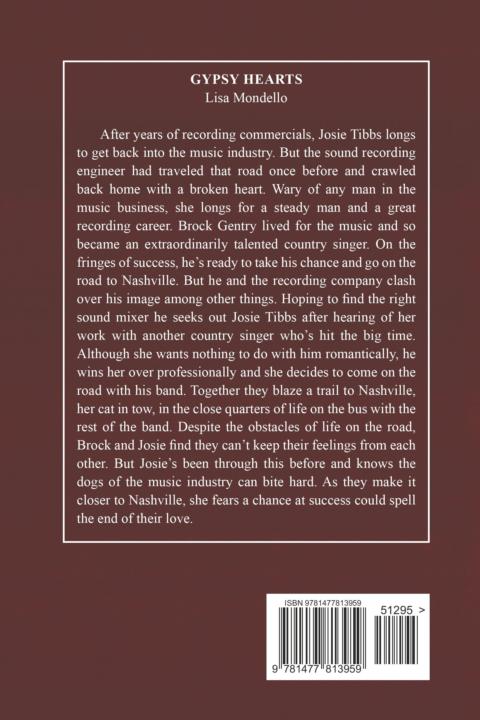 Explosive (The Black Opals) by St. Claire, Tori
You're Not You by Michelle Wildgen
PUCK (A BAD BOY HOCKEY ROMANCE) by Marx, Jessica
The Third Throne: Angel of Darkness by Tabitha Barret
Stagefright by Carole Wilkinson
The Empire’s Corps: Book 01 - The Empire's Corps by Christopher Nuttall
Allegiance by Shawn Chesser
Temptation in Shadows by Gena Showalter
The Darkest Walk of Crime by Malcolm Archibald
How to Steal a Dog by Barbara O'Connor
Our partner