Mimi's surprise turned to delight as she saw her friend up and on his feet. “Hamish X!” She smiled and held out her arms. Then she saw there was something wrong. He was sweating profusely. His eyes darted from side to side. He stood at the top of the ramp, his chest heaving and his eyes filled with panic. When she said his name, he stared at her as if she were some sort of monster.

“YOU! WHO ARE YOU? WHERE'S MY MOTHER?” His eyes narrowed. “Are you one of them?”

“She is an enemy, Hamish X,” the voice said.

“Yes!” Hamish X hissed. He lunged at her, swiping the heavy book like a club.

Mimi reacted instinctively, diving to one side while grabbing Parveen's shirttail and yanking him along with her. They fell off the ramp onto the wet grass. Parveen grunted as the air left his lungs.

Hamish X leapt down the ramp and landed in the grass. His boots sizzled and steamed. “I WANT my MOTHER!” he roared and the boots flared, casting a blue light in a circle several metres across.

The light revealed the meadow around the airship, the looming gasbag above, and a few terrified, vomiting rabbits. All to be expected. What wasn't to be expected was a group of six figures dressed in dark, tight-fitting bodysuits, black goggles, and balaclavas.
21
They stood
frozen in the glare, caught in stealthy poses that would certainly have been effective in the darkness but in the bright blue light seemed superfluous, if not completely ridiculous.

“Who are they?” Mimi whispered, huddled beside Parveen in the grass.

“We come from the King of Switzerland!” the black figure in front called out. He, for indeed he was a boy, reached up and pulled off his balaclava, revealing a pale face and straight blond hair. “We've come for Hamish X!”

The strange figures faced Hamish X in a loose semicircle. They were all dressed in the same black uniform. On the right breast of their bodysuits was a silver cross embroidered into the fabric. Each wore a heavy belt with small pouches on it, a coil of rope, and a bulky black holster holding a bulky black pistol. Their leader, the blond boy, took a step towards Hamish X, his hands held out before him, palms upward.

“I have come from the King, We mean you no harm.”

“Yes,” the boy said, “I am Aidan, Lieutenant to His Majesty and Commander of the Royal Swiss Guards. We've come to escort you to his presence.”

For a moment, nobody moved. Even Hamish X, rampaging seconds before, stood frozen and dumb, staring at the strange boy and his masked cohorts. The only sound was a rabbit vomiting softly in the still night. Hamish X's boots dimmed slightly, the blue light casting an eerie glow over the newcomers.

The blond boy took a step closer to Hamish X, his hand extended. “Let's just settle down here,” he said soothingly. I promise we are here to help.”

Hamish X said nothing, his eyes flicking back and forth between the boy and the black figures ranged behind him. “Who are you?”

“As I said, I'm Aidan. This is my Guard Squadron.” He indicated the silent group behind him. “We've come to take you to the King.”

Suddenly, in his head, the Voice was there, urgent and insistent.
“NO! HE IS THE ENEMY. HE WANTS TO HURT YOU!”

The Voice was like a shout in his mind. He jerked his head in reaction to the ferocity of its tone. “What? Why?” He staggered a step forward.

“CRUSH HIM! CRUSH THEM ALL!”

Hamish X's face darkened. He glared at Aidan and snarled like a wild animal. “You want to hurt me!”

“No, I want to â¦” Aidan didn't have time to finish. Hamish X sprang at him, catching the boy off guard and driving his boot into his chest. Aidan flew across the meadow, sliding on the slick grass and bouncing like a
stone skipping on a pond. When he stopped sliding, he lay on his back, groaning. 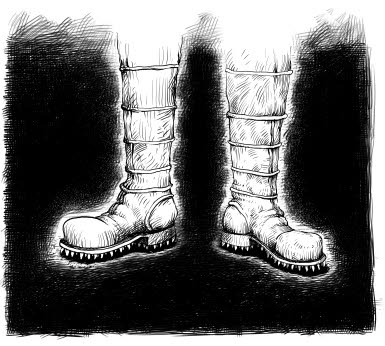 One of the strangers pulled off her balaclava to reveal dark, shoulder-length hair. She hauled her pistol out of her holster. “Nobody kicks my brother.” She thumbed a switch and the pistol hummed to life. She pointed the pistol at Hamish X. It had a wide barrel like the mouth of a small cannon. “Stun him!” The others drew their pistols even as she fired.

“No!” Parveen cried as he flung himself in the path of the green bolt of energy erupting from the pistol. The bolt struck him squarely in the chest. He fell in a boneless heap on the ground.

Mimi rushed over and dropped to her knees at her stricken friend's side. “Parveen? Are you all right?” She turned her friend's face up. His glasses hung from one ear. His eyes were closed and he was breathing.

Hamish X stood looking down at Mimi and Parveen. His chest heaved. His eyes were wide. “He â¦ He tried to save me.”

Mimi looked up at him, tears streaking her face. “Of course he did. He's your friend.”

“Friend â¦” Hamish X's face was a picture of confusion. “He's my friend?”

The girl and the other Guards held their pistols ready, aimed at Hamish X.

“Yes. They are out to get you. They have pistols. They want
to shoot you. Crush them.”

Hamish X shook his head. He looked at Mimi, cradling Parveen's head in her lap. “No. They're my friends â¦”

Mimi was beginning to think Hamish X was going to be okay. Then his eyes clouded and his mouth drew back into a snarl. Teeth bared, he raised his boot. It flared with blue energy as he prepared to bring it down on her. He didn't get a chance.

“Fire!” the girl from the Swiss Guards ordered. All the Guards discharged their pistols. The green bolts struck Hamish X in the chest, the legs, and the right arm. He roared in pain and staggered backwards, dropping the book on the ground and falling heavily onto his backside. The air burst out of his lungs with a loud
Whuff!
He sat blinking like an owl.

“Mother?” he mumbled thickly and tried to rise again, crawling on his hands and knees towards the book lying in the grass. “Mother?”

“Fire!” the girl shouted again. Once more, green bolts splashed into Hamish X. He groaned loudly and made one more effort to push himself upright on shaking arms, but failed, slumping to the wet grass and, finally, lying still.

“Oh dear!” Mrs. Francis and Mr. Kipling rushed down the ramp, having arrived just in time to see Hamish X being stunned for the second time. Mrs. Francis gathered the inert boy into her arms, rocking him gently. Mr. Kipling came to where Mimi held Parveen and scooped up the little boy easily. Mimi went to look down at Hamish X. Aidan, walking carefully beside the other girl, came to join her.

“That could have gone better,” Aidan said. He held out a hand to Mimi. “Now that the excitement's over, I'll
introduce myself once again. Lieutenant Aidan of the Royal Swiss Guards.”

Mimi ignored him and stepped up to face the dark-haired girl. “Who're you?”

The two girls stood toe to toe, staring into each other's eyes. For a long span of seconds, neither blinked. Finally, Cara sniffed and flicked her hair back over her shoulder. “Whatever.” She turned away and went to join the other Guards, who had removed their masks and stood in a loose knot a few metres away.

Aidan shook his head. “This isn't the way the King would have wanted it. I'm sorry. We didn't expect this reaction from Hamish X.”

Mimi nodded, sizing the boy up. “Yeah. He ain't been himself lately. It don't help, you folks sneakin' up like that.”

“Sorry. We can't take any chances. We had to make sure you were really bringing Hamish X, and not just part of a trap set by the ODA.”

“Are ya satisfied that we ain't?”

“Yes. But we're wasting time. We have to get out of here.”

“To the Hollow Mountain, of course.”

Mrs. Francis let out a gasp as Hamish X's eyes suddenly flew open. He leapt to his feet and stared wildly around.

“I'm not going anywhere! I've got to find my Mother! MOTHER!”

Cara and the Guards reached for their pistols, but Hamish X was too quick. He lunged at Aidan and grabbed the front of his black bodysuit, lifting him into the air. “You can't stop me!”

Mimi battered Hamish X's arm with both her fists but couldn't break his grip. “Hamish X! Stop it!”

“Mother. I â¦ You â¦” Hamish X's eyes suddenly rolled back into his head. He dropped Aidan, who fell to his knees.

“Mother?” Hamish X whimpered, then fell face first onto the grass. Mimi and Parveen rushed to his side, followed closely by Mr. Kipling and Mrs. Francis, with Aidan and the girl bringing up the rear.

Two small silver filaments had penetrated the skin of the stricken boy's neck just above the collar of his flannel shirt. As they watched, the filaments withdrew. With a soft rustling sound, the Swiss Army knife crawled out of Hamish X's shirt, its many blades functioning again as legs. It climbed down onto the grass, and with a click, all its blades withdrew into its body and it lay still.

“The King.” Aidan smiled, rubbing his bruised chest. “He thinks of everything.”

Mr. Sweet and Mr. Candy sat at the kitchen table in the little house on Angell Street in Providence, Rhode Island. Mr. Candy's hat lay on the table while Mr. Sweet fiddled with the wires at the top of Mr. Candy's head. Mr. Sweet prodded the nest of colourful wires with a long steel pin. Every now and then the rod crackled at the end and smoke curled up in thin tendrils. The reek of burning plastic filled the small kitchen.

“That's better,” Mr. Candy said, flexing his long fingers. “I was experiencing some difficulty manipulating my digits after the refit.”

“I'm glad to accommodate you, Mr. Candy.” Mr. Sweet laid down his instrument on a cloth beside a number of other bizarre implements whose purposes one could only guess at. As he did so a chime rang out, soft and sweet, seeming to throb in the air and coming from no particular source.

“The unit has been located.” Mother's voice filled the kitchen.

Over the centre of the table an image of a spinning globe flickered into existence. The globe stopped spinning and a
blue dot blinked in a mountainous region in Central Europe.

“There!” Mr. Sweet's overlong finger stabbed out at the glowing map.

“Switzerland?” Mr. Candy said, baffled. “How could they have travelled so far without being seen?”

“It doesn't matter. We have them now. Mother?”

“Prepare an assault team. We leave within the hour.”

“It doesn't matter. We have a lead now. We go to Switzerland. We know where he is. Now we retrieve Hamish X.”

THE KING OF THE HOLLOW MOUNTAIN