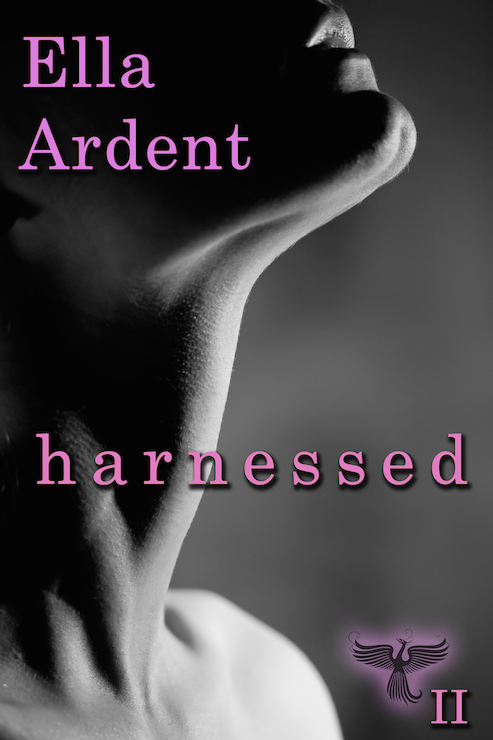 In The Phoenix Series

Josh is a successful musician who has lost his ability to compose. In search of the music he used to hear, he decides to be a human pony for a week at the Phoenix’s new private island, Windswept. His hope is that the captivity and routine, as well as being inaccessible to others, will still the chaos of his thoughts. He’s not expecting to find the experience so rich and satisfying, much less to find his muse in Elise, a woman just as determined as he to explore her own fantasies—no matter what the cost.

Without limiting the rights under copyright preserved above, no part of this book may be reproduced, stored in or introduced into a retrieval system, or transmitted, in any form, or by any means, (electronic, mechanical, photocopying, recording, or otherwise), without the prior written permission of both the copyright holder and the publisher of this book.

Josh travelled even more lightly than usual. He carried only his messenger bag with a clean T-shirt and underwear. In the past, simplicity had brought back the music. It hadn’t worked so far this time, but that only made him more determined to pare down his life. He’d shut off his phone at Heathrow but stifled the urge to chuck it out. It was a silent weight in the bottom of his bag, and he wouldn’t think about the inevitable deluge when he turned it on.

He’d left the band at the end of their last tour, unable and unwilling to keep up the frantic pace if he couldn’t compose. His sister knew he was taking a vacation. No one needed to know more.

After all the years in the spotlight, Josh wanted nothing more than to be invisible. Maybe disappear. Maybe then, he’d hear new melodies in his dreams again. Without the music, he couldn’t see the point of any of it.

He stood outside the small terminal building at the helipad, appreciating the feel of the wind in his hair and the sunlight on his face. That was a simple pleasure. His next week would probably be full of the pleasures of the flesh, with no demands upon his mind. In fact, he wouldn’t even be in control. Beyond having a safe word to use in emergencies, he’d be completely at the whim of others.

He liked to dominate. He could have guessed that, as he was used to making decisions and shaping his own career. He was open to experimentation, again something he could have guessed, given his choice of career. But he’d never realized how much he loved the eye candy of bondage, much less the feel of restraint. He’d looked at the images of Windswept initially imagining himself as lord of the manor—maybe everyone did. Then he’d read about the human ponies, the training and the harnessing. That made him remember the serenity of the horses on the farm his sister ran with her husband.

It was a serenity Josh wanted more than anything in the world.

Standing on the tarmac, Josh had that steady pulse in the base of his cock, the throb he always got in anticipation of a really hot scene.

This one would be completely new and different for him, and it would last a whole week.

It was hard to imagine being that deep into a role, never mind of having no escape. It would be relentless and thrilling—especially if he really was powerless. He swallowed hard, just thinking about it.

Helpless. The word itself bent something in his mind. Josh wasn’t a small guy and he worked out a lot. He was always in control, always able to dominate, always running the show. But he’d seen time and again how exciting his partners found surrender and capitulation. There was no question of submitting to anyone who couldn’t control him and guarantee his safety, so it had to be the private club called The Phoenix.

There had to be no escape. There had to be a lot of leather. He had to be outnumbered. He didn’t need the brochure for Windswept anymore: he had its contents memorized. Only the people who ran the Phoenix would think of buying a private island and outfitting it as a Victorian-influenced BDSM fantasy playground. The helicopter came once a week and only touched down for moments. The island was surrounded by the North Atlantic and miles from the British coast. The pictures showed the island was windswept and rocky, graced by a single towering manor house, with its stables and sculleries. Cliffs dropped to a rocky shore beneath the house.

Although it looked like a mansion out of a gothic novel, Josh had no doubt it had been purpose-built by the Phoenix, and was riddled with secret passages. There’d be extra insulation to muffle cries of ecstasy, rings embedded in the walls, closets sized to hold trussed and gagged slaves, and probably a dungeon. The house was actually less interesting to Josh than one of its outbuildings.

He wanted to pace back and forth, but schooled himself to stand perfectly still. This was what he’d have to do in the role: be biddable, calm, captive. Horses stood where they were tethered. He tried to empty his mind, think like a horse, accept sensation and not worry about anything else.

Josh heard the chop of the helicopter’s blades before he saw it. It was a large silver helicopter, an executive aircraft that shone in the sunlight and whipped up the wind as it descended. He’d already noticed the long black limousine parked on the far side of the terminal, as well as the chauffeur with mirrored sunglasses and dark hair who waited alongside the passenger door. One of the ground crew opened the door of the helicopter as soon as it touched down, and a beautiful woman with auburn hair smiled as she accepted assistance in stepping down to the ground.

With a glance, Josh knew she had to have come from Windswept.

She was wearing black high leather boots, boots with stiletto heels and pointed toes that practically said “fetish” from cuff to sole. Her short skirt blew in the wind, but the top of the boots was never revealed. They had to go halfway up her thighs. They also fit snugly, revealing that she had great legs. She wore a red raincoat and a long silk scarf that blew in the wind from the aircraft, mirrored sunglasses and black leather gloves. Her lips were crimson and glistening wet. She smiled at Josh and he felt her assessment as she looked him up and down. He had a vague sense he’d seen her before, maybe at The Plume.

“You would be Josh?” she asked in a murmur, lifting her glasses a little to reveal her eyes.

Josh nodded and made a guess. “You must be one of the partners. Athena?”

She offered her hand, and her grip was surprisingly strong. “You’re one of the first in your area,” she said softly, her gaze locking with his. There were a thousand secrets in those eyes, give or take, and Josh felt himself get harder.

Never mind that she was eying him like he’d make a tasty snack.

In a scene, which of them would dominate the other?

“I’m particularly proud of the arrangements there and would love to know what you think, after your vacation is completed, of course.” She handed him a card that had only an email address on it.

Josh smiled, recognizing that she was ensuring he could reach her again. Maybe he wasn’t the only one who was curious. “I’ll be sure to let you know, Athena.” He smiled into her eyes. “I’m really looking forward to this.”

“Good. We’ve talked about adding a time share option, for more regular visits. Let me know if that’s of interest.”

She smiled again, then strode away, both feminine and purposeful. The chauffeur swept open the door to the limo and she pecked his cheek before taking a call on her cell phone.

He turned to watch the pair of pilots do their safety checks of the helicopter. They were flirting with each other as if they did it all the time. He wondered if it was all a tease, or if it was just part of the job. He wondered if they did each other, and if so, who was on top. The woman was blonde and tall, beautiful and strong. The guy had the look of a bronzed god. Josh would have liked to have trussed them both up and taken them together. His cock stirred as he imagined the scene, but his own fantasy trumped it.

Harnessed and helpless. It would either destroy him or restore him.

How many more were they waiting for? A cab pulled on to the tarmac and drove directly toward the helicopter. Josh could see a couple inside, the guy with classic surfer good looks, the woman darker and quieter. She was elegant and petite. He noticed that as soon as she got out of the car.

They had to be together, but the guy didn’t open her door or offer his hand. He leapt out to get the bags, leaving her to pay the fare. When she got out, he handed her bag to her, and strode toward the helicopter himself.

The bag couldn’t have been heavy, but Josh didn’t like the gesture. Maybe he was old-fashioned but he much preferred the way the chauffeur treated Athena. In his experience, even if the woman was a submissive, it was a huge turn-on for the man to act like a gentleman in public, doing a thousand little services for her before possessing her as his own. The newly arrived guy was clearly in a hurry to get to the helicopter, the woman more cautious.

His fantasy or hers?

For some reason, Josh thought of the last clause in the contract he’d signed.

The Phoenix reserves the right to combine individual fantasies of multiple guests as it sees fit, and is not responsible for any unforetold interaction between fantasies during your scheduled visit.

That clause haunted him. It awakened him at night, flitting through his thoughts as he tried to go back to sleep. It tempted him with possibilities and unpredictable scenarios. The idea that everything wasn’t planned out to the last detail both excited and terrified him as little else could have done. He was used to controlling every single detail, but could only define his fantasy in broad strokes for this adventure. That the club was so upfront about unforeseen developments and possibilities had practically given him wet dreams.

He would be out of control.

At the mercy of others.

And the smartest thing would be to empty his mind of all concerns and embrace his situation.

After all, he’d paid for it.

He had a funny feeling when he watched the couple head for the helicopter one of them was going to get a surprise, too.

Josh knew which one he’d choose to disappoint. The guy had it coming.

Maybe the good people at The Phoenix thought so, too.