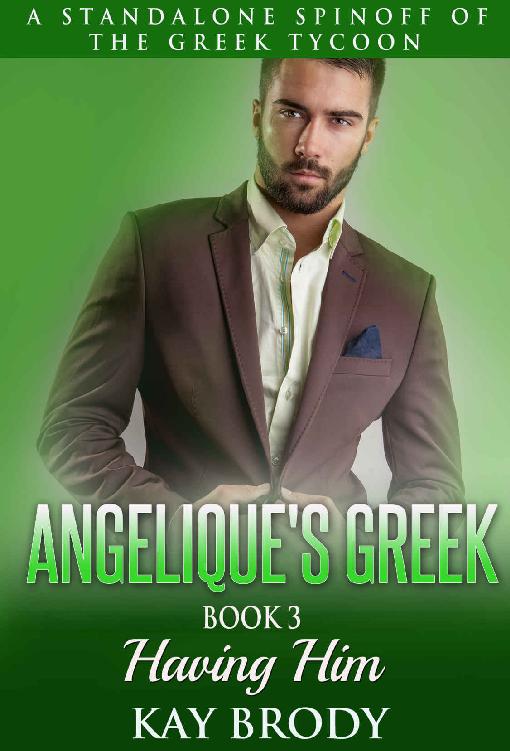 A Note From Kay Brody

A Standalone Spinoff of The Greek Tycoon

Having Him Copyright © 2016 Kay Brody

All Rights Reserved. No part of this work may be reproduced in any manner or used in any way without advanced written permission by the author.

as a
Thank You
for reading my story!

This book is for John.

You’re still the only one to make me swoon.

“This land is not for sale,” said the angry man holding the cutlass.

“Then why was Kalani showing it to us? He must have had permission from the owner.” Angelique said surprising even herself with her defiance; the men standing in front of her were intimidating for sure.

“He did
not
have permission from the owner,” the man said, his eyes bulging and a vein throbbing in his neck. “Because I
am
the owner.”

Theo had his hands in his pockets, looking calm and collected.

“I’m a lawyer,” he shrugged. “Maybe I could take a look at the land papers and sort this all out.”

“I think that’s our cue, babe,” he said leading her away slowly.

She was glad Theo didn’t make a big scene and start a fight on one hand, but she was disappointed that they gave in so easily. This would have been the perfect place for the hotel.

But, the man
was
holding a cutlass…

She smiled at Theo, though she felt like crying, as they tramped back through the tropical bush to their rental Jeep.

“If you come back, I’ll kill you,” the man hollered from behind them. He sounded like he meant it.

“Yeah!” another shouted. “Don’t you ever come back here, little boy!”

She felt Theo’s hand tighten around hers, but he stared straight ahead, his eyes alive with an energy he was trying to hold back.

“Pathetic little boy,” the man said, then laughed raucously, his laugh scratchy and heavy, like he’d just smoked an entire pack of cigarettes.

Theo paused and turned to them.

“We are going peacefully,” he said. “There’s no need to insult me.”

“He was telling you what to do,” another shouted.

Angelique glanced back as they continued walking. She saw the man swaggering up behind them, his cutlass held in front of him.

Theo turned around to see the man gaining on them.

“Come on!” he hollered, pulling on Angelique’s hand. They dashed through the thick bush, slapping vines out of the way and tripping over their flip flops.

Angelique turned to look and screamed.

Immediately, she saw a fresh gash on his bicep weeping blood down his arms.

“How dare you! What is wrong with you?” Angelique shouted before she could stop herself.

“I would watch your mouth, little lady,” the man said. “I’d hate to have to hurt such a pretty little thing.”

Angelique helped Theo up and they sprinted to the Jeep at lightning speed.

“I’ll drive,” she said, grabbing the keys from his hand and looking back.

The man stood a little way back, his cutlass raised. “And never come back!”

Angelique’s hands shook so much that it was a struggle to put the key in the ignition, but eventually she managed it.

She was so angry; this was not how this was supposed to happen! She couldn’t believe that they had just been attacked by some crazy man. This stuff doesn’t happen in real life!

More than anything, though, Angelique was sad. She felt her dreams for the spa, for the future were slipping away.

“I’m driving you to the emergency room,” she told Theo. “We should probably call the police, too.”

“No way, babe. I’m fine and there is no need to get the police involved. I’d rather not have to see that crazy bastard again.”

She flipped the car into gear and took off, speeding over the bumpy terrain.

Theo tended to his wound with a spare T-shirt he found in the back seat. He winced as he pressed it against the raw flesh.

She glanced at him and scrunched up her face. “This is all my fault. I’m sorry.”

“Don’t talk like that,” he spoke calmly to her. “Whenever you have a bold vision there’s always stuff that gets in the way, stuff will go wrong. I always say the more things that go wrong, the more I know I’m on the right track. This is just one of those wrong things.”

“I don’t know, Theo,” she said as she swung the car off the dirt track and onto the main road. “I’m losing my enthusiasm for this whole thing.”

It was still strange, hearing the words come from her lips. She’d never gone so fast with a man, sleeping together and declaring their love after only a few days. She was still running off adrenaline, but she didn’t care.

“You don’t sound so sure,” Theo joked with her.

“I am. It is all happening so fast though. And now I am taking you to the ER! This is craziness.”

Theo laughed and Angelique immediately felt her anxiety melt away.

“It’s this spa hotel. I mean, what do I know about starting a hotel, really? I’m just a masseuse,” she said, only half joking.

“What do I know about writing a book? Nothing, but I’m doing it. What did a boy from the slums of Perama know about hedge funds? Nothing, but I did it. Everyone starts out knowing nothing, that’s normal. You learn as you go.”

“Well that’s different,” he said. “Maybe you should give it some time and see how you feel in a day or two. We will need to find another place anyway. That one is clearly not an option anymore!”

She knew he was right but she couldn’t help feeling defeated. It wasn’t like her to give up so easily though. She had a nagging feeling that it was something more than this temporary setback that was causing her to feel sad.

“You’re right. You always keep a level head and I love that about you. Thank you,” she said touching his leg.

“No. Thank you. Your spirit and enthusiasm is special and I love being around them … and you.”

She draped her arm over the steering wheel and kept a look out for directions to the hospital. “I just want to make sure you’re okay.”

“What, this?” he said, gesturing at the wound. “This is nothing. Did you forget where I came from? Let’s go back to the hotel and forget this ever happened.”

“I still need to read your book,” Angelique said as she helped Theo finish dressing his wound. He’d adamantly refused to go to the hospital, saying the wound was merely superficial. She probably should have argued more but she didn’t have the energy, so she’d driven directly back to the hotel.

“Please,” he said. “I never knew a memoir could be so gut-wrenching to write, but as I go through it I can feel … myself coming into place. Do you get what I mean?”

“I think so.” She said distractedly. Her disappointment about the spa was really nagging at her.

Theo seemed to read her mind. “Maybe we’re looking in the wrong place,” he said.

“The hotel. Why not start the hotel at home, where you feel more comfortable?”

“I don’t know.” She didn’t know. She should have looked there first, she thought. “I thought maybe I should see the world? I’m not sure, Theo, honestly.”

“The world is a book, and those who do not travel read only one page,” he said. “Saint Augustine said that. I kind of agree. Traveling is great, everyone should do it, but there’s no place like home. Sometimes you have to leave it before you appreciate it, though.”

“Right,” said Angelique. He was right. She missed home—she missed sitting on the verandah swing seat with a Switcha lemonade and a guava duff, and the gentle breezes that refreshed her black skin and carried the sweet flower aromas. She missed her mother. She missed their garden that bloomed in vibrant arrays of marguerite and bougainvillea. And the banana and plantain trees that lined the perimeter of their home.

“I’d have thought Hawaii looked a lot like the Bahamas,” he said.

“It does. But it feels different.”

“I know exactly what you mean. There’s an area like Perama near my home in Psychiko but it’s not quite the same. Sometimes I just tell my driver to take the afternoon off and I take a spin down to Perama, trying to work out where I grew up. Our shacks all fell apart and people have built new ones. It’s just as bad as it was before—worse, even.”

“Doesn’t it feel depressing to go back?”

“Not at all,” he said. “I get … contemplative, maybe, but mostly grateful. I was able to get out, to carve a good life. Other people weren’t so lucky.”

They settled into a silence and she tried not to feel like everything was going wrong for her. She looked over at him, to see his soft face turned up toward the sun. He was smiling as if he hadn’t a single care in the world.

She tried to mimic him. She lay her head back on the lounger and looked up to the sky. She tossed her hundreds of tiny braids behind her dark shoulders and tried to enjoy the sensation of the sun warming her skin. It helped a little.

Still the uneasy feeling plagued her as they sat silently on the balcony. She thought about what Theo had said about home and she felt, suddenly, very homesick.

The Diamond Secret by Ruth Wind
Fervor by Silver, Jordan
Bad Blood by S. J. Rozan
Bug Out! Part 4: Mortars and Motorhomes by Robert Boren
Destiny Calling by Maureen L. Bonatch
The Seduction of Lady X by London, Julia
Reeve (The Phoenix Boys #3) by Amy Davies
We're Working On It by Richard Norway
Preacher by William W. Johnstone
Party of One by Michael Harris
Our partner