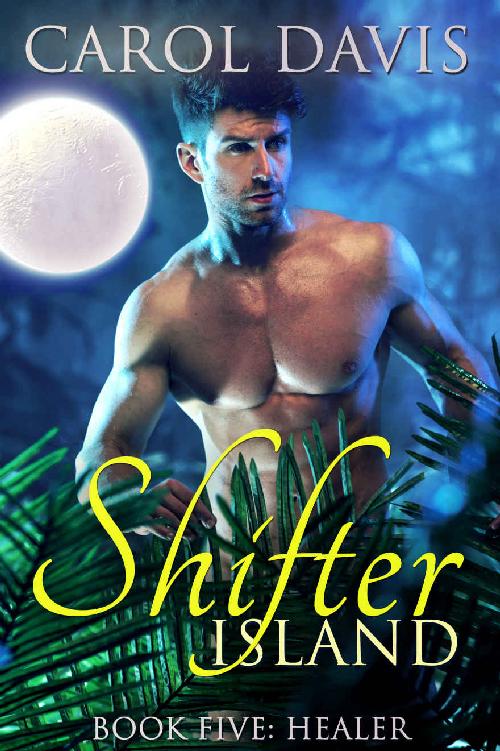 “May your troubles be few today, friend.”

One after another, Deborah’s packmates greeted her cheerfully as she walked along the narrow streets of the settlement—all of them grateful to see her well and happy after the sudden late summer storm the night before. Of course, their well-wishes extended to everyone in the pack, not just her, but she was especially important to them.

She was their caregiver, one of the wise ones, the one they turned to when they were sick or injured, or simply needed someone to listen to a problem and offer some solutions. It was a demanding job—not a single one of the wolves was unaware of that—and although Deborah was still some seventeen months away from turning forty, she was as revered as any of the elders.

She took pains never to mention that in front of the elders, though. Particularly not in front of Caleb, their alpha, whose sense of humor was unreliable at best.

The storm had left quite a bit of damage behind, she noticed as she made her way to the gardens, a wide ribbon of flat land tucked into the corner of the settlement that got the most sunlight. A number of tree branches had come down, some of them rather large, some roof shingles were missing, and the beautiful flower bed in front of Alliyah’s house was all but flattened.

When she noticed a broken windowpane on the front of Adam and Elsa’s house, she frowned. She’d heard just the other day that there was no more glass left in the storehouse, so the wolves in charge of bringing goods from the mainland would have to secure some more.

Still, the damage was insignificant, all things considered. She was sure no one had been injured during the storm; if they had been, someone would have come to fetch her right away.

There, beaming up at her, was Timothy, one of her favorites of the pack’s fifteen children. The pale-haired six-year-old was somewhat timid for a wolf, and often hung back when the other children clustered around someone who had treats to offer, or a new toy. He was sweet, though: friendly and thoughtful, and always willing to help.

Almost nothing like Deborah’s own son, Gregory, who almost overnight had gone from loud and playful to sullen and disagreeable—a young one almost no one wanted to be around any more, except for his small cluster of friends.

No; not friends, she thought. Cronies.

Gregory was an adolescent now, which was a difficult time for any wolf, but he seemed to be taking it harder than most. Everything displeased him, particularly his mother.

The thought made her sigh. In many ways, she felt like she’d lost him, even though he was very much still around.

Deborah smiled and patted the small boy’s head. “No, Timothy. I’ve just been thinking about the storm.”

His eyes grew almost comically wide. “My sister hid under the bed!” he told her in a whisper, and his hands jumped up to illustrate what he was saying. “And when the thunder crashed—did you hear it? It was
so loud
—she cried and cried.”

“Not
that
little. She’s nearly four.”

It seemed a lifetime ago that her Gregory had been that small—still anxious to find refuge in her arms during a storm. She couldn’t remember him ever hiding under the bed except in play, but he’d done plenty of frowning and a bit of trembling during the bad storms… and afterwards, he’d asked a million questions.

He seldom asked her a question any more.

But dwelling on that, especially on such a bright, calm morning, would accomplish nothing. She needed to check on her garden patch, and then walk over to see Elsbeth, who’d twisted her wrist a couple of days ago. Then she wanted to stop in and see Granny Sara, who was making colorful new curtains for Deborah’s bedroom window. Sara was nearly finished with them, and might be interested in sharing a cup of tea around mid-morning.

Far from it,
Deborah thought, but she nodded and smiled. “You’re taller each time I see you.”

The boy ran to demonstrate by leaning up against a tree. He stretched up against the bark, almost rising to his toes, then turned around and pointed out a burl that was an inch or two lower than the top of his head.

Then, before she could say anything more, he ran off into the woods. He’d seen something interesting, she supposed: a bird, a flower he’d pluck and bring back to his mother, or perhaps a snake. She might not see him again all day, or he might come running back within a couple of minutes.

Either way, she had to see to her garden patch.

A number of her packmates were in the garden already, kneeling in between the rows of vegetables, straightening and plucking leaves from plants that had been bent or broken by the wind and rain.

Marya and Annabelle were whispering together and giggling, no doubt about Nathan, who had his eye on Marya and had begun bringing her small gifts and stealing kisses when he could. That didn’t mean much; the young wolves swapped potential partners every time the wind changed, it seemed like, just as Deborah herself had done when she was their age. She remembered half a dozen boys vying for her attention over the course of a single summer. She’d found it all very exciting, and had done so much whispering and giggling that her mother had had to chide her several times for neglecting her chores.

Then, there was Victor.

Eyes as blue and bright as gemstones. Hair so blond it looked nearly white in the sunshine.

A heart so big it seemed capable of loving the entire world.

The voice startled her away from her reverie, and she quickly blinked back tears. Two or three of her packmates were looking at her oddly, and she realized that she must have made an odd sound, or that her broken heart had somehow made its way to the outside of her chest and was sitting there for all to see.

“I’m all right,” she murmured.

Suddenly, Granny Sara was there, wrapping an arm around Deborah’s waist. “I’m not surprised you didn’t sleep well,” she announced in her usual no-nonsense tone. “All that noise from the storm, and I’m sure you were awake half the night worrying about the welfare of the pack.”

She’d slept perfectly well, actually, even a bit longer than usual. She’d opened her eyes feeling as well-rested and content as a babe. As hungry as a babe, too, come to think of it.

“Let’s finish this work,” Sara suggested. “Then we’ll go have some tea and a snack. I want to show you those curtains. I thought I could trim them on the bottom with another color—I’ve got all kinds of bits and pieces of leftover fabric in the box. You can choose what you like.”

Her section of the garden hadn’t suffered much damage; only a few of the plants were bent, and none of them had broken. With Sara working alongside her, she was able to tidy her little plot in just a few minutes.

As she straightened up, her packmates began to offer the usual round of gifts: some tomatoes, a bright green cucumber, a head of cabbage. It took some doing to arrange it all in her arms, and when yet another wolf approached to give her a big, ripe melon, she wondered if she ought to bring it home by kicking it along the road.

No one paid for anything here on the island. The wolves had no money, and had no need for any. They all worked for the good of the pack, for the welfare and health of each other.

That didn’t stop her packmates from frequently showering her with extra food, articles of clothing, charming little carvings to add to her mantel, sweets, a new blanket… anything they could think of.

The children often brought her leaves and acorns and pine cones. Avram, Timothy’s older brother, had once brought her a frog.

She felt very loved among these wolves.

Remember that,
she told herself.
You’re never alone. If you need anything, all you ever have to do is ask.

Perhaps she didn’t even need to do that.

She and Sara were halfway to Sara’s cheerful little cottage when a familiar lanky form stepped out of the shadows and moved into their path. Before Deborah could stop him, he had gathered her collection of gifts into his own arms, juggling all of it as easily as if juggling had been his profession.

Tall and slim, long-legged, for many years the fastest and most agile runner of the entire pack. There was a bit of gray in his hair these days, but that wasn’t at all a sign that he was slowing down; Sara had said she thought it might be something genetic, because Jed’s father had grayed early as well.

He liked to sport a stubbly beard, unlike most of the other males. That too had some gray in it, something he liked to say made him look “distinguished.”

Every member of the pack took care of Deborah—as she did for them—but somehow, out of all of them, Jed was always there to lift and carry, whether it be an awkward pile of vegetables, an injured child… or Deborah herself.

This past spring, he’d repaired the damage the long winter had done to her roof. He’d replaced a window for her last autumn, and had patched a gap in the north-facing wall of her house so the wind couldn’t get through.

He made sure she always had enough firewood on hand when the weather was due to turn cold, and that her pantry was well-stocked.

A good friend,
she thought.

“I’ll check the house while I’m there,” he told her. “Did you notice any leaks during the rain?”

Deborah shook her head. “No, none.”

“My pleasure. A good day to you, healer. And to you, Granny.”

Then he slipped away as quickly as Timothy had—but not before he’d given Deborah a warm smile of farewell, one that made his eyes twinkle brightly.

No; it was a trick of the light, she decided; just the morning sunlight falling in a particular way.

And he smiled that way at everyone.

She turned to continue along to Sara’s cottage, only to find Sara looking at her knowingly.

Bewitching the Reclusive Billionaire Cowboy by Paige Cameron
RESTORATION (a science fiction novel) (RESTORATION (the science fiction trilogy)) by Utley, Todd
My Name Is Memory by Ann Brashares
Times Squared by Julia DeVillers
The Unruly Life of Woody Allen by Marion Meade
Pay the Piper by Jane Yolen
Snark and Stage Fright by Stephanie Wardrop
Dead Is Not an Option by Marlene Perez
The Splintered Eye (The War of Memory Cycle) by H. Anthe Davis
The Slaughter Man by Tony Parsons
Our partner