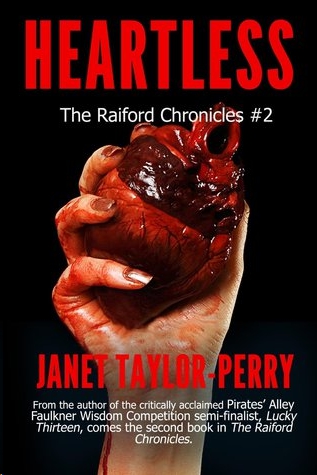 All people, places, and events in the following story are
fictitious. Any resemblance to any entity, living or dead, is
coincidence.

For Patricia, Julia, Jordan, Neely, Meghan, Alex, Kaitlyn,
Trevor, Abby, Tyler, Julianna, Courtney, Gavin, Wesley, Zach,
Cole, Brentyn, Brandon, Alicia, Lilah, Makayla, and Vicki, my
fifth-grade gifted students who brought me excitement
every
every
2009. You so filled my heart that I know I am far from
HEARTLESS.

A great many thanks to the readers of
Lucky Thirteen
who
have clamored for the second book. If you got a first edition,
hold on to it! The name of the town was misspelled Eau
Bouease should have been Eau Boueuse. The second edition
has it done correctly and it will be correct for all additional
books. So, a special thanks goes to my friend and fellow
author, Joss Landry (
Mirror Deep
), for speaking fluent French
and catching that.

I owe much appreciation to my family for putting up with
me when my eyes are glued to a computer screen and my
fingers are stuck on a keyboard.

I can never thank my editor/mentor/friend, Lottie Brent
Boggan enough. Her wonderful historical fiction saga,
Redemption Ridge
, should be available this summer.

Two groups must get a shout-out. Red Dog Writers (Lottie,
Judy, Peggy, Lydia), thank you for all the encouragement and
support; and to my TheNextBigWriter.com buds (for this
particular piece—Ann Everett, Patti Anne Hauge, Rebecca
Vaughn, Maggie Banks, aka Ceridwen on site) thanks for
keeping me honest and on my toes.

Once again, great appreciation and recognition go to
Christopher Chambers for another awesome cover design.
Interested in his work? Contact him at
[email protected]
.

Create in me a clean heart, O God; and renew a right spirit
within me.
Psalm 51:10
Contents

Thebaby wearing only a diaper, wailed with force. His
gaunt-faced mother—so thin she appeared little more than a
wraith—looked upon him with empty hazel eyes shadowed by
deep circles. Long stringy brown hair framed a face bereft of
feeling. She wore a black t-shirt with a skull on it and ragged
jeans. Body swaying, her hand rested on the bassinet. All she
wanted was some peace and quiet, but her son would not stop
crying.

Wearing a plain white t-shirt and baggy jeans, a tall, thin
man with greasy black hair pulled back in a ponytail
approached the baby and turned to the woman. "Did you
change his diaper or maybe feed him?" he growled through
clenched teeth.

"I don't remember. I'm so tired. I just want him to shut up,"
she replied in a raspy voice before staggering to a worn sofa.
The man grunted in disgust, walked away, and came back a
minute later with a bottle. He picked up the child and cooed,
"Hush, little man. Mom is having a bad day." The man cradled
the infant in his arms, fed him, burped him, changed his diaper,
and laid him back in the bassinet. Caressing the boy's fuzzy,
dark hair, he talked to him as if he understood. "Okay, now, I
need to take care of Mom."
Casting a glance over his shoulder, he reached into a small
chest and retrieved a spoon, a rubber tourniquet, a lighter, a
syringe, and a packet of brownish powder. He placed a small
amount of powder in the spoon and held the lighter under the
spoon until the powder melted. He drew the liquid into the
syringe. Tying the tourniquet just above the woman's elbow, he
spatted her arm, causing a vein to bulge. The man plunged the
needle into the woman's arm and injected the liquid into her
vein. She leaned her head back on the ragged couch and
seemed to float into another world as she relaxed completely.
A smile flickered across the man's face when he checked
once more on the baby who slept, sucking a thumb. He brushed
a kiss on the child's forehead and whispered, "They should
make a wanted poster with you on it. It should read, 'Wanted
for stealing hearts.' You've stolen mine, so I know I'm not
completely heartless. No, you're enough to make me want to
get clean, but it's so hard." The man glanced back at the
woman, deep lines etching his brow above dark eyes. "Mom's
not heartless either. One day, you'll see. Still, I need to leave
her to save myself, but I'm afraid to leave you. I love you, little
man. Sleep now. And know this, if I do leave, I promise to come
back for you."
The man repeated the procedure with the powder, spoon,
lighter, and syringe and injected himself. He sat beside the
woman and let himself go to another plane of existence as the
heroin coursed through his veins.

Ray barked orders as he arrived. "Officer Marceau! Keep
those damned reporters away from the scene! Tase them if you
have to!"

Ray ground his teeth in annoyance.
This story does not
need to break before I can tell Robert's family what's
happened. How do I tell my own wife? She and Robert were
once friends. And I hate reporters. Pains in the ass.

At the crime scene, Ray met Brian Baker and his partner,
Ray's sister-in-law, Christine Gautier. Ray missed the days
when he had worked side-by-side with Chris. Their first case
together had introduced him to his wife, Larkin. Memories of
those days flooded over him now as he thought about the male
homicide victim in front of him. He said the name with its
French pronunciation in an inaudible murmur. "
Row-Bear
LaFontaine." Remembering Robert brought unwanted mist to
Ray's sapphire-blue eyes.

During his life, Robert had been both Ray's best friend and
arch rival. Looking at his lifeless body from behind the crime
scene tape now, Ray tried to remember why there had been so
much animosity between them.
Yes, it was about a woman, one
of many Robert chased. Mia Godchaux, my fiancée turned to
Robert when I got shot. Later, Robert tried to conquer Larkin,
but the love between us endured.
"My wife is no pushover," he
mumbled.
I can't think about this now. I need to focus on the
task at hand. God! Robert—murdered.

At this moment, Ray wondered how he was going to tell
Robert's
wife
, Deanna, her husband was dead in the company
of a woman twenty years younger than he was and that both of
their hearts had been removed. How was
Police Chief Raiford
Reynolds
going to tell America that a philandering United
States Senator and his presumed lover had been brutally
murdered in the man's hometown of Eau Boueuse, Louisiana?

Ray surveyed the area where Robert's body had been
found. It wasn't a road. It was little more than a dirt path
overgrown with weeds near the old train trestle and only about
two miles from his brother's fenced-in home. An almost
primeval forest grew around it, and Spanish moss draped from
the limbs of the ancient oaks and cypress trees in ankle-deep
water to the side. Under normal circumstances, the water
would have been much deeper. No tree frogs sang in the
dryness. Except for the occasional bay of the hunting dogs with
a man in orange garb, the tone was unnervingly quiet, voices
barely above a whisper.

This made the perfect spot for making out. We used this
place as teenagers. Robert and I came here on a double date
once.
He chuckled under his breath at the memory of trying to
scare the girls into getting closer. "Rob, you were always a
scoundrel."

Ray ducked under the yellow tape and arrived at Robert's
expensive Mercedes. For the first time since his initial murder
investigation when he was twenty-two, Ray left the scene and
went into the woods to throw up. The bitter, metallic smell of
blood assaulted him and the brutality sickened him. The fact
that Robert had once been a friend touched a nerve long-buried
for the pain of it.

Ray felt a gentle hand on his shoulder as Chris came to his
side. Only two inches shorter than Ray's six feet, she did not
have to reach up to touch him. With genuine concern she
asked, "Ray, are you okay? You don't have to be here, you
know, but Brian thought you would want to be."

"I do. You know I
can't
stay behind the desk on this one."