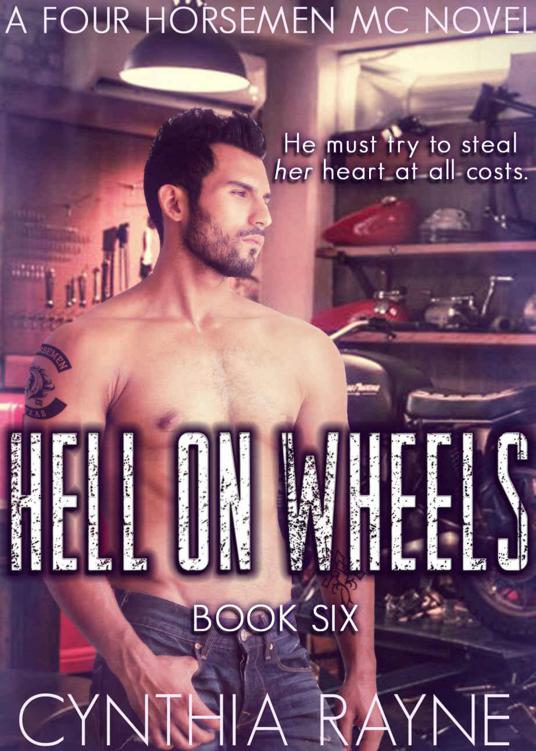 Books in the Series

If you enjoy the series, please visit my
website
to sign up for my
new release newsletter
. I will only
email you when there is a new book in the series coming out. There will be some exciting free reads set in the Four Horsemen universe coming soon!

Books in the Series

“We have to shut Hades down.”

Axel gaped at his brother, Voodoo, as though he’d lost his damn mind.

They were seated in Hades, having coffee in one of the red vinyl booths. The hotel and the attached diner were becoming a lucrative business for their club, the Four Horsemen. People came from nearby towns to eat at the diner due to Voo’s mad skills in the kitchen. He’d trained to be a chef in New Orleans, and he was the proprietor at Hades. How the man took ordinary ingredients and made them into somethin’ lip-smackin’ good, Axel would never know.

Axel was a decent cook, but a far cry from a chef. But he was the president of the Four Horsemen and needed an explanation. “And why the fuck would we do that?”

Voo looked left then right before he spoke, which was odd since they were alone. The diner hadn’t opened for the day. Since Voo had stepped up as the club’s VP, they’d been having these morning chats once or twice a week. “We have a ghost.”

Axel frowned. It was the last thing he thought Voo would say.

Every one of the brothers had a quirk. Shep was irritatingly intuitive, Steele loved the ladies, Coyote drove the double-decker nerd bus, Cap had a thing for punk rock. And Voo had a strong belief in the supernatural, because he’d been born and bred in New Orleans. It was in the air down there.

Axel personally thought it was a bunch of horseshit, but he wouldn’t knock a brother for his own belief system. If it was real for Voo, then he’d have to handle it that way. But he couldn’t allow one of the club-owned properties to be shut down.

Since Axel had become the club’s president, his life was ruled by club business and he didn’t need a fictional problem to solve. Their former president, Captain, had been voted out of his position, and his brothers had voted Axel in to replace him. It happened fast and he was still reeling from all the job responsibilities.

Axel had been the club’s road captain for years so he was familiar with officer duties, but he had no idea the presidency could be such a time suck. He barely had time to run his mechanic’s shop, Seventh Circle Motors.

With a sigh, Voodoo folded his arms over his chest and leaned back in the booth. “
Mais non
.”

Oh, fuck. Voodoo brought out the Creole when he was pissed. Or when he was tryin’ to make time with a woman. Ladies loved the accent.

Voo was easy on the eyes too. He had skin the color of creamed coffee, short dreadlocks, and eyes that looked almost silver. And he had penchant for rock star duds. Today, he wore a pair of jeans, motorcycle boots, his cut, and a leather muscle shirt.

Where the hell do you buy a leather shirt? A sex shop?

Axel stifled a shudder.
And on that disturbing note, back to the problem.

“It’s in the hotel. I’ve not sensed its presence here. Yet,” Voo said ominously.

“You’ve seen it then?” Maybe Voo needed a trip to the nut house instead. Maybe the stress of the vice-presidency had gotten to him, and he was cracking up.

“Okay.” Voo had an Ouija board or something?

He sighed. “And items have gone missing.”

“I didn’t know poltergeists get hungry and thirsty.”

“Perhaps it is a hungry ghost,” Voo explained.

“A what?” Axel blew out a calming breath.
This is real for Voo. Remember that.

“My
grandmere
said it is important to offer food and drink to the
loas
, and they are mystical beings, too. Lots of otherworldly creatures crave food and drink.”

Axel knew he’d regret asking this. “And what’s a
loa
?”

Voo drummed his fingers on the table. “We don’t have time for this. I can school you in the ways of voodoo later. But right now, I must take you to the room it haunts. We have to close the hotel and diner or expel the
fantom
.”

This felt like a job for Ghostbusters, not the Horsemen. Axel checked the clock on his cell. Not even six in the morning and he had a ghost hunt.
Yep, another strange day in Hell, Texas.
But since when had things ever been simple or easy at the MC?

He gulped down the rest of his coffee. “Lead the way, brother.”

It was a dark and stormy morning…

Minutes later, Axel ambled down the sidewalk with Voodoo at his side, feeling like he’d somehow stumbled into a leading role in a bad episode of
Scooby Doo.
Even the weather was atmospheric. The wind howled and blew prairie dust; along with a couple of tumbleweeds through the parking lot. They walked along the backside of the building, heading down to the very last room.

It was mid-November and the nights had gotten cool. Well, cool for Texas. It went down into the fifties at night, and it was still cool at five-thirty in the morning. Axel had thrown a gray hoodie under his cut that morning to ward off the chill.

They stopped in front of the last door. The glossy black plaque read
Room 26
.
At least it wasn’t unlucky 13.

Voo handed him a velvet sack tied with ribbon, which he’d pulled from the front pocket of his cut.  It fit into the palm of Axel’s hand and it had a pungent aroma…sage? A hint of sulfur.

Voo believed in juju, or magic. He thought it could protect you or seriously fuck you up. Axel had been on the receiving end of little bags like this, along with disturbing Blair Witch-like wind chimes.  He usually shrugged it off, but he was heading into an exorcism. He hoped there wouldn’t be pea soup. He hated that green gunk.

Voo pulled the master key from his cut and unlocked the door, waving his hand with a flourish, indicating Axel should go first. Axel didn’t draw his gun because you can’t shoot Casper, and stepped into the room to take a real good look around.

It was a normal Hades room. Queen-sized bed, Formica table and chairs. A wire clothing rack bolted to the wall. Was he supposed to be looking for cold spots? Axel sighed. Well, at least he didn’t find Carol Anne from the
Poltergeist
movie sittin’ in front of the television set, saying, “They’re here!” in an eerie voice.

Axel glanced at Voo. “I don’t see anything. What about you, brother?”

Voo’s stared at the bed, eyes narrowed. “Listen!” he whispered, turning his head to the side.

Just as he was about to suggest a CAT scan, Axel also heard a noise under the bed. It was somewhere between a deep breath and a sigh.

Then he heard it again. He glanced at Voo, eyebrows raised.

Voo pressed a finger to his lips and Axel nodded. They walked to either side of the bed. Voo counted down on his fingers:
three, two, one.

And they gripped the bedframe, intending to lift it up, when somebody darted out from underneath and made a run for the door.

Somebody real. Not a ghost.

Axel ran to catch up, slamming into the figure and pinning him against the door. He wore a pair of baggy jeans and black hoodie.

Axel ripped the hood back…to reveal a spill of honey-colored curls.
The Phantom of the Hotel Room…was a woman?

She spun in his arms, watching him with enormous blue eyes. “Please don’t hurt me!”

Axel figured she had to be in her mid to late twenties. She was short, a little over five feet, with a heart-shaped face, tawny sun-kissed skin, and a full mouth. She was a cute, a girl-next-door type. And not a stick figure, either. She had hips and breasts. She might be short, but she was all woman.

Where the fuck had that come from?

Axel mentally shook himself. Maybe he’d gone too long without getting laid. He shouldn’t be standing there pondering her breasts and thighs, for fuck’s sake.

His chivalrous instincts kicked in and he backed off, putting a good foot between them as he held his hands up. She was obviously frightened. “No one’s going to hurt you, I promise. Tell me your name.”

Voo sidled up beside him and Axel flinched. He’d forgotten anyone else was in the room with him for a minute.

She bit her lower lip and then nodded, as though deciding something. “I’m Charlie Nash.”

“Charlie? You don’t look like a Charlie.” Axel raked his gaze over her once more.

“Charlene,” she said, a flash of annoyance in her bright eyes. “But everyone calls me Charlie.”

“
Well, Charlie, my name is Axel, and that’s my friend is Voodoo,” he said, hooking a thumb in Voo’s direction. “He owns the hotel.
Let’s talk.” He heading to the table and Charlie trailed after him, her movements slow and uncertain. He pulled out a chair for her and she hesitated before sitting. Voo sat in the other one, while Axel perched on the bed. “Why are you squatting in our hotel?”

She stared at her lap, her hands neatly folded on her thighs, and then she glanced up at him, eyes impossibly wide and gleaming with unshed tears. “I’m sorry. I needed someplace to hide.”

“Who are you hiding from?” Voo asked, brow furrowed.

Axel glanced at him. Like their former VP, Voo had an uncanny ability to read people. It was almost paranormal…assuming you believed in that shit.

“My ex-boyfriend. He’s violent,” she said, grasping the pendant on her necklace. She moved it back and forth on the thick chain in a nervous gesture. “I’ve been running from him.”

Voo tipped his head to the side, studying her.

Charlie swiped at her eyes with the sleeve of her jacket. “Please, I can’t talk about it. I’m sorry.”

Axel instantly felt like an ass. He’d been raised by a single mother, because his father had gotten tossed in jail when he was a kid. And he hated seeing a woman cry. He handed her the handkerchief from his front pocket. Thankfully, it wasn’t stained with motor oil.

The Four Horsemen specialized in ‘Asshole Be Good’ cases. They’d taken on child molesters, rapists, child support dodgers, and the occasional murderer. They made bastards see the error of their ways and collected a hefty fee from the dicks in the process, which the Horsemen then shared with the people they helped. And while they’d recently gotten mixed up with Byron Beauregard, a bootlegger and Dixie Mafia member, they were determined to hold on to their wrong-righting roots.

Witch Switch by Nancy Krulik
Don't Forget Me by Sia Wales
Broken Pieces by B. E. Laine, Kim Young
Slavemaster's Woman, The by Angelia Whiting
See Me by Susan Hatler
No One to Trust by Iris Johansen
The Garden of Eden by Hunter, L.L.
FIRE AND ICE by Julie Garwood
Educating Esmé by Esmé Raji Codell
The Reef: A Passionate History: The Great Barrier Reef from Captain Cook to Climate Change by McCalman, Iain
Our partner