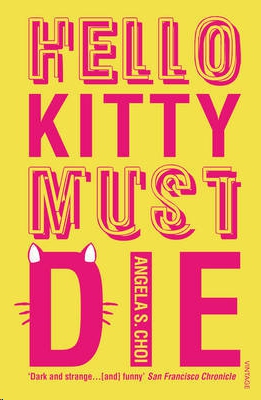 ON THE OUTSIDE
, twenty-eight-year-old Fiona Yu appears to be just another Hello Kitty—an educated, well-mannered Asian-American woman. Secretly, she feels torn between the traditional Chinese values of her family and the social mores of being an American girl.

To escape the burden of carrying her family’s honor, Fiona decides to take her own virginity. In the process, she makes a surprising discovery that reunites her with a long-lost friend, Sean Killroy. Sean introduces her to a dark world of excitement, danger, cunning and cruelty, pushing her to the limits of her own morality. But Fiona’s father throws her new life into disarray when he dupes her into an overnight trip which results in a hasty engagement to Don Koo, the spoiled son of a wealthy chef.

Determined to thwart her parents’ plan to marry her off into Asian suburbia, Fiona seeks her freedom at any price. How far will she go to bury the Hello Kity stereotype forever? Fiona’s journey of self-discovery is biting and clever as she embraces her true nature and creates her own version of the American Dream, eliminating—without fear of remorse—anyone who stands in her way.

No part of this publication may be reproduced or transmitted in any form or by any means, electronic or mechanical, including photocopy, recording, or any information storage or retrieval system, without permission in writing from the publisher.

Any similarities to people or places, living or dead, is purely coincidental.

This work has been previously published in print format under the following ISBNs:

All Rights Reserved. Used by Permission.

All Rights for THE END OF MUSIC and PRIMARY WAVE TUNES Controlled and Administered by EMI VIRGIN SONGS, INC.

All Rights for M.J. TWELVE MUSIC Controlled and Administered by SONGS OF UNIVERSAL, INC.

Reprinted by permission of the Hal Leonard Corporation

and UNIVERSAL-SONGS OF POLYGRAM INTERNATIONAL, INC.

All Rights Outside the U.S. and Canada

All Rights Reserved. Used by Permission.

All Rights in the United States and Canada Controlled and Administered by UNIVERSAL-SONGS OF POLYGRAM INTERNATIONAL, INC. and EMI GROVE PARK MUSIC, INC.

All Rights Reserved. Used by Permission

All Rights for MAN WOMAN TOGETHER NOW!,

Words and Music by Kurt Cobain

All Rights Controlled and Administered by EMI VIRGIN SONGS, INC.

“Come As You Are”

Words and Music by Kurt Cobain

All Rights Controlled and Administered by EMI VIRGIN SONGS, INC.

I would like to thank the wonderful people who made this project possible:

Robert Ressler, my creative writing coach, for guiding me through my transition to the writing life

John Kithas, for employing me while I wrote this book

Lynda, for telling me to just start this book already

Adrian Weber, my friend, personal editor, and reader, for helping me come up with a kickass title, editing my first draft, and cheering me on

Marie Mockett for guiding me through the querying/ publication process

Andrea Somberg for giving me suggestions to polish the novel

Josh Getzler, my fabulous agent, for going above and beyond the call of duty to sell this novel

Alison Janssen, for being a brilliant editor

Ben Leroy, for buying this novel in the first place

Mom Dad for putting me here on this planet

Meatball, my fat parakeet, for being an inspiration

I
T ALL STARTED
with my missing hymen.

The existence of that untouched membrane sent every American boy running, especially when I told them that we couldn’t have sex until we got married. As no one wanted to marry me by the third date, my insistence of keeping my hymen intact put a huge damper on my dating life. Had my parents and I stayed in Hong Kong, it would have been less of a problem. Traditional Chinese people frown upon premarital sex.

But we were not in China. We lived in the home city of the Sisters of Perpetual Indulgence who had been “defining San Francisco values since 1979.” We lived in the golden state of California, which had the second highest teen pregnancy rate in the nation. We lived in the United States of America, the nation of
Girls Gone Wild
, where that thin sliver of tissue did not get anyone’s family an extra head of cattle. All it did was keep me home every Friday and Saturday night.

So when I met Chip, I decided to assimilate into debauchery and vice, to bite into forbidden fruit American-style. Family honor be damned. Not because Chip was Mr. Right, but because he happened to be Mr. There-At-The-Right-Time. Except there was a problem: my father.

And I was free to sin.

Thank God the Chinese are not into honor killing—at least I would not be dragged out into the village square and stoned, stabbed, or set on fire. I considered myself lucky.

It would just make my mother cry.

Unfortunately, my hymen felt differently. The dozen condoms I bought sat unused on the nightstand, next to a packet of Plan B pills. Suspenders
and
a belt for me. I am a woman who buys double insurance. But my insurance proved unnecessary for my hymen refused to be obliterated, pulverized, annihilated. Its resistance to all three of Chip’s attempts had not been futile. It left him whimpering and nursing himself in the dark. It sent me to Dr. Ng’s examination room.

“His weenie bounced out of me like I had a trampoline down there. I must have one tough hymen. Maybe you’ll need to cut it open. You can do that right?” I asked. Lying on my back on the paper-covered table, I counted the little holes in the ceiling tiles while Dr. Ng examined me with a long Q-tip.

“No, seriously, it wouldn’t go in. I kept asking him what the hell was wrong with his equipment. Maybe he was too small. He was the same size as a low-absorbency tampon. Do you think that matters?”

“That’s what I thought. But anyway, I told him it wasn’t his fault as that’s what God gave him. Then he went all floppy.”

“Yeah, I was trying to make him feel better.”

“Next time, Fiona, don’t try to make him feel better.”

“He wouldn’t let me wipe him down with an alcohol pad. You know, to sanitize that area before slipping the condom on.”