Read Help From The Baron Online

Tags: #Help from The Baron

Help From The Baron 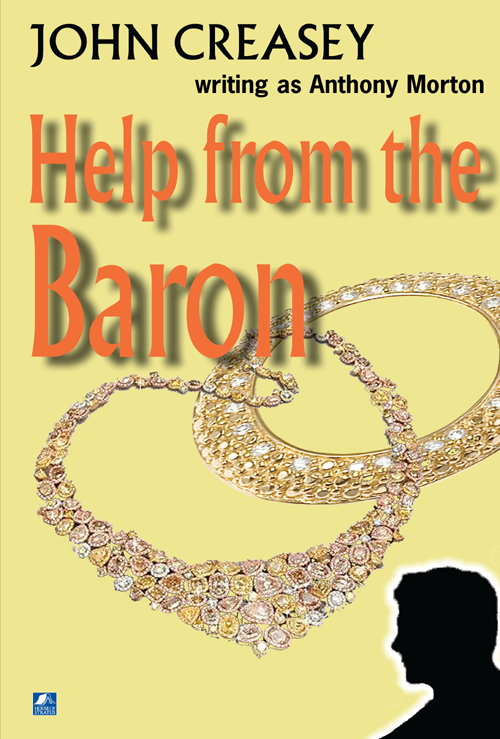 Help from The Baron

The right of John Creasey to be identified as the author of this work has been asserted.

This edition published in 2010 by House of Stratus, an imprint of:

John Creasey – Master Storyteller - was born in Surrey, England in 1908 into a poor family in which there were nine children, John Creasey grew up to be a true master story teller and international sensation. His more than 600 crime, mystery and thriller titles have now sold 80 million copies in 25 languages. These include many popular series such as
Gideon of Scotland Yard, The Toff, Dr Palfrey and The Baron
.

Creasy wrote under many pseudonyms, explaining that booksellers had complained he totally dominated the ‘C’ section in stores. They included:

Never one to sit still, Creasey had a strong social conscience, and stood for Parliament several times, along with founding the
One Party Alliance
which promoted the idea of government by a coalition of the best minds from across the political spectrum.

He also founded the
British Crime Writers’ Association
, which to this day celebrates outstanding crime writing.
The Mystery Writers of America
bestowed upon him the
Edgar Award
for best novel and then in 1969 the ultimate
Grand Master Award
. John Creasey’s stories are as compelling today as ever.

Bodies seldom get into the River Thames by accident, although it is true that few days pass when at least one is not taken from the indifferent waters of London’s river. Most of these are found between Putney - where on a day in spring the Oxford and Cambridge boat-race starts and sixteen young stalwarts and two near-pigmies provide delight, excitement, exercise of lungs and larynx for a million partisan Londoners - and Tilbury Docks. Of every dozen bodies found between these two points, at least six are pulled from the river by the River Police within a short distance of that crowded stretch of water between Westminster Bridge and Tower Bridge.

These facts preoccupy very few people. The Press takes a hopeful interest, but only the police trouble to make a record and turn a corpse into a series of notes on an index card. The police are never surprised to find a corpse. To the river patrols it is almost a matter of course to change direction, use the boat-hook, haul the body in and proceed to the nearest landing-stage. The first thing they do, of course, is to make sure that they have in fact found a corpus, that life is truly extinct, and that artificial respiration will do nothing to resuscitate the unhappy victim of circumstances.

So rigid are the ways of the London police, whether of the River, the City or the Metropolitan area, that the deceased is not officially considered to have passed on until a police-surgeon or, in extremity, some other doctor, has formally pronounced that life is extinct. From that moment onwards the discovery is a matter for investigation; often some surprising facts are discovered about the circumstances which led to the extinguishing of life.

Few men knew more about the variety of contributory causes than Sergeant Worraby, of the River Police, Westminster Division. Youthful officers on patrol with him on one of the fast police launches frequently declare that Worraby must be able to smell death at a distance. They say this admiringly. He will nose the bows of the launch towards a certain spot, call for the searchlight to be switched on, and stand heavy-footed in the thwarts while the inexperienced ply the boat-hook under his directions. His varied, extensive and colourful vocabulary is never really abusive; simply expressive.

The truth is that Worraby knows the River as another man might know a country lane or the vegetable garden at the back of his house in Muswell Hill or Wembley. He knows each little eddy; each drift of the current; every spot where a body will fetch up at high tide; every spot where it is likely to be rolling at low-tide. Being a conscientious officer, he invariably inspects these prospective watery graves, and so helps his legendary reputation to become a little more fabulous.

Worraby seldom talks about his prescience, his knowledge or his discoveries, although after the third pint - or, at Christmas and festive occasions, his second port - he will sometimes start to confide. Once launched, he is difficult to stop, and it is perhaps as well that he is an abstemious man by training. To look at, he is just another police-sergeant, a little on the plump side, fifty-seven years old and three years off retirement; grey-haired, clean-shaven, heavy beneath the jaws, with tired, patient grey eyes.

Many things are said about Worraby, the most persistent being that he needs only to glance at a corpse beneath the demoralising light of the launch’s searchlight to be able to say - as he invariably does: “Obvious case of felo de se, my lad”, or “Homicidal victim, no one ever did that to himself”, or “Lay you ten to one that he wasn’t dead when he hit the water.” Like a doctor diagnosing childish complaints, one glance is all that Worraby needs. He is seldom proved wrong at public expense, doctors who are already far too busy with the living are nevertheless employed to dissect certain parts of the anatomy of the corpse, write out extensive reports, then give evidence at long and often wearisome inquests; and the verdicts almost invariably concur with Sergeant Worraby’s original: “I can tell you what happened to him, my lad - hit over the head and thrown in. Give you ten to one they tossed him in from Gimble’s Steps.” Or Fisherman’s Bottom, Tickerton’s Wharf, Moss Lane or any of a dozen romantically-named places. He has found by a mixture of experience and experiment that when a body or heavy object fetches up at a certain place, it enters the river at a point which could be specified.

Up and down the Thames, at the Thameside Divisions and at Scotland Yard, there is a kind of catch-phrase: “Ask Worraby, he’ll know.” And they ask, and he knows.

He was aware of and proud of his reputation, although, being a Cockney born and bred, and the sixth son of a family of eleven in the days when men were men and women had few opportunities to wear the trousers, he was not conceited.

Although he would never admit it, and probably would not even think of it, the truth is that he loves the Thames. He loves the smells - fish near Billingsgate, oil at Tilbury, spices at the Pool, where the ships come in from distant lands - from the Isle of Spices itself, or Mozambique, from the Gulf of Aden, from the hot-blooded lands of the Middle East and the dreamed-of countries like India and Pakistan, from little-known islands and from great continents. Fish, petrol and spices, then; or tea being unloaded into bond, coffee from Brazil or Africa, wool from the Antipodes and cotton from Egypt, from Africa or from the United States, tobacco from Rhodesia and Virginia, or a dozen places. It was said that Worraby had only to sniff the river breeze as a laden cargo-boat passed to say where she came from and what she carried, what her tonnage was, whether her crew were lascars, Chinese, Malays, white men, Dutch or Greek, French or Madagascan.

There were the warehouses, some topped by flaming neon signs at night, others dark and gloomy. The broken skyline of the south bank, the more aristocratic outline of the north; the long bridges; the spots where small boys dived into the water on warm nights; the tiny beaches; the wharfs, docks, barges, pleasure boats, buoys, dinghies, the flotsam and jetsam, the places where the mist first gathered before fog spread in earnest over the river’s broad, soft bosom - all of these were part of Sergeant Worraby’s life, his past, his present and his future. It is unlikely that he ever thought of the word “romance” except in terms of boy and girl and the pictures, which he visited once a week with his capable wife, but he was part of the weft and weave of London’s romance; he was truly alive at the pulsating heart of the world.

On the night of March 11th, a misty one when the fog was unlikely to become thick enough to worry about seriously, Sergeant Worraby sat in the bows of the Police Launch, A45, called an order, and saw the muddy bank looming up slowly through the mist near Bad Man’s Steps. He called for the searchlight and, as it sprang out and struck the mist so that it looked as if a giant were breathing his hot breath over the river, he saw the body of the girl.

“Easy there! Jem, gimme that boat-hook, she hasn’t been in long. Swing her round, Charley.”

She was probably a pretty girl. She lay on her back, rolling very gently, as if floating in her sleep, bumping softly against the granite sides of Bad Man’s Steps. Her long, fair hair spread out on the water, mist enshrouded her, her eyes were closed and her mouth slightly open. Scummy water lapped against her face, ran into her mouth and trickled out again.

“Hold it,” ordered Sergeant Worraby, boat-hook in hands and one foot on the gunwale. In spite of his sixteen stones, he could balance as neatly as any tight-rope walker. The boat-hook caught in the dress at the girl’s waist at the first attempt. Worraby drew her slowly towards the side of the boat, careful not to let her roll over.

First and Last by Rachael Duncan
Mia Dolce by Cerise DeLand
Beneath the Surface by M.A. Stacie
Desire for Love (The Club #13) by S.E. Gilchrist
Tithe by Holly Black
All That Lives by Melissa Sanders-Self
Painless by S. A. Harazin
The Devil Is a Lie by ReShonda Tate Billingsley
Vow of Obedience by Veronica Black
All Up In My Business by Lutishia Lovely
Our partner