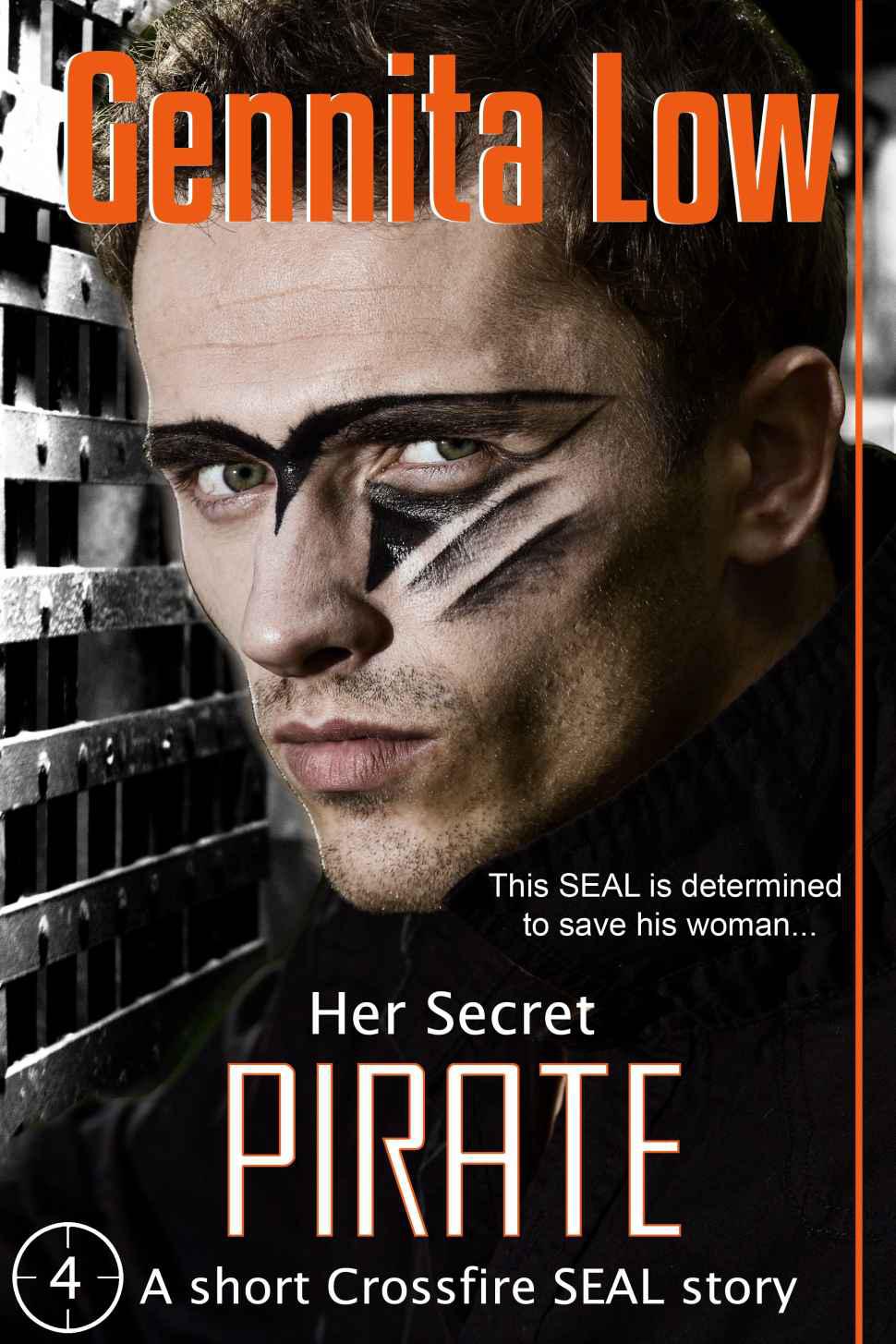 Rebecca Powers, aid to her ambassador father, was on board a food aid ship to promote the new international treaty when pirates struck. Under attack, she and her father are separated, hiding from the pirates.

"Zone" Zodenko's navy SEAL team is tasked to board the ship, take out the pirates, and get to the ambassador and his daughter before they are taken hostage. Zone had previously gone out with Rebecca before and is determined to be one of the SEAL squad going on board for the extraction.

This book is a work of fiction. The characters, incidents, and dialogue are drawn from the author’s imagination and are not to be construed as real. Any resemblance to actual events or persons, living or dead, is entirely coincidental.

Her Secret Pirate Copyright © 2012
by Gennita Low. All rights reserved under International and Pan-American Copyright Conventions. By payment of the required fees, you have been granted the non-exclusive, non-transferable right to access and read the text of this e-book on-screen. No part of this text may be reproduced, transmitted, down-loaded, decompiled, reverse engineered, or stored in or introduced into any information storage and retrieval system, in any form or by any means, whether electronic or mechanical, now known or hereinafter invented, without the express written permission of Gennita Low e-books.

*This
story was previously part of an anthology titled SEAL of my Dreams (2011). This story has some additions.

“
The captain has determined
the Ambassador is in imminent danger of being discovered and that we must act now before dawn. The President has given the go-ahead orders. The four of you are tasked to take down the pirates
and secure the ship
. Zone, you’ve been cleared to go.”

Zodenk
o
“
Zone
”
Zonovich swallowed his relief, retaining his calm demeanor as much as possible. “Thank you, sir!”

He’d downplayed his relationship with the Ambassador’s daughter although he didn’t think his commander believed him. Just a few dates, he’d assured, which was technically true. Rebecca Powers wasn’t someone he could take out on a regular date, not when she was the personal aid to the Honorable Paul Powers, the
U.S.
ambassador to
India
, as well as his daughter. No, their secret meetings couldn’t be called dates. And they’d agreed to…cool it…he guessed that would be the term because . . . damn, he didn’t know why he’d agreed to it now. It was over an argument about, of all stupid things, war. He was a SEAL. Participating in warfare was his job.

He’
d better push all that out of his mind right now. The first order of the day was to follow instructions, go with his team to get the pirates before they turned on the news and found out Rebecca Powers was the Ambassador’s daughter. That was what initiated the “imminent danger” decision; the media was naming names and in t
his day and age, it seemed
even pirates checked their Twitter accounts while terrorizing the seas.

At the same time, the Navy had to exercise caution. The whole world would be watching, whether through the lenses of camera crews flying over the ship or social media, where everyone who thought they knew everything would spout opinions and escalate the drama. Hawk had been in deep conference, coordinating
with naval Intel and Special Operations Combined Joint Task Force higher-ups
on the best course to effectively
terminate the danger before
the stakes became higher. Zone already had instinctively known they would be sending in a small squad of men and so had privately requested to be on the team. His commander had given him a hard s
tare and a non-committal reply.

He’
d expected to be given another assignment. If Hawk knew how chummy he and Rebecca Powers really were, there was no way he’d be sent with the others to the ship. So he’d played it cool, mentioning he was her instructor and that was how they knew each other. All true. But he was glad his commander didn’t ask more personal questions because then he’d have to face the d
ilemma of actually telling the real truth
.

Not that he would lie to his commander or team. One just didn’t do that when one was a SEAL.
But the temptation
had certainly crossed his mind. Where Rebecca was concerned, the woman had him by the head and heart, it seemed.

His squad of four, including h
im, were his closest friends—
Cucumber, Mink, and Joker. Joker and he were snipers and their specialty would be needed once they’d snuck on board the taken vessel. The element of surprise had to be quick and deadly. Their target—the men guarding the captur
ed crew. They needed to take out all four
. Cucumber and Mink’s job was to take down the rest as quickly as possible while he located those who were still in hiding in the ship, Rebecca being one of them.

While they silently prepared for the mission, his commander, Hawk McMillan, finished his conversation on the satellite phone and turned to them, his expression revealing bad news ahead. Hawk and the rest of Zone’s SEAL team were heading for another target, the “mother” ship coming this way.

“Listen up,” he said. “These are well-prepared hostiles, armed with grenades, launchers, you name it, they probably have it. Their goal, presumably, had been the food aid on board. Everything was still fine at that point un
til the pirates found out VIPs were
on board. The fucking media has broadcasted the news all over the channels. So now they’re making threats and looking for the
A
mbassador.

“We know
he
and his aid have hidden themselves in the safe rooms but they were somehow separated. The Ambassador has radioed in that he’s okay but he’s more concerned a
bout his daughter. He said
if they find his daughter, he’ll give himself up. Needless to say, your job is to make sure you find both of them when you get on board.”

“How many on board, sir?” Cucumber asked.

“We see four securing the crew and we think eight searching the ship. The firefight took out two of the hostiles. The ambassado
r’s men and the crew’s shots have
sunk their skiff, so they’re angry and getting angrier, and they’re starting to feel anxious waiting for their main ship to pick them up. Now, whether my crew and I succeed in delaying the other ship, you four have your orders. Unless they surrender, shoot to kill.”

“It’s dark. They’ve purposely killed the lights because they know about the possibility of snipers and they’re using human shields. Study the map and photos, locate the safe rooms
, and search them. Be aware
they’re searching too so the ones in danger won’t know you aren’t the bad guys. Only the ambassador knows because he has the means to communicate. As far as we can tell, the rest in hiding know nothing so you have to exercise caution who you’re taking out.”

They did last minute checks of their equipment going into their waterproof packs and pouches. Cumber came over and slapped him on the back.

“Knew you wanted in,” he said.

“Damn reporters just don’t think who they’
re endangering, broadcasting who’s on board and telling everyone she’s the Ambassador’s daughter.
”

Zone shrugged. Too late for that now. “Maybe you can tweet them the third finger salute,” he suggested wryly.

Cumber snorted. “
I don’t tweet, I shoot. Look, man, I know you have things on your mind. I got your back, you know?”

“Good.”
Cumber nodded, threw him a thumbs-up before heading back to his gear.

Zone looked down at the map, studying all the areas outlined in red. Swimming to the ship and slipping on board were the easy part, even though their usual eight-man team had been divided in half. Taking out four hostiles? Hell, he could do that with one arm tied around his back. His finger touched Rebecca’s photo
taped to the inside flap of his pouch
, tracing the outline of her face. But making sure his woman wasn’t harmed? That part made his ches
t area ached like never before.

Where the hell was Rebecca hiding?

Rebecca had never been so afraid in her life. This morning, she’d been so excited about taking part in the international food aid treaty, knowing she was doing something about which she was passionate instead of just working the red tape. She was finally about
to see, with her own eyes,
the food and aid
,
which had taken months to finalize, finally
reached the people who
needed them most instead of being “lost” or confiscated once they reached port. Their entourage had boarded from the
Seychelles
Islands
and started their goodwill voyage after signing the treaty, partly political publicity stunt and partly a sincere wish to see a good start to the food program. They were going to meet up with a navy shi
p, flying off from there
, and then later in the month, fly to
India
to meet the
ship as it arrived at port
. Ev
erything had been planned to the last detail
, from meeting the VIPs to publicity shots to map routes to handing out the food to the villagers.

But that was this morning. All the planning hadn’t covered this. Never in her life had she imagined that by dark, she would be hiding in the bowels of the ship being chased by
pirates.

They had shot at them. She shuddered at the memory of the blood from an injured sailor. Was he all right? She didn’t know because everyone started running in different directions.
The ship’s crew had returned fire but the pirates managed to get near enough to board. She heard someone shouting he’d put a hole in the pirate’s boat as the fighting intensified.
Their security detail had protected them as they hurried
down the stairs. So much shouting. And now, total silence.