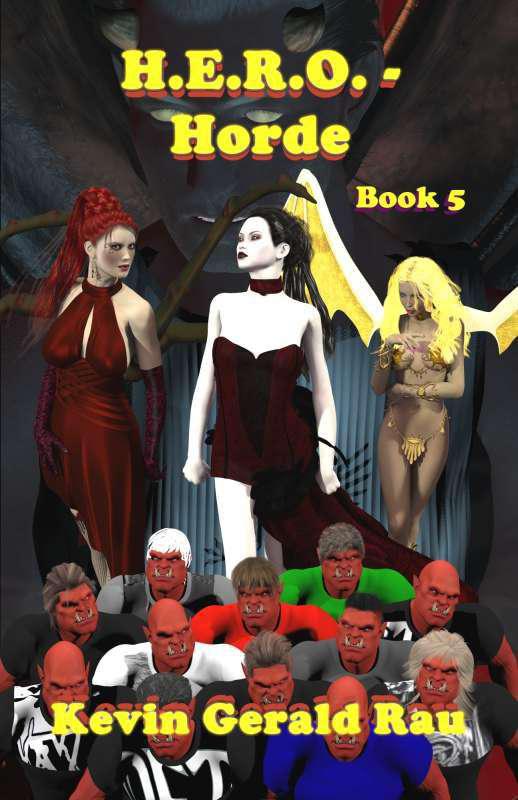 All characters are original and fictional.  Any likeness to real people is purely incidental.

Wondering what the some of the characters look like in detail?
http://www.kevinrau.com
has images of many of the heroes.

As I flew in the night sky I watched my friend Fluff float up to the top of the night club building of The Lady's Web.  Rayna - my best two-legged pal in the world – held onto Fluff's two claws as he floated.  She wore her pink and white costume – while clothing made for something handier to grab onto, I didn’t see a good reason for wearing it.  Sure, if she used it to hold gear, or magical devices, it would be well worth wearing, but I’d heard her say that she never gets cold.  The three gazers with her were like me, we didn’t bother with clothes - even though they didn’t have fur apart from their mohawks and goatees.

I wish I were a really big dragon, and then she could ride on my back.  We’d fly down, lure out the bad guys and I’d breathe fire on them all.  The townsfolk would leave their buildings and cheer us in the streets.  The king would hold a wonderful ceremony, presenting us with his best phat loot, and a huge feast would be held in our honor.  Instead, I’m stuck flying above her while that grouch Fluff gets to carry Rayna around, all because I’m too small of a dragon to carry a human female.

They approached the rooftop, Rayna disengaged from the slightly-larger-than-basketball sized creature and dropped to the building.  Fluff floated to her right hip area as he seemed to do when in guard mode – which appeared to be almost all the time.  I thought he was paranoid.  He just couldn’t stop looking around constantly.  Granted, I wasn’t sure if having four eyes on stalks, plus the large center eye on the front of his body was the cause for that, or if it was the paranoia.

The brown and white gazer – Gruff – followed them and hovered near Rayna’s right shoulder.  I realized how predictable the gazers were – they always stayed in a set formation around her.  The blue and white gazer named Duff floated up near her left shoulder.  The silly creature floated upside down again.  His spherical body had the four eyestalks hanging down on the sides of his black mohawk.  His armstalks hung nearly horizontal off to his sides.  The other gazers allowed their armstalks to hang down most of the time, much like a human’s arms.

I glided down behind my human, but rather than land upon her small shoulder, I twisted at the last moment and headed for the top of Fluff’s body.  His four eyestalks on top of his head all stuck straight up for the second or two before I landed on him.  I grabbed two of the eyestalks right away.

I leaned my foot-long neck forward, looked into his huge center eye and grinned at him.  He frowned even more than usual, baring his many sharp teeth.

I said, “Oh, come on, Fluff.  Do you want me sitting on Rayna’s little shoulder?  My claws might dig into her skin.  You’re armored and have such a nice big round … body.”

Rayna glanced down at us.  “Be good, boys.  You’re super strong and tough, Fluff, you should be able to handle Kar’s light weight.”

I looked up at Rayna, “Can we obtain a harness from the local leatherworker that will give me reins?”

Rayna frowned, “Be nice, Kar.  You wouldn’t want someone riding on your back, would you?”

I sighed.
Of course, I would, silly human female, if only I were big enough to carry you.  That other superhero, Psystar, she mentioned that Rayna should make a creature large enough to carry her.  The supers all have different abilities – perhaps one has the ability to make a magical ring for me to enlarge at will.  I shall have to quest for this heroine and find the next person in the quest chain to make such a ring.  I suppose then I will need to quest for the ring material and some magical substance.  No matter, it shall be done!  Note to self:  Quest added – seek out Psystar.  Hmm, I wonder how much xp I’ll gain from this quest?

Fluff made sure all four of his eyestalks stared at me, ensuring that I was well aware of his annoyance.  Gruff stuck his tongue out at us – I was fairly certain that was directed toward Fluff and grinned in response.

Fluff’s motion brought me out of my thought process as he followed Rayna to the side of the building and looked over with two of his eyes.  I stuck my neck over the edge and looked as well.

Humans stood around outside the club.  They reminded me of vampires, so many affected a gothic style of clothing and makeup.
Perhaps some of them
are
vampires, hmm.  Rayna did mention that this place would have mutants in it.  Are those so different?  Sharp, pointy teeth on many of them, claws.  My Beast Lore skill obviously isn’t high enough.  I don’t know if mutant humans even eat normal food or drink blood to survive.  Perhaps they actually are vampires.

Most of the humans outside stood around and chatted with other humans – or mutants, I supposed.  Some smoked.  Some spoke on their cell phones outside of the noisy club.

Rayna watched for a few minutes.  Then she backed up away from the edge.  She pulled out her cell phone and brought up the photo app.  After a moment, she showed us the pictures Duff had drawn after his last scouting mission.  He was dumb as a rock and couldn’t describe what he saw very well at all - but he really was quite skilled in drawing.  I grinned to myself – he had a good eye for it – or five.

She said, “Kar, Duff – you two are to sneak into the ventilation shaft, stay near the ceiling and find if any of these guys are in the club.  We need to find out if any of them are in Gene Front, or even if not, what are they up to?”

I nodded my long neck.

She continued, “If you see anything else unusual, let me know.  Well, more unusual than a building full of people dressed like that.”

She pointed behind her toward the front of the building.

I said, “Rayna, you
do
realize that as with many heroes in RPGs, you dress significantly different than the normal townsfolk, correct?”

She grinned and ran her hand down my furred neck.

She said, “Yes, Kar - I know.  That’s the
point
– I want to look different so people know I’m a superheroine.”

“Yes, but your clothing isn’t gained from adventuring.  How will people know what level you are?”

“They just do, dear.  Now, you and Duff get going.  Be sneaky, avoid being seeing, okay?  Especially you, Kar – you aren’t as used to being sneaky.  This is a quest, and successful completion of the quest requires both not causing an alert as well as finding one of the people in Duff’s pics.”

I asked, “What are the quest rewards?”

“Besides my love?  Quest xp, plus some spicy sausage.  Oh, and a gold coin.”

“Gold is a lot more valuable here than in most of the games we play.  If you were to show someone a gold coin they’d be really impressed.”

I grinned, showing off my sharp fangs.  “Yes!  I don’t have to share the coin with Duff, right?”

“Right, Duff’s quest is tailored for him.  He gets chocolate as a reward.”

“Oh, cool, this quest is dynamic for class and race!”

“Yup.  Now, remember Kar, be sneaky and as close to invisible as Duff is as possible.”

Oh, sure, like Duff is?  Tear up a few pillows; throw the feathers in the air and Duff’s not so invisible either!  Err, better not mention that….

She walked over to a ventilation shaft and looked into the small corridor.  Duff floated right into it – he had no issue changing the angle of his flight to always point his big eye forward, even though the proper orientation for ‘up’ with him changed fairly often.

I hopped over to the shaft; Fluff had floated near enough for me to handle it without using my wings.

She said, “Got your phone?”

I patted the body strap I wore that held the phone.  I nodded.

I noticed that Gruff was already distracted; he’d pulled out his own cell phone and begun playing a game on it.  I frowned – it wasn’t fair for him to play while we had to sneak around in a building.

I looked back at Rayna, waved my furry clawed hand and turned back toward the tunnel.  It wasn’t large enough to use my wings to fly down; I’d have to slide down.  Fortunately, the sound of the club below was loud enough to drown out any likely noise I’d create by thumping around in a metal tunnel.
This will be a prime opportunity to gain skill points in my stealth skill.

I saw Duff’s body spin around for his large body-eye to look at me.  He had a big ‘O’ shape on his mouth, and quickly put a crab claw up to his mouth and said “Shhh.”

His four upper eyes shook back and forth.  He looked like some kind of strange snake charmer for a moment.  I licked the big cut on my skin.

I said, “I think I just took a few health points worth of damage, but I’m still in good shape.  I’ll live.”

I glanced back at him; he was staring at me blankly, as was his norm.  I motioned to him with my hand.

"Come on, we need to find the vent down into the club."

Duff spun in the air and floated away from me.  He kept one eyestalk facing back as he moved away.  I scrambled forward, my claws clicked annoyingly on the metal piping.  I shifted my hands and feet to force the claws up slightly, although I believe I failed the check against my stealth skill, for I kept making clicking sounds.

We reached the end of the tunnel; there was a grate at the end.

I said, "Oh noes, think we are strong enough to bust it open?"

Duff spun and looked at me with his large central eye for a moment, and then he opened his mouth, reached in with one of the two crab claws and pulled a tool out.

The tool dripped with drool.  I wrinkled my snout in disgust.
Where did he even keep that, and how does he not swallow it?  For that matter, where does anything he swallows go - it's not like he has a neck and a stomach.  Apparently, I failed another Beast Lore check.

I Regret Everything by Seth Greenland
Out on Good Behavior (Radleigh University Book 3) by Dahlia Adler
The Queen's Dance (Emerging Queens) by Jamie K. Schmidt
Cold Justice: A Judge Willa Carson Mystery (The Hunt for Justice) by Diane Capri
The Fight by L. Divine
The Feud by Thomas Berger
The Illumination by Kevin Brockmeier
The Eternal Flame by T. A. Barron
Malcolm's Promise: A Re/Bound Story (Doms of the FBI) by Michele Zurlo
Goddamn Electric Nights by William Pauley III
Our partner