Read Hiding In His Dreams Online

Hiding In His Dreams 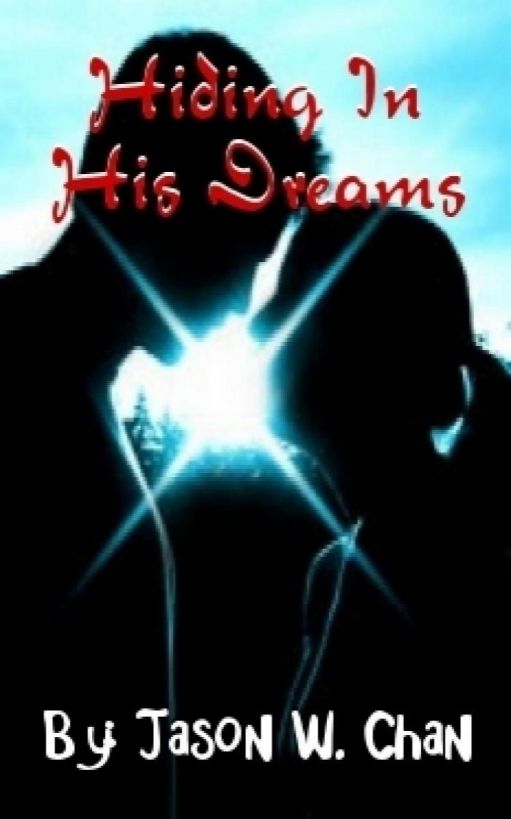 HIDING IN HIS
DREAMS

Hiding In His Dreams

This ebook is licensed for your
personal enjoyment only. This ebook may not be re-sold or given
away to other people. If you would like to share this book with
another person, please purchase an additional copy for each person
you share it with. If you're reading this book and did not purchase
it, or it was not purchased for your use only, then you should
return to Smashwords.com and purchase your own copy. Thank you for
respecting the author's work.

All rights reserved. No parts of this
book shall be reproduced, stored or transmitted by any means,
except with the written permission of the author.

“
How would you feel if the
love of your life gave you the greatest gift of all, then broke
your heart? Would you still want to know her?” A homeless young man
with short brown hair asked Luke.

Luke passed him on the street, and
looked the other away, gripping his briefcase even tighter. The
homeless that loitered around his office building in downtown
Vancouver were getting crazier every day.

But still, he considered the question,
then stopped. The question was intriguing.

He looked back at the young guy. He
could not have been any older than Luke. The homeless guy was
twitching now, doing a bizarre dance to an inaudible tune in the
October sunlight.

Luke took out a ten-dollar bill from
his wallet, and approached the man.

He gave him the bill, and the man
smiled, revealing stained, crooked teeth. “Thank you, sir. Come see
me when you have to,” he said, and returned to his wild
celebration.

Luke furrowed his eyebrows, and tilted
his head. What was that guy yakking about? Why would he ever need
to consult a homeless guy? He decided to ignore it.

When Luke arrived at the JG Thompson
Investment Banking Building, he sat down at this computer, and
started typing on an Excel spreadsheet. The categories and numbers
all blended, and soon, he couldn’t tell them apart. He didn’t know
how long he sat there, but it felt like hours.

A gentle knock on his office door
stirred him from his concentration.

“
Luke.” His supervisor,
Stew, appeared at his door, grinning. He had the jolliness of Santa
Claus, as well as his physique. Luke swiveled around in his
seat.

Stew gave him the thumbs-up and smiled.
“Congratulations! You’ve really helped the firm with the recent
merger. Those clients haven‘t stopped singing your praises. Santa
Claus might leave you a little bonus for you at Christmas. I don’t
want to ruin the surprise, but let’s just say it’s somewhere in the
high five figures, maybe even six figures. Not bad for a young
Associate, right?”

Luke nodded, and forced a
smile.

“
It’s past 10,” Stew noted.
“What are you still doing here this late on a Friday?” He stroked
his white beard.

“
I’m just looking through
this document. TD Bank needs this by Monday. I’ll be done
soon.”

“
You’re the hardest-working
Associate here, you know that? But hard-working or not, we’re still
locking down the office at 10:30, so you better get out of here
while you still can.” He was still grinning. “And don’t you even
consider bringing your laptop home with you on the weekend. We know
you’ve done it before.”

“
Don’t worry. I won’t.”
Luke’s forced smile was hanging precariously on his face. He was
afraid that if he kept this up much longer, the smile would fall
right off.

“
Speaking of closing, I
should kick Gordie out too. He’s even worse than you.”

His boss turned around, and then
paused, turning back again.

“
And don’t you think of
sleeping at the office either. We found your sleeping bag and
toothbrush.” Stew reached for something behind the wall, and held
up a sleeping bag and a toothbrush, the grin vanishing from his
rotund face.

At 10:15 pm, Luke left the downtown
office building with his laptop. He hopped on the SkyTrain and sat
next to a blonde girl. She glanced at him, a neutral expression on
her face. Then, she went back to staring out the window.

Luke turned his head slightly. He
shifted in his seat, and his arm brushed against her bare arm. They
locked eyes for just a moment. Luke was the one to turn away first,
staring straight ahead.

If she were my girlfriend, I’d put my
arms around her, he thought. And she would rest her head on my
shoulders. Then, I would put my hands in hers, and our fingers
would curl around each other‘s.

He wondered what it would be like if
she were his. Would she understand my workaholic lifestyle? He
thought. Or would she complain bitterly about it?

He wanted to talk to her, but couldn’t
think of anything to say.

At 26, Luke was in decent shape. His
dark hair was short and wavy. The young man was tall. And lanky.
But he was gaining more muscle everyday, due to his recent decision
to hit the work gym a few times a week.

Physically, he wasn’t unattractive.
Yet, he was tongue-tied around girls like the blonde next to
him.

The train arrived at the next stop, and
she got up. Luke rose to let her pass, and as she moved, he caught
a scent of her citrus perfume.

It lingered on long after she had
left.

When Luke got off the SkyTrain, he
passed Harley’s Café. As he walked, he lifted his water bottle to
his mouth. Enough water splashed onto his shirt to soak it. He
frowned, and decided to enter the café to find some
napkins.

He opened the door.

There were the usual characteristics of
a café. The sound of metal spoons clinking against cups. The strong
scent of coffee floating through the air. The chatter of patrons as
they sipped their beverages.

Luke headed to the napkin dispenser,
pulling out a whole wad. He dabbed his shirt until it was
dry.

He scanned the area.
Free Wi-Fi
, a big sign
declared.

He saw there was only one available
table, far away in the corner. He ordered a cappuccino, then took a
seat. He then took out his laptop from his briefcase and tried to
access the company website.

While he waited for it to load, he
examined his environment. He noticed that the gorgeous brunette
sitting at the next table was wearing a violet cardigan. He loved
that color.

He, on the other hand, was in a formal
and constricting black business suit.

Weak Autumn moonlight streamed in from
the dirty window, casting a spotlight on the girl. He admired the
way the light accentuated the light brown highlights in her long
chestnut brown hair.

He pretended to return to his laptop.
Out of the corner of his eye, he could see her playing some sort of
online game on her laptop. It looked that she was playing the role
of a nurse in a hospital.

A server in a green apron brought over
his drink. Luke felt his mouth go dry, so he took a sip of his
cappuccino.

“
Oh no!” the young lady
exclaimed. “I’ve been fired.” She shook her head, her shiny hair
spilling all over her shoulders.

Luke strained to get a better look at
what the girl was doing.

Was she talking to me? thought Luke.
No, she must have been talking to herself. Why were all the hot
girls crazy?

She took her eyes off her laptop, and
looked right at him. If Luke were standing up, he would shuffle
around with his hands in his pocket. He tried to avert his eyes,
but it was too late. He looked her in the eyes, which were a
relaxing green, a Caribbean green.

“
You got fired from your
job?” he mumbled. He felt his heart rate speed up, as though he
were a race car driver nearing the finish line.

“
No, just this game.
Apparently, taking care of too many patients is a cardinal sin.”
Her voice was clear, feminine, soft. It reminded him of the
soothing tone of a therapist, or a caretaker nurse.

She took a sip of her soda. “Oh well,
at least I can start over, and play again. That’s more than what
you could say for real life, huh?” She grinned briefly, then
returned to her game.

She’s beautiful, he thought. How can I
get to know her?

He racked his brain desperately for
conversation topics, but he was drawing a blank. He felt so
stupid.

He stared at her. The girl looked
around his age, give or take a couple years. Her lips were
glistening, glazed with strawberry lip-gloss. One strand of brown
hair dangled by her side. He had an urge to brush it behind her ear
for her.

Her face was open and undefensive,
radiating life, passion, compassion. She looked like the typical
girl-next-door. He loved girls like that.

He knew that if he stared longer
though, he would seem like a creep.

She looked up from her laptop again.
“Not again!” she whined, a hint of levity in her voice.

She tried to look at his screen. “What
are you playing? Some sort of stock-broker game?”

“
Oh no.” He felt color pour
into his cheeks. “Just bringing home some work.”

“
What line of work makes you
bring home work for the weekend?”

Luke gripped his cup. He was glad that
it was porcelain, because if it were plastic, it would be crushed
by the strength of his grip.

The blank look on her face gave away
her ignorance of the industry.

“
It’s where you invest money
to make money,” he explained. “I work in the merger and
acquisitions sector. I’m a middleman and buffer between two
companies that want to make a deal.”

Luke stopped talking. He was afraid he
was boring her with banal talk about the finance
industry.

“
M‘kay. That’s interesting,”
she said. The girl did not sound convinced that it was. “You must
make a lot of money.”

“
It varies.” He shrugged. He
leaned in a little closer. The pleasant peach of her perfume teased
his nostrils. “I take it you’re not in the finance
field?”

“
Oh no,” she said, shaking
her head. “I’d go crazy working in an office all day. I’m a
first-grade teacher slash pediatric nurse.” She emphasized
the
slash
part. “I
love working with kids.”

“
Yeah. And if I had time,
I’d be a child psychologist too.” She grinned. “You must think I’m
crazy.”

“
Alyssa.” She stuck out her
hand, and he took it. Alyssa’s hand was soft and moist. Luke
deduced that she must use a lot of lotion and
moisturizers.

At that moment, the bell attached to
the café entrance rang, and in walked a big man in his late
twenties. He looked like an caricature of a macho man.

He walked right over to them. “Alyssa,
baby. I knew you’d be here.” His voice was abnormally
deep.

Luke looked up at the man. Standing at
well over six feet, he had strong, thick shoulders and neck, and a
military crew cut.

His eyes bulging out, the man bent down
and tried to kiss Alyssa, but she dodged it at the last
minute.

Luke stood up, and realized he only
reached up to the man’s ears. “Hey man. She’s not interested in
you.”

SEAL's Embrace by Elle James
Calhoun Chronicles Bundle by Susan Wiggs
The Murder Bag by Tony Parsons
Marchington Scandal by Jane Ashford
Lies Ripped Open by Steve McHugh
To Love and Honor by Irene Brand
On the Edge of the Dark Sea of Darkness by Andrew Peterson
Tainted Legacy (YA Paranormal Romance) by Hope, Amity
The Secret by Rhonda Byrne
Sleepless in Manhattan by Sarah Morgan
Our partner