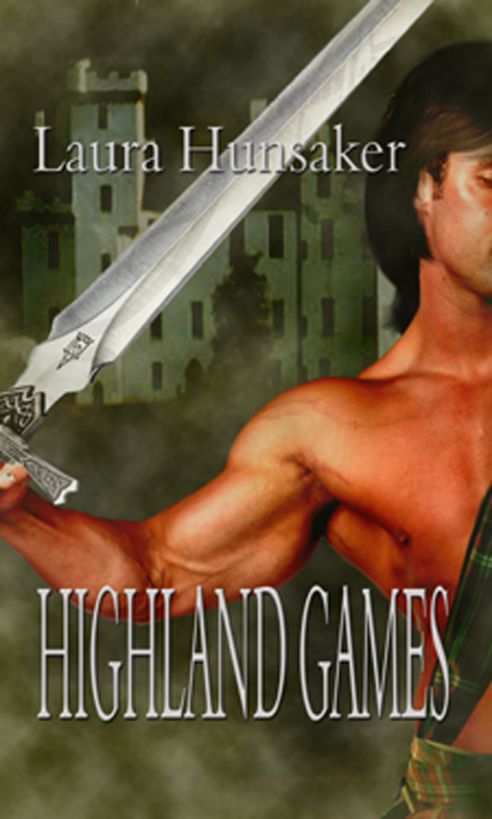 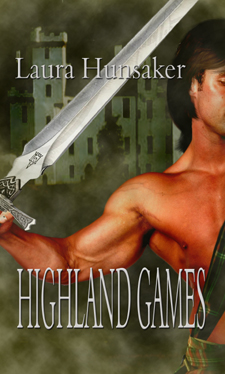 This is a work of fiction. All
characters, events, and places are of the author’s imagination and
not to be confused with fact. Any resemblance to living persons or
events is merely coincidence.

Thank you Jenna Maclaine,
without your help I’d be abusing commas and sprinkling exclamation
points all over the place.

Another shout out goes to
AnnieTegelan for always dropping everything for me no matter the
time, and no matter how lame the problem.

The hag was pulling his strings, and
Malcolm MacRobert hated having someone else's will forced upon him.
However, his laird needed him, and that was enough. Malcolm had
heard of their ally the MacRae laird taking a woman of mesmerizing
beauty from another time, and anything a MacRae could do, a
MacRobert could do as well. Steeling himself and throwing his
shoulders back, Colm braced himself for what they were about to do.
Before he could so much as take a step, a heavy hand landed on his
forearm.

His best friend and son of the laird,
Caelen was staring intently at him. “Ye doona have to do
this.”

Caelen blew out a breath,
and closed his silver eyes. “Aye, that I do.” Opening his eyes,
Caelen’s grip tightened, then left Colm’s arm. “
Virutis Gloria Merces, braithair
.”
Honor is the reward of bravery, the MacRobert family motto. By the
time Colm returned, he hoped that he had more than just honor.
Everything hinged on this.

The old hag Grissall had
told the laird a woman from a distant time needed to be brought
into their clan, but she wouldn’t say why. The witch was never
wrong in her visions, but she was a selfish old bat, and one never
knew her motives. But the laird believed this was for the good of
the clan, so Caelen had offered to go to this far away time. As
future laird, he felt it his duty. But she’d had words for the son
of the laird as well. His destiny was not yet come. And then her
hazy gaze had landed on Malcolm. Straightening from his position
Malcolm had stalked over to the old woman and glared down at her
from his impressive height. He was taller even than the Caelen, who
stood a handful over six feet.

“
Why are you lookin’ at
me, old woman?” Malcolm had all but growled at her.

“
Have you a point, hag?”
Malcolm looked deliberately mocking. He hated this old witch.
Witch, he almost smiled as even her name, Grissall, meant witch.
She was self-serving to the end, and he didn’t believe for one
moment that she was concocting this plan for his future
happiness.

Grissall cackled at him.
“Aye, I’ve a point, lad. Your destiny lies in the future. And your
destiny is my destiny.”

“
Stop speaking in riddles.
How can we share the same destiny? ‘Tis no’ possible.” Colm was
glaring at his laird Iain MacRobert. “She’s trying to twist fate to
her own will. And I’ll no’ be a part of this.”

Before he could storm out,
his laird, who until now had been quiet, stood and said “You’d deny
your laird? The man who reared ye as kin?”

That froze Colm in his
tracks. Damn. The man had taken him in when his family had been
killed during a friendly neighboring reive. Which had turned out to
be less neighborly and more of a slaughter. So to show his
deference, and his appreciation, Colm had taken the clan name
MacRobert, even though he’d been born a Donnachaidh.

“
Good, then it’s settled.
You’re to go and retrieve this lass from her time, and bring her to
ours. If all follows as planned, she’ll be yours to
keep.”

That shocked Colm even
more. His mouth gaped for but a moment, before he ground out, “I’m
to wed?”

“
Is that a problem,
laddie?” When the MacRobert’s voice grew soft, Colm knew he was at
his most deadly, and not to trifle with the man.

"Aye then. You've no
reason to be sour. You've a grand adventure ahead of ye lad. You
have my trust, Colm, and I ken you’ll make me proud.” He patted his
still flat stomach. “Now, let us eat! We’ve a feast to prepare. If
all goes well, we’ll have a wedding to attend.”

Pushing the memory away,
Colm steadied his breathing and stepped forward into the cave. The
old woman was waiting for him. He could
feel
her in there. Caelen followed,
but Colm stopped him with a hand to the chest. Being a couple
inches taller than Caelen helped at times like this.

Caelen looked as if he would argue,
but instead dipped his head in acknowledgement. Colm nodded and
strode into the cave. He refused to look back.

“
C’mon Piper! Dig it!”
Piper Grant landed in the beach sand, flat on her face, with her
arms straight out and missed the ball completely. She was just shy
of six feet tall and she sucked at volleyball. Living in Southern
California, that was akin to blasphemy.

“
Oh hush, you’ll be fine.
Besides you don’t leave until late tonight anyway, right?” Katie
Rush, Piper’s best friend, and the one who’d convinced her to play
beach volleyball, came over to stand at Piper’s side.

“
Yep, I’m taking the red
eye hoping to sleep through the flight. Maybe I’ll catch a break on
the jet lag.”

This was not Piper’s dream vacation at
all. Katie had planned for over a year to take a trip to Scotland
and stay at a sweet little B&B near the Highland Games that had
started this week. But just last week, she’d found out her mom’s
cancer was back, and she would need a double mastectomy. Katie
wanted to stay nearby, just in case. The trip was non-refundable,
though, so Katie had tried to change the date, reservations,
flights, all of it, and unfortunately she couldn’t make it work out
where she wouldn’t take a huge financial loss. Enter Piper. Piper
had been saving for a surf trip to Oahu’s North Shore next fall.
The waves were pretty sweet and would be some of the biggest she
would surf. That vacation money she had saved was the only reason
Piper had been able to afford Katie’s trip. So instead of “Aloha
Hawaii,” it was now “Hello Scotland.”

Piper knew how close Katie and her mom
were, she just hadn’t had the same kind of relationship with her
mother. Piper was not just an only child, but she was an orphan as
well. As an infant, she’d been adopted by an older couple who
couldn’t have children. While she’d never lacked for anything,
they’d never really loved her. She had always felt like their new
pet, rather than a beloved daughter. So often they would travel to
exotic locations for extended vacations, but Piper always stayed
with the nannies. When they weren’t travelling, they were working,
so Piper felt like she hardly knew them.

The only place she’d ever felt at home
was on the waves. Surfing was her passion. After her parents had
died on one of their adventures, she’d spent more and more time out
on the water. Skipping college and living off of the modest
inheritance her parents had left her maybe wasn’t the best career
move for her, but to be honest, she didn’t regret it. After being
orphaned twice, she really just wanted to surf. Piper worked
part-time at her local library on Main Street. It was within
walking distance of the Pier, so Piper could surf as often as
possible. She adored working at the library because the only thing
she loved as much as surfing was reading. And that’s where she’d
met Katie-at the library one year in high school. They’d both
reached for the same book at the same time, and had been best
friends ever since.

“
Thanks again for doing
this for me, Piper.”

Piper waved her words away with her
hand. “You know I don’t mind.” Katie hadn’t stopped thanking her
and Piper was ready to snap at her, except she knew that this
really was Katie’s dream. For Piper? Going to dreary old Scotland
wasn’t her idea of a wonderful time. Castles were damp. The air was
damp. And Piper was already acting like a wet blanket. She mentally
sighed and tried to look at the bright side. Men in kilts. That was
a definite bright side. Men in kilts lifting heavy objects and
tossing them, or men in kilts and archery contests. Maybe a rugby
game. Yeah that improved her mood quite a bit.

“
Piper? Piper? Hello in
there? What has put that goofy smile on your face?” Katie was
waving her hand in front of Piper’s eyes like a
madwoman.

“
Huh? Oh I was thinking of
all the hot kilted men I’ll see there.” Piper winked at Katie and
tossed her a saucy smile.

“
Oh, honey, it’ll be okay.
I’ll email you pictures every day and I’ll get some hot shirtless
guys in kilts to pose for me, and it’ll be great. You can share
them with your mom, who will be
JUST
FINE
.” Piper emphasized the last part,
since she knew that was what was really bothering Katie.

Katie sniffled and smiled at
Piper.

“
You two gonna make out or
what?” a male voice called to them. Piper rolled her eyes at Katie
and they broke apart to glare at Dean. Katie pegged him in the head
with the volleyball as he and his partner Ty sauntered over. “What?
What’d I say?”

Piper looked at Dean, who waggled his
eyebrows in a mock lecherous leer. Rolling her eyes, she got ready
to bail. Giving Katie a quick kiss on the cheek, Piper told her
friends that she had to finish packing. She snatched up her jean
shorts and flip flops, and with a “Later dudes” tossed over her
shoulder, walked back to her car.

Colm was watching the lass walk away
from a beach that looked like none he’d ever seen, and wondered how
the men would allow their women to walk about with naught but
scraps of cloth covering their most intimate places. The vision
collapsed, and Colm was left staring at the hag once more. He
didn’t understand how her magic worked, nor how she created an
image out of nothing but air. He did understand that the lovely
lass was his. Something about her called to him.