“What is this, a jail?” Amanita asked.

Lieutenant James locked the gate behind him. “No, it’s not a jail. Just temporary housing. The locks are just a safety precaution.”

“To keep infected people inside.”

“There are no infected people. Anyone infected would be running around trying to eat you. No, the lock is just to stop anything from getting in.”

“So then we can leave if we want to?” Connor asked.

“It’s a little harder to explain than that, and anyway, Connor, we need you to talk to our doctors. But if you’re wondering if we’re going to hold you captive for ever, the answer is no.”

“What happens when the news finds out?”

“Not my department. I’m sure there will be lots to explain but I’ll let our qualified people handle it. Now, there are cots in the tents, you should get some rest. That big red tent has food and water if you’re hungry. There’s no cell service so you can’t use any phones but if you sign one of the communiqué forms in the red tent we’ll do our best to relay your message to whomever you want.”

“You
are
blocking the calls,” Amanita said.

“We’re being practical and doing our best to contain this.”

“Who are all these people?”

The Lieutenant sighed, seemingly annoyed with all the questions. “Friends, relatives, people who got out early enough, before the bridges and roads were clogged with those…things. I have to go.”

With that he left, let himself out and locked the gate once again.

Connor and Amanita watched the people around them, their skin crawling at the way these people studied them. Everyone was thinking the same thought: Do I know these people? Are they my friends, acquaintances, anyone I’ve seen around town before?

Sadly, nobody recognized each other.

“I want water,” Amanita said, and made her way to the red tent. Inside, people sat at picnic tables and dined on what looked like crackers and soup and small bottles of water. The food was all being eaten out of strange tan bags. A man in fatigues was showing a little girl of about six or seven how to put a small heat pack inside her bag to warm up her food.

“MREs,” Connor said. “Never seen one in real life before.”

Amanita found a giant barrel full of the bottled water and took one out, downed a large gulp and wiped her lips.

Two people came running across the picnic tables and grabbed her, threw their arms around her and began sobbing hysterically.

Connor took a step back, unsure whether he should try and save his friend. The man and woman squeezing Amanita were shaking so badly they almost all fell to the ground in a heap.

Finally, they let go and began rubbing dirt off her face, bending down and kissing her cheek. “We thought you were dead. I can’t believe it!”

Amanita’s mouth opened and hung there as tears streamed down her face. Connor had seen this type of look only on small children who’d suffered a bad injury or were lost in a supermarket looking for their mother. It was the state of someone lost and angry and afraid.

Amanita’s mother hugged her again, babbling her words around her cries of happiness. “We caught a ride into Victorville with a friend.”

“We knew you were going to the party,” Amanita’s father said, his hands shaking. “All the parents in this town know about the Drake’s parties. We’re not stupid, you know. But no one ever gets hurt so we went to have drinks with a friend. He picked us up after you left.”

“You went to smoke weed with your stupid friends while I was running around watching people die! Don’t you know I came home? I came home and you weren’t there, you abandoned me! You hate me and you’ve never cared!”

“That’s not true, Am, we love you. We heard an explosion but we didn’t know what it was. By the time we heard a plane crashed and we tried to get back into town the roads were blocked and then there were those people attacking each other and—”

“You were either too drunk or too stoned to know what was going on. You hate me and I hate you!”

Nobody said anything after that, but all three of them continued to hug. Connor couldn’t blame them. Even if they were bad parents they clearly still loved their daughter.

Despite the dark sky, the residents of the camp could see the massive towers of black smoke spreading out over Victorville, testament to the fire cleansing an entire small town. Many sat and watched in a daze, others touched the pictures of their loved ones on the bulletin boards and prayed for another story like Amanita’s.

But no more came.

Connor found a cot and slept. Amanita slept in the cot next to him. Her parents were not far away. After talking to her for a couple of hours, they relented and let her have her alone time.

At some point in the night, she stretched out her hand. “Connor?”

“Very funny. Will you hold my hand?”

Later on their hands fell apart as they both slept.

They were awakened to shouts and gunfire and men in fatigues rousing everyone from sleep. “Get up, get up!
Move move move!
Make your way to the trucks out front and don’t look back. Leave all possessions and get out now!”

Connor and Amanita jumped out of bed, followed the crowd out of the tent and into the courtyard. More men in uniform directed them where to go with their guns. Amanita’s parents grabbed her and held her hand as they were all led out of the gates and into convoy trucks.

Out near the white science domes marines were firing into the trees. Others were yelling and screaming. A klaxon suddenly sounded and the crowds gathering into the trucks began to scream as well.

“Connor, hurry,” Amanita said, reaching down for him from the back of the truck. Her parents were gripping her shoulders, afraid to let her go.

He turned to look at the fighting across the small field. Hissers were pouring out of the woods. Some of them loping like long distance runners with sprained ankles, others at a full on dash. Bullets ripped into their chest but did not slow them down. One or two caught a bullet in the head and fell, but they jerked so much it was hard to hit their brains.

And then there were the spiders, even bigger and faster than before. No longer just bulbous beasts with a handful of arms and legs, they were now massive monstrosities with hundreds of limbs and too many heads to count. The missiles had no doubt blown the hissers into tiny bits which were picked up by surviving creatures. They scurried forth like tanks and swallowed the young marines under their abdomens, tearing them to bits.

Even as Connor watched, a young man was lifted skyward by one of the hissing spiders. Some ten heads bit chunks out of the boy before dropping him again. And in a second that boy was up, hissing and ravenous for blood.

They bombed the town and still couldn’t stop it,
Connor thought.
It’s too fast and too willing to survive.
If there was any hope, it was possible he carried it in his pocket.

“Connor, get up here!” Amanita struck him in the shoulder, grabbed his shirt and pulled him up.

Finally he obeyed, got his foot on the truck’s bumper and jumped up into the back.

The truck started moving, across the flattened, dead corn stalks and out toward a long winding road that would take them through Victorville into whatever future lay ahead.

As they rode, Amanita put her arm around him and hugged him close. He returned the sentiment and held her tight. Together they watched out the back of the truck as the farm fields filled with running undead, tackling and leaping on marines. Bodies stumbled under gunshots, mists of red puffing in the air as the bullets ripped through veins and arteries.

For the briefest moment Connor thought he saw General Ryan firing his pistol as four creatures slammed into him from behind and tore into his flesh.

The trucks turned onto the winding road and made their way out of sight of the farm. Connor watched as massive spider monsters demolished the two white domes. Farther behind the carnage, Castor’s smoke signals continued to blacken the sky.

Then the truck was speeding down a country road, nothing but woods on either side. The smoky skies turned blue once again, and a deer leapt gracefully behind some trees.

“What do you think will happen?” Amanita squeezed him harder.

Connor looked into her eyes and saw a grown woman trapped in a teenager’s body. He felt the same way. He glanced at her parents and noted the way they also hugged each other.
Yeah, they’ll be alright,
he thought.

He didn’t know what would happen to the world from here on out. Needless to say it would never be the same. Maybe Ryan’s men would stave off the attack and finish off the rest of the monsters. Maybe the military would end up burning Victorville and any of the areas surrounding Castor. Maybe they would never contain this new threat that robbed people of the right to rest, that stole away nature’s design.

He had grandparents in Connecticut, but he had not seen them in a few years despite the calls on his birthday and holidays. He had an aunt and uncle in Florida, and two cousins who were both years older than he was. He didn’t know them that well. He had second and third cousins as far away as Portugal, but he didn’t know how to get in touch with any of them—the phone numbers had been in his house, which was now just cinders.

He rubbed the flash drive in his pocket one last time. It had gotten wet and might not even work, but perhaps even a wet drive could be salvaged. It was worth a shot. No, it was worth everything, and he sure as hell was going to give it his all.

He remembered the name of Nicole’s father’s biotech company in San Diego:
Aminodyne.

He would jump out of the back of the truck and run. On his bad leg and with no idea where he was, he would run and find his way to Nicole’s father.

The two marines sitting in the back of the truck, keeping a watchful eye on these fine Castor folk, might get up to give chase, but he doubted it. There was too much fear and exhaustion written in their faces. Besides, Am would stop them even if she didn’t understand why he was running, he knew she would.

She was still waiting for an answer.

“I think things will get a lot worse before they get better.”

The truck continued on. The sun shot pink bands of light through the summer treetops and gave the birds a reason to sing.

Eventually, the truck slowed, and Connor stood up. 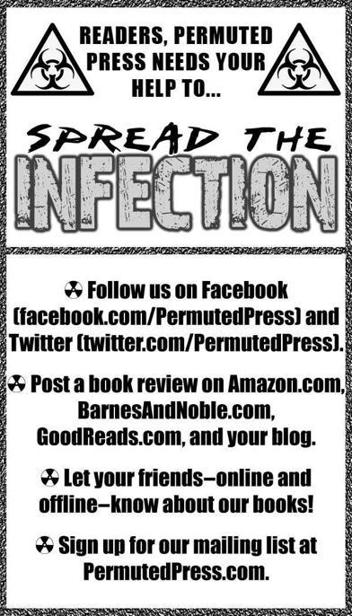 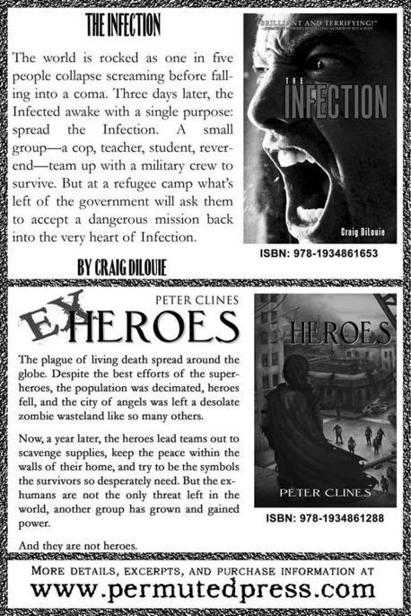 The Scandal Before Christmas by Elizabeth Essex
The Pumpkin Thief: A Chloe Boston Mystery by Melanie Jackson
The Gilded Cuff by Smith, Lauren
Diplomatic Immunity by Lois McMaster Bujold
They Found Him Dead by Georgette Heyer
The Sylph Hunter by L. J. McDonald
The Secret Rooms: A True Gothic Mystery by Catherine Bailey
The Hundred-Year-Old Man Who Climbed Out of the Window and Disappeared by Jonas Jonasson
Shades by Cooper, Geoff, Keene, Brian
The Gentle Wind's Caress by Anne Brear
Our partner