Read Honeymoon To Die For Online

Honeymoon To Die For 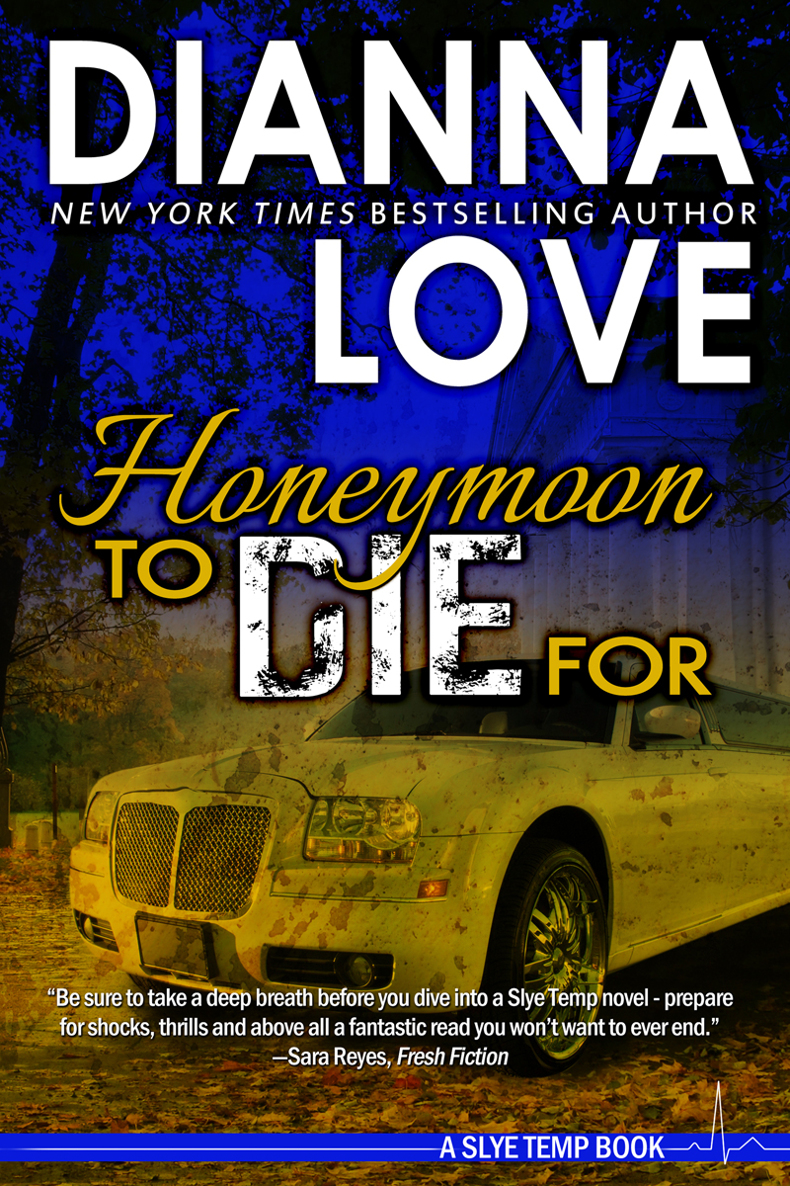 About
Last Chance To Run
:

"LAST CHANCE TO RUN cleverly builds suspense until the nerve-racking conclusion...Satisfaction is guaranteed when Dianna Love writes a story."

"LAST CHANCE TO RUN…reminded me of Cinderella.  Well, if Cinderella was on the run from a maniac killer and Prince Charming wielded a gun and flew a plane. Great read.  Check it out!"

"Brilliant!! Now THIS BOOK is what I LOVE about Romantic Suspense; a gritty suspenseful story AND enough steam to make me squirm (in a GOOD way :) )."

"Dianna never disappoints! … would have give it a 10 if they would let!!! Very enjoyable read, can't wait for the next one :-)."

"
This is a lively and action-packed book, full of energy, danger and romance. The love story is tender … the action plot will satisfy the reader's thirst for danger.”

“
I fell in love with the characters in this book. This story is chock full of action, white hot romance, shocking twists and intelligence.”

Honeymoon To Die For
(Book 3) 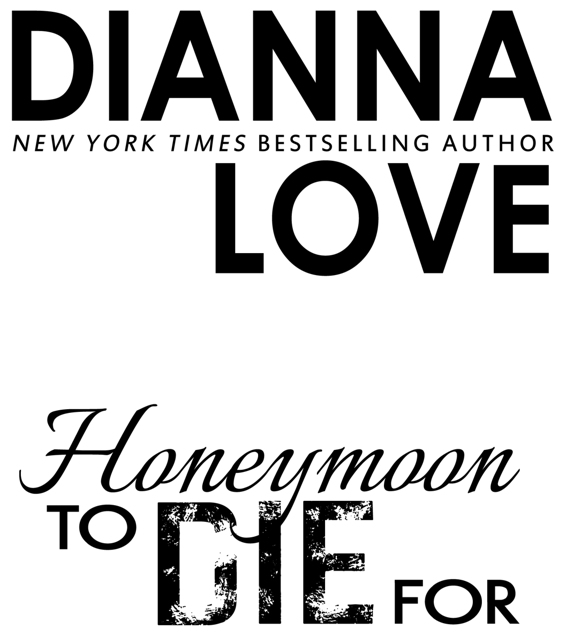 No part of this work may be reproduced in any fashion without the express, written consent of the copyright holder.

This book is a work of fiction. All characters and events portrayed herein are fictitious and are not based on any real persons living or dead.

For Steve Doyle who is always willing to show me how to save the world.  Thank you for the many times you’ve stood guard over us.

No author creates without a great support team and I have the best, starting with my husband, Karl, who has always believed in me and makes it possible for me to do what I love.

Steve Doyle has spent many hours sharing his vast knowledge gained as a Special Forces soldier, especially when it comes to all forms of weapons.  Additionally, he reads every story and his feedback is a tremendous help.  Any mistakes made or adjustments for fiction are my own, because every one who helped me went above and beyond the call to give me the best information.

One of those people who helps me ferret out important details is my assistant and intrepid traveling companion, Cassondra Murray, who is in the trenches with me every day whether it’s reading early rough drafts or proofing final edits or juggling the massive amount of office work that happens behind the scenes of producing a book.

Much appreciation goes to award-winning author Mary Buckham (
www.MaryBuckham.com
) who brainstorms with me during the year when she isn’t writing on her own Invisible Recruit series.

Thanks also to enthusiastic early reader Joyce Ann McLaughlin who makes me smile with her fun comments and keeps me straight with her sharp eyes.

Judy Carney’s first copy edit read catches all those things you scratch your head over not seeing and she smiles the whole time, making it a pleasure to work with her. I want to shout out to Hope Williams who is an early reader as well when I need it.

Thanks to Kim Killion for another rockin’ cover and to Jennifer Jakes for formatting the pages and exorcising gremlins.

I want to give a special thanks to Sara Reyes of
Fresh Fiction
for all that she does for readers and authors everywhere and for the awesome cover quote. Thanks also to Barbara Vey (
www.BarbaraVey.com
) who connects authors and readers everywhere she goes.  Love and appreciation goes to my new
Dianna Love Street Team
who support me all through the year.  If you’re interested in joining my team, just stop by my Facebook page.

Thanks also to Leiha Mann, Su Walker and the RBLs for supporting all authors!

I love to hear from readers. Email me at
[email protected]
, or message me on FACEBOOK at
Dianna Love Fan Page
and
Dianna Love Street Team
page
or by snail mail at Dianna Love, 1029 N. Peachtree Pkwy, Suite 335, Peachtree City, GA 30269.

To collect FREE “signed” glossy cover cards of
Honeymoon To Die For
and Dianna’s other books, please visit
www.KeeperKase.com

Predators inside the prison yard grew tense and quiet. They’d caught the scent of a weak prey—the overweight, middle-aged prison guard named Boyd. Sweat streamed down his face and his tobacco-brown skin had lost two shades.

Standing alone with arms crossed over his orange jumpsuit, Ryder Van Dyke kept an eye on Boyd
and
the other twenty Atlanta Federal Penitentiary inmates milling around during their hour of yard time.

The standard mix of killers, rapists and thieves.

Ryder had never harmed a woman. He
had
stolen and killed, but only to protect the innocent. Actions he’d taken to preserve national security while on black ops missions for the Army before he was honorably discharged.

Operations that had resulted in saving thousands of lives.

Had that weighed in his favor when someone framed him for murder?

Hell, no. In fact, being an elite marksman—a sniper—was one piece of the circumstantial evidence that had convicted him. But he had a two o’clock meeting this afternoon with his attorney that he hoped meant positive news.

He eyed the guard and the players in the yard.

Ryder couldn’t ask to go back inside early. Not at this point. If the guards picked up on something in the yard after he left, the other inmates would accuse
him
of snitching and turn on him even though he had no idea what was going down.

No, he was stuck until they were all called inside.

Survival to this point had been iffy. He’d spent the past four months, twenty-nine days and thirteen hours in this shithole. Given a choice, he’d have taken a bullet between the eyes instead of getting locked away in a space so small it would drive a dog crazy. He was lucky to have survived this long, and almost hadn’t that first week.

The predators, led by the Beast, had turned on Ryder the second day.

Facing an undetermined stay here, he’d had only one option to stay alive. Take on the meanest bull in the yard—the Beast—and bust his balls, if he could, to make the rest think twice before testing him.

Ryder had ended up taking on three, and had hobbled away with cracked ribs, a bruised ball of his own, and peeing blood.

But he’d been upright.

The other three had left on stretchers.

Cost him thirty days of solitary confinement in the SHU, Single Housing Unit, aka the Hole.

The space would have been suffocating for an hour. He’d touched two walls when he stretched his arms across the space and the COs, Corrections Officers, controlled the fluorescent light that stayed on nonstop. Seconds turned into endless minutes that blurred into insanity while he waited to get out. His palms dampened just thinking about that thirty days.

When Ryder’s breathing hitched, he ran his hand over his forehead to wipe away perspiration that stung his eyes. He drew a deep lung full of air.
Stay calm.

In the past, he’d adjusted to any situation, but there was no way in hell he’d ever get used to being locked in a cage forever.

Movement in the yard tapped at his awareness. Shuffling around was normal. Choreographed moves were not and, all at once, it seemed as if everyone had new dance steps.

The predators were twitching.

Fifteen feet away, Boyd panted in between wheezes from his two-pack-a-day habit. With a cool, late September breeze scurrying through the dirt exercise area, the temperature wasn’t causing the excessive sweat that soaked Boyd’s steel-blue uniform. Did he have the flu? He fisted his left hand then opened his fingers as if trying to work out a muscle issue before he gripped his rifle again.

Now Cherry Man turned toward Boyd. Bad sign that. Wide as a refrigerator, if they were produced in the color of burned oil, and just as hard to knock down, Cherry Man had been convicted on six brutal rape accounts. He gave a tiny head nod to the Beast.

His full moniker was the Rajun Beast. He’d climbed out of the Louisiana swamps and killed a two-hundred-pound man with his bare hands during a botched robbery attempt.

Rumor was, that hadn’t been his first B&E
or
his first kill.

Cherry Man and the Beast moved slowly toward Boyd.

The rest of the jackals eased along behind their vicious leaders. All but four inmates who migrated away from the pack to the opposite side of the yard. What were they up to?

The Beast wouldn’t be thinking to grab a sick guard’s rifle and shoot his way out. He was a homicidal maniac with plenty of self-preservation instinct. Six weeks ago, Boyd had reported the Beast for harboring a homemade weapon. The Beast had been dumped in the Hole. He had the ruthless patience of a crocodile, waiting for a chance to make Boyd pay, and this was shaping up to be the perfect opportunity.

Fuck. Ryder had to keep his nose clean so he didn’t make it any more difficult for the attorney hired by Slye Temp, his former employer, to get his ass out of here.

He still couldn’t believe Sabrina Slye and her team of operatives continued to stand behind him even with a potential murder conviction.

His family sure as hell hadn’t.

Except for his brother, Terrence, who’d visited three times and offered to bring in Van Dyke attorneys. Accepting that would have just put Terrence at further odds with their father, the one man Ryder did not want to owe.

Besides, aid bought with Hubrecht Van Dyke’s checkbook would only play into the prosecutor’s case against Ryder.

Smart money said to keep as much distance from the Van Dykes as possible. That same smart money also said Ryder should stay away from Boyd, who was looking worse by the minute.