Mr. Patterson waved at them excitedly.
“Why, hello, Denis! What brings you to this side of the literary
world? Have you come to buy a book at last? There’s a great new
section on adventure books for boys over there—” He flung his long
white beard over his shoulder and pointed to a tall book shelf to
his left.

David smiled uncomfortably
and scratched the back of his neck. “Uh…no, Mr. P—but thanks
anyway. I’m sure they’re all…swell.” David turned to Kara and spoke
with the side of his mouth. “He’s still calling me
Denis
.” Kara covered her
mouth and laughed.

Mr. Patterson halted and
watched Kara warily. “Clara? Why are you holding the
mad-bat
? Did something
happen? Were you engaged in a firsthand combat with a psychotic
customer?”

David snorted. “The
mad-bat? Seriously? Sounds a little
batty
to me—”

Kara kicked David in the shin and hid
the baseball bat behind her back. “Uh…nothing. I was just…cleaning
it.” She sauntered over to the counter and dropped the bat behind
it.

“
Actually, Mr. P,” said
David, “I came to see if Kara could get the rest of the afternoon
off.”

“
I see.” Mr. Patterson eyed
David suspiciously for a moment. His clear blue eyes peered from
under the folds of hundreds of wrinkles. He pursed his lips and
scratched his head. “Well, I don’t see why not. I think Clara’s
done quite enough today already. You can go with Denis if it
pleases you.”

Excitement rushed through Kara’s
breast. She dashed back. “Really? Thank you, Mr. Patterson. You’re
too good to me.”

“
Nonsense.” Mr. Patterson
waved a dismissive hand. He stood silent for a moment, his face
perplexed. “Dear me. I can’t remember what I was about to do just
now…my mind seems to wander on its own as I get older. A very
strange business, this old age.” His blue eyes glazed over, and he
stared into space.

Kara peeked at David and
then back at Mr. Patterson. “Mr. Patterson—if you want, I can stay
and help you find what you were looking for. Really it’s fine. I
can go to the movies another time. I’m sure
David
won’t mind.” Kara gave David a
sidelong glance.

“
No, no. That won’t be
necessary, my dear. You go on now with David. I’m sure whatever it
was…it’ll turn up soon enough.” Mr. Patterson waddled over behind
the counter. He slid open the glass compartment door from which he
pulled a fist-size crystal ball. Specks of light reflected off his
face, and he gazed at it intensely without blinking. He held it
with both hands and was still.

“
Mr. Patterson? Are you
alright?” asked Kara. And when he didn’t answer, she asked again.
“Are you feeling okay? You seem a little pale. Can I get you a
glass of water?”

“
The guy’s a little spaced
out…if you know what I mean,” whispered David beside her. He
whirled his finger at the side of his head and opened his eyes
wide.

Kara ignored David and studied the old
man. She lowered her voice. “He does that sometimes. Whenever he
stares into one of those crystal balls—it seems he forgets the
world around him. It’s as if he’s off somewhere else. It’s
pretty…freaky.”

“
Maybe he’s got the early
signs of Alzheimer’s.”

Kara shook her head irritably. “No, he
doesn’t. He’s just…old. I’d like to see you at his age—see how you
would handle yourself.”

“
I’d be the sexiest old
fart in town, baby. All the single senior ladies would be chasing
me with their canes. I’d be awesome.”

Kara rolled her eyes and laughed.
“You’re such a moron.” She watched the old man somberly. It pained
her to see him so distraught. “I hate to leave him here like this,
though. What if someone comes in…and he’s still staring into that
ball, and he doesn’t answer them? They might call the police or
something. What if they lock him up?”

David squeezed her shoulder gently.
“Don’t worry. The old dude had this shop long before you came
along. I’m sure he’ll be fine. Let’s go. The movie starts in half
an hour.”

“
I hope so.” Reluctantly,
Kara turned around and followed David towards the door. “So… what
movie did you want to see? Please don’t say another zombie film. I
think I’ve seen enough blood and guts to last me a
lifetime.”

David cracked his knuckles and
grinned. “I was thinking the new—”

With a crash, Mr. Patterson’s crystal
ball exploded into a million pieces as it hit the floor. He ignored
it and ran wildly towards them. His white hair bounced from the top
of his head, and Kara couldn’t help but be reminded of the little
luck-trolls with wispy purple hair she used to collect. He waved
his hands frantically in the air. “You cannot leave. The darkness
comes. The legion needs you. The mortals are in danger!”

David whistled softly. “Whoa…and you
said the old fart wasn’t nuts? He just poured a bucket of crazy on
us—”

“
Hang on,” said Kara,
cutting him off. “Something’s wrong. I’ve never seen him so
agitated.”

After a moment, Mr. Patterson stood
before them. His eyes were wide and crazed. He pulled at his hair
with trembling hands. “I have seen it! It is time. You must go
back!”

“
Time for what? You’re not
making any sense.” Her body stiffened. What if he had gone mad? She
would have to look for another job. A lump formed in her throat.
She looked over at David who raised his brows.

Mr. Patterson paced on the spot. “The
time is now. You must prepare yourselves. They are waiting for you.
You must leave the mortal world.”

Kara wiped the sweat from her forehead
with her hand. It was getting worse by the minute. “Who’s waiting?
I don’t understand. Mr. Patterson, you’re not making any
sense—”

“
Keys! I almost forgot!”
The old man rushed over to the counter, rummaged through a drawer,
and rocketed back. Two golden key cards glimmered in his hands. He
held them up to Kara and David. “Here—you must take your cards. You
cannot enter level five without them.”

David laughed and took one of the
keys. “Thanks, Mr. P—maybe you should sit down and relax a little.
Whoa…is this real gold?”

Kara shoved David aside and shook Mr.
Patterson gently by the shoulders. “Mr. Patterson. You’re scaring
me. I think you need to lie down and have a glass of water. Did you
eat something today?”

Mr. Patterson nodded impatiently.
“Yes, yes, of course.” He grabbed her hand and placed the other
golden key card in her palm. He curled her fingers around it. “Kept
it safe. You will need it. It’s only a matter of seconds
now.”

Kara blinked the moisture from her
eyes. “Okay. That’s it. I’m going to lock up and take you home. I’m
not going with David anymore.”

She started for the door, but Mr.
Patterson grabbed her arm forcefully and pulled her back to face
him.

“
No! It’s happening. You
cannot go anywhere. You must stay here. Both of you.”

Kara and David shared a look. She
realized this was a lot worse than she had first anticipated. She
would have to call someone. She decided to phone her mother. Her
mother would know what to do.

“
No!” Mr. Patterson grabbed
Kara by the elbow and steered her back to face him. “There isn’t
time. It comes now. Prepare yourselves.”

“
What’s coming?” laughed
David, playing along. “The darkness? Will it give us more gold
cards?”

The old man backed away from them
suddenly and pointed towards the ceiling. His eyes were wide in
fear. “The earthquake,” he whispered.

Kara frowned. “The earthquake? We
don’t get earthquakes here—”

As if on cue, the book-shelves started
to rattle. The ground shook and vibrated angrily. An enormous boom
thundered around them, as though the earth itself had split open.
Book-shelves swayed dangerously, spilling out their entrails. Books
toppled over and crashed onto the floor around them. The walls
cracked, revealing large gaping holes. Chunks of plaster cascaded
down from the ceiling and covered Kara and David in a blanket of
white dust. Kara coughed as the powder burned her
throat.

“
Kara! This way!” David
yanked Kara by the arm and pulled her towards the counter. They
ducked and flung themselves against the wood frame to protect
themselves from the falling rubble as best as they
could.

Kara looked around nervously. “Where’s
Mr. Patterson?” she shouted over the groans and creeks of falling
debris.

A huge chunk of concrete crashed on
the floor, just inches away from them.

“
I don’t know!” yelled
David. He inspected the ceiling for more falling boulders. “The
ceiling is coming down. We’ll get crushed if we stay here. We have
to get out of here now!”

Kara nodded and followed David out
from behind the counter. They ducked and jumped out of the way of
broken shelves and dangerously sharp chunks of rock—

Half the ceiling came down behind
them. The counter disappeared under an avalanche of
wreckage.

Kara watched David’s lips move, but
she couldn’t hear what he was saying. All she could hear was the
hammering of her heart and the thundering crash of falling debris.
He pointed to the door and grabbed her hand.

Desperately they ran for the door. It
was near. They were almost at the threshold—

An earsplitting crack vibrated around
them.

The remaining ceiling tumbled
down.

Kara’s last image was of a brick wall
crashing on top of her. A tremendous weight pressed on her chest,
and then her consciousness left.

Kim Richardson is the
author of the SOUL GUARDIANS series. She was born in a small town
in Northern Quebec, Canada, and studied in the field of 3D
Animation. As an Animation Supervisor for a VFX company, Kim worked
on big Hollywood films and stayed in the field of animation for 14
years. Since then, she has retired from the VFX world and settled
in the country where she writes fulltime.

The fifth book of the Soul
Guardians Series - summer 2012 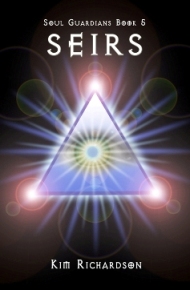