Hot in the City 2: Sin City 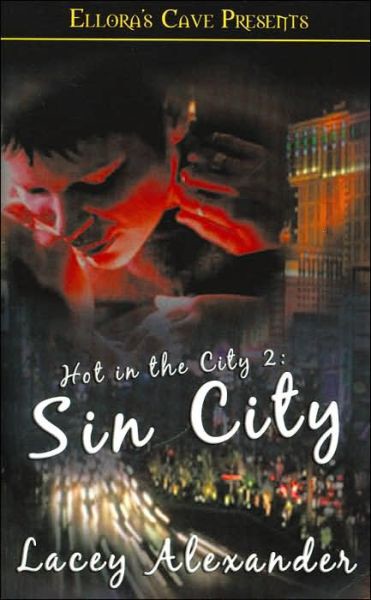 Diana Marsh had just switched off the light next to her bed when the phone rang. She reached out in the darkness and put the receiver to her ear. “Hello?”

“Hey, it’s me.” Marc Davenport, her work associate and long-distance friend. Or was he more than a friend?

Their office-to-office work calls had gotten longer and more flirtatious recently, and hearing his voice made her smile in the dark. “Hey.”

“You sound sleepy—were you asleep? Damn, what time is it there? I totally forgot about the time difference.”

“It’s…”—she switched on the light and sought out her bedside clock—“…just after eleven, but that’s okay. I only went to bed a few minutes ago.” In fact, she’d decided to turn in after she’d given up on him calling, thinking maybe he’d decided it was a bad idea.

“Are you sure, sweetheart?”

So simple, one little word—
sweetheart
. Despite herself, just the sound of the endearment, delivered in his rich baritone, made her breasts ache a little, her pussy tingle with a hint of awareness. “Yeah, I’m sure. I want to talk.”

It was a first for them—a call outside the office. But the workload had been light today and a phone call to ask her opinion on the wording of an entry in the fall catalog had turned into a phone call about a hundred other things: movies they’d seen lately, music they listened to, Marc’s hopes of moving to Europe for a while, and even the guy Diana was currently seeing—although she’d tried to steer away from that topic quickly. Before they’d finally hung up, Marc had said, “Hey, why don’t I call you later tonight? We can talk some more.”

She’d agreed, thinking it was safe, harmless. Just a little fun, just talking with a friend—a friend that sent frissons of heat echoing through her veins more and more lately.

But she couldn’t think about that—in fact, she had to
stop
those feelings before they got out of control.

Because Diana was done being the black sheep of the family, finished being the Class “A” Bad Girl she’d been her whole life. She was cleaning up her act, playing it safe for a change.

Surely a late night call from a…
friend
wouldn’t interfere with that?

“I thought maybe you’d forgotten,” she said, “or decided not to call.”

“No way, sweetheart—you know I love to hear your pretty voice. I’d have called earlier, but I just got home.”

“I hope you weren’t at the office all this time.” Marc worked at the company’s corporate headquarters in
Las Vegas
, where she calculated the time to be after eight.

“No, nothing like that. I just went out with some guys after work. A long happy hour.”

“Sounds fun.” Diana didn’t
do
happy hour anymore and the pleasure-seeking part of her soul experienced a small bout of envy.

“I wouldn’t have called, though, if I’d known you’d already put on your jammies and gotten all tucked in to bed.”

She laughed. “I’m not exactly four years old, you know. I don’t have a strict bedtime.”

“And just what does
that
mean?” she asked in a playful tone. Despite talking on the phone a couple of times a week for the past year, not to mention sending lots of e-mail—some of it work-related, some of it chatty—she and Marc had never met.

“I’ve seen your picture on the company website, sweetheart,” he admitted. She’d seen his, too, and found him utterly hot—the best-looking thing in a suit and tie she’d ever laid eyes on.

“And…” She could almost hear his playful grin. “I liked what I saw. A lot.”

“Your gorgeous brown hair with just a hint of auburn, your hazel eyes and creamy skin, and that sexy pinstripe suit you were wearing.”

She let out a small giggle. “You can’t even see my suit below the shoulders in that picture. And besides, I didn’t know pinstripes were sexy.”

“What can I say? Professional women get me hot.”

Diana didn’t reply, just sat up in bed a little and let
herself
get hot at the knowledge that she wasn’t the only one caught up in a bit of lust here.

“Just please tell me,” he said, “that the skirt is as short as I like to imagine it is.”

She let her voice go a little husky. “Uh, yeah, it is. I’m a short skirt kinda girl.”

But I’m a
good
girl, too
, she reminded herself. Marc had the ability to make her forget herself, the self she intended to be from now on.

“So what kind of pajama girl are you? What are you wearing right now?”

She sucked in her breath—this was starting to get steamy. And was about to get even steamier, she had a feeling. “The white baby-doll tank and panty set from the catalog,” she said, unduly gratified to know he’d be able to picture the skimpy outfit with ease. They were employed by Adrianna, Inc., a maker of fine lingerie and loungewear, and Marc worked on the team that designed and produced the quarterly catalogs.

“Damn, honey, I need to get one of those cell phones that let you send pictures back and forth.”

She laughed. “What makes you think I’d send you one of me in my little nighties?”

His chuckle was rich and full-bodied. “Well, maybe you wouldn’t, not yet. But I bet I could talk you into it.”

“That’s for me to know,” he said, then shifted the subject back to her baby-doll tank set. “So, tell me, does the ultra-soft cotton we describe in the catalog feel as good against your skin as we promise?”

She smiled to herself. “Mmm hmm. Very soft and silky, just like the copy says.”

“And do your nipples show through the white?”

Her breath caught and her cunt turned restless, tickly. “I’ll…have to check on that,” she said, aware her voice had come out more whispery than she’d intended. Getting up, she walked to her dresser and glanced in the mirror. Two dark, sexy shadows puckered against the fabric; her breasts turned heavy. Returning to the bed, she picked up the phone, bit her lip slightly, then answered. “Yes, quite clearly, in fact.”

She wished he could see the come-hither smile she knew she wore. “Well, if I do say so myself…”

He offered a light laugh before getting sexy again. “Are your nipples hard?”

Another quick wave of heat. “Um, yeah. They definitely are.”

“And your pubic hair? Does it show through the white cotton, too?”

What a wicked boy, she thought. And what a wicked girl she was, as well. For the moment, she’d given up trying to fight it. “I don’t
have
any pubic hair. I keep it waxed off.”

A slightly stunned silence met her ear and she enjoyed it immensely. “All of it?”

“God, sweetheart, you just made my dick hard.”

Her voice came breathy, hot. “And you just made my pussy wet.”

Another tense silence—but this one was pure heat, shared across a distance of over two thousand miles.

“Wrap your hand around your cock for
me
.”

A few seconds passed and she imagined him unzipping, reaching in his underwear. She envisioned a big lovely shaft, thick and straight as a pillar of stone. “Okay,” he finally said.

“You’re doing it? Touching yourself?”

“I wish
I
could be the one touching you,” he whispered. “Do you know how many times I’ve thought about that?”

No, she didn’t, but she liked the sound of it. “Tell me.” She gently stroked her middle finger over her damp clit. Sensation radiated outward.

“What, baby? Tell me about your pussy. Tell me all about it.”

“Are your panties on or off?”

“Wait a minute.” Biting her lip, she lay the phone on the covers bunched next to her and pushed the white cotton undies down over her thighs, knees, to her ankles. “Okay, they’re gone.”

She did, and a rush of delight flowed through her when the air from the ceiling fan cooled her wet inner flesh.

“Now tell me how it looks. Describe it to me.”

Diana lifted her tongue to the roof of her mouth as she glanced downward. “It’s very…open,” she began, then swallowed, her arousal nearly getting the best of her. She’d done a lot of wild things in her life, but she’d never had phone sex, and something about it felt much more intimate than she would have expected; he seemed so close, right next to her ear. She wished he really
were
there, right beside her in bed.

“Pink,” she whispered. “There’s a lot of pink, and…my clit…my clit is all swollen, stiffened, wanting to be stimulated.”

She heard him let out a heavy breath. “Don’t make it suffer, sweetheart. Keep touching it. Glide your pretty middle finger over it. Are you doing it? Stroking it for me?”

“Are you stroking your cock?”

She went quiet for a moment, trying to find enough breath to ask him some of the same things he’d asked her, all the while caressing her pussy and imagining him with his pants undone, his shaft in his fist. “What are you wearing?”

“Good—that’s how I was picturing you. Now tell me what your cock looks like.”

His breath had turned ragged. “It’s so big for you, sweetheart.”