Read How to Score Online 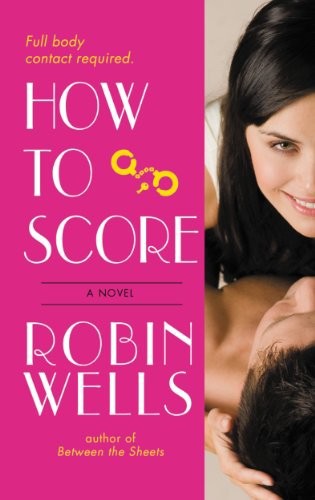 Forever is an imprint of Grand Central Publishing.

The Forever name and logo is a trademark of Hachette Book Group, Inc.

The sheets rustled and the mattress bounced again as Sammi flipped over. Chase opened his lids to find her gazing at him.

“I bet you wish you’d never met me. Then you wouldn’t have a concussion, and your wallet wouldn’t be all chewed up, and… ”

Aw, hell. He couldn’t let her think he was rejecting her because of a few klutzy moves. Convincing her she wasn’t bad luck was the whole reason he was coaching her. He rolled onto his side and touched her hand. “If none of that had happened, you wouldn’t be here.”

He should have looked away, but his gaze seemed Super Glued to hers. Electricity hovered between them like thunderclouds, hot and heavy and highly charged. Then his mouth was on hers and lightning was striking all over the place.

Oh, God, her lips were soft—soft and plump and hot. She moaned against his mouth…

Praise for
Between the Sheets

“Has Southern heat, secondary characters who will steal your heart, and a hero and heroine who deserve their happy ending.”

“A delightful mix of humor and love—romantic comedy at its best!”

“
Between the Sheets
is warm, romantic, humorous, sexy, and just plain fun.”

“
Between the Sheets
is a fascinating contemporary romance.”

“Romantic comedy at its best… exceptional storytelling, writing, and characterization make this a page-turning read.”

“[A] madcap and enjoyable romantic comedy.”

“
Between the Sheets
is a splendid and comical read that had me laughing out loud numerous times.”

To Ken, the love of my life; to Taylor and Arden,

two mobile pieces of my heart; and to

With special thanks to Dick for being the best cowboy lawyer ever, and to Taylor, Jeff, and Matt for the tour of Tulsa.

I
only stayed out until nine, but Mother was in a tizzy when I got home,” Horace whined. “She said she’d carried me for nine months and suffered through sixteen hours of labor, and I was a terrible son because I didn’t want to stay home and keep her company.”

Chase Jones rubbed the bridge of his nose as he listened to Horace’s nasal whine through his brother’s cell phone, wondering, for the umpteenth time, how Luke managed to listen to losers like this all day long without going bonkers. More to the point, how was
he
going to listen to them for the next six weeks? He must have been out of his mind, telling Luke he’d fill in for him as a life coach.

“I tried to explain to Mother that I needed some time to myself, just like you said, but she wouldn’t listen.” Horace’s voice trembled.

Shaking his head in disgust, Chase gazed down at the open file sprawled on the dining table of his Tulsa apartment. According to Luke’s notes, Horace was forty-four years old, lived with his mother, and never made a move without her approval.

“I just don’t know what to do, Coach,” Horace whined.

How about growing a pair?
Unfortunately, the words weren’t on the list of conversational prompts his brother had left for him to use. Instead, the page was filled with namby-pamby, touchy-feely phrases such as
“How did that make you feel?”

Chase stifled a groan. Feelings made people act irrationally; he’d seen plenty of proof of that growing up, and as an FBI agent now, he saw more proof every day. In his opinion, the world would be a better place if everyone kept a lid on the primal stuff and just stuck to logic. His brother’s let’s-talk-things-out, tell-me-how-you-feel approach only made things worse.

This right here was a prime example. Horace had spent more than four decades wallowing in his feelings, and it had gotten him nowhere. The poor sap needed his butt kicked off the pity pot and into action. A few weeks of Quantico-style basic training and Horace would be a new man.

Chase was itching to tackle the project, but he’d promised to follow his brother’s instructions. With a sigh, he swallowed his distaste and forced out the lame-assed question “How did your mother’s reaction make you feel?”

“Frustrated,” Horace said woefully. “And upset. Like I don’t have a life of my own.”

That’s because you don’t,
Chase thought dourly. He glanced back at his brother’s notes.
Follow up with an empathetic statement, such as “Those are understandable emotions.”
Hell. Much more of this and he was going to gag.

“So, Coach, what should I
do?
” Horace whimpered.

Chase had a few suggestions, but none of them would have met with his brother’s approval. He scanned the conversational prompts.
When he asks you a question, turn it around and make him answer it himself.
“Well, Horace, what do you want to do?”

Actually, Horace, old buddy, you didn’t hire me; you hired my younger brother, Luke. I’m an FBI agent, not a sports psychologist turned life coach, and I don’t buy into this nursemaid crap. I’m filling in for Luke for a few weeks because thanks to me, he witnessed a mob hit and is temporarily in the Witness Protection Program. But I can’t tell you that, Horace, my man, because you’re such a quivering mass of jelly-bellied insecurities that you’d never believe it, and you’d think Luke was giving you the brush-off, and if you thought that your life coach was rejecting you, you’d feel even more inadequate than you already do, and you’d probably never seek help again. Which is why I’m sitting here like an idiot, wasting a perfectly good Thursday evening, impersonating my brother on the phone.

“So what do you think I should do?” Horace whimpered.

Besides grow some gonads? Chase blew out a sigh and forced his gaze back to the list.
Ask him to visualize his ideal life
. “Let’s talk about what you’d like your life to be like.”

“You mean—if I were a superhero or something?”

Chase rubbed his forehead. “Why would you be a superhero?”

“Because I love comics, remember?”

“Oh. Yeah.” This was the first Chase had heard of it.

“Superheroes can do anything, and they’re never afraid.”

Chase wasn’t sure just how sick this dude really was, and he damn sure didn’t want to encourage him to see if he could fly or something. “For the purposes of this exercise, Horace, you don’t have any superpowers, but you’re the kind of guy you want to be, and everything in your life is just like you want it. I want you to describe it to me.”

“Oh, golly—I don’t even know where to start.”

How about with dropping the word
golly
from your vocabulary?
Man, this guy was pathetic. “Let’s start with your mother. If everything in your life was ideal, would you still live with her?”

“Oh, no,” Horace said emphatically. “I’d have my own place.”

Press for details,
the notes said.
Engage his senses
. “Can you visualize it?”

“Come on, Horace—work with me here. What color would you want the walls to be? White? Gray? Beige?”

“Red.” Horace’s voice perked up. “A bright, shiny red—Corvette red. Mother
hates
red. And I’d have a black leather couch, and black satin sheets on my bed, and a huge TV, and I’d have the remote all to myself. And there would be no knickknacks or dolls or doilies anywhere in the place.”

Now they were getting somewhere. Chase leaned back in his chair and stretched his long jeans-clad legs out in front of him. “Good,” he told Horace. “What else?”

“I’d have Cheetos in my pantry, and beer in my refrigerator.”

“And I’d have pictures of cars hung all over the walls, and maybe a bearskin rug on the floor.” Enthusiasm fueled Horace’s thin voice. “It would be a real bachelor pad.”

Chase looked around the large room that comprised the dining, living, and kitchen areas of his apartment. His place was a real bachelor pad, but it damn sure didn’t look anything like what Horace was describing. His walls were plain vanilla and completely devoid of pictures. His floor was covered with ordinary tan carpet, and his furniture was some basic, sturdy stuff that he’d picked out during a twenty-minute visit to a furniture store seven or eight years ago. His gaze rested on his giant plasma TV against the central wall. The TV was the only thing in the place he’d recently purchased, and he wished he hadn’t done that, because it was indirectly the reason his brother was in hiding and he was here on the phone with Horace.

“If I lived by myself, I’d drink milk straight from the carton,” Horace continued. “And I’d put my feet on the couch whenever I felt like it, and I’d stay in the shower until all the hot water was gone.”

Wow. Let’s not get carried away, Horace, my man
. “Anything else?”

“Yeah. I’d play my accordion whenever I wanted, and I’d play the kind of music
I
like to play.”

“Yep. But Mother only wants me to play organ-grinder music.”

“Well… ” Horace drew a deep breath, then lowered his voice into a bad imitation of Snoop Dogg:

I went to the store to get some Cheese Whiz,

and I ran into a pretty girl named Liz.

Would you like to shoot your cheese on these crackers of mine?’

Chase let out a loud snort.

“I told you it was awful,” Horace said mournfully.

“But it wasn’t meant to be funny.” Horace’s voice grew small and wounded.

Uh-oh
. Whatever you do, don’t hurt his feelings,
Luke’s notes said. “Well, funny is good.”

“Sure. Everyone likes a laugh. And women love a guy with a sense of humor.”