Read I Came Out for This? Online

I Came Out for This? 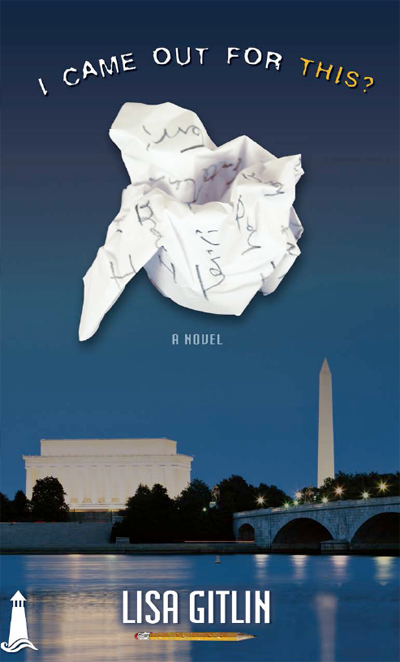 I Came Out For
This
?

This one's for you, Dadâ

I Came Out For
This
?

All right, let's get the particulars out of the way for all you attentionally challenged freaks: My name is Joanna Kane. Jewish, 47, living in Cleveland, Ohio, which will prejudice you against me immediately because what's Cleveland, Ohio? A loser city. When you say you're from Cleveland, Ohio, people look at you with no expression, trying to think of what to say. Anyway, Joanna Kane, forty-seven, Jewish, living in pit stop on the lake. Professional fucking writer. Two parents, four siblings, no children because I never had a boyfriend or husband and I'm gay and was too stupid to come out until I was forty-five years old, so now I'm one of those aging pathetic spinsters that people feel sorry for, living in Cleveland, Ohio, that everyone laughs at. Typical history of troubles for a gay Jew. Was in a loony bin at age 14 for six months because I set fires to dumpsters and told my social worker at Child Guidance Clinic that I was going to blow up a gas station, so she put me in a bin. Not really crazy, just hiding my homosexuality and none of the stupid mental health people could figure it out. Attended Ohio University and moved to New York City to write. Ended up back
in Cleveland after a mini-nervous breakdown, which I did not admit I was having. Have lived here for almost two decades and am sick of it, sick of my friends, sick of writing for the same boring publications and sick of being in this rut and will probably move to Washington, DC to be with Terri Rubin, who I hate.

I hate Terri Rubin, the woman I'm in love with, because she has put me in this hideous mood. I was in a perfectly good mood about a half-hour ago, and then she called and told me she's dating a woman named Sonya, who has an apothecary store in Bethesda, Maryland. What's an apothecary store, anyway? Doesn't it sound pretentious? I hate this Sonya and I hate Terri and I hate myself because I was never like this in my life. You know what it's like to come out when you're in your forties, having menopausal symptoms, for God's sake, and then fall madly in love with someone? All of a sudden you're in adolescence
for the first time
. You don't recognize yourself. I was a cool, collected writer who strutted around in jeans and a leather jacket, advising friends and siblings about their relationships, being a devoted daughter and a responsible professional person and a good citizenâ well, except for not paying every dime of my taxes and having a couple DWIsâ but you know, being pretty much on top of things, and then B
AM
! I realized I was gay and a couple months later, this sassy girl strutted into my life and I fell in love at first sight. After spending my life thinking that never really happened and only watching
West Side Story
because of the gangs. And then I became the kind of person I had always made fun of, who falls into a murderous rage because her beloved tells her she's
dating some woman named Sonya, who has an apothecary store in Bethesda, Maryland. I'm sorry. I know I sound strident and . . . and . . . what's that word they always use to describe angry middle-aged woman?
Abrasive
. Yes. I'm sorry I'm being so
abrasive
. I'm just so upset. I'm just so upset. I don't know what to do anymore. For months I've just been sitting around in this apartment which used to be beautiful but I've let it go and it's filthy, and my cat died, and I'm not returning my friends' phone calls, and I pretty much stopped working because I couldn't write one more article about Life on the Streets or one more brochure for some airheaded nonprofit or one more newsletter for the Regional Sewer Districtâ yes, I'm serious, I wrote about
sewers
, but I stopped doing that too. I'm done with everything. Friends, family, work, housekeeping. My bills are piling up. I don't even know why I'm writing this. But writers write, writers write, writers write. Writers are idiots. Submitting themselves to torture. For what?

I need to stop carrying on like this. Sonya will be history in two weeks. Terri never likes any of these women she dates. She is critical of everyone, including me. God knows what she tells people about me. She thinks I'm nuts because I fell so hard for her and won't let it go even though she keeps saying she only loves me as a friend. I suppose she figured when she came here last year to visit her parents that she would meet this friend of Willi's who just figured out she was gay, “initiate” her, and then gallivant back to DC and leave the little de-virginalized wretch to “move on.” Move on! That's what everyone says. Well, Joanna, you need to M
OVE
O
N
! That's what
we do in this life! We get over our first big love and M
OVE
O
N
! We accept the loss of our first big purple-passion love, the one that made us burst like a rocket, the one that made us howl at the moon, the one that turned us into animals, and we M
OVE
O
N
and end up with a more
mature
love that we stop fucking after about two years and with whom our most exciting activity is discussing which cheese to purchase at the local Fancy Foods. Well, fuck that. I don't want to move on. I've only been young for two years. Why should I M
OVE
O
N
and find some companion and spend the rest of my life eating popcorn in front of the TV in my sock feet?

My mother just called right in the middle of this tirade and I was mean to her. I dissed Cleveland. I called it a pit stop. My mother thinks Cleveland is custard on a stick, and carries on endlessly about the Cleveland Orchestra and the Cleveland Playhouse and the beautiful fall leaves and the adorable way Minnie Minoso, who played for the Indians a million years ago, referred to Cleveland as “Cleeblands.” Now I feel bad. Maybe I should call her back and apologize.

Oh, the hell with it. I'm going across the street and getting some flavored cigarettes. I only smoke when I drink, and I'm going to drink. I feel like having a glass of the Chilean red they have over at the new wine bar and a cherry-flavored cigarette would taste real good with the wine. I'll get a nice buzz and realize that Terri's dalliance with Sonya what's-her-name is just a drop of piss in the wind.

That was a good idea. The wine settled me right down. I
do like that little bar on Coventry Road. I must have the vestiges of alcoholism from when I was a young maniac whose life revolved around rum and cokes, because even though I don't drink that much anymoreâ well, maybe only once or twice a weekâ I still get that
thing
that alcoholics describe when I have my first drink, you know, like Oh, so
this
is real life,
this
is why I'm alive. And now I realize why I love Terri. Because she's so damn sexy with her sashaying walk, and because she's wickedly funny, she's affectionate and fun, she's out and proud, and most important, she has a sweet caramel-colored neck that compels me to kiss it every chance I get (she looks like a light-skinned black girl with her dusky skin and soft kinky hair, but she's really Jewish). I know that many people such as most of my friends and my sisters and brothers and her ex-lovers and a lot of
her
friends do not share my rapture over her and, in fact, think she's an evil bitch, but that's not a well-rounded assessment. (She would be very insulted if she read this. Maybe I should take it out.) See? This is the problem. I'm a wimp with her, always afraid of what she's going to think, and that's why she doesn't want me. Well, no, she doesn't want me because I'm not one of those trashy vamps in tight skirts and high heels, those high-femme women who Terri thinks are such hot babes but are really just neurotic whores. Most of those women aren't even gay anyway; they're just sick of men and are fooling around with women as a temporary distraction. I wonder if Sonya is like that.

But I digress. What I was saying was that I don't fit Terri's image of the ideal girlfriend. I'm on the femme
side but I favor jeans and sensible shoes and I don't wear makeup except for lip gloss, and in my younger days people would tell me I looked like Mick Jagger, but now I just look like my mother. Anyway Terri is searching for someone different, someone who not only is a high-femme tart but who doesn't pour herself all over her like I did, but for God's sake, I was just coming out! I know I poured myself all over her, and then when she finally said she didn't want a relationship with me I hounded her like an overwrought child pursuing one of the Beatles, and now I regret behaving like such a ninny. But how absolutely divine it is, to experience your first love! I'll never forget the joy of meeting her. I was already all keyed up from having realized I was gay a few months before, and then Willi called and said her former social work volunteer that she'd been telling me about was in town and she arranged for us all to meet at the Mardi Gras Lounge and I walked in there with my friend Ann and this sexy Jewish girl sitting across from Willi flashed me a white-toothed grin and my outer layers just seared off. Even if I had known she was just seducing women to quell the pain of a broken heart, it wouldn't have made any difference. I blushed and giggled while she sat in the Mardi Gras with her arm draped over the booth behind me, flirting like mad, calling me a “hatchling” because I had just recently come out, picking up a lock of my hair and saying, “How can you
see
through all this?” She swaggered to the bathroom and I watched her sashaying butt in a grinning, stupid trance while Willi and Ann looked at me in amazement because they'd never seen me that way before. I asked her to go out to dinner with me and the next
evening we went to a Chinese restaurant and afterwards she kissed me in the car and suddenly I saw myself in every romantic movie or ad or billboard, every song sung by anyone named “Frankie” that I'd ever heard, and soon thereafter she succumbed to my advances and I lay naked in bed with her and ran my palm through her coiled hairs and she whispered, “See how wet my pussy gets when you touch me down there,” and finally I knew what the fuss was all about. Oh stop crying, Joanna.

Murder in Ukraine by Dan Spanton
How Many Friends Does One Person Need? by Robin Dunbar
The House by Princes Park by Maureen Lee
Hannah Coulter by Wendell Berry
The Warlord's Domain by Morwood, Peter
Commander Bear (Bear Shifter Paranormal Romance) (Bear Patrol Book 1) by Scarlett Grove
Christmas in Vampire Valley by Cooper, Jodie B.
Captain O'Reilly's Woman - Ashes of Love 1 by Gwen Campbell
The Silver Anklet by Mahtab Narsimhan
Seth by Sandy Kline
Our partner